Well Canadian gun owners, after what feels like an eternity of political repartee, we have some good news: There’s a handful of new firearms headed our way and there’s something for everyone in the mix. 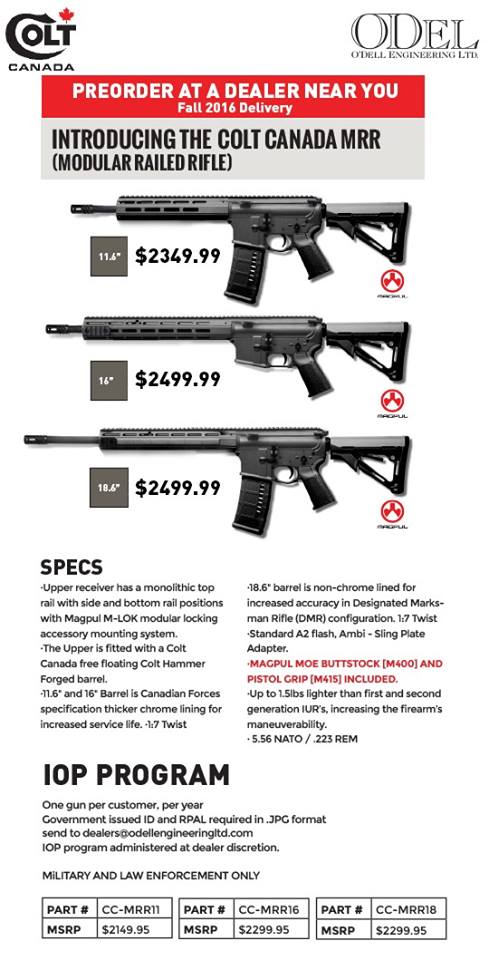 First up, the Colt Canada MRR is set to make its sales debut shortly, with the first three models offered being the 11.6-, 16-, and 18.6-inch variants. As referenced in previous previews and reviews, the 11.6” and 16” models both feature conventional Colt Canada hammer-forged, chrome-lined bores while the 18.6” DMR model does not have the chrome lining. The lack of lining makes for a more accurate barrel. Although the attractive cerakote finish of the models previously sampled has gone by the wayside for production, the commercial rifles will come with Magpul stocks and grips, while the MRR integral handguard features M-Lok modular mounting slots. Prices for the 16” and 18.6” rifles are the same at $2499 each, while the 11.6” model is a bit cheaper at $2,349. All rifles are built entirely at Colt Canada’s Kitchener factory and feature Colt Canada internals, bolts, carriers, and triggers. 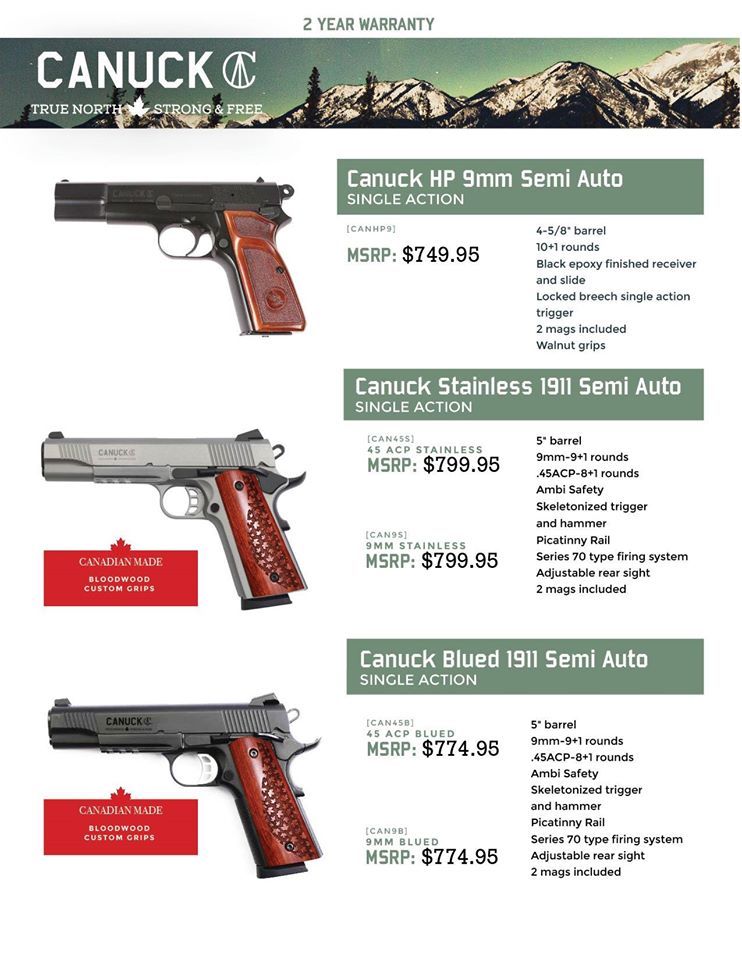 Also from O’Dell Engineering Limited is a new line of Turkish-made handguns. Imported under the Canuck brand, these pistols will be available in two familiar formats, full-size blued and stainless 1911s in .45 or 9mm, and one surprising and welcome one; a Canuck Browning Hi Power clone. Made by the Turkish firm Tisas, all three pistols have been available in other markets for some time, and have been well received and purported be of a good quality. The Browning Hi Power clone is probably the most interesting of the trio, especially as it seems to mirror some of the earlier Hi Power formats out there, with a commander hammer and un-extended, non-ambi-dextrous safety. The Hi Power comes with Tisas’ walnut grips, while the Canuck 1911s feature made-in-Canada bloodwood grips with a unique maple leaf grip texture engraved in each panel. Prices are attractive, too, with the Hi Power coming in at $749, the stainless 1911 at $799 and the blued 1911 at $775.

Finally, we have the Troy PAR, or pump-action rifle. This rifle, which looks very similar to an AR-15, is actually a unique design unto itself that shares nothing with the actual AR-15 in its operation, and as such has earned a non-restricted classification. The upper and lower receivers are unique and entirely incapable of being joined to an AR-15 receiver, and the action itself is obviously dramatically different; using a forward grip panel around the handguard to serve as a pump to cycle the action. Available in .223 Rem, .300 Blk, .308 Win, 7mm-08 Rem, .243 Win and .338 Fed, there’s a wide array of models, and although not all may be available in Canada, it is undeniable that these will be popular among big game hunters and varmint shooters alike. Interestingly, rifles destined for the Canadian market will be the non-export variety, meaning they will use conventional AR-15 magazines rather than a proprietary magazine designed by Troy for use in markets with different magazine laws. Weighing six pounds and by most accounts quite accurate, and prices are surprisingly good; the .223 and .300 models start at $999, while the .308 and .338 models are $1125. A special edition of the .338 rifle finished in Mossy Oak tops the range at $1469. All are available from Troy’s Canadian rep, Rampart International. 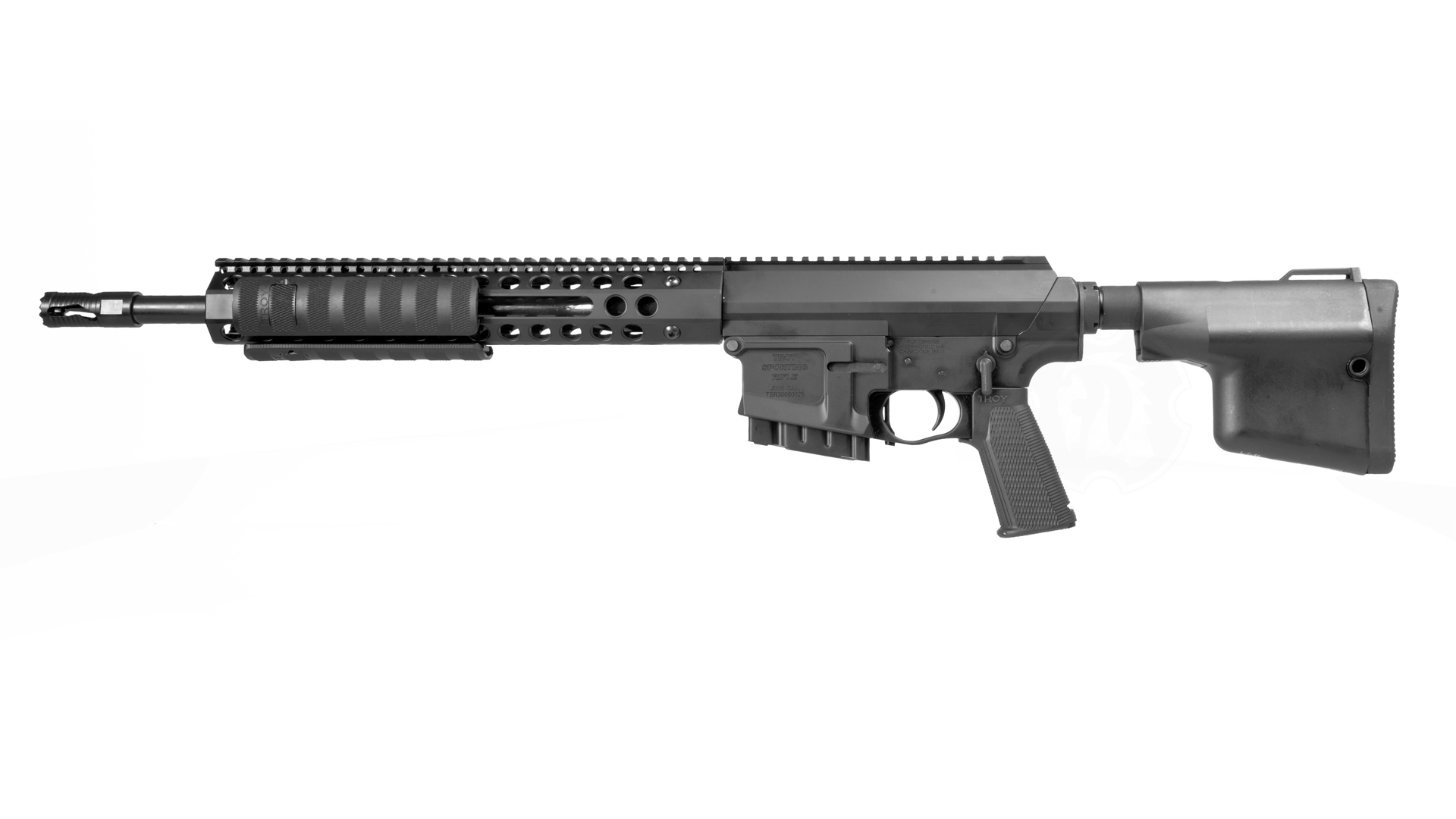 All these firearms are currently on their way to the Calibre office for testing in future issues, and we’re very excited with what we see. We’ve barely been able to contain our excitement over the MRR, and we’ve had the unique opportunity to follow that rifle’s development from day one. The Canuck pistols offer a great value for the dollar and bring some unique features to the table, but we expect it’ll be the Hi Power clone that really sets itself apart in that lineup. Affordable and easy to shoot, it’ll be one of the most affordable steel-framed pistols on the market, and the Hi Power pistol looks to be making a resurgence across the market anyway… this gun could give buyers a great way to enjoy a Hi Power without paying (what we think is) the relatively exorbitant price Browning themselves demand. And finally, the Troy PAR; we always welcome a new non-restricted black rifle on the market, especially one so firmly targeted towards the hunting crowd. We’ll be uploading more information and our own images as soon as they all arrive!