THE WOMEN OF SHOT SHOW

In the past “Women of SHOT Show” might have conjured up an image of booth babes decked out in handkerchief-size swatches of camo and not much else, brandishing guns with a suggestive smile in an attempt to lure SHOT Show goers into a booth.  Perhaps that’s still what you were expecting to find when you opened this article. However, the transition of women within the firearms industry from props and eye candy to consultants and decision makers is a good one for everybody because it’s going to help get more women involved in shooting, period. Yeah, the new girl that starts showing up at the range might not be a professional model wearing a camo bikini, but maybe (thanks to a female design team) she’s wearing the new 5.11 Raven capris. And, like I said, that’s good for everybody.

This year, as in past years, women continued to expand their presence in marketing and sales roles on the SHOT Show floor. This isn’t a huge surprise, as women do quite well in marketing, PR and sales outside of male-dominated industries, so this is a pretty natural progression. In my post-SHOT, back-of-the-envelope, totally-unscientific estimation, I would say at least 75% of the booths we visited had women working in one of these capacities. While it’s still less common to see women outside of these areas, there are some companies where women are branching into other areas, a few of which I’ll mention below. 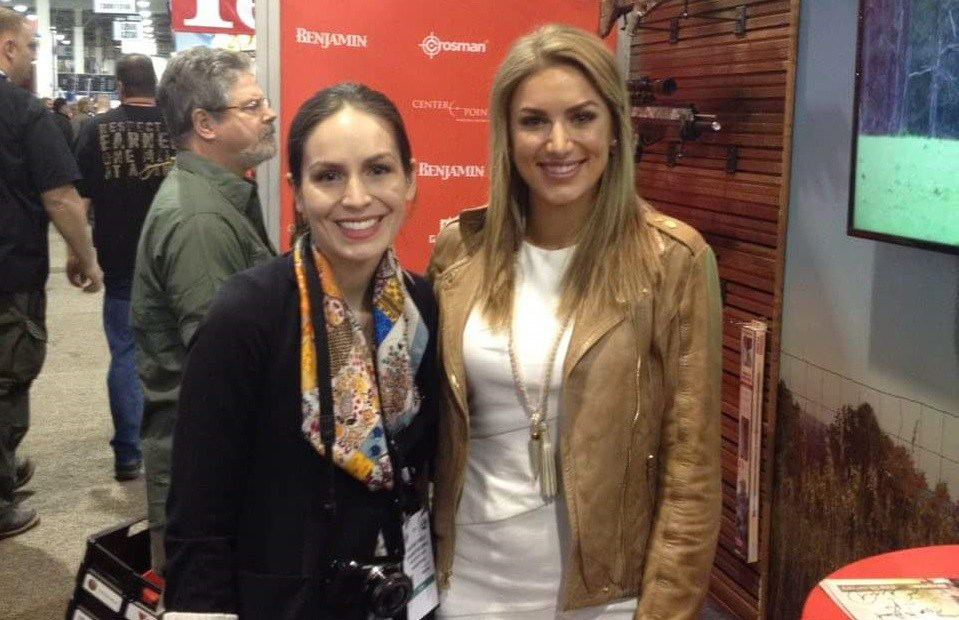 Calibre Magazine with Eva Shockey (above right), an avid hunter, spokesperson for numerous firearms and outdoors apparel brands and collaborator with Crosman airguns, as well as a fellow Canadian!

Women in the firearms and tactical apparel design world

There are several female-led teams within the industry that we want to highlight here, the first being Remington Outdoor Company. Remington Outdoor Company has a female Senior Vice President of New Product Development and Innovation, Virginia (Ginger) Chandler, a fact I learned from Jessica Kallam, who manages Remington’s female initiatives program.  To be fair, Ms. Chandler has also previously worked as a VP of New Product Development for Smith & Wesson. As part of its female initiatives program, Remington engages with female firearms enthusiasts in order to learn more about their specific needs. The company also hosts events and supports causes that get women involved in shooting sports.

Another company I’d like to draw attention to is 5.11 Tactical – not that they need it. 5.11 made the decision to put some (sorely lacking) emphasis on women’s tactical apparel, developing a full line of apparel and accessories (well, almost – we’d still like more women’s boots!) and having these products designed by women. I can’t tell you what a difference this makes. However, when you look at the interest these products are generating among women, I think it becomes apparent. Seriously, if you are a guy reading this article and you want your lady to come shooting with you, try floating the 5.11 Women’s Stryke pant, Raven pant or Raven capri past her. Honestly. After seeing the Raven pant/capri in person at SHOT, they feel great and the women wearing them had nothing but great things to say. Needless to say, we’ll be doing a full review as soon as we can get our hands on a pair. 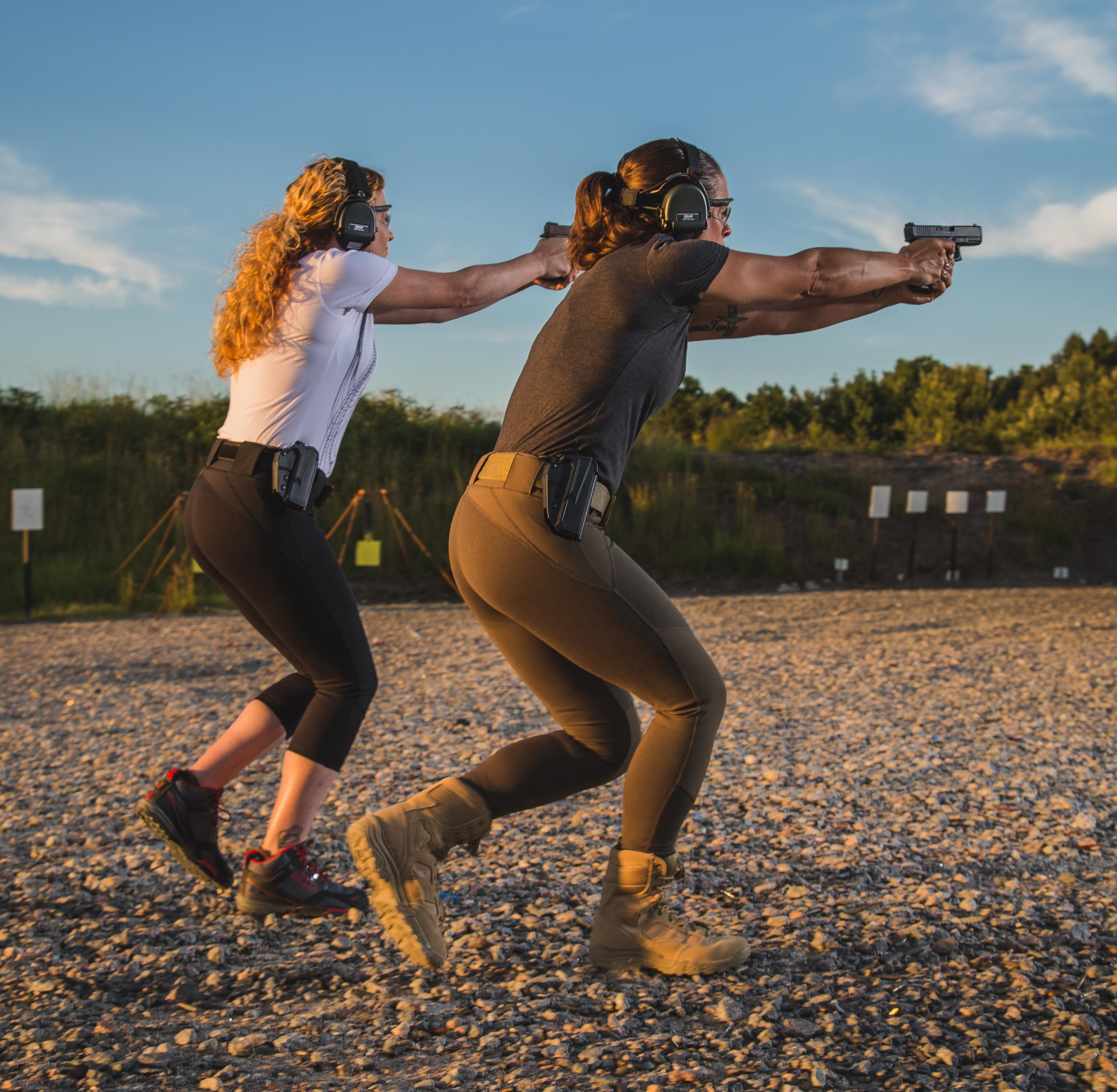 The 5.11 Tactical women’s Raven capri (pictured above left) and Raven pant (above right) blend the comfort of a yoga pant, the aesthetic appeal of a sleek fit and the functionality that 5.11 is known for.

Women in the firearms media

It’s undeniably great for women to be involved in the business side. Without that, women are unlikely to get products that truly meet their needs. (Really? You didn’t just want them to make it pink?!) However, without women also getting involved in the firearms media business, it’s hard for these developments to get the coverage they deserve, so that the end users know about them, buy them, and reaffirm those business decisions. I’ve heard way too many times that there just isn’t a market for women’s “fill in the blank” (boots, gloves, glasses, stocks, etc.)

So, with me as the new and lone (for now) female writer, Calibre will be introducing more women’s content. This will be the first of many general interest articles and reviews that cater to female firearms enthusiasts, from the seasoned shooter to those who have never held a gun, but are interested in learning more. However, in the interest of building this community, I’d love to share one of my favourite resources – Sure Shots magazine. This free online publication is based out of Texas, so some of the content won’t be applicable to Canadians. However, they have some great articles, drool-worthy photo-spreads and are a super-friendly group of women dedicated to growing the shooting community. They recently billed themselves as “Where Recoil meets Vogue”—what’s not to like? 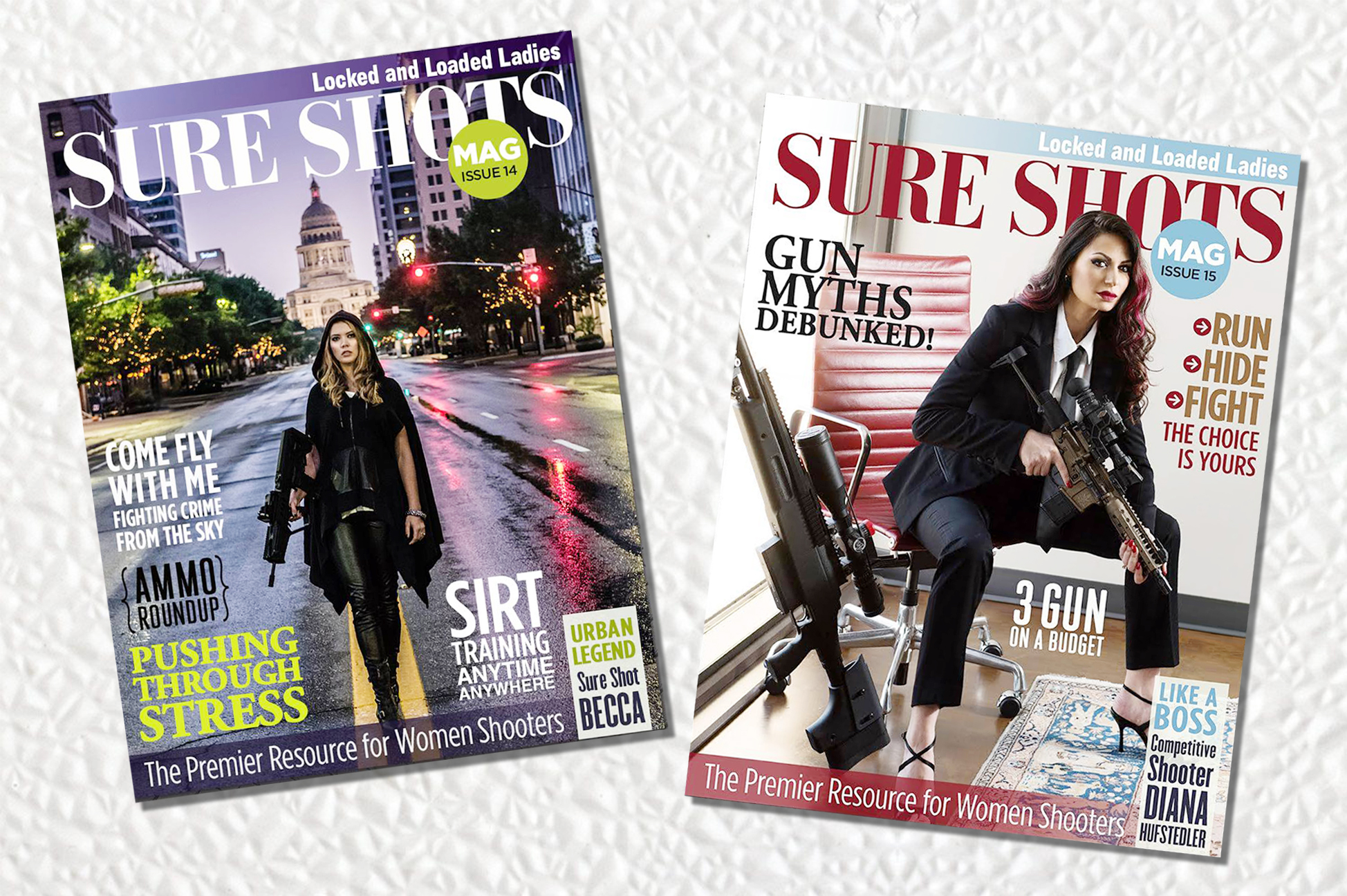 The covers from the latest Sure Shots issues feature a Sure Shots staff member (above left) and Diana Hufstedler (above right). Each issue is packed with female-centric product recommendations, instructional articles and stories.