Imagine a Winchester shotgun that sold millions of units.  No, not the 1200; this one served in two world wars and was in production for half a century.  No, not the 1897.  This is the gun the 870 was built to compete against.  Wait, how did we forget about the Winchester Model 12? 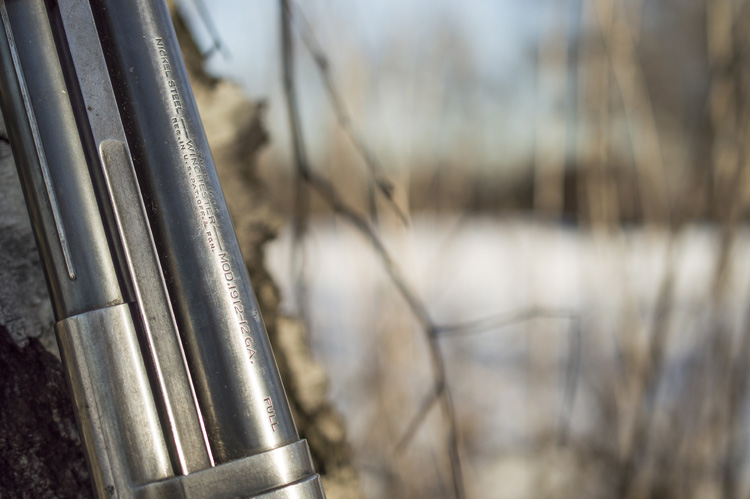 Once billed as “The Perfect Repeater,” The Winchester Model 1912 went out of regular production half a century ago, although occasional manufacturing runs get started up, most recently in 2006.  An elegant weapon from a more civilized age, the 12 was Winchester engineer Thomas Crosley “T.C”. Johnson’s revision of the iconic M97, designed by the man himself, John Moses Browning.  T.C., who created some of Winchester’s greatest firearms of that era such as the 1903 and 1905, which were the first commercially available semi-automatic rifles in rimfire and centrefire respectively, wanted to develop a hammerless shotgun to compete against new designs from Remington and Savage, both of which sported the sleek and modern hammerless profile.  The Winchester Model 1912, later shortened to the Winchester Model 12, was his masterpiece.

The mighty Winchester Model 12 was initially available only in 20 gauge, with two and a half inch chamber, a 25 inch barrel and a six-round tubular magazine.  Within two years, both 12 and 16 gauge versions were available and by the end of the 1920s, the receivers had been stretched to accommodate up to three inch magnum shells, although the majority of Model 12s were built for the standard 2 3/4 inch hulls. 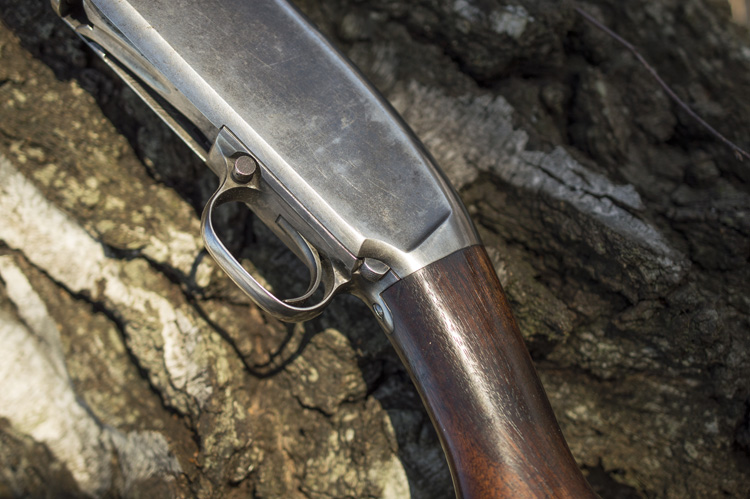 Not long after production began in earnest, the world outside the United States found itself engulfed in a brutal and horrific war.  When the American Expeditionary Force joined the action in 1917 under the command of the legendary General “Black Jack” Pershing, they brought over a million Winchester shotguns with them, although the overwhelming majority of these were the older Model 1897s.  Still, the upscale 1912 made its combat debut here as well, with a contribution of twenty thousand guns, in trim very similar to the 1897: a shorter, twenty inch barrel, a heat shield, and a bayonet lug.  Much like the 1897, the new machine had no trigger disconnector, so the gun could be operated simply by holding the trigger down and cycling the slide, firing as fast as the operator could pump.  While not an especially useful feature on a sporting shotgun, in the context of trench warfare it was highly desirable and the Germans facing the new and terrifying weapon found it so effective that in September of 1918, they lodged an official diplomatic protest against the Americans for employing it, claiming that the use of the shotgun constituted a war crime.  The objection was noted and investigated, but rejected by the Americans who continued to use the 1897 and 1912 Winchesters to devastating effect.

The end of the war saw a surge in American prosperity generally, and the 1912 with its sleek receiver machined from a single steel forging and its hand-fitted, machined parts, was a desirable item.  Production expanded and by 1927, it was available in gauges from 12 to 28, and the blunt 20 inch barrels of the military version had been traded for sporting barrels (still proof tested and made from high quality nickel steel) ranging from 26 to 32 inches in length, and available not only with a bead sight but also with both solid and vented ribs.  There was even a stainless steel edition released by the end of the 1920s, and a bewildering array of trim levels were built including Field, Fancy, Skeet, Trap, Pigeon, Tournament, Featherweight, Heavy Duck Gun, Trench Gun and eventually Riot Gun.  The upper levels of these trim packages were true works of art with hand checkering, engraved receivers and jewelled bolts.   Common to all of the Winchester Model 12s, however, was the incredible trigger feel achieved through the hand-fitting and polishing of the internal parts. 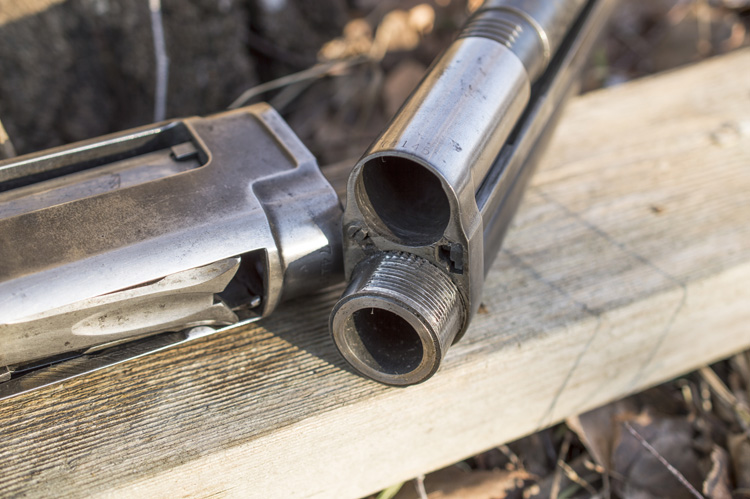 And the quality of the Winchester Model 12 wasn’t only a matter of superior manufacturing techniques, although the decision to machine every single metal part rather than include a single stamping certainly didn’t hurt.  But the design itself is not just robust, the receiver being absolutely monolithic, but in many ways functionally superior to modern equivalents.  The cross-bolt safety, for example, is found not at the rear of the trigger guard, but at the front, and operating it is intuitive and causes the user to automatically adopt good trigger discipline by running the safety with an outstretched index finger.

By the end of the 1930s, with the Great Depression in full swing, production had slowed but things were about to change: with the rest of the world once again at war and American manufacturing ramping up to supply the combatants, the economic tides were already shifting when the United States found itself dragged into the war by the Japanese bombing of Pearl Harbour.  Suddenly engaged once again in brutal close quarters combat, this time in the jungles of the South Pacific, the Winchester Model 12 again became an indispensable tool, used in all branches of the US military but finding its true purpose with the fabled United States Marine Corps.  Winchester supplied the nation with 80,000 Model 12s, mostly in the familiar Trench Gun configuration of the First World War, but also in the new Riot Gun trim, which simply deleted the heat shield and bayonet lug, and was issued to security personnel working on American bases and in American-held ports. 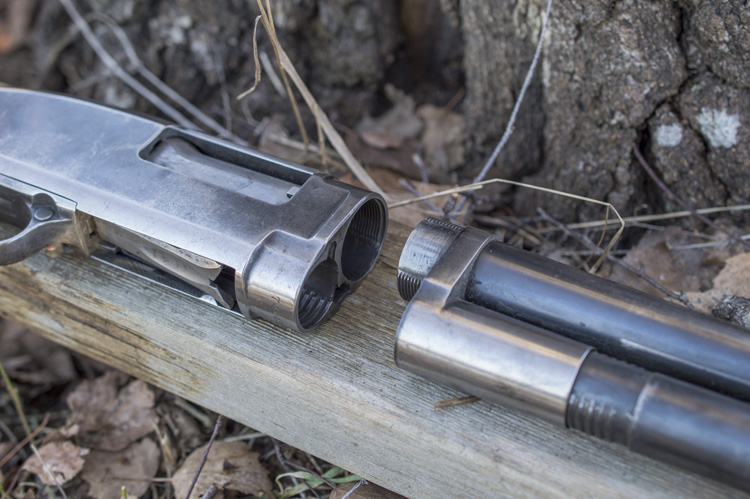 At war again, the smooth operation and reliable performance of the Model 12 combined with the raw power of 12 gauge shells delivering either buckshot or slugs made it a choice weapon for clearing the tunnels that served as hardened positions for the Japanese troops occupying Pacific islands.  This functionality served no less in the Korean War, in which the reliable M12 was again revived, many thousands of the venerable pump guns having remained in the American arsenal after the end of the Second World War.  The Model 12 was particularly effective against the Chinese “short attack” (mistakenly termed a “human wave” attack by mainstream journalists) as it brought the Chinese soldiers very close, but in dispersed groups, limiting the effectiveness of longer range weaponry and forcing the American G.I.s to fight nearly toe-to-toe with large numbers of Chinese troops.  At this necessarily close range, of course, the scattergun was devastating.

Similarly the Model 12 saw yet another tour of duty in the earlier years of the Vietnam war, where once again the close quarters combat of the jungle environment made the shotgun an effective weapon.  But the M12’s years in service were rapidly drawing to a close, and the unit most commonly associated with the use of shotguns in Vietnam, the Navy SEALS, moved away from the Winchester and began to rely on the Ithaca Model 37, favouring it in part because its quirky bottom-eject feature made the receiver quite resistant to contamination.  The Model 37, incidentally, was based on yet another John Moses Browning design, which made it into production as the Remington Model 17.  The Ithaca Gun Company, searching for a design to compete with the Winchester Model 12, waited for the patents on the design to expire, and put it back into production in 1937. 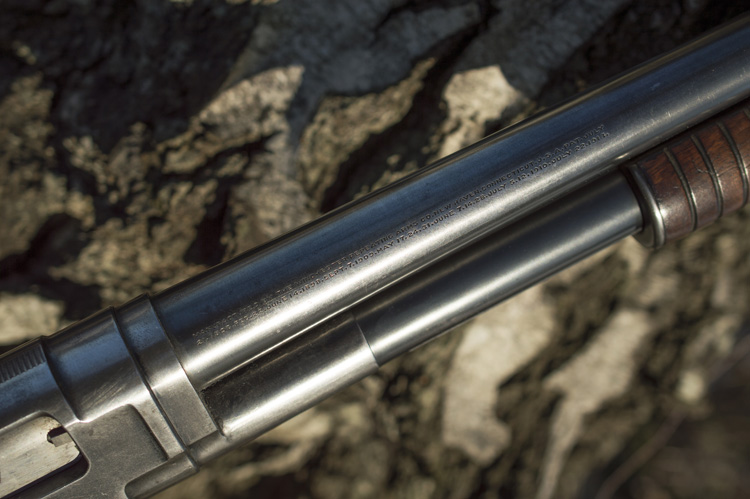 And as the Winchester Model 12s were damaged or lost (they essentially never wore out from use), the US military had less and less interest in replacing them with the same guns, for the same reason that would ultimately spell their demise in the sporting market: the craftsmanship that made the Model 12 what it was required a whole lot of very expensive skilled labour.  That translated to a high organizational purchase cost, and a high retail cost.  In 1956, for example, a base-level Model 12 Field with a plain barrel cost $93.85 US; a ribbed barrel version $110.35.  The Pigeon grade VR Trap gun had a base price of $259.50.  Those prices sound impossibly low to us today, but consider that a basic Remington 870 retailed at that time for $77.30, and had a substantially higher profit margin than the Model 12.  Granted, the 870 was made with efficient, cheaper methods, and it showed.  But nobody has ever argued that the Remington doesn’t work well.  It’s a highly functional shotgun and debuted with 15 different editions that impressed plenty of hunters and sportsmen, and the Winchester Model 12 began to languish.

By the 1960s profits on the Model 12 were no longer sufficient to justify its continued manufacture, and regular production was ceased in 1964.  Adding insult to injury was the fact that not only was the Winchester Model 12 pulled from the product line, it was supplanted by the Model 1200, a shotgun technically derived from the Model 12 but cheaply built and the inferior of the great 12 in every way but one: profitability.  The quality of the Winchester Model 12 had been so thoroughly established in the minds of generations gun owners, however, that small batches have been built on occasion ever since, and as such, parts are still fairly readily available.  All of the Model 12s made after 1972, however, include stamped parts which, while functional, do take away something from the all-machined, hand-fitted perfection of the pre-1964 examples. 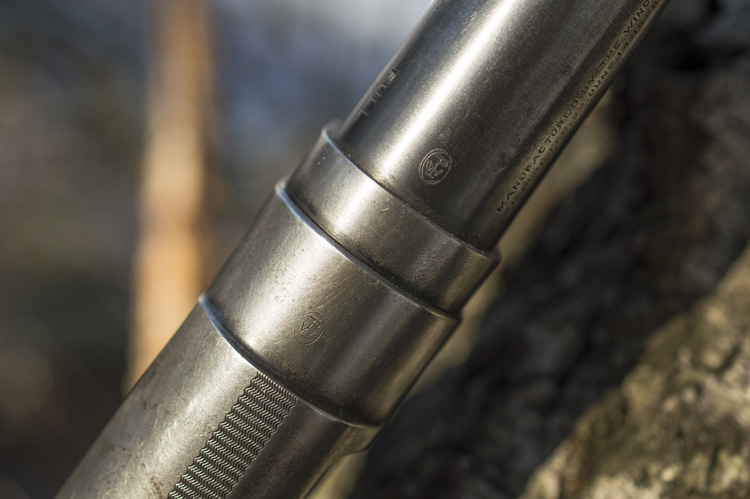 As of this writing, it’s been eleven years since the last batch of Model 12s were built, and we’re not aware of plans to restart production.  But the fact that two million units were produced means that used versions aren’t too difficult to locate, and prices for the most common models, which were the long-barreled, full-choke 12 gauge Field grade guns, aren’t excessive and as long as there’s no play between the barrel assembly and the receiver, it’s nearly impossible to wear one out.

In recent years, prices for military versions (readily identified by a “shell and flame” stamp on the barrel just forward of the receiver) have gone sky-high and the more unusual guns (in particular the 28 gauge and the .410) in higher grades are also worth quite a bit of coin, but shooter-grade 12 gauge guns are still selling for a few hundred dollars.  These days, when a brand new shotgun can be had for similar money, that might be a tough sell for a lot of prospective buyers, but trust us when we say that if you’re young enough to have grown up in this era of stamped-steel offshore-built guns, a Model 12 in decent condition will seem positively otherworldly.