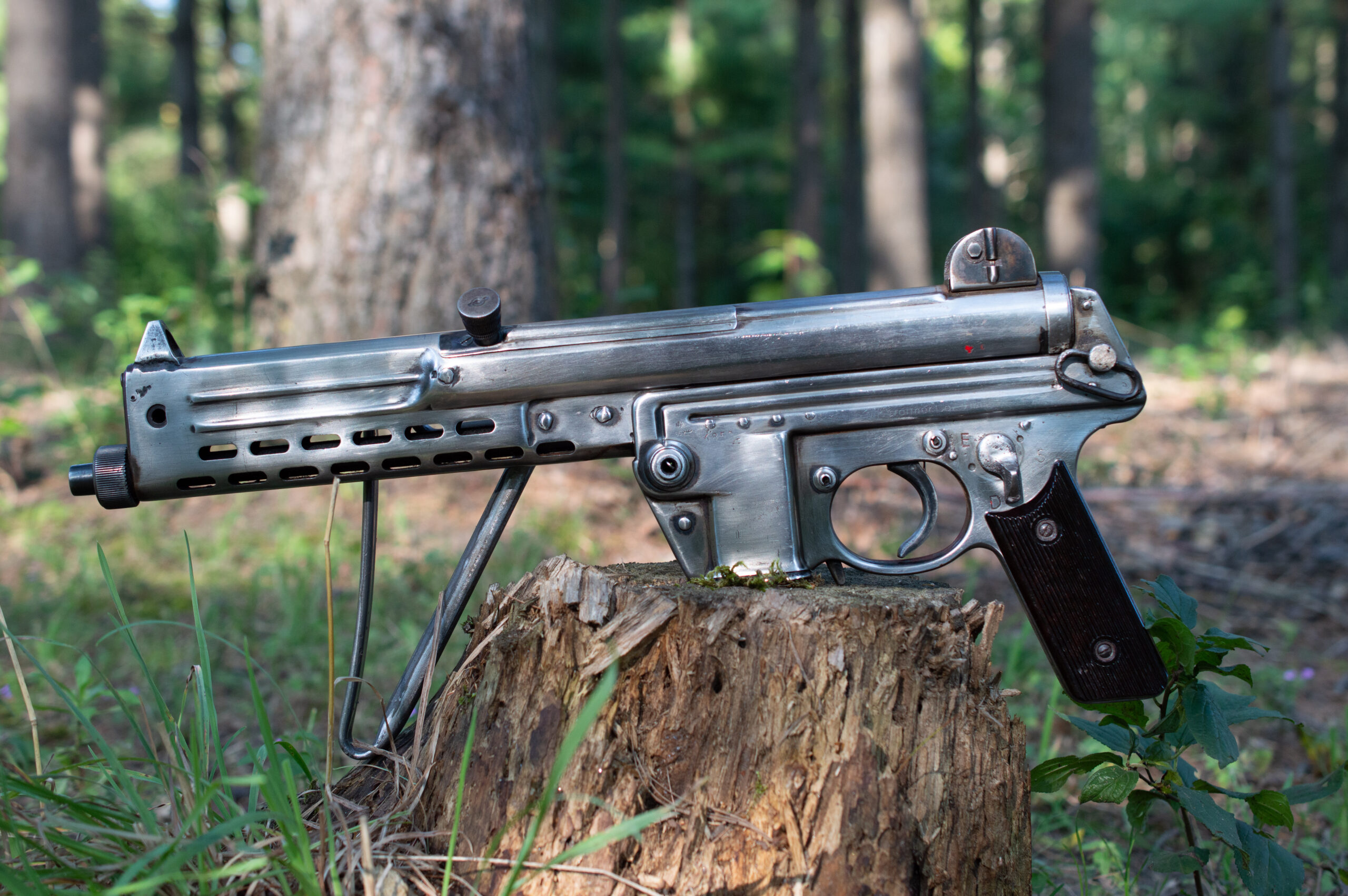 While its roots can be traced back to 1780, Walther GmbH was officially founded in 1886 in the present-day town of Zella-Mehlis in central Germany. At its inception, the small workshop designed and manufactured quality rifles for which it would earn notoriety amongst hunters and 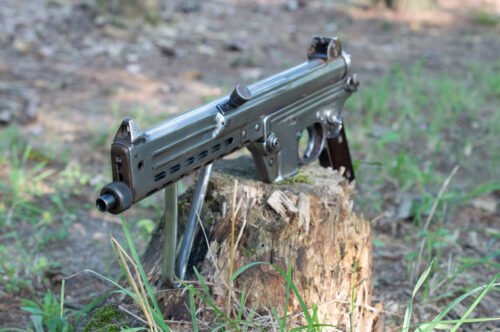 sport shooters of the day. Around the turn of the 20th century, with the advent of self-loading firearms and, later, the commercial success of Hugo Borchardt’s C93 pistol, Walther deviated from their norm and began working on semi-automatic pistol designs with some variable success.

By 1929, Walther had its successful design and introduced the PP (polizeipistole) and, a year later, the variant PPK (polizeipistole kriminalmodell). Both proved popular, dependable, and were available in several different calibres with continued production and service even today. For its part, the PPK is noteworthy as being the first mass produced stamped steel pistol in history.

Walther would replicate the successes of the PP and PPK in 1938 when they designed a series of prototypes which culminated with the P38. Whereas the PP and PPK used an unlocked blowback design with a double action, the P38 would exemplify Walther’s creative potential and differ with a double action/single action coupled with a locking breech; seeing it to be the first of its kind to combine these two features in wake of its use of the 9mm cartridge. By 1939, the Nazi government had chosen the P38 to fully replace the P-08 Luger as its standard sidearm for the Wehrmacht during the Second World War.

While this proved fruitful for Walther, the company existed on a slippery slope and saw the use of slave labour courtesy of individuals interned at a work camp in Germany. Unsurprisingly, the fallout of the Second World War was unkind to Walther’s operations. Its factory was destroyed and the German state of Thuringia, where Zella-Mehlis is located, fell into the Soviet occupation zone. Walther was reduced to a company on paper only and sought to re-establish its operations in Ulm, West Germany, where it did so in 1953. Though still intent on manufacturing sporting rifles, Walther saw its best chance to build financially in the civilian law enforcement segment where contracts were sought and won via a renewed production run of the P38 (later re-designated the P1) and the PPK. In short time, Walther had secured contracts with the most significant of such coming in 1957 to equip officers of the Bundeswehr with sidearms.

The company apparently secure, Walther sought to capitalize on further procurement contracts brought forth by a political landscape no more evident than post-war Germany. But instead of making another better pistol, Walther decided to build on their innovative prowess and proven engineering strengths; thereby deciding to develop a sub machine gun when West German police agencies sought examples for evaluation and eventual procurement. The firearms developed was the MPL and MPK. 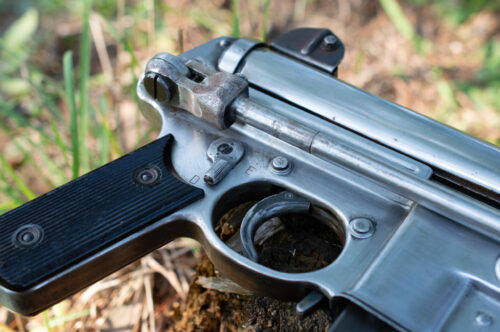 The foundation of this sub machine gun would be simple and quintessentially German: a blow back, tubular, stamped steel receiver running an open face bolt and fixed firing pin chambered in 9mm. It was a design principle for the proven MP18 of yesteryear, which (more or less) exists as the basis for most all German SMGs. With some specific changes, the result would be a relatively cheap weapon to manufacture, uncomplicated, and inherently durable: The recipe of success for government procurements – usually, anyway.

The most obvious deviation was for the bolt assembly itself where Walther went in another, very unorthodox direction from what was seen in other contemporary sub-machine gun examples such as the CZ Sa vz. 23. These firearms were the first to utilize telescopic bolts designs to shorten the length of the bolt assembly and its action because of its ability to have the bolt assembly overlap the barrel during the firing cycle. The benefit here was its shorter throw which allowed for a reduction of the overall length of the receiver itself and thus allowed for longer barrels on the firearm without a compromise its overall, relatively compact design.

As for the unorthodox short bolt design, Walther did away with a telescopic bolt and instead created a bolt assembly which would reciprocate parallel to the barrel. Walther did this by moving the primary mass of the bolt assembly above the barrel with a steel block fixed below the primary bolt mass with the bolt face, fixed firing pin, and extractor in place.

This unique bolt assembly was that of a cast metal cylinder with matching, machine finished bearing rings on either end to allow for travel inside the tubular chamber section of the upper receiver. This chamber is what gives the steel stamped Walther MPL its distinct appearance in contrast to Heckler & Koch’s MP5 and other contemporary SMGs, which too were in development around the same time and largely stuck to telescopic bolts.

As advertised, the assembly is quite simple, and the weapon is broken into two parts via its forward takedown pin near the magazine well. The upper receiver houses the bolt assembly, its channel, the chamber, and the Uzi like barrel design. The 260mm barrel (173mm barrel in MPK) itself is air-cooled via a ported hand guard and can be removed by depressing a locking button which will allow the keeper nut to be unscrewed. Furthermore, the barrel is keyed to ensure that the feed ramp and extractor notch are in the correct position on reassembly.

On top of the upper receiver is a spring-loaded cha 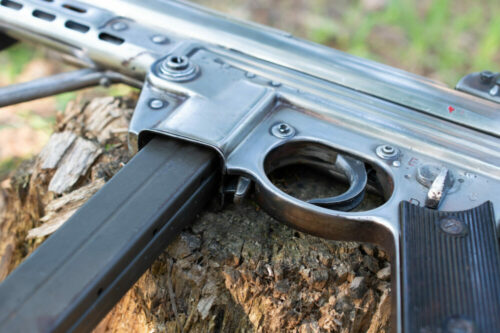 rging handle which can be manipulated to capture the bolt assembly and does not reciprocate during the firing cycle. When the handle button is depressed, a notch is pushed into the assembly and allows the operator to move the bolt forward or aft as need be to clear stoppages. Finally, the Walther MPL employs a two-sight system which are effective to a range of 200m not seen on the MPK on account of its shorter effective firing range. The MPL employs gutter sights for general aim and a front sight post and aperture sight at the rear for aimed shots.

The lower receiver houses the fire control components with a typical open bolt sear type fire control group, the trigger assembly, pistol grip, a three position (ambidextrous) fire selector switch, and magazine well where Walther’s proprietary double stacked 32 cartridge magazines are seated. Compared to other SMGs, the Walther MPL is comparatively simple and this assembly itself can be removed from the receiver via two retaining pins above the trigger.

Though not as strange as the bolt, the fire selector switch is a bit of an oddity in that it sequences from a safe, to full auto rated at 550 rpm, and then to semi-automatic; doing so by manipulating the sear in a manner standard of most designs. In addition to the safety, the MPL employs a secondary safety sear which is designed to catch the bolt assembly during unintended rearward bolt manipulations. This is to prevent it from extracting and chambering a cartridge when the bolt is forward which, due to the fixed firing pin, could result in a negligent discharge when the bolt was pushed back forward. Finally, the firearm is complete with a rubber coated wire stock mounted on a locking swivel, which allows for it be folded to right side of the receiver.

As mentioned earlier, Walther developed the MPL in the late 50’s into the early 60’s with its final product proving to be a solid firing platform as far as sub machine guns go. Due t 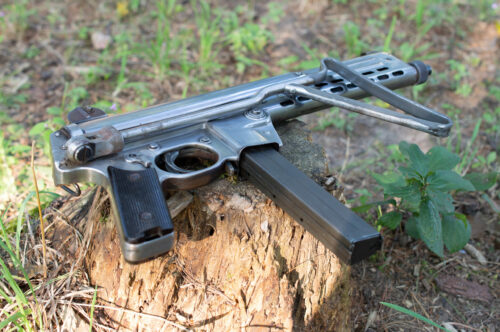 o the bolt assembly mass, the MPL fired considerably slower than many of its contemporaries. This should not be taken as a detractor as it gave the Walther MPL a stable and highly controllable firing platform when fully automatic. Taking this into consideration and coupled with its simplicity, dependability, and low-cost manufacturing process one couldn’t be faulted for assuming that it would see considerable success.

However, this wasn’t the case. Despite a production run from 1963 until 1985, Walther saw limited sales to local police and some foreign countries, missing out on a multitude of procurement contracts which saw the MPL thoroughly outpaced in terms of both domestic and international sales by the H&K’s. The why is a bit of a mystery as it could be reasonably assumed that there would be a desire for simpler designs to the MP5. Cost management and ease of upkeep would be the obvious benefits of the MPL without a significant sacrifice in performance. But be it as it were, the Walther MPL was doomed to a largely anonymous existence in the shadow of the MP5.

As such, and due to very few MPL’s ever being sold in North America, it exists as a particularly rare gun to find in Canada. But exists it does. An example of the Walther MPL is now apart of the extensive and impressive collection of the National Historical Firearms Museum and how that came to be is an interesting story by its own right.

As for Walther, the company soldiered on and remain active manufacturing service pistols, the impressively cool WA 2000, and sport air rifles. Presently, the company continues to operate under the Walther brand under the parent company, PW Group, after previous acquisition by Umarex Sportwaffen in 1993.