A few years ago, a new and enterprising rifle manufacturer eased their way into the Canadian gun consciousness from the rolling hills of Chilliwack, British Columbia, under the name of Ultimatum Precision. Unveiling their first action; the U300, back in 2016, Ultimatum’s first effort was not to be, with overly heavy bolt lift issues plaguing the U300’s production. Some guns were sorted out in the field through design revisions, but eventually the plug was pulled, and all orders refunded with a promise of discounted pricing on the pending Ultimatum Deadline for all those that had placed an order. 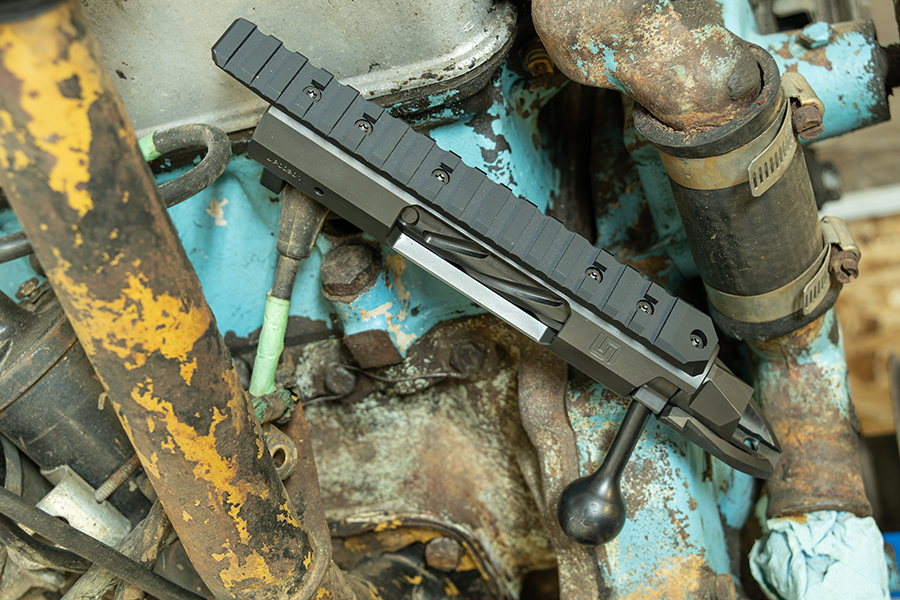 Intended to both fix the U300’s overt failings and bake in a handful of additional features to improve the design, the mix of the Deadline’s design promises and Ultimatum’s customer service stickhandling ensured a healthy supply of Deadline orders, and today Ultimatum offers the Deadline in right- and left-handed variants, in both long- and short-actions, and in either repeater or single-shot formats. And we’ve been pining for one ever since we heard it was replacing the defunct U300.

And this is it, albeit in short-action, left-handed, repeater form (so specified by yours truly). So what do you get when you throw down the required $1,500 Canadian Pesos for one of Canada’s newest rifle designs? Well, to be frank, a surprisingly small but heavy black box containing the Deadline action, a bolt body, a bolt head, and all the bits you need to get it up and running… including both a unique Ultimatum barrel nut, barrel nut wrench, and action wrench. It’s all nicely packed in cut foam, and came with a pair of Ultimatum stickers and the obligatory Ultimatum patches, of course. Although obviously unassembled, the action isn’t shipped completely bare; Ultimatum goes through the effort of assembling the bolt for you, as well as affixes a rail to the action, and installs the bolt stop/release.

Beginning with the receiver itself, there’s a lot to take to in, and it generally begins with the initial assessment that this thing is beefy… very, very beefy. In fact, the bare receiver alone weighs in at a whopping 646 grams (1.42 pounds). Since you’re invariably now thinking, “But how much is that really,” we’ll end the suspense: This short-action receiver alone, as you see it represented here in the photos, weighs more than an unloaded Glock 17. And it’s easy to see why. Starting at the receiver’s rear, the tang is more like a tank, measuring 6 millimetres (0.236 inches) thick on our calipers. That’s nice, since it means you’ll never worry about breaking or even bending the tang as you torque down the rear action screw. Underneath the tang area sits another nice touch; a heavily inletted trigger pocket (in order to clear as many triggers as possible) that serves to locate a very nicely machined trigger hanger that is affixed with a single screw. On other rifles, trigger hangers can be used to perfect the timing of the interaction between the trigger and sear, typically with the aim of making the action easier to work. Here, we suspect it’s also to make trigger installations and changes easier for the customer and move the trigger downward. But more on that later. 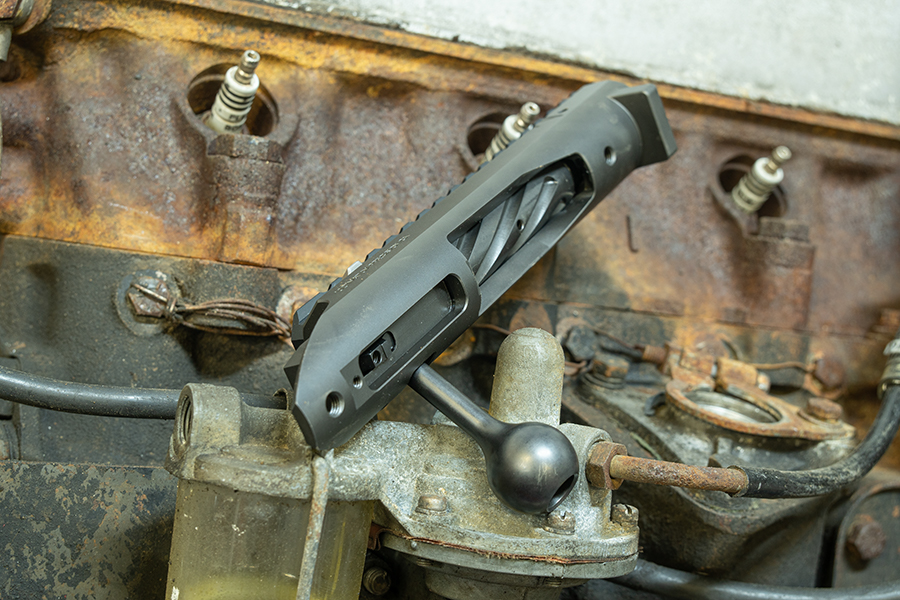 From there we arrive at the part of the receiver that houses the bolt normally. Here, again, the Ultimatum impresses with its pure girth. From side to side this receiver measured just over 32 millimetres (1.29 inches) wide. The bolt bore is cleanly drilled and from the nitride finish of the interior surface, it almost appears to have been polished or ground, as it’s glass-smooth. Also, note the lack of milled or broached raceways for bolt lugs; instead the Ultimatum uses a design we’ve seen on other rifles (various German-built designs and the popular Ruger American springing to mind) wherein the bolt stop guides the bolt fore and aft by riding in a groove machined into the bolt body. That reduces the machine operations in production, which inherently aids accuracy, and it keeps the cylindrical shape of the receiver intact; creating a stiffer action.

Outside, the nitride finish is wonderful and uniform. The Ultimatum logo is engraved behind the small-as-possible ejection port, which is actually even smaller than it looks, due to the ridiculously thick receiver walls. It measured out to around 17 millimetres (0.67 inches) tall; about 5 millimetres (0.2 inches) larger than a .308’s case head diameter. Again, the goal served here is to keep the action as intact as possible, aiding stiffness.

On the opposite side of the receiver, a Deadline motif is well engraved from the bolt stop forward, which itself is the solitary piece of brightwork on the action. A small silver tab, it’s operated by pushing forward, and inward. Forward of that sits the overpressure gas ports; designed to vent excess gases safely away from the shooter’s face. These also work in concert with an internal safety shroud that should keep any errant gases from travelling up past the bolt head, as well. On that subject, the bolt’s firing pin channel also vents into the magazine well and has additional shrouding of its own.

Finally, we arrive at the massive integral recoil lug and barrel threading. Ultimatum proudly states their integral recoil lug is a full 5/16” thick (7.9 millimetres), and although the thickness is impressive, it’s the “integral” part of that sentence that’s actually so sought after. There’s no way the action moves around atop this recoil lug and mechanically it’s superior to a recoil lug affixed around the barrel or pinned in place. Not that those don’t work, it’s simply that an oversized integral recoil lug such as this just has less parts, less to go wrong, and more accuracy as a result. 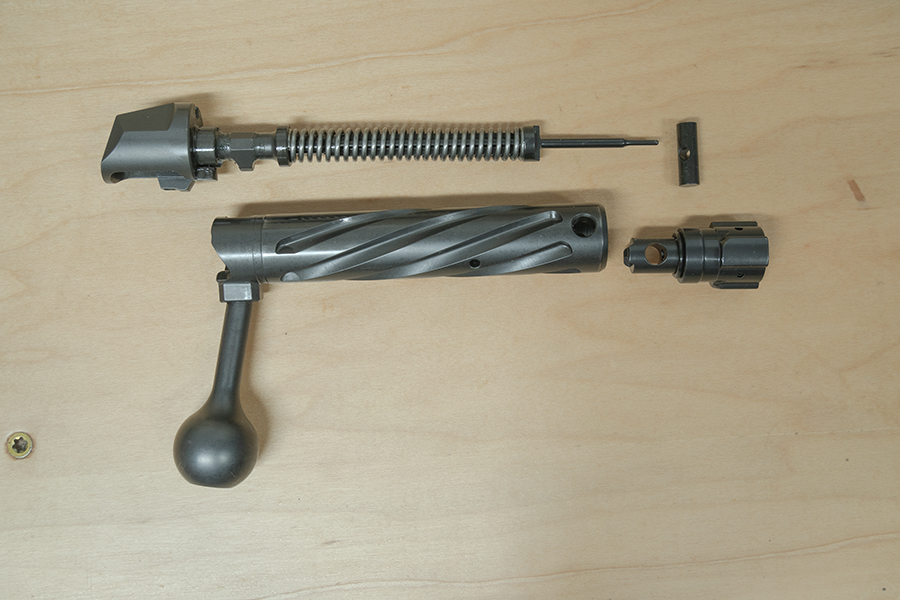 Which brings us to the barrel threading. After flirting with other threading options, Ultimatum’s turned to the most popular option: Savage’s small shank 1-16” x 20 TPI threading. That means all manner of Savage barrels will fit; from homegrown IBI tubes to Shilens to even factory Savage barrels. It also means these actions go together in a familiar and well documented way (although the Ultimatum documentation is excellent), in the Savage fashion. Of course, if one so desired a shouldered barrel could be tightened down and finish chambered, alternatively. Ultimatum’s documentation provides the necessary dimensions.

Atop the receiver, a 20 MOA rail is fitted… not integrally machined in. By using two dowel pins to locate the rail and six #8-40 machine screws to secure it to the receiver, Ultimatum claims it’s just as capable of handling the heaviest optics, and we don’t see any reason why it wouldn’t. Plus, since it’s not integral it can be swapped out, should a different cant than the factory-supplies 20 MOA be desired.

And finally, below, one of the Ultimatum Deadline’s improvements over the U300: A magazine well that accommodates AICS or AW magazines. AICS, or “Accuracy International Chassis System” magazines feature a longer internal dimension (handy for seating longer, or loading longer bullets), but are quite a bit more compact due to their double-stack nature. That double stack also makes them a lot less reliable with heavily tapered rounds, though, which is why some shooters prefer the centre-feed, single stack, longer Accuracy International Artic Warfare (or AW) magazines. In the case of the Deadline, you stock or chassis choice will dictate that; a real boon on a rifle designed to be easily built and rebuilt.

The Ultimatum Deadline’s bolt, packaged in its own foam slot, continues the plus-sized trend we’ve noted this far: The aforementioned full-diameter fluted bolt body is a whopping 23.5 millimetres (0.925 inches) in diameter. By comparison, a Bergara HMR bolt, lifted from what is essentially an improved Remington 700 action, has a bolt body that’s just 20.2 millimetres (0.795 inches) across. On the scale, a complete short-action Bergara bolt (with a slight slathering of Ballistol… we do pull these out of our storage safe for these comparisons, after all) weighs in at 334 grams (11.8 ounces). The Deadline bolt? 370 grams, or 13 ounces. It is, just like so much else about this action, very, very large… and very, very smartly designed, to boot. 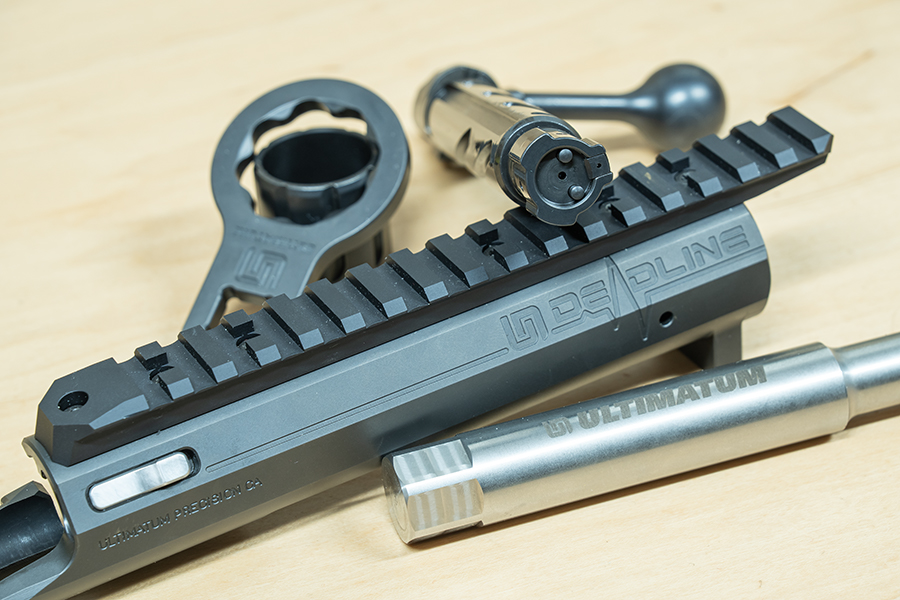 For example, because Ultimatum designed this gun to be easy to work on and easy to modify, field stripping the bolt can be accomplished in about three seconds, sans tools. Twist the rear of the bolt in the same direction the bolt rotates in the action (clockwise for right-handed actions, counter clockwise for left-handed actions), and it will release the striker assembly from the bolt body. With that done, the pin holding the bolt head to the bolt body can be pushed out, and the bolt head replaced. And here’s the first and only gripe we’ve got with this action: Our action arrived with a trio of bolt heads, meaning we can use this short-action with a wide variety of chamberings, but there’s no way to identify them. The bolt face diameter really should be laser engraved on each one somewhere. To a lesser degree we also would prefer to see a Sako-style extractor, but having shot plenty of rifles with the same Savage-style extractor used by the Ultimatum Deadline without issue, we can’t really fault the choice. And with the dual ejectors housed in the bolt-face, we suspect that getting rounds out of the action won’t be a problem, regardless of how slowly it’s worked. We love the 60-degree bolt lift offered by the three-lug format too; we don’t necessarily find it to be demonstrably faster than a convention two-lug action, but it does keep your hands clear of any optics, and that’s a nice touch.

Assembled, the overbuilt receiver and girthy bolt combine for a stripped weight of 1,015 grams (2.24 pounds). It feels great, too; the polished interior surface of the receiver and the massive bolt body combine to make for an incredibly slick action. Impressively, there is almost no appreciable increase in bolt play at any point, either. Tugging the tail of the bolt left, right, up and down produces the same amount of movement regardless of where the bolt is in its travel. And once closed, you can appreciate the slight rearward rake of the very long, very large bolt handle, too. Oh, and the bolt lift; the subject of much derision around the original Ultimatum U300 action? It’s fine. Online claims peg it right around seven pounds, which we’ll test once we have it assembled.

Which is what we’re going to be doing here. In the next issue, we’re going to follow the process of screwing a barrel to the Ultimatum action, and hopefully we’ll round that update out with a trigger installation too. Then, in the following issue, we’ll discuss the options and what it takes to stick one of these in a chassis or stock, because while the trigger hanger accepts most Remington 700 barrels, and the receiver accepts all small-shank Savage barrels, the receiver itself is something slightly different. Remember how we mentioned the trigger hanger was partly responsible for moving the trigger down in relation to the bore? Well, that’s because the massive bolt body protrudes lower than a conventional Remington 700 action, which had to be accounted for in the design. So while it has an almost-Remington 700 footprint, it’s different enough to warrant talking about. But that’s literally a story for another day. In the meantime, we’re happy to report that if our experience thus far is indicative of Ultimatum’s quality, they’re one more Canadian gunmaker that’s going to be around for a while.