Are you like us?  Do you spend a lot of time in the gun store?  Are you paid like a writer, and needed to finance your first car over seven years?  And it was a 1978 Impala…that you bought last year?

If so, you’re probably taking the same approach we do to firearms shopping: picking through the used gun rack for hidden gems.  There’s always something interesting there, leaned up amongst the towers of wood and blued steel; some storied surplus machine with ancient, grease-blackened stocks, or someone’s worn and well-loved hunting rifle, perhaps built in an era in which labour was cheaper and craftsmanship was the rule rather than the exception.  Thankfully, many guns are built to last lifetimes, and quality used rifles can be great purchases with years or decades of use left in them.  To become truly expert in assessing used guns takes years of hard-won experience, usually gained by making enough bad purchases to discover exactly what to avoid, but with a bit of study, most prospective buyers can arm themselves with enough information to avoid the worst slings and arrows of used gun buying, and come out with a serviceable rifle that will live up to their expectations.

To get the inside scoop on assessing used guns, we sat in with Shane Mathieson of Reliable Gun in Vancouver as he went through his own inventory, picking out some instructive examples and unique items to illustrate buying used, done well.

This is about as straightforward as it gets, and we’re putting it first because it requires no special  knowledge or gun handling skill, but it’s often the single largest factor in pricing.  We looked at three examples of Winchester saddle ring carbines with varying degrees of finish wear, from “some wear” to “heavy wear” to “not a trace of finish left on the metal or the wood”.  Does it affect to functionality of the gun?  Not directly, although it may be indicative of the general level of care taken by the previous owner.  In the case of the absolutely de-finished Winchester here, the screws had clearly been removed in a clumsy fashion, likely with the wrong sized screwdriver, and naturally that might lead one to question whether there would be stripped threads hiding inside. 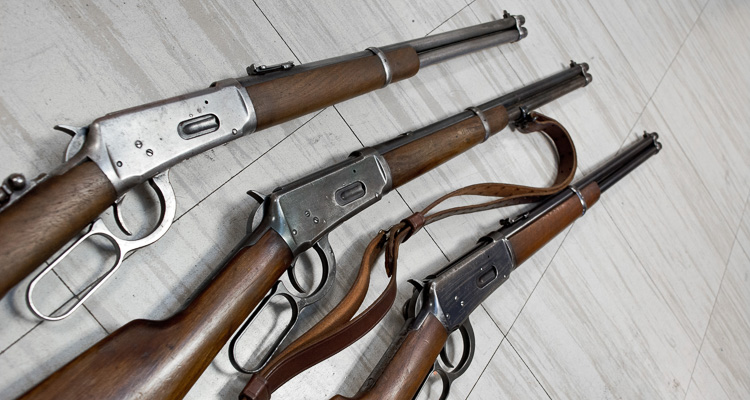 There’s also the issue of corrosion protection on any gun with a severely worn finish.  External corrosion also won’t necessarily impact the functioning of the gun, but if the intended use is going to put the rifle out in the elements, you may be in for an unpleasant surprise when you remove it from a case after bringing it home from the field. 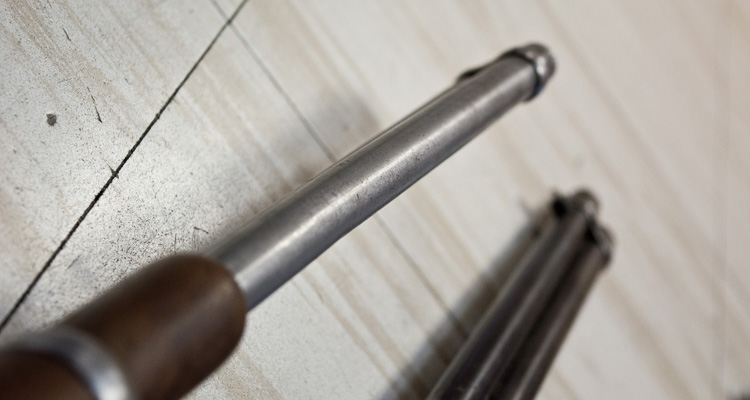 This same Winchester had a bent tube magazine that was visible if viewed from the right angle; the magazine fed properly and the damage was purely cosmetic, but again, the external condition of the rifle is going to affect its resale value and it’s worth noting if you’re the buyer. 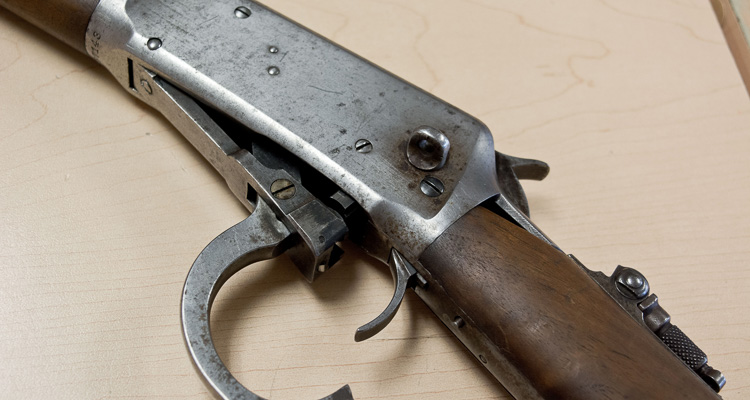 Assuming the rifle is a traditional wood-and-steel gun, the wood can also reflect the overall condition of the piece.  Dents and dings are unlikely to affect accuracy or reliability, but cracks may, and cracking is sometimes much harder to detect.  Here we have a stock which revealed a crack on the tang when held in the right light; otherwise it was nearly invisible.  The same stock was cracked internally, although that was even harder to detect.

One consideration regarding the finish condition of a rifle: in general, a better finish is a desirable thing, and even if that means the gun has been refinished, most people won’t see it as a negative.  If it masks past abuse, however, or affects the collector value of a rifle, it’s worth knowing that the finish isn’t original.  Spotting a refinished gun is relatively easy once you know what to look for, however: edges of polished surfaces will often take on a “wavy” shape as a result of felt wheel polishing, and barrel proof marks will go from being slightly raised, or proud, of the surrounding surface, to having a somewhat mushy appearance.  For most applications, this shouldn’t matter too much, but it’s worth taking a look just so you know what you’re getting into.

The next round of visual inspection involves the rifle barrel.  Externally, the barrel crown is easy to observe; you’re simply looking for any damage or wear at the point the bullet is going to exit the barrel.  Any damage here can have a serious impact on accuracy, as it can either deform the bullet, destabilizing it as it arcs through the air, or in extreme cases, allow a lop-sided jet of gas out as the bullet exits the barrel – essentially acting as a muzzle brake, but sending the gun in a random direction.  Not pretty. 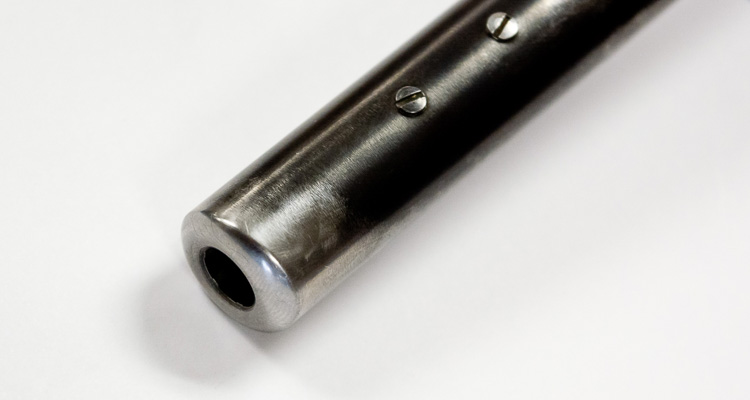 The most extreme example of crown damage Shane could dig up was this old Remington 760 which, he speculated, had spent much of its life riding around wedged muzzle down between the seat and console on the passenger side of an old Chevy truck.

Another factor in barrel condition is bulging, or “rings” in the barrel.  This can occur if a bullet or other debris has become lodged in the barrel, and the gun was fired without clearing the obstruction.  It’s a dangerous condition that can be identified by looking through the barrel for circular shadows, where the entire barrel has been expanded slightly.  In most cases, there will also be external bulging of the barrel tube, but depending on the location of the ring, it can be difficult to locate from the outside.

Inside the barrel, the condition of the metal can range from shiny and pristine, which is of course ideal, to a very slightly corroded, with a whitish surface condition known as “frosting”, to blackened and pitted, the most extreme examples of which are sometimes described as “sewer pipe”.  Frosting is generally nothing to worry about; it can be the result of lack of cleaning after the use of corrosive ammo but if there’s nothing worse than a bit of white oxidation on the inner surfaces of the barrel, that’ll likely disappear once the gun goes back into service anyway. 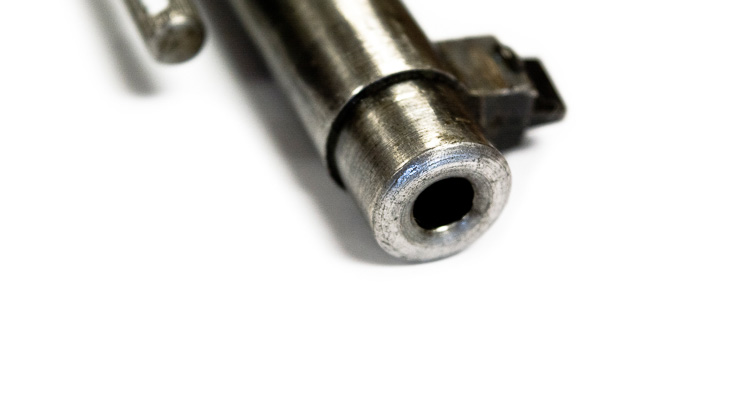 Pitting is a more advanced stage of corrosion, and shows up as dark “freckles” inside the bore.  Whether or not a buyer should be greatly concerned about pitting depends largely on the gun.  Surprisingly, a lot of rifles with moderately pitted barrels still shoot with excellent accuracy; it’s also true that if you’re looking at military surplus rifles and hoping to get barrels without a trace of pitting you might be looking for the rest of your life.  If it’s Lee Enfields that have struck your fancy, for example, some generations will have been used with early, corrosive .303 British, and they were almost never carefully maintained.  But unless the bore is truly dark and rough, it may not be worth worrying too much about.

As a general rule of thumb, it’s worth paying particular attention to the bore on any gun from any former communist country, as the odds of it being used primarily with corrosive ammunition is very high.  If it’s a semi-automatic, the corrosive gases will also have been pushed through the entire gas system, so if the option of a field-strip and inspection presents itself, don’t hesitate to look elsewhere in the gun for pitting and rust.

Assuming the exterior meets your requirements, the next stop is in the action itself.  Obviously you will want to ensure there are no signs of serious damage or lack of maintenance such as broken springs or parts, but beyond that, we suggest a close inspection of the bolt.  In most cases, headspace will not be an issue unless the round count is spectacularly high, or the gun has been used with severely overpressure rounds.

If the round count is extremely high, the action itself will likely feel sloppy.  The ideal approach is to compare multiple copies of similar guns, feeling for the different degrees of tightness as you work the action. 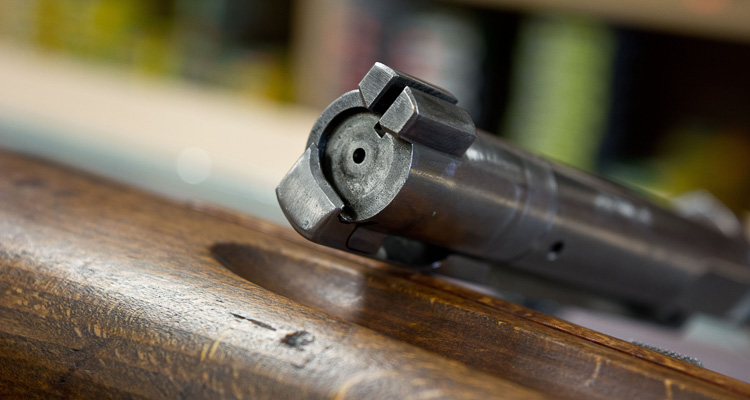 It’s also possible to find signs of wear on the bolt face; that frequently shows up in the form of worn extractors.  Each time a round is chambered and extracted, the extractor relies on a sharp “hook” to grip the brass and pull it out; this constant loading on a narrow steel edge means that over time, the edges of the extractor will round off.  That makes the extractor a good spot to inspect to get an idea of round count, and that’s why some people call the extractor a gun’s odometer.

In addition to extractor wear, the bolt face itself can reveal wear patterns.  A ring around the firing pin hole from primers being driven back into it is an indication of a higher round count or high pressure rounds.  Extremely high pressure rounds will not only accentuate this wear, but blow brass fragments into crevices around the action and bolt face.  Any use severe enough to alter the headspacing will likely leave traces of brass throughout the action, and it’s also quite possible that the breech face itself will be pitted.

When evaluating bolt-action rifles, it can be worthwhile to quickly check the bolt for a serial number; in most cases, the last few digits of the rifle serial number will be stamped on the bolt.  If the serial numbers match and there is no evidence of severe overpressure ammunition having been used, the gun should be a good bet.

This is difficult to guarantee without doing research into particular guns and particular markets, but remember that guns, particularly military rifles, go out of production on a regular basis.  Parts may not be available and even ammunition may be scarce, although those conditions can change.  Not long ago, 7.5mm Swiss ammunition was so rare in Canada that surplus K-31 rifles, which are fantastic machines often capable of stunning accuracy, were selling at fire sale prices.  Many gun buyers scoffed at those buying a rifle for which no ammunition could be had, but now that the ammunition situation has changed, those who bought K-31s for a pittance look very savvy indeed.

There are even more obscure issues to consider in regards to military surplus, however: consider the 8mm Mauser.  Early renditions had a bore of .318”, later ones were bumped up to .323”.  This presents a potential issue for owners of early Mausers: not only are they faced with tracking down .318” bullets, they also have to be certain that no one has unintentionally fired .323” bullets through the narrower barrel.  Now that’s a recipe for severe overpressure! 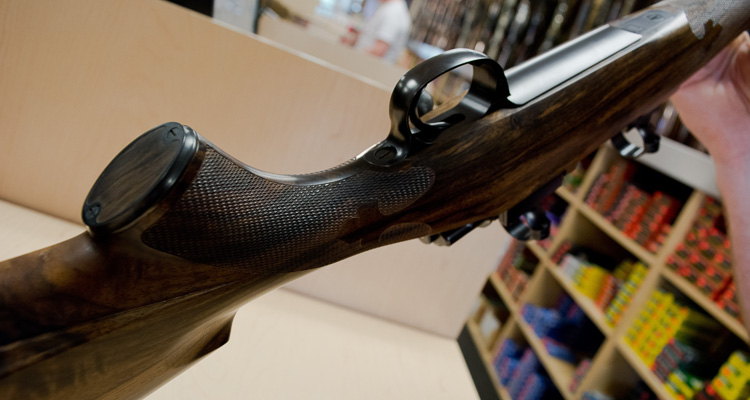 Finally, have a look at the accessories that have been added to the rifle, if any.  These could be anything from muzzle brakes to optics to aftermarket stocks.  The value of each item is simply a matter of what the local market will bear, so don’t get sucked into paying retail value for parts you don’t need or want.  Some sellers will try to get back very large percentages of the value of their extras, and we’ve even seen people trying to charge for the hours of labour they invested in mounting scopes.  Whether you want to pay for someone else’s project is up to you, but with the exception of quality glass and extra magazines, most accessories lose a very significant percentage of their value on the used gun market.

So there you have it: Calibre Magazine’s quick-and-dirty guide to scooping up bargains on the used gun rack, as related to us by one of our local experts, who’s bought and sold more guns than most people will ever see in their entire lives.  Now get out there and put his experience to work!