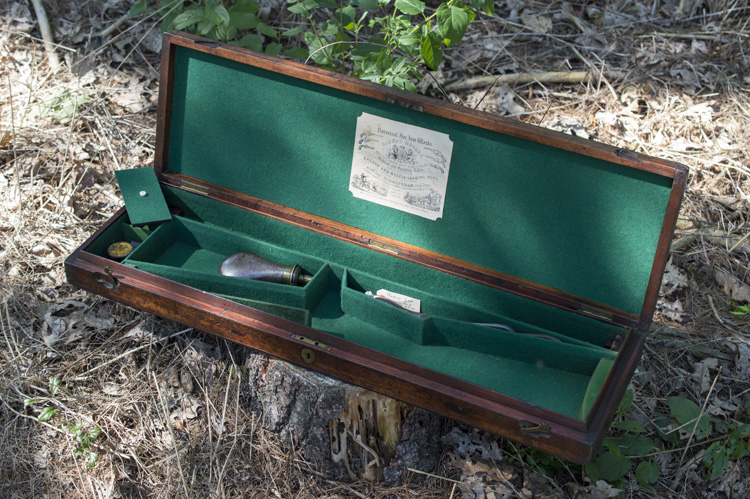 In late 2015, the Canadian Historical Arms Museum was the very pleased recipient of a rather unusual firearm known as a “Cape Gun.” In general terms, a Cape Gun is a combination gun, specifically a side-by-side with one barrel rifled and the other smooth bored.

The Cape Gun derived its name from its particular use in the southernmost part of Africa, i.e., South Africa. These arms were retailed in the Eastern Cape of South Africa where there was apparently much conflict between the British settlers and the local tribesmen which lasted up to the early 1880’s. 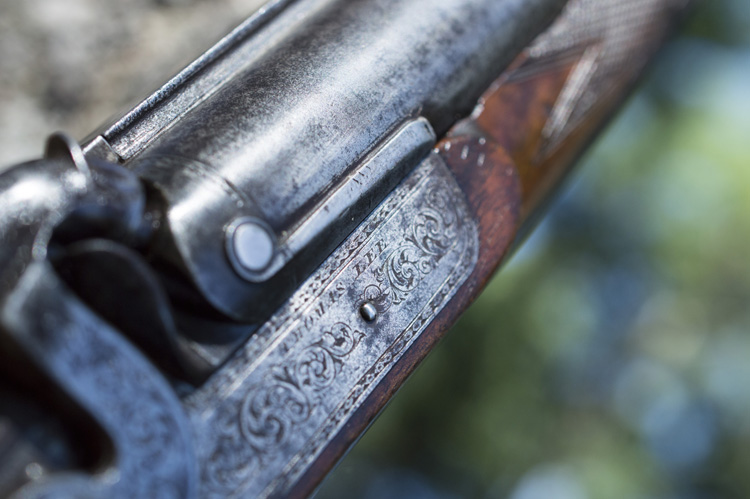 Most Cape Guns were built for African game hunting. They offered the flexibility of having both a shotgun and a rifle in the same firearm. This allowed intrepid hunters to take whatever game presented itself with a single gun, rather than having to carry two. Yes, they were heavy, but they did offer a convenience that had a definite appeal to the African hunter. And, given the calibre of many Cape Guns, a little excess weight was probably welcome to dampen some of the recoil. Given these firearms were used to take everything from birds to Cape Buffalo, they had to have some substantial poke, undoubtedly at both ends.

It’s also worth noting that a Cape Gun is simply one format of what’s known as a combination gun; a break-action firearm that combines a shotgun and a rifle in one. Cape guns are typically defined as combination guns where two barrels are positioned in a side-by-side format. In an over-under format, they’re simply refered to as combination guns, while the addition of a second rifled barrel (for a total of three barrels) is known as a Drilling. If the gun has two shotgun barrels and two rifled barrels, for a total of four barrels, it is best known as overkill… or (properly) as a Vierling. Coincidentally, drilling is German for “triplet,” while vierling is German for “quadruplet.” 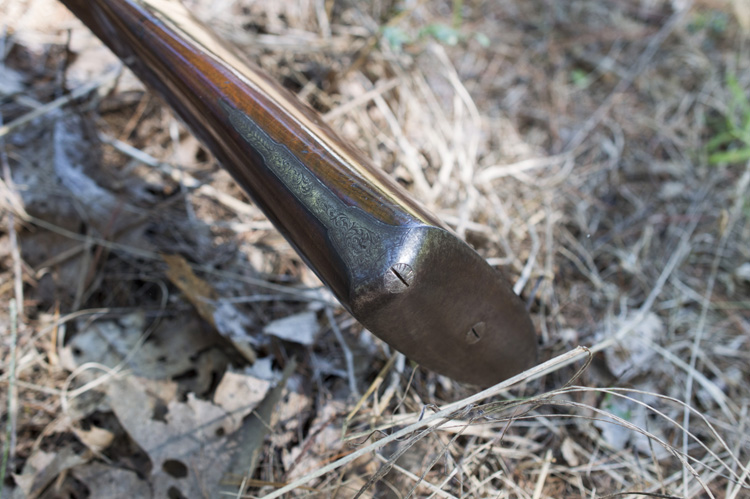 The firearm in this discussion is a Cape Gun made by Thomas Lee, who was a Birmingham gun and rifle maker. He had a shop in London and was in business for a relatively short period, opening in 1834 and closing down again just 11 years later, in 1845. Both lock plates are marked with his full name and the word “LONDON” is marked on the top rib.

This is a relatively massive firearm in percussion ignition with side locks, double triggers and double hammers. Its damascus barrels are 29-5/8″ (752mm) long. Like many guns of the era, the gun is quite embellished, with engraving all over the sideplates and with hammers styled to look akin to fish; a common nod to the lavish sportsmen that typically purchased these firearms. When originally delivered, it must have been gorgeous, especially when the damascus barrels were new. Even today, over a 150 years later, there is no mistaking the quality of this firearm. 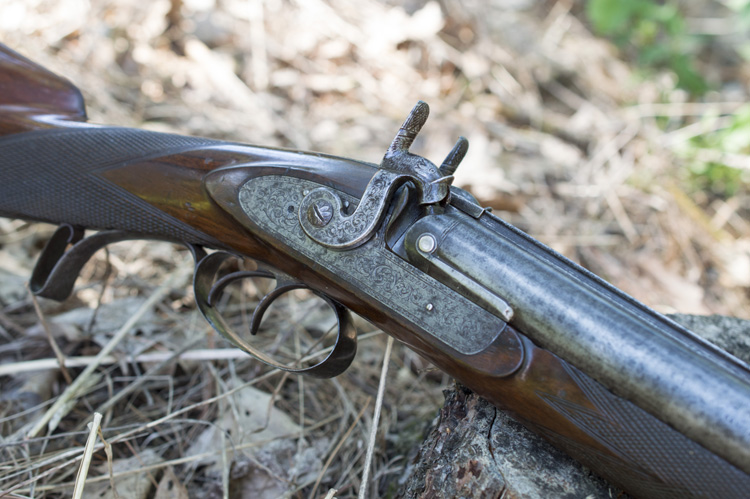 The stock is walnut, and in exceedingly good shape, given (again) the age of the firearm. The checkering is still reasonably crisp and in good shape both on the forestock and the grip area, and there are very few marks on either. Given this, and the completeness of the entire setup (including the ramrod, case, and all the accessories), this firearm has evidently been taken care of extremely well. 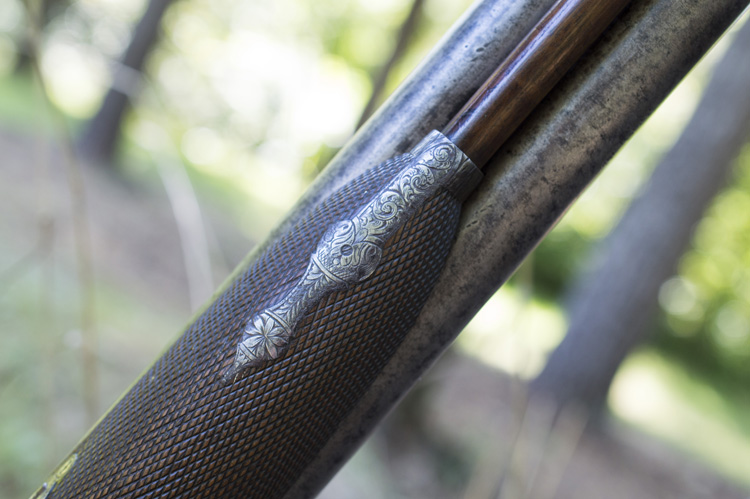 Taking the gun down is a process typical of the era. First, a small, flat, tapered pin is removed from the forestock by simply pushing it through from one side, which releases the forestock from the barrels and allows the barrels to be tipped forward and removed from the receiver. The process is not entirely disimiliar from disassembling any modern break-action firearm. However, being a percussion ignition, muzzleloading firearm, it looks dramatically different as there are no cocking appendages, latches, nor firing pin holes in the breech face. The breech is simply a flat-faced hunk of steel.

But all this is typical of the average Cape Gun. Where this particular gun diverts from the norm is in the sighting system. A very unusual feature of this particular gun is its top rib, which is one inch wide, runs the full length of the barrels and has graduations across it marked from one to twenty. This rib forms a sort of rail for the included sliding-type sight attachment that the user can affix to the rib (it simply snaps in place), and move fore and aft to accommodate the desired range for the rifled barrel. 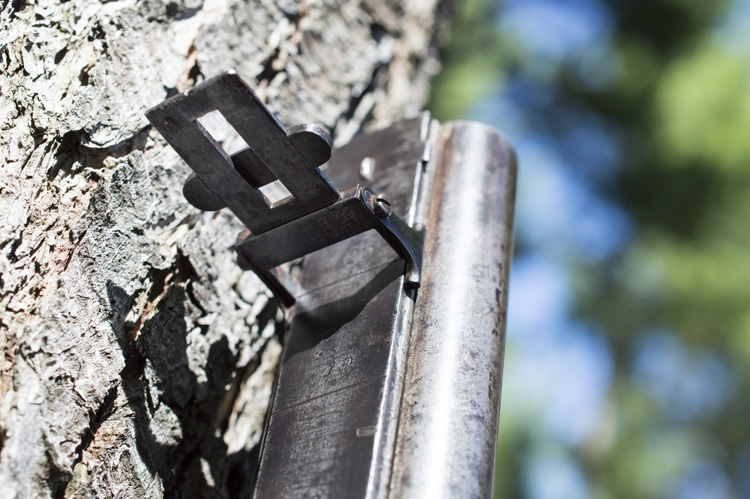 This apparatus can certainly be compared to a type of “volley sight” arrangement. The gun also has a more conventional three leaf express sight for more… normal shooting activities. After all, one does not usually hunt with volley fire.
The right side shotgun barrel is .710″ bore, while the rifled left barrel, which is proofed at “23,” has a bore diameter of .592.” The rifling consists of three broad grooves with a depth of .006.” This gun weighs in at just under 14 pounds total. Again, certainly not a light firearm. 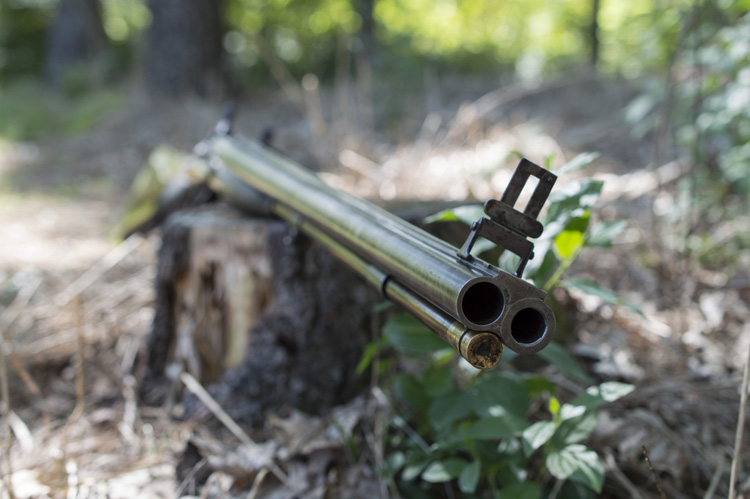 Information on this particular type of Cape Gun is sketchy to say the least. While much is known about conventional Cape Guns, the sighting apparatus on this gun makes it incredibly uncommon. From research, it has been reasonably determined that the concept of using groups of riflemen to deliver volleys of concentrated rifle fire for long range effect, much like that of artillery, must have been considered as viable based on the existence of such Cape Guns as exemplified by this example.

It is assumed that the rib markings are graduated for ranges up to 2,000 yards, quite a feat even by today’s standards. However, very little accuracy would be expected at those ranges. Not only did the contemporary understanding of ballistics leave something to be desired, but in the accompanying photos on page 23, you can see the angle required to align the rear and front sights when the sight is moved to the 2,000 yard mark. In this position, one would expect the gun’s stock to be placed on the ground, and essentially used as a mortar to send volleys in a (at best) general direction. 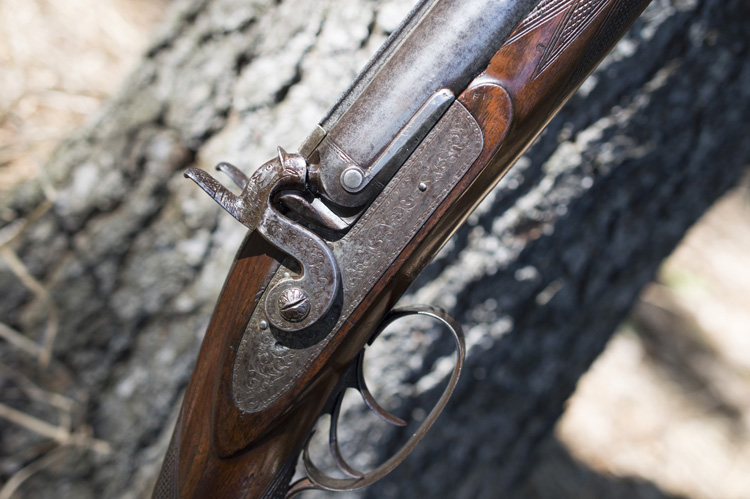 I did find an interesting piece of information in W.W. Greener’s book, “The Gun and its Development,” where he is explaining the origins of “Express” sights. He mentions the fact that his father, W. Greener, was engaged along with a few other makers, in building a rifle suitable for South African sport. The “Cape Rifle” as he explains it, was a true double rifle in that both barrels were rifled. These guns had two groove rifling with one turn in 30 inches; the grooves being broad and deep, in order to admit the bullet easily. The rifles were sighted up to 2000 yards. Greener makes no comment as to what exactly was being shot at, at such distances via volley fire, but given the historical frame of reference one can probably draw their own conclusion. 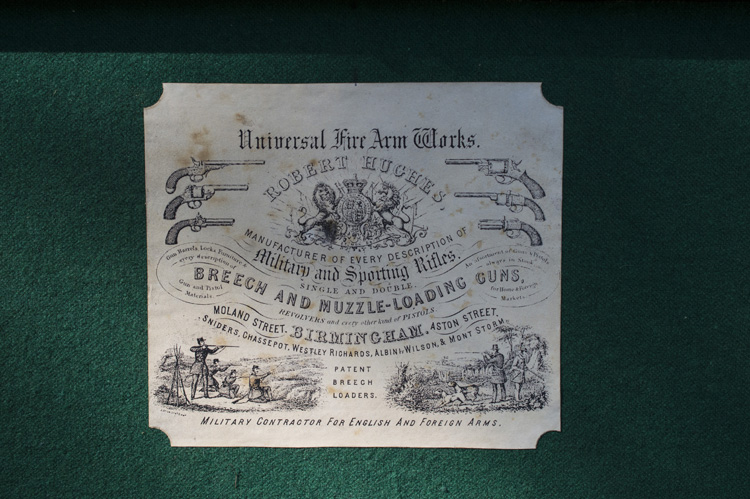 The Thomas Lee gun came to us with a custom made oak carrying case with its carrying handle and latches all intact. The label on the inside of the top cover is marked “Universal Fire Arm Works” and “Robert Hughes.” Research has revealed that Robert Hughes was a Gun and Rifle Maker in Birmingham dated 1855 to 1890 with the factory known as the “Universal Fire Arm Works” from 1868.
This firearm would appear to be a very rare item in North American terms and is the first such example of this type of Cape Gun that the Museum has ever encountered. Additional information on the maker or the firearm would be most welcome by CHAM.