Spring is officially in the air. To the average Canadian, this means the beginning of an all-too brief span of months in which time spent outdoors can be enjoyed without packing 20 pounds of clothing and emergency supplies. Gone are the dark and snow-sodden mornings spent dragging heavy hockey bags to the arena. People are out and about, enjoying long, warm afternoons at the ball park or early morning tee-offs on a sunny, green course.

Yet for some, the chirping of spring’s songbirds has a different significance. Because, when the sun is shining and the birds are a-twitter, it’s prime time to break some clays. When we at Calibre began hearing this delightful sound, we thought it was time to bring together two of the most successful lines of clay killers you’re liable to find on the sporting clays course: the Benelli SuperSport and Beretta A400 Xcel. Both represent the latest in long lineages of Italian sporting autoloaders, come from the same boot-shaped country and even fall from separate branches of the same massive Beretta Holding Company tree, but these two guns are remarkably different. But then again, any layman could tell you that, just by looking at them! So which is right for you?

The Beretta A400 Xcel 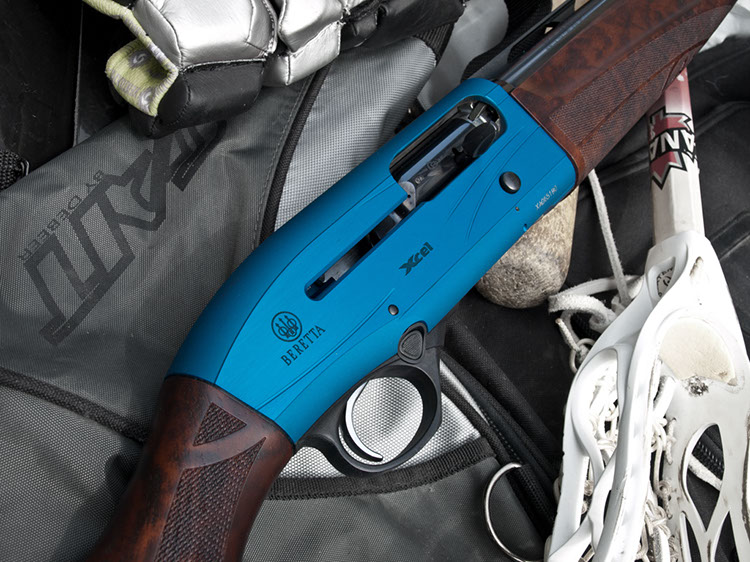 Representing the most current version of Beretta’s incredibly popular gas-operated autoloader lineup, the A400 is a bit of a Beretta hodgepodge. Although destined to fulfill the role previously occupied by the A391/AL391, and comprised of a model lineup that’s quite similar to that outgoing model’s, the A400 is actually closer in relation to the successful Xtrema line of Beretta autoloaders that has distinguished itself as a superlative field gun. Externally, it bears much of the same styling in its machined aluminium receiver as the AL391, and still wears some of the finest wood ever fitted to an autoloader (even if it is a product of Beretta’s “Xtra wood grain enhancement), but borrows heavily from the Xtrema series internally, relying on an action spring coiled around the magazine tube to drive the action and utilizing a rotating bolt-head to lock-up. Driving it all, however, is a gas system that’s unmistakably similar to that of the AL391.

But while the small gas piston and super-stout exhaust valve spring might make for a gas system that at least looks like that found in the A391, there can be no mistake: the A400’s is thoroughly revamped. While the AL391 utilized a more traditional ribbed gas piston to accomplish a modicum of self-cleaning during operation, the A400 uses a much smaller, more heavily sculpted piston that incorporates a heavily toothed floating steel washer to do the same. This prevents the occasionally broken ribs found on AL391 pistons, and also feels like it allows for a slightly lighter gas piston; at least it felt that way in my hand. Also, as the toothed washer is sprung to be slightly oversized for the gas cylinder bore, it more forcibly scrapes the carbon of the cylinder walls, and kept the cylinder surprising clean after a day’s shooting. But most impressive, Beretta calls this combination of gas system and action the Blink system, and touts it as the fastest autoloading system on the planet. Capable of dispatching four rounds before the first hull hits the ground, Beretta says this new system is a full 36% faster than any other autoloader on the market today. 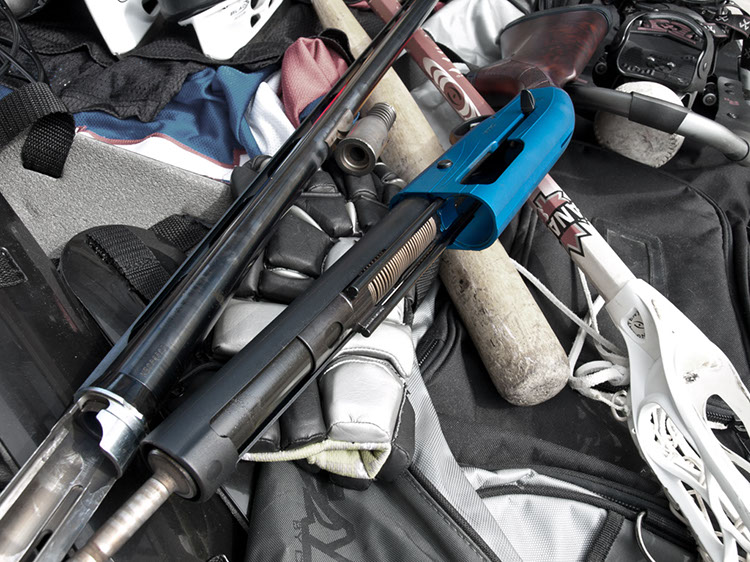 And it feels it; especially in the turn-key hot rod Xcel model we had on hand. Sure, it might look like something knocked together in Papa Smurf’s shop, but it does an excellent job of delivering a gun that’s as competition ready as any potential owner could want. Fitted with a gas piston specifically engineered to cycle even the lightest of loads, as well as an Xcel-specific weighted end cap to help bring some authority into its balance and swing, each and every Xcel leaves the factory with but one purpose in min

d: to break clays. And it does. Add in the superb Kick-Off recoil absorption system and vastly less useful (but still entertaining) GunPod odometer, and you’re faced with a gun that’s as comfortable as it is devastating.

Which is partly why we found it to be one of the friendliest and most approachable sporting clays shotguns we’d ever handled. What does that mean exactly? Well, in terms of the simple mechanics of shooting a shotgun, the combination of the A400’s new extremely long forcing cones (also known as Beretta’s new Steelium technology), quiet 32″ barrel, uber-soft Kick-Off feature, and well designed gas system made it the single least abusive gun most of our testers had ever shouldered. Really, even loaded up with target-grinding sporting clays loads like the STS Nitro from Remington and Federal’s Gold Medal Sporting Clays, the punch it delivered to the shooter was about as hard as a love tap from an octogenarian grandmother. And since it’s gas operated, infirm shooting stances and shoulders had no effect on its operation, and it happily cycling everything down to the sub-7/8th of an ounce international trap loads we fed it. 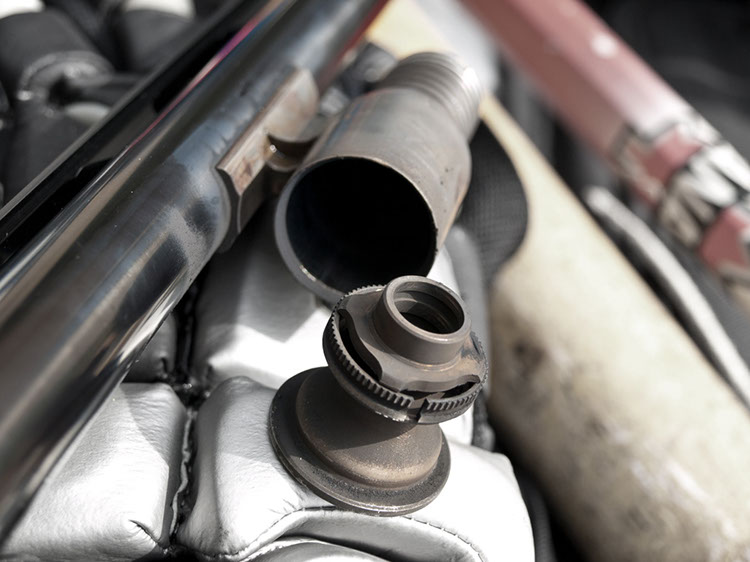 But if the Xcel’s recoil- and report-taming properties were one of its most noticeable attributes, then it’d have to be one of its least noticeable characteristics that really intrigued us: the gun’s balance. Given the entirety of the gun’s action resides in and ahead of the receiver (meaning there are no springs or such in the stock as with most semi-automatic shotguns), and our tester’s long barrel and Xcel-specific weighted end cap, it should come as no surprise that our tester maintained a balance point that was somewhat farther forward than most guns’. This in turn gave it a heavier, smoother swing that corrected nicely for the over-exuberance of the less experienced, and forced one to approach each target presentation quite deliberately. It rewarded those that took a methodical, patient approach to each target, and was intolerant of those that tried to rush to a target or break the gun’s momentum to get onto the second target, making it great for those for whom such things are not quite second nature yet. 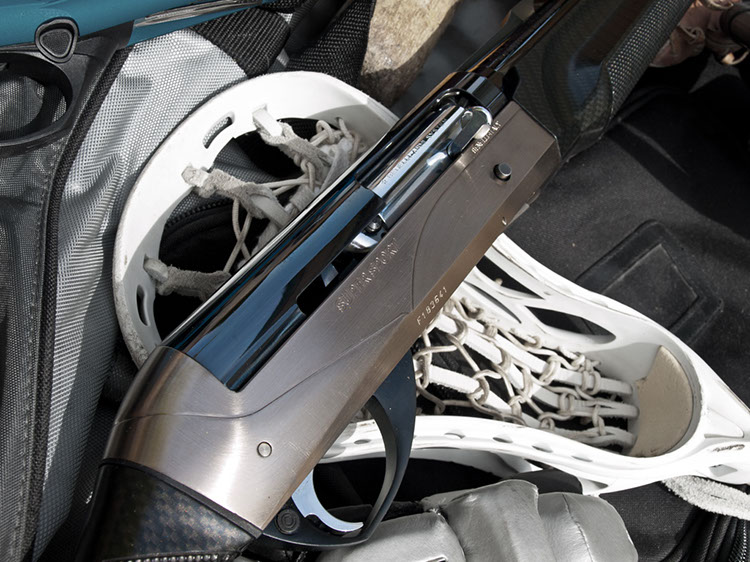 If the Beretta A400 Xcel represents the modern ethos of high-tech manufacturing with its anodized blue aluminium receiver, LCD GunPod readout, and highly-tuned gas system, then the Benelli SuperSport must be considered one of the last holdouts championing the cause of simple designs being manufactured by what are best referred to as true artisans. Containing just a handful of moving parts and relying on nothing more than the recoiling action of the shotgun to operate, it’s probably the simplest form of operation in the autoloading market, but don’t confuse the term “simple” with “cheap.” The SuperSport pairs a beautifully machined and brushed-finished stainless steel lower receiver and one the most lustrously blued barrel assemblies you’re liable to lay eyes on, and although the faux carbon fibre finished stock might break with tradition somewhat, there’s simply no getting around the almost indescribable level of quality that’s demonstrated in the SuperSport’s metalwork. But in that regard, we’ll let the photos speak for themselves. 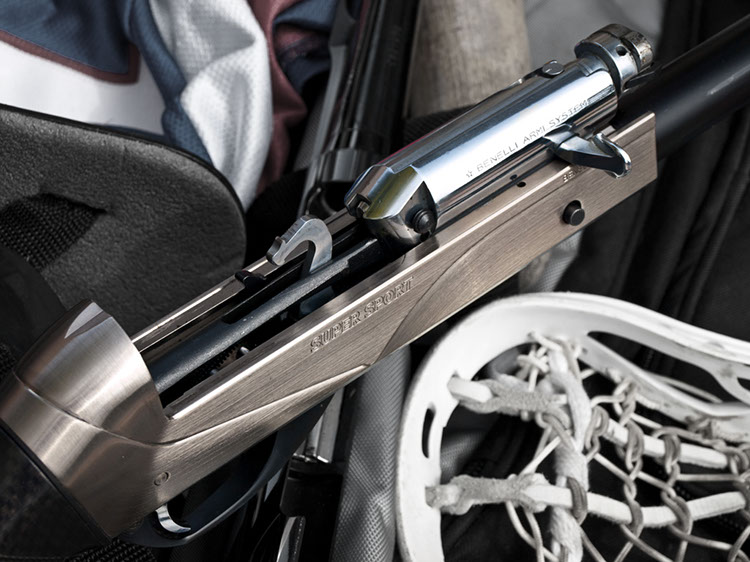 Inside, the SuperSport operated on what Benelli calls their Inertia Driven System. Differing hugely from the long- and short-recoil actions typified most notably by the Browning A5 and Double Auto, respectively, the most crucial difference worth noting is that unlike either of those actions, the Benelli Inertia Driven System does not rely on the barrel and bolt moving rearward together to facilitate the locking and unlocking of the bolt. This in turn reduces the amount of mass moving rearward after firing, which in turn helps reduce the amount of perceived recoil, while also minimizing the amount of moving parts. Furthermore, by keeping the majority of the action’s parts contained within the upper receiver, Benelli has managed to do away with the various action bars, recoil springs, and dampers that you find hiding under most semi-automatic shotguns’ forends, and replaced them with a simple recoil spring in the stock, a floating bolt body, an inertia spring, and a rotating bolt head. The key to understanding how it all works is to keep in mind that inertia is defined as the tendency of an object in motion to remain in motion, or an object at rest to remain at rest, unless acted upon by a force. So, after firing, as the gun itself is driven rearward by the recoil impulse, the floating bolt body, being a mass at rest that is not locked to the rest of the recoiling shotgun, naturally wants to stay in the same place. This creates a situation in which the shotgun essentially travels rearward around the immobile bolt body. However, as the rotating bolt head remains locked to the chamber, the recoil of the gun causes the bolt head to move rearward towards the immobile (remember, inertia being the tendency of an object at rest to remain at rest) bolt body, compressing the inertia spring that separates the two. As the recoil impulse fades, the energy contained within the now-compressed spring pushes the bolt body rearward, which in turn pulls the bolt head with it, causing it to rotate on a cam and unlock. From there, the whole bolt assembly travels rearward until it compresses the recoil spring located in the shotgun’s stock, which in turn pushes the bolt forward again, into battery. 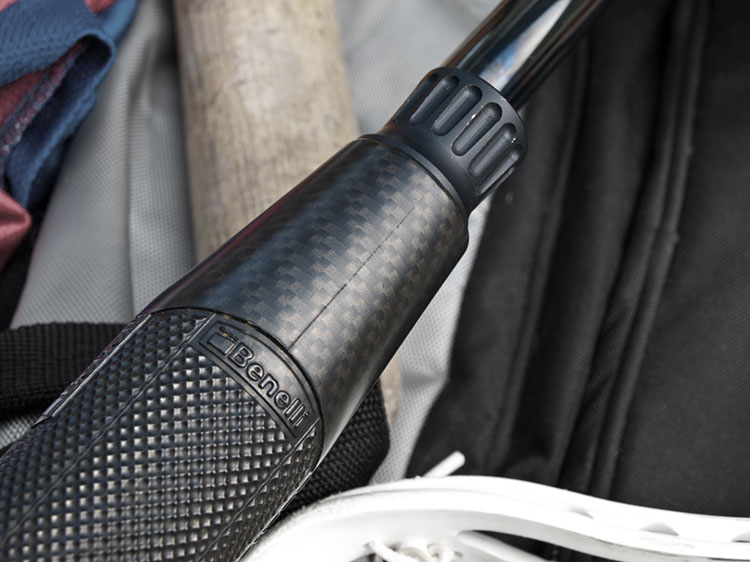 While the obvious benefit of this system is an incredibly simple action that has to be numbered amongst the most reliable and readily maintained autoloading shotguns on the market, the unburdening of the forend of all the various components that typically reside there also helps move the gun’s balance point well back, making this one quick and nimble sporting gun. As a result, it was a bit less forgiving of erroneous hiccups in a swing, and could definitely be made to feel whippy if you were overindulgent with your swing speeds. But, the flip side of that equation was that it did extremely well on fast-moving quartering targets where being too patient meant allowing the target to put too much distance between the muzzle and itself, while also allowing the more experienced shooters among us to tackle targets with a bit more speed and veracity. And it was a real pleasure to operate, too. Thanks to its dependence on inertia for operation rather than a combination of gas and spring pressure, the SuperSport’s action was slick as well-lubricated snot, and every internal mechanism was the very picture of precision; things that were supposed to move did so with the absolute minimum amount of effort required, and the things that weren’t felt as solid as a rock. Also, it’s worth noting that although it definitely didn’t quell as much recoil as the Beretta, it cycled everything that Beretta did and then some; the SuperSport was the only gun on hand that managed to cycle the ultra-soft Remington Managed Recoil target loads.

Although you certainly can’t go wrong with either of these excellent sporting guns, they strike very different chords out on the clays course. The Beretta, with its flamboyant Smurf-inspired styling and becalmed handing, feels like the perfect gun for someone who’s not quite prepared to take on the more substantial investment required to get into the over/under market, but still wants to up their game. Conversely, the Benelli, with its slightly higher price tag, superlative quality of construction and quick handling characteristics, feels like an autoloader intended for those more experienced shooters who don’t ever see themselves stepping into double gun territory. In either case though, one thing’s for sure; on a beautiful spring morning on any sporting clays course in Canada, you could do much worse than to swing either of these Italian jobs up to your shoulder!