I’ve always been a big fan of the Remington 870 series pump action shotgun; the Wingmaster and Police models to be particular. They are reliable, have an endless amount of aftermarket accessories and just look plain cool with a set of ghost ring sights and Surefire forend. Unfortunately, neither of these serve an advantage in the world of 3-Gun, where follow-up shots, quick sight acquisition, reload speed and weight are critical components of winning a match in the competitive TacOps division. Enter the Remington Versa Max.

When the Versa Max was first introduced few years back, I had read the initial reviews and by and large, they were quite positive. Semi-autos in the old days were finicky and unreliable. At the time, the only high quality, reliable semi-automatic shotguns that were capable of being competitive in the three gun world were made by Benelli and cost a substantial sum; the Benelli Performance Shop M2 3-Gun Edition carries an MSRP of almost $3,000. Of course, this isn’t to say they aren’t worth of that price tag, since they’re made in Italy and display a very high degree of craftsmanship, but they’re still expensive. 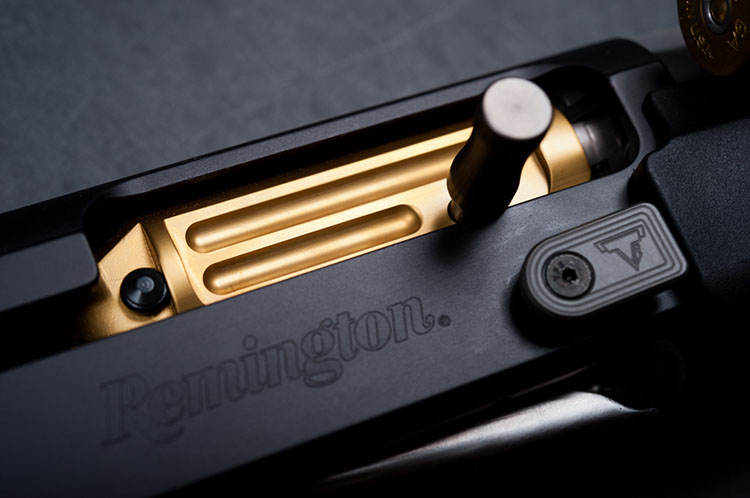 One of the primary reasons for the Benelli’s dominance in the world of competitive action shooting sports is the company’s two semi-automatic systems; the Benelli Inertia Driven System (seen on shotguns like the M3 and Super Black Eagle family) and their equally well-respected Auto-Regulating Gas Operation system, better known as ARGO and employed in the venerable M4. The latter system utilizes a pair of expansion chambers and small pistons mounted on either side of the bottom of the barrel, and is automatically regulated by a release valve on the end of each expansion chamber that vents excess pressure. The benefit to this system is that it allows the entire gas system to occupy far less space within the forend. That keeps weight off the front of the gun, and also allows for the gas system to operate off gas pulled from as close to the chamber as possible, making for more reliable cycling (by virtue of working off higher pressure gas over a longer period of time than conventional gas-operated guns) and a cleaner gas system as the higher gas temperatures deposit less carbon in the system. And siice it regulates itself by virtue of the release valves, the action can still operate with light loads, but will not end up beating itself up with heavier loads. It’s not surprise that the US military decided to make the ARGO-equipped Benelli M4 their shotgun of choice.

Just as it’s no surprise then that when the patent protection surrounding the ARGO system expired, someone would step up to the plate to build on the impressive foundation Benelli laid, and that manufacturer was Remington. Using a similar dual-piston system, Remington’s new gun still pulled gas from directly in front of the chamber, but did without the regulating release valves employed by Benelli. Instead, the Remington engineers devised a system of holes in the chamber itself in order to regulate the amount of gas going into the system. This system works by using the hull of the shell itself to cover off progressively more gas ports as longer shells are loaded. When a 2-3/4” shell is loaded, seven ports are exposed for maximum gas flow, while a 3” shell loaded into the chamber leaves just four ports available, and the big 3-1/2” shells leave just three ports exposed. Thus, the heavier the load and the higher the pressure, the less gas volume is permitted into the gas system. 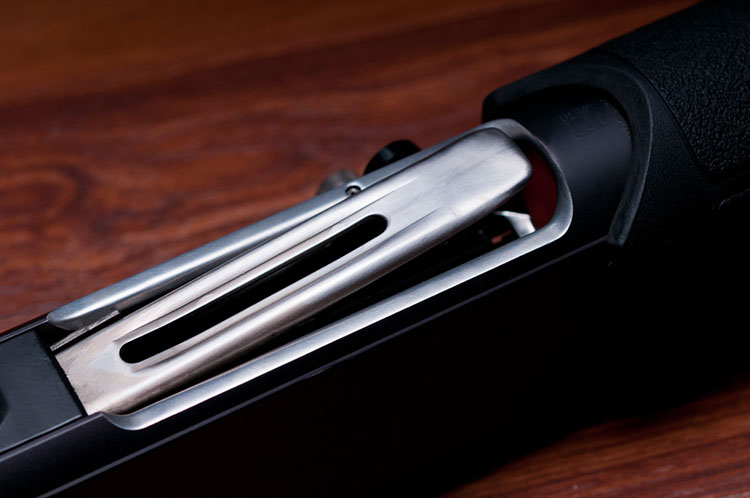 The Versa Max is said to be very reliable, but at the same time breaks the price barrier so it’s affordable for an average Joe like myself. Soon after its release, companies started to recognize their similarity to the popular Benelli M4, and began modifying them specifically for 3-Gun competition. One of these companies is Tactical Ordnance, located in Newmar­ket, Ontario – a private federally licensed firearms business specializing in firearms repair, modification, and training.

Casey Brouwer, the owner of Tactical Ordnance is one of the best gunsmiths in province of Ontario if not in Canada. He has 30 years of policing background in a major department and 23 years of service with an emergency tactical team. He started Tactical Ordnance in 2002 and his customer base spans from east coast in Newfoundland to the west coast in BC. Well known for their highly popular custom shotgun extension tubes, Tactical Ordnance is also the only other facil­ity licensed to do the Vang Comp barrel modification invented by Hans J. Vang in Arizona. I’ve gotten to know Casey over the years and he always takes his time to explain to me in detail the advantages of each modification. When I was ready to purchase my Versa Max, he had already informed me that I can purchase the shot­gun direct from him and when it’s ready to be picked up, it will have had all of the necessary modifications done to it.

I had originally requested for a Versa Max Sportsman with 26” barrel but had to set­tle for 28” due to lack of stock. And the list of parts and modifications requested was lengthy. The first and foremost task was to open up the feed port and blend the larger opening. The one downside of the Versa Max is a relatively small loading port, so by removing some metal around the port to create a larger hole and a better bevel, it is much easier to load shells. Next up, Casey removed the dimples in magazine tube (which allows for maga­zine tube extensions to be fitted), and polished the chamber. 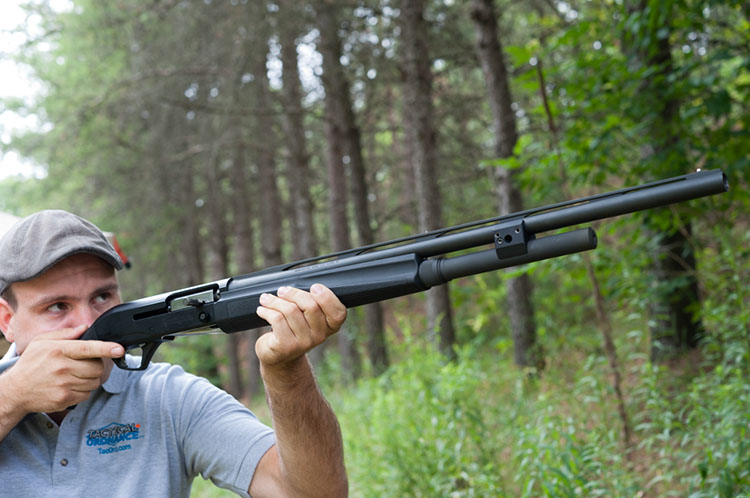 Then he went to work on the action of the Versa Max; mill­ing material from the round bolt body to turn it into a slab sided bolt with addition­al lightening cuts. He then refinished the bolt with a beautiful coat of titanium ni­tride (TiN) for better wear resistance and lubricity… plus, it looks awesome. Then the bolt release was drilled and tapped in order to have a Taran Tactical Innovations oversized bolt release fitted. To capital­ize on the now-enlarged loading port, the carrier was welded to both eliminate the thumb-eating forked end, as well as to lengthen it slightly to compensate for the longer loading port.

With those done, most of the remain­ing modifications were simpler. Taran Tactical Innovations’ charging handle and spring kit were installed, as was a Rem­ington Jumbo Safety and a HiViz Fibre Optic front sight kit. Of course, being so well known for their magazine tube extensions, a Tactical Ordnance extension was also fitted allowing the Versa Max to carry five 3.5” magnum shells, or seven 2-3/4” shells. Finally, a MatchSaverZ was bolted onto the forend, which allows for one additional shell to be carried outside the action for the moments when one more shell is needed to complete a stage. Positioned almost directly in front of the ejection port, the MatchSaverZ is used by sliding the left hand back (for right handed shooters) and simply pushing the shell out of the MatchSaverZ and into the ejection port, then hitting the bolt release. 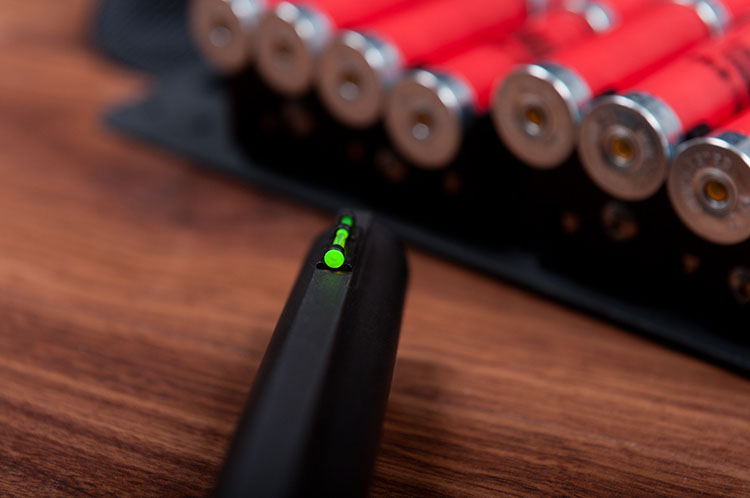 As a result of all these modifications, the Versa Max runs faster than ever. Opening up the feed port it allows easier double & quad loading by feeding two or four shells in at a time. The lighter bolt and polished chamber means a faster cycling time. The larger charging handle and bolt release make it easier to rack the bolt and find the button without looking. The spring kit reduces trigger pull weight which in turn keeps the gun steadier. The welded carrier eliminates the chance of getting your thumb stuck between the lifter and the receiver while reloading. The Jumbo Safety is big enough that disengaging the safety and putting my finger on the trigger is accomplished with a single motion. And of course, fibre optic sights always help target acquisition versus the factory beads which are difficult to find and see. And when all else fails the MatchSaverZ is a neat little thing that allows me to have one round quickly available when the gun is empty.

No shotgun setup is complete without shotshell caddies. I’ve decided to go with the DeTurk Vest 8×24 made by Invictus Practical after doing some research on various products. The vest goes on my chest like a chest rig and can be quickly detached if the stage does not include shotgun. Meanwhile my Vtac Brokos Belt (aka Battle Belt) with G-Code D3 Carriers (for rifle and pistol mags) is worn throughout the course of the match. 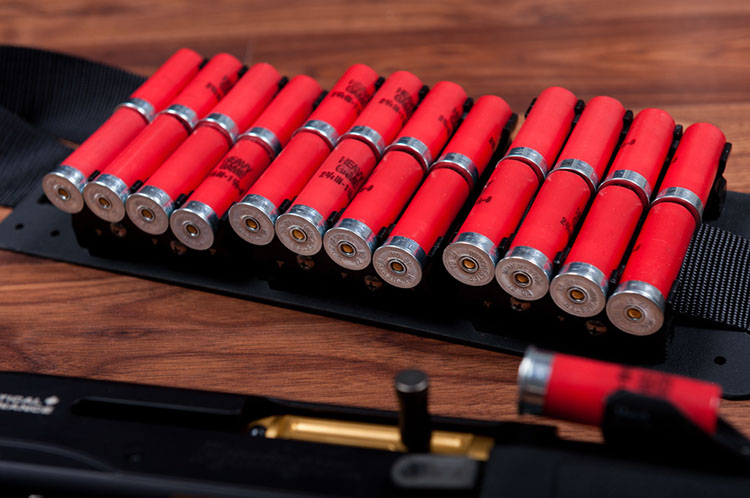 How does it shoot with this setup? With the advantage of a semi-auto and ease of loading with the vest, I’m able to accomplish fast double-loads almost immediately and without much practice. The shell holders on the vest are canted slightly towards my reloading hand and they’re separated by three tiers of eight shells so I can grab pre-arranged shells for either birdshot or slugs depending on the course.

Recoil on the Versa Max is quite soft from the factory, and feels slightly lessened now, although that’s always a tough thing to be certain of. The lighter trigger is definitely appreciated though, the oversized controls and buttons just make everything easier to find when the adrenaline is pumping, and the end result is a gun that feels every bit the the top-shelf competitor that it should be. 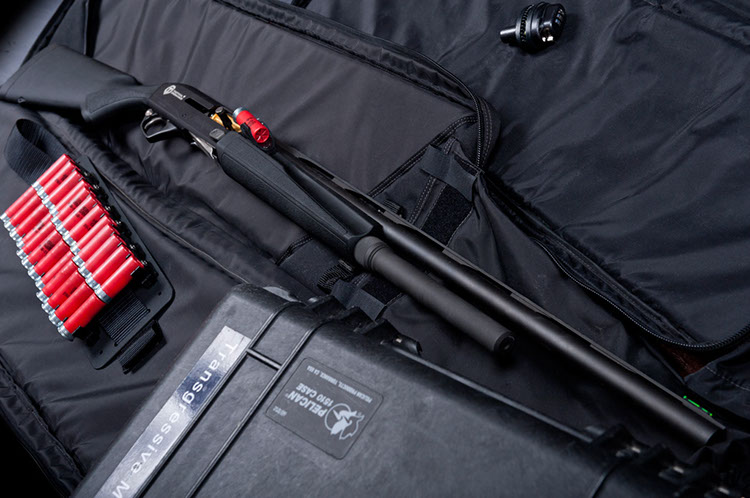