The RCMP has reclassified the Cz858 and Swiss Arms, two of Canada’s most popular black rifles. In doing so it has created a legal mess for itself, the Federal government, and upwards of 13,000 Canadian gun-owners.

That may sound drastic, but it is exactly what happened in the last days of February when the FRTs for Swiss Arms Classic Green and Cz858 were pulled and re-listed as prohibited firearms.

The acronym FRT refers to the Firearms Reference Table, a database from the Canadian Firearms Centre that is accessible to registry employees, firearms verifiers, and business license holders. An FRT lists a unique model rather than individual guns. So while there may be many registration certificates for the many Glock 17s, they all refer back to one singular FRT entry. 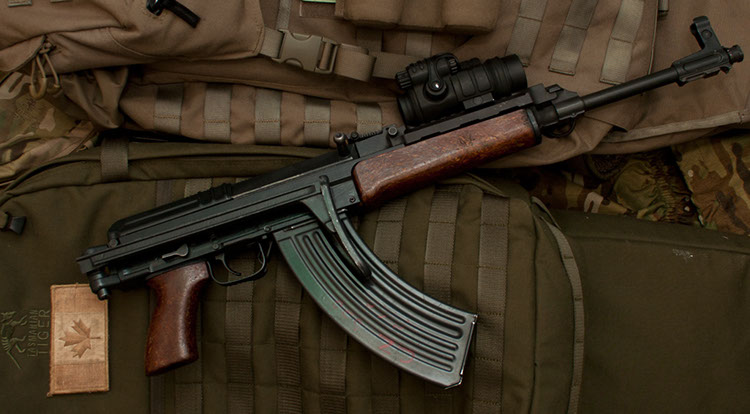 It is the FRT entries for these rifles that have changed. Their registration certificates seem to still be valid, at least where they are registered guns. Many of them are (were?) non-restricted firearms, which means there is no longer any registration to revoke, and no list of owners to serve notice to. These rifles now have the sordid distinction of being unregistered prohibited firearms in the possession of owners without a proper license.

There has been no official strategy on how the RCMP might deal with these unregistered guns. As of writing, it’s been two weeks since the reclassification with no public statement or documentation.

But under the Firearms Act, possession of an unregistered prohibited firearm without possessing a prohibited license carried a mandatory minimum sentence of 3 years imprisonment. Those mandatory minimum sentences were overturned for being unconstitutional in November last year, and now the minimum is a year in jail with a maximum of 10 years. The same punishments would apply to selling prohibited firearms without alerting the Canadian Firearms Centre.

If you’re not familiar with the classification system: guns in Canada will fall into one of the 3 categories roughly outlined below.

Non-restricted applies to most long-rifles and shotguns, both semi-auto and manual actions.
Restricted generally covers handguns, all AR-15 rifles, and semi-auto firearms with barrels under 18.5”
Prohibited class covers all kinds of firearms. Some are explicitly named in the Canadian list of “bad guns” which includes G3s, Kalashnikovs, FALs etc, while others are full-auto firearms, or were once fully automatic firearms (converted auto.) Others still are prohibited as guns under a certain size or caliber laid out in the Firearms Act.

Why did the FRT change from non-restricted to prohibited? The Classic Green, manufactured by Swiss Arms, has enjoyed 12 years of use by Canadian shooters. It is a premium .223 rifle, reliable and accurate like a Swiss watch. They can easily cost $4000, and as many as 2000 are estimated to be here in Canada. 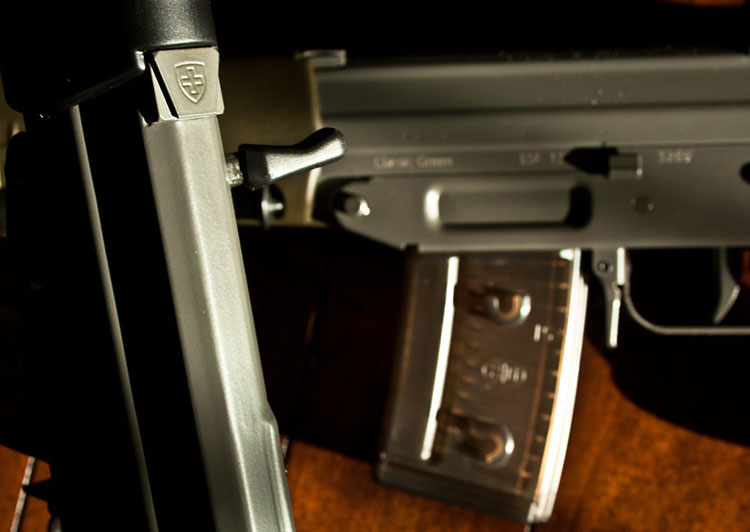 But last June an RCMP investigation brought doubt over whether the rifles were a redesign of the SG-540, or actually a variant of the SG-550. The SG-550 is explicitly named as a prohibited rifle in Canada, which means all “variants” of that rifle are also prohibited.

The spark that initiated the RCMP investigation has been the subject of much debate, misinformation, and bad-blood. Two rival gun-stores: the Calgary Shooting Center, and The Shooting Edge, have each imported Classic Green rifles at different times.

A complaint filed with the RCMP’s National Weapons Enforcement Support Team (NWEST) led to an investigation of CSC’s newly imported rifles, which had been built to “Canadian Spec” by SAN in Switzerland.

One of these CSC rifles landed on the counter of TSE, who found various attributes in it that differed from any of their own Classic Greens.

TSE felt legally obligated to send both the traded-in gun and examples from their own stock for evaluation to ascertain their legality.

The rifles were submitted to William Etter the Senior Firearms Technologist of the RCMP. In June of 2013 he asked both CSC and TSE to submit supporting documentation that might clarify the lineage of the Classic Greens. His findings were:

On February 26th, Swiss Arms rifles were pulled out of their Non-restricted and restricted classes, and re-listed as prohibited firearms.

Two days later almost all Cz858s imported after 2007 were reclassified as well.

The Cz858 is a Canadian specific version of the Czech-made Sa58 rifle. With a retail price of $600 these rifles are the Canadian Kalashnikov: a commonly available, affordable to own, affordable to shoot red-rifle that is both accurate and fun. There are a wide variety of rifles including the CSA Vz58s (currently unaffected) FSN series rifles (currently unaffected) and the three specific versions of the CZ858 Tactical-4 V, Tactical-2 V and Tactical-2 P. True Kalashnikovs are on the prohibited list, but the Vz58 is not explicitly named in any legislation.

Instead the RCMP has prohibited them as converted-automatics. The claim is that the receivers of these firearms were once select-fire assault rifles, and having once been, could be returned to their automatic form.

Some 858s have had their FRTs changed to converted-autos, while others are still listed as non-restricted & restricted, but with an unsettling note that encompasses the vast majority of Cz858s.

Any CZ858 Tactical firearm “with a large machined window on the left side of the sight block and a proof date of 2007 or later is derived from the full automatic CZ VZ58 firearm which has been altered to discharge one projectile with one pressure of the trigger. The original markings have been altered or obliterated and the firearm has been remarked.”

The “large window” described in that note seems to be a nearly universal feature of recent 858 imports. While the rifles may be semi-auto now, the phrase “derived from the fully automatic” is expansive enough that any of these allegedly remarked firearms could be interpreted as converted automatic receivers. 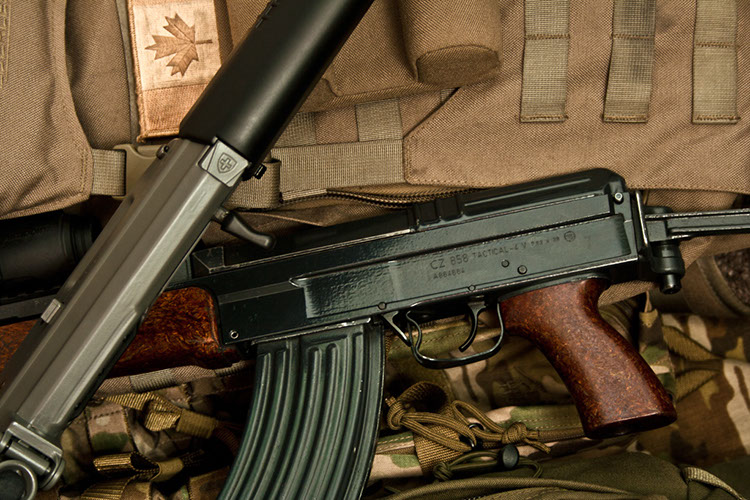 The Tactical-2 V is one of the now prohibited FRTs, and has an additional note: “CZ858 Tactical-2 V proofed 2007 or later can be converted to a full automatic firearm in a relatively short period of time with relative ease.”

This is worth noting because “relative ease” is the same terminology used to prohibit the Norinco T97A rifles back in 2008. In that scenario: all the firearms were registered, owners were served with notices that their certificates were no longer valid, and paid as much as $1400 compensation by the government to buy them back. The evidence for reclassifying those firearms based on the ease of conversion was presented to a judge, but never made public.

The same situation occurred with the BD38 carbine in the summer of 2012, which cost the government as much as $260,000 to buy back guns after the RCMP changed their classification. In that case there were less than 100 firearms in the country, and all the owners had their firearms registered.

This most recent reclassification the most wide ranging since the 1990s when the Firearms Act was first established through Bills C-17 and C-68.

The response has been overwhelming. The current Conservative government appears to have been blindsided by the RCMP’s actions, and Canadian gun owners are livid. Both the National Firearms Association (NFA) and the Canadian Shooting Sports Association (CSSA) are lobbying to have the decision overturned and prevent the RCMP from being the sole arbiter of future decisions. Public Safety Minister Steven Blaney, has mentioned a 5 year amnesty during question period, and promised that no charges would be laid against law abiding gun owners. But details of the amnesty, or even clarification on whether it is currently in effect, have yet to be revealed.

It is entirely possible that these rifles could become safe-queens by decree. In the 90s and early 2000s “amnesty” meant that owners would not be prosecuted for possessing their prohibited guns, but did not allow them to be shot or sold like the other classes. More often than not it meant the guns had to be turned in for destruction, or in some cases that the owners would be grandfathered in to a prohibited license. Off-the-record rumours suggest that the amnesty might allow these rifles to be used and sold like non-restricted firearms while the Government and the RCMP get things straightened out, but rumours do not have the force an official announcement does.

The worst case scenario is that these firearms are confiscated by force with no remuneration to owners, and the door left open for further reclassifications. An alternate scenario could see enough political backlash with the momentum to repeal old firearms legislation and reinstate previously prohibited firearms.

Right now uncertainty is rife within the Canadian community, with owners unsure of their own legal status or the future of their firearms. It seems that after a long dormancy, the Canadian shooting sports are facing a new upheaval. Whether that upheaval can be a positive force is yet to be seen.