With SHOT Show 2016 now in the books, our feet firmly entrenched in buckets of ice, and our voices hoarse from a combination of daytime talking, nighttime yelling, and whatever terrible virus does the annual rounds at Sands Expo and Convention Center, we’ve had some time to consider what this year has in store for Canadian gun owners. Between the hundreds of thousands of products on display, the various trends at play, and the extraneous factors unique to our market, one thing is for sure: This is going to be an interesting year for us Canucks. Here are the three biggest factors you can expect to make waves for 2016:

The Canadian dollar will be, without a doubt, the single largest influence on the consumer gun market this year. Over and over again, we heard the same jokes; “US MSRP is going to be $799, so roughly $4 billion Canadian?” The simple fact is this: With a dollar that’s buying just under 70 cents US, Canadian distributors and retailers are going to be hit hard on most of their orders, especially those coming out of the US. For Canadians who still want to purchase, they might better off looking for the best US credit card for Canadian citizenship so that they can use the US card to pay and benefit from the bank’s exchange rate. They might get a better deal that way. Even many orders stemming from European manufacturers will be done in US dollars at the global level, but some flexibility may be offered as manufacturers from places like Europe, South America and other markets look to capitalize on the strong US dollar as an opportunity to win over Canadian gun buyers by offering even marginal breaks on their pricing.

On the upside, it’ll be a good year for Canadian manufacturers, who will be able to take advantage of our terrible dollar’s insular effects on the market to provide Canadian gun buyers with relatively affordable products. As the Canadian dollar continues its downward trend, US-sourced products will increase commensurately in price, while Canadian products will be less effected and so may be more competitively priced. That could mean huge growth domestically for Canadian brands like Colt Canada, Elcan, Alberta Tactical, Tangent Theta, NEA, PGW, Cadex and the various other Canadian manufacturers. Globally, the effects could be even larger, as procurement contracts for literally thousands of individual items may look to Canadian suppliers to save millions of dollars. 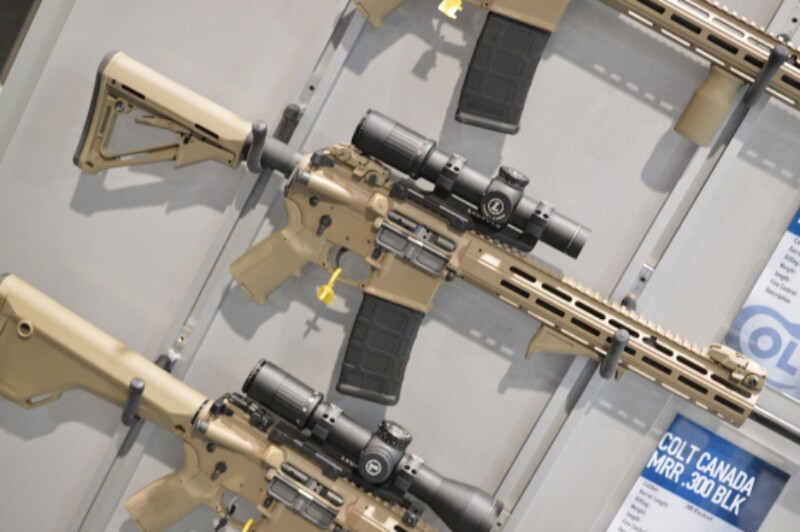 Colt Canada may be a big winner this year, with a lineup of great guns, and our weak dollar making them very competitively priced.

OUR TAKE: If there’s a gun you want, buy it now. Some retailers are still sitting on inventory purchased at 75 cents or better, and are hesistant to increase prices until they absolutely must. So if there’s a gun you want, especially an expensive one, you’re better off buying it now than you are putting it off. Because once those retailers have re-ordered their inventory and paid 68 cents or worse to re-acquire the same stock, they WILL be increasing prices. And as you always should, check for Canadian-sourced alternatives to the big US brands, because now it won’t just keep jobs and money up here… but it could save you a bundle too.

Partly due to the aforementioned dollar, and partly due to the general growth in the gun industry, there are a lot of brands gaining a massive foothold in the US market and we expect the same to happen here. Aguila, for example, was little more than a relatively obscure shotshell manufacturer not too many years ago… this year their presenence on the SHOT Show floor was probably as large or larger than any other ammunition manufacturer. Likewise, from what we saw, Colt Canada’s corner of the Colt booth was by far the most popular and well-visited area of the Colt space, routinely flooded with bodies while the rest of Colt’s square footage went unoccupied. 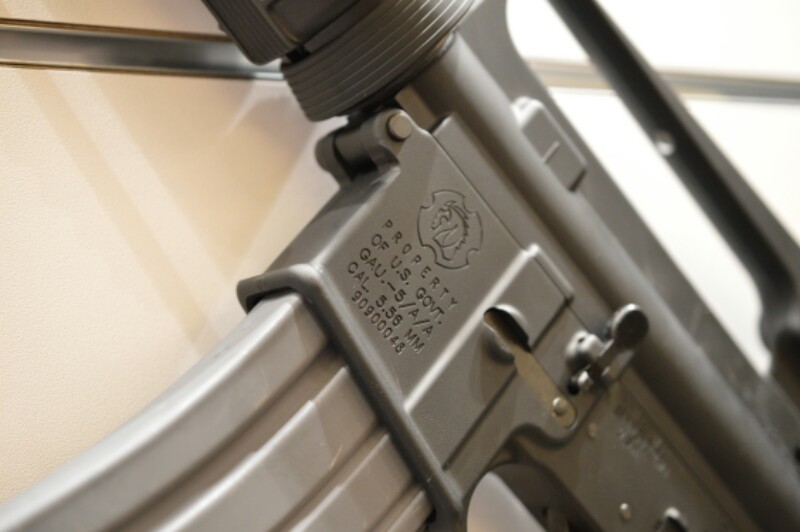 Troy’s limited release GAU-5 is a perfect example of a fun rifle, as smaller manufacturers look to capitalize on consumer fun and nostalgia.

And it makes sense. The US market is well established, and the largest brands extant in the US market have grown into massive, lumbering companies after years and years of extreme growth. They’ve gotten fat off the US-based gun buying surge that started right around the same time Obama won his first election (coincidentally), and that’s left it to smaller companies both inside and outside the US to stay hungry enough to look for those competitive, innovative advantages. In some cases, that advantage may come from installing high-tech, high-quality assembly lines in low cost centers to provide high-quality parts at lower prices, while in others it may come from revisiting manufacturing techniques or gun features in order to build a better mousetrap, so to speak. 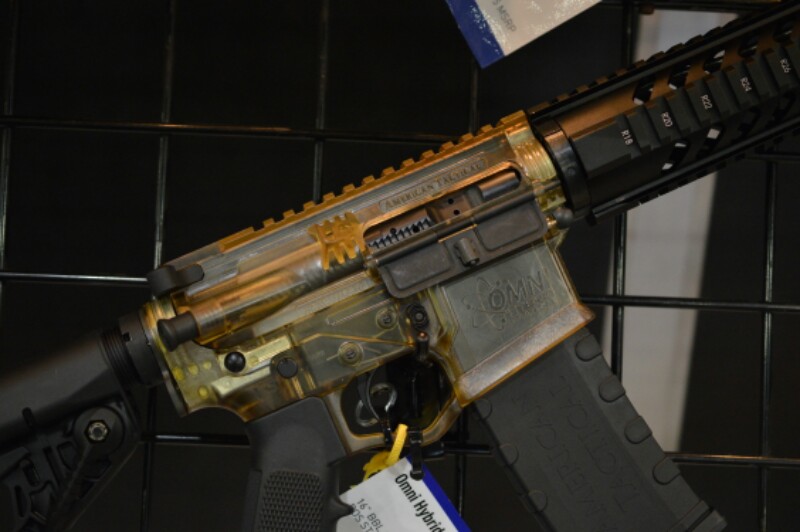 ATI’s Omni clear hybrid receiver is another example of a manufacturer using their smaller size to create a unique product a larger company might not be able to, or capable of justifying.

In no market is this more prevalent than the AR-15 market. Here, the biggest brands typically offer various versions of the exact same (perfecly serviceable) rifle, ranging moreso in quality and market perception than in actual function or manufacturing methodology. That’s left a gaping hole for smaller more boutique companies like Colt Canada, Schmeisser, Troy, Battle Arms Development, and a myriad of others to make names for themselves through innovation.

OUR TAKE: This effect, helped along by our dollar, could play out very well for Canadian business. Take Elcan for example. Already a globally recognized name brand, Elcan’s single largest hurdle has been their stalwart design ethos that grew out of their heavy reliance on Canadian Forces requirements (I’m looking at you, ARMS mount). But much like Colt Canada (who is going through the exact same thing themselves), Elcan has obviously recognized that their larger competitors are getting myopic in their old age, and have started to look for areas where they can make the most out of their competitor’s lack of vision (no meta-pun intended). And they demonstrated that by showing off a new holographic sight that could very well be the EoTech replacement that hundreds of thousands of people are probably looking for right now. Combine that with our terrible dollar, and all of the sudden us Canadian gun owners might end up faced with some of the coolest new products at some excellent prices!

The Rise Of The Civilian

Some explanation: In years past, commercial markets were dominated by overly serious buyers looking to get as close as they could to the stuff used by SEALS, JTF, and other special operations groups. However, those groups had just endured a period through the 90s where funding was marginal and their roles were far smaller than they are today, so much of that gear being sought by commercial buyers for the “looks cool factor” was somewhat aged. Heavy quad-railed handguards and massive flashlights ruled the day in the military, and so Joe Public carted around a 10 pound gun because it was what his favourite GI Joe used. 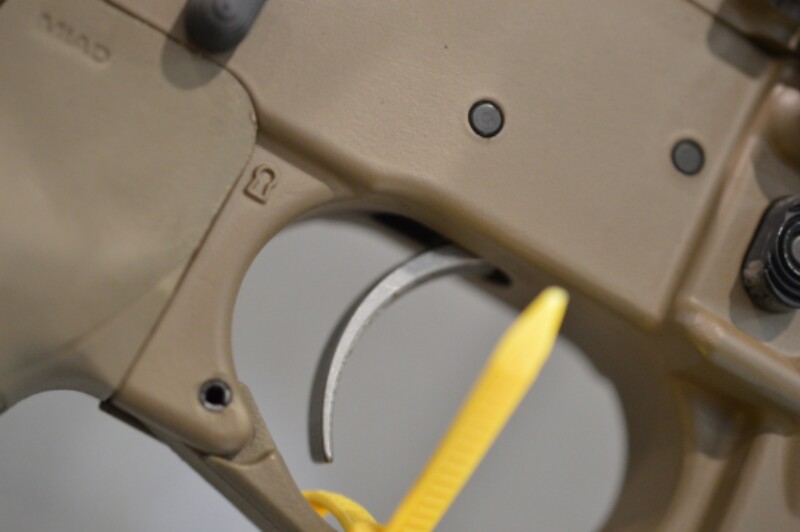 Canadian firm TriggerTech grew out of the civilian crossbow market, and is now being evaluated for military and law enforcement use by Colt Canada.

But since those days, we’ve seen a sort of coming together of the market in the last few years, as manufacturers have worked to meet military demands for lighter, easier to use firearms, and then lavished those developments on the civilian market. Simultaneously, we’ve seen the rise of 3 Gun and other competitive shooting sports, and the overall explosion of the shooting hobby among the civilian population at the exact same time as military procurement budgets and schedules have decreased. The result? We seem to have come full circle and manufacturers are now taking the input of commercial customers to heart, and creating firearms specifically for fun, rather than creating firearms for professionals and then passing those guns on to civilians. Nestled alongside M249s and SCARs were bright blue anodized competition rifles and shotguns at serious-gun-manufacturer FN, while similarly serious S&W broke news of their new rimfire pistol rather than chasing the military and police markets with another version of their M&P line. 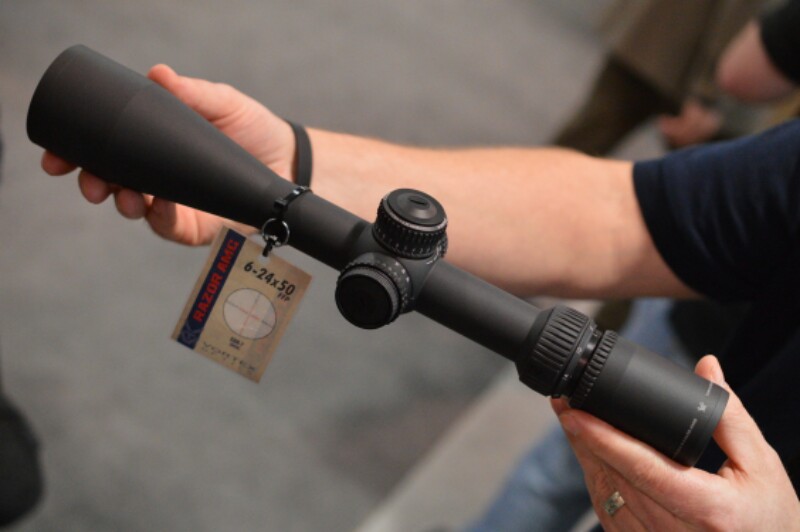 OUR TAKE: While the dollar and new brands entering the market will make waves for 2016, and probably the next couple of years, this is the trend that could change the face of gun ownership in Canada over the next decade. Historically speaking, it’s not uncommon for private enterprise to be slightly ahead of public opinion and legislation, and this trend is a solid indication that shooting as a hobby is finally nearing the point when it may become so mainstream as to be uncontroversial. Furthermore, in a market such as Canada, where the literal optics of firearms plays such a massive role, the continued march towards building guns that are both fun to shoot AND fun looking is a great thing for our sport, hobby, and pastime.