With SHOT Show a mere five days away, we’re continuing our series of previews of some of the more interesting goodies we’ve been hearing about – at least the ones we’re allowed to talk about.  One of the big themes that looks to be emerging this year is ultra-compact AR-15s, with micro stocks of the PDW, or Personal Defense Weapon, variety.

These compact stocks have an interesting tie in for Canadians, with a lineage which traces back to the M231 Colt Port Firing Weapon stock, which was designed originally to allow operation of the somewhat unwieldy M16 rifle inside of Bradley armoured vehicles.  This concept of a extra-short stock was largely abandoned once the CAR stock took root and the M16 was all but replaced with the M4 within the US Armed Forces, but an ultra-compact AR-15 remained a dream for some, and the idea was resurrected in large part by Northeastern Arms, the quirky, controversial, and iconoclastically innovative Canadian startup which burst onto the firearms scene just a few years ago, working with TROY Industries as an OEM manufacturer and ultimately branching into military sales, where NEA made its fortune.

The appeal of the PDW stocks isn’t just in the look-cool factor, although at Calibre we’ll be the first to admit that that’s the primary function of all of our guns.  No, the real desire for ultra-compact stocks comes from the close protection business, which is seeing a lot of demand these days.  Perhaps unsurprisingly, then, not only has NEA had a great deal of success making organizational sales of PDW stock-equipped guns, but other manufacturers have released variations on the same concept.

Here’s a few of the stocks we’re looking forward to getting our fingerprints on: 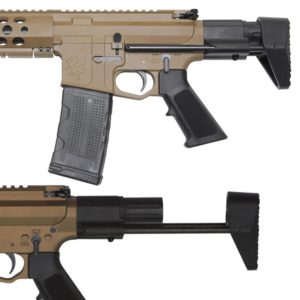 We’re not sure if NEA is exhibiting at SHOT this year or not, but we’re hoping to see the the stock there simply on account of how influential it’s been, and for comparison purposes.  They’re pretty tight-lipped on the technical specs for their CCS, or Compact Carbine Stock, but we’ve handled them in the past and there’s a reason everyone else’s version looks strikingly similar. 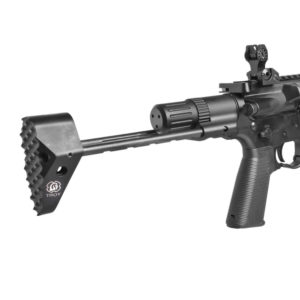 TROY promises a three inch reduction in overall length with their PDW stock, and offers a couple of versions, one that’ll run on a standard bolt carrier, and one that uses a proprietary one to get the length down to a bare minimum.  Details are limited about the current Tomahawk version, but it definitely appears to be a refinement. 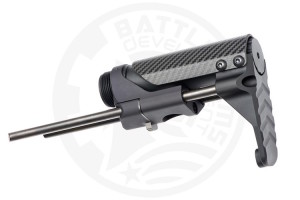 Battle Arms Development have a history of high-speed, low-drag gear that’s so beautifully constructed that it’s bordering on artwork.  The Vert stock is no exception; BAD proudly boast a 19.5 oz (553g) weight, and list materials as “aircraft aluminum and S7 tool steel”.  It’s drool-worthy, all right. 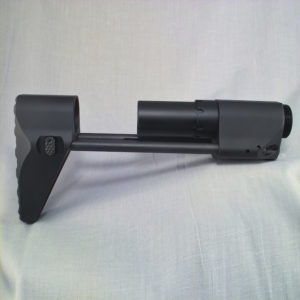 The MVB Industries ARC stock is likely the least well-known option in the ultra-compact stock wars.  They’ve relocated the locking mechanism and the ARC works with a standard buffer; MVB list the weight as 23 oz (650 g.)  We’ve heard good things about the ARC, so we’re looking forward to checking it out at SHOT.