If you ever get into the content business, whether it’s online, in print, or in TV, you’ll realize something very quickly: one of the easiest ways to generate material is to look at new products.  Sometimes that’s very valuable: there are always new products coming out and someone has to research and test and investigate them if consumer at large are going to be able to make informed choices about how to spend their money.  And consumers like to hear about the next big thing.

But sometimes, maybe, you’ll want to do things a little differently. 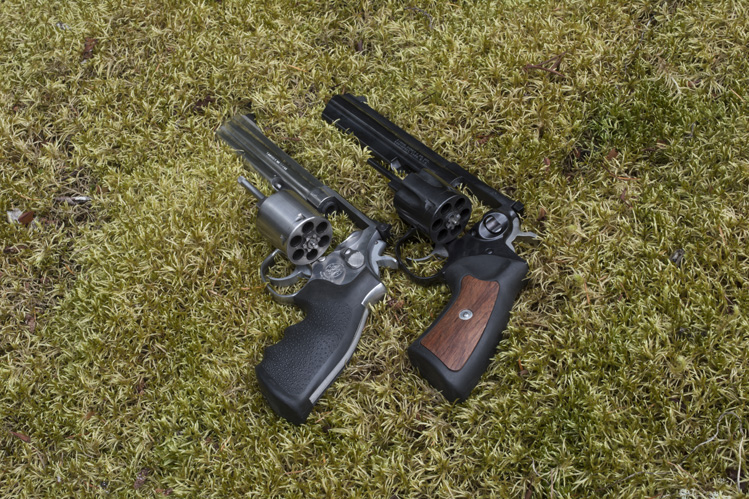 Today, we’re taking two old standbys, guns that could be found in a thousand safes across the country, and comparing them in terms of their accuracy, shootability, and construction.  Both guns were bought used, with our own cash, the sellers having no ties to the manufacturers.  Not that we allow manufacturers to influence our content, but you know what they say: there’s a need for justice to be done, and a need for justice to be seen to be done.  This is pure independent testing and we’re excited to bring it to you.

These two beauties are examples of some of the most popular .357 magnum revolvers ever built: Ruger’s GP100, and Smith and Wesson’s 686.  These are as similar as we could locate: both models are six inch, full underlug barrels.  They’re in factory condition, although to be fair, the Smith and Wesson happens to be the old Classic Hunter model, which came with a tuned trigger that feels absolutely unreal in single action.  But we’ll do our best not to drool all over it. 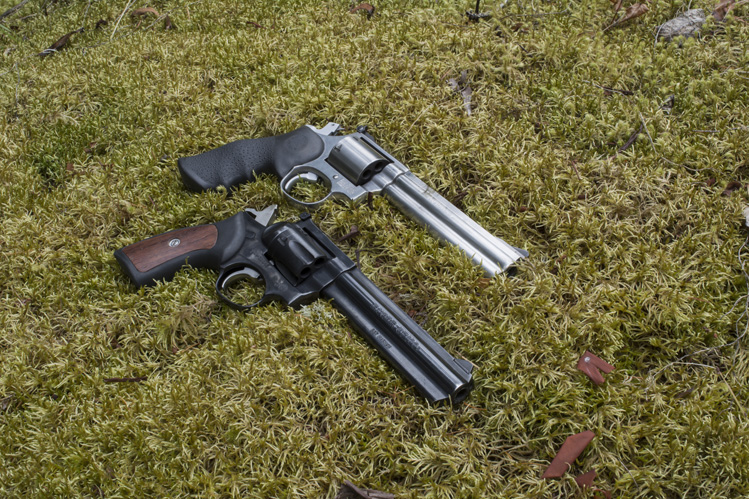 The Ruger, on the other hand, has been shot enough to have smoothed out nicely, and the double action trigger is nothing to be embarrassed about in its own right.  So let’s get rolling, and start feeding this brace of wheelguns a selection of rounds in .38spl and .357mag, and see which gun likes what, how, and maybe even why.

First let’s lay down some hard data for the sake of comparison.  The Smith 686 began production in 1980; the Classic Hunter edition hit the shelves in 1988.  Built on the mid-sized L frame, the Smith & Wesson 686 was designed around the .357 magnum, although the Performance Center did make a few .38 specials for competition use.  A classic Smith and Wesson leaf spring gives the trigger a superb feel, although in theory at least, leaf mainsprings are a little more fragile than coils (in practise, we’ve never actually seen one break.)  At around 2.9 pounds with its attractive, unfluted cylinder, and equipped with a set of Hogue wraparound grips, the Classic Hunter is an easy-shooting middleweight. 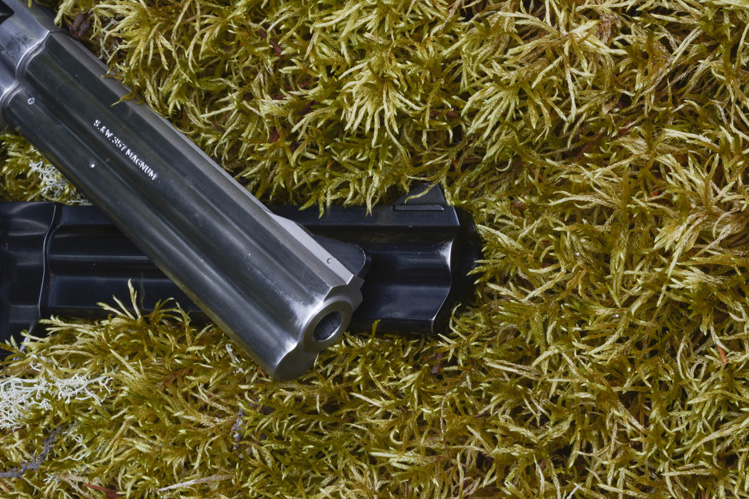 The GP100 reflects Ruger design ethos as much as the Smith 686 is a pure child of Smith and Wesson.  A somewhat blunter instrument, the Ruger GP100 also dates back to the 1980s, replacing the Security Six in 1985.  Unlike the traditionally-designed Smith 686, the frame of the Ruger terminates in a rectangular block housing a coil mainspring assembly, which is as Ruger as it gets: it’s cheaper than shaping the frame to the grip, but it also means that a grip of any shape is possible as long as it’s larger than the frame, the manufacturing shortcut thereby being turned into an advantage for the user.  The six inch edition is virtually identical to the Classic Hunter in size and weight; with identical grips there would be no discernible difference in size and the weight discrepancy is a matter of grams.  They even have the same twist rate: 1:18.75”.

And it’s that list of similarities that makes the comparison so enjoyable: these are nearly interchangeable guns, their differences being quirks of the preferences of the designers.  And, we suppose, they’re more fun to photograph when they look different, plus the fact that a blued Ruger GP100 was easier to find than a stainless one, so one’s silver and one’s black.  But that’s about it.  As such, the next question is the really interesting one: how differently do they shoot?

To get a sense of the guns’ performance across a range of ammo, we picked up the three most common factory .357 loads, and added a couple of our own handloads.  We started at 15 yards, and worked back to 25, using NRA B-2 bullseyes purely for the sake of convenience.  The B-2 has a three inch black circle which makes it an easy aiming spot, and the scoring rings make it a little quicker to assess performance.  So off we went to the firing line, stacks of targets in tow. 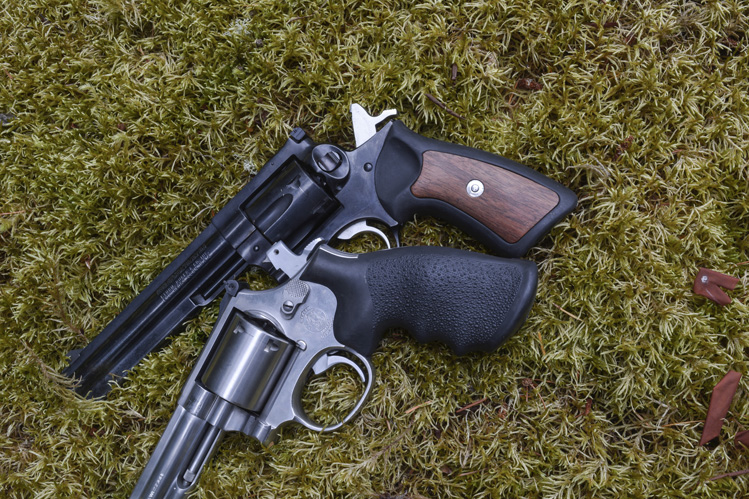 We began by warming up with handloads as we can make them by the case lot; using cast lead semi-wadcutter 148 grain bullets and titegroup powder they’re practically free.  After a few cylinders full we moved on to copper plated bullets, but we weren’t making much of an effort to shoot for accuracy yet.  We reserved most of our efforts for the factory ammo, since our handloads were never meant to be more than cheap bulk plinking fuel.

The factory ammo was from American Eagle, Blazer, and Winchester.  The American Eagle stuff was 158 grain jacketed soft point; the Blazer was full metal jacket in Blazer’s signature aluminum cases.  The Winchester loads were classic 1980s cop loads: 110 grain jacketed hollow points.  For some reason, in the early eighties, there was a pervasive belief that the 110 JHP was the ultimate manstopper; later testing did not bear this theory out but it’s still a cool round and deserves a place in any collector’s heart. 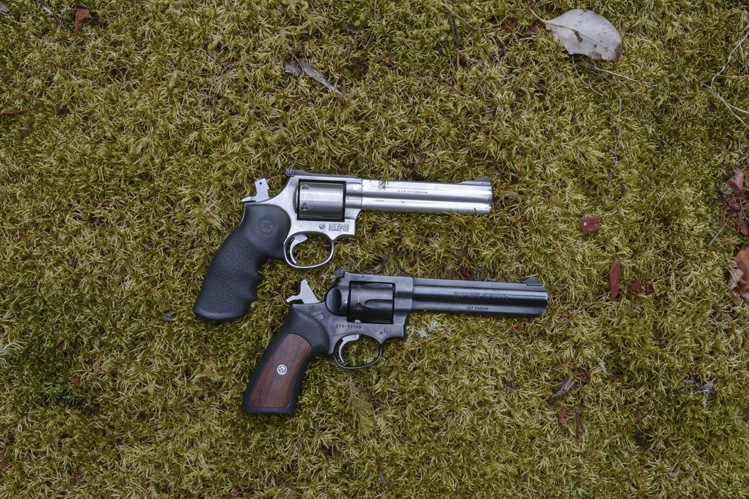 Once we got our shooting irons good and warm, we shot them back to back for thirty rounds apiece, just savouring the shooting experience.  What did we learn?

Subjectively, the trigger on the Smith and Wesson is hard not to like.  There’s no sense of “stacking” which occasionally manifests in the coil spring of the Ruger.  The Smith trigger feels slightly heavier and smoother, and the gun itself seems to absorb recoil a tiny bit better, although whether this is down to the factory Hogue grips we couldn’t say.  The differences in feel were pure hair splitting, though.  If we had had identical grips on each gun, could we have felt the difference in the dark?  In double action shooting, it would be tough. 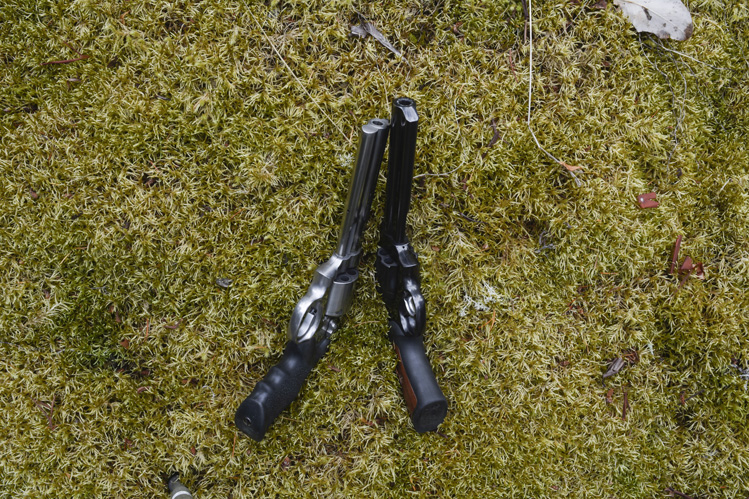 Feeling thus satisfied with the general comparison, we moved on to our stacks of targets.  We put nine B-2 targets on each backing board and went to work, shooting reloads, factory ammo, and then unwinding each time with casual fire through a reference pistol – in this case the FNS-9 we’ve been using for long term testing.

At 15 yards, performance was so similar as to be ridiculous.  We don’t claim to be particularly adept shooters with revolvers (in fact we spend so much time with service pistols we have to consciously decide to move our support hand back to avoid blasting the tip of our thumb with hot gases from the cylinder gap) but three inch groups at 15 yards were easy enough and two inch groups readily achievable.  The Ruger launched four Blazer rounds into three-quarters of an inch before we (rather annoyingly) got spooked by the success and sent the last two an inch left.  The Smith 686 liked the American Eagle more, putting six rounds into one and five-eighths inches.

At 25 yards, the differences became more apparent, although again they’re so subtle that most shooters will never see a difference.  The S&W 686 fired its best with the Blazer, putting all six in two and seven-eighths inches.  We threw that group a little low and left, but still scored 44 points out of a possible 60, if you use the rings on the target as a measure of accuracy. 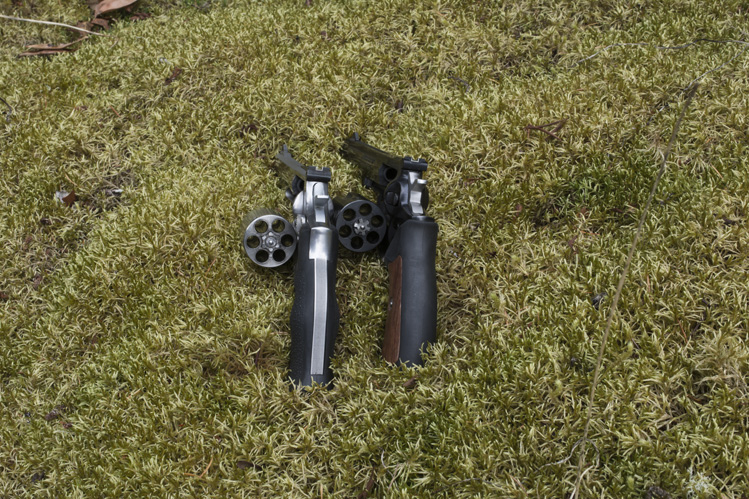 The Ruger GP100 at 25 yards shot a slightly better group, the widest spread between rounds being two and a half inches.  Irritatingly for us as shooters, we ran all the rounds a couple of inches high, which is of course an omnipresent risk when testing multiple ammo weights, speeds, and launchers, so the accuracy score was much lower, a paltry 24 on the same scale.  If the sights were dialled in for that specific load and distance, it’d be a draw, with the score in the mid-forties as well.  But when the scores are that close, tracing any difference to the gun rather than the shooter is almost certainly a mistake.

In both cases we found the Blazer ammo to be very controllable and the Winchester to be the least predictable.  The Smith 686 shot a one and three-quarter inch group at 25 yards with the Winchester with one called flyer which we pulled two inches right; the entire group was surprisingly left of centre however, and we can’t support anything left of centre, just out of principle.  Unsurprisingly, the 110 grain ammo hit lower than the heavier 158s on account of the bullet leaving the barrel earlier in the recoil cycle; it’s soft-shooting ammo but the Ruger GP100 did not like it at all.  The American Eagle was a solid performer and for general purpose applications we’d recommend it on account of the combination of bullet, accuracy, and reloadable brass.  The Blazer was impressively accurate and softer on recoil, but the aluminum cases are single-use only as far as we know. 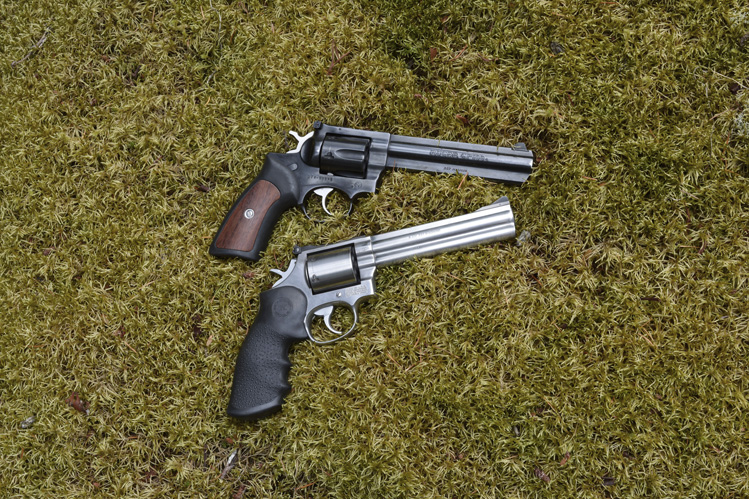 The bottom line with these two revolvers is that they are similar to the point of absurdity.  The Smith and Wesson is more refined and features a trigger that is smooth in double action use, not to mention inhumanly perfect when fired single-action.  But the Ruger GP100 is legendarily durable, and the accuracy of each gun is so similar that the overwhelming majority of shooters will never notice a difference.

In retrospect, choosing two extremely similar revolvers and putting them head-to-head had a predictable outcome: they’re extremely similar.  But we’re amazed just how similar they are.  In the end it’s just going to come down to consumer preference: if you like the Ruger’s reputation for brute durability and the frequently lower purchase price, and you don’t mind the book-length dissertation on safety they stamp into the barrel shroud, definitely go that route.  If you like the Smith and Wesson’s fantastic trigger feel and looks, and don’t mind that you’re paying extra for a gun that is almost the exact functional equivalent of the Ruger GP100, well, it’s hard to argue against that either.

There’s just no wrong answer when it comes to flagship .357 magnums.  And since we bought one of each, we’re happy about that.