Let’s say you own a big gun manufacturer, and your company builds a wildly popular rifle.  That rifle can be ordered dressed as a classic hunting rifle, or as a slightly-darker-black, detachable magazine, built-for-SWAT sniper rifle, or anything in between.  Everyone is familiar with it and every other company builds rifles to compete with it and every store sells it and almost everybody can afford it, at least if they’re prepared to save up for a few months.  And the aftermarket is absolutely enormous, since you’ve been building rifles on that action for over fifty years.

If you owned that company, would you look at that rifle and say…”nah, let’s build something way cheaper to manufacture. Instead of machining out a whole receiver, let’s just cut a hole in a piece of pipe.  Should be good enough.  After all, nobody is going to use this thing for serious precision at five hundred yards or more.”

Well, if you want to sell a rifle to magazine writers, maybe that’s exactly what you’d do, because writers are broke and a four hundred dollar rifle is all we can afford.  But you’d be wrong about us trying to shoot it accurately at a half a kilometre.  Because the thing you forgot about writers is that we are really, really weird.

Nobody can argue with the success of the Remington 700: they’ve sold five million of them.  But the receiver design is a little strange, if you think about it: it’s really open.  The ejection port is nearly half of the action.  The loading port at the bottom is practically another third of the cylinder gone, so the receiver is essentially two big steel rings on which one can install scope mounts, with a couple of bars in between linking them together.  It clearly works, but rigidity must be suffering from the 1950s manufacturing requirements, or at the very least, receiver thickness has to be substantial, if not excessive, in order to compensate for the open architecture.  But that thickness itself generates a problem, as much of that extra-thick metal has to be machined away to shape it correctly, and so the cycle of increasing production costs continues. 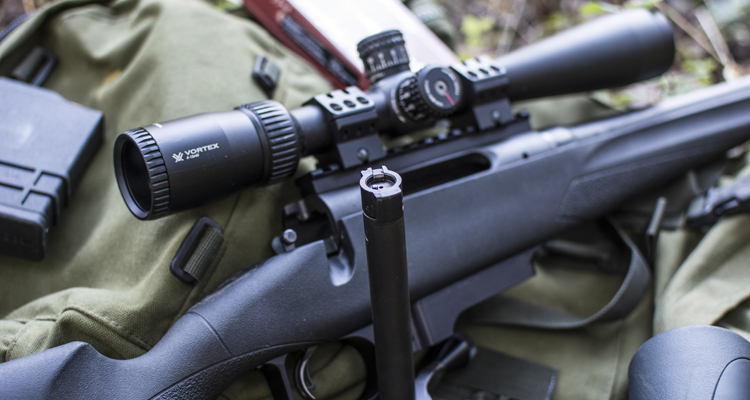 If the receiver instead began life as an actual cylinder and simply had the necessary ports cut out of it, it could be a more rigid structure without the increased mass, and the whole thing would be cheap and easy to machine.  And if it also incorporated a floating head on the bolt, plus a Savage-style barrel attachment in which the headspace is controlled by the barrel nut, well, it would be an action that took advantage of modern CNC machining processes, while being highly tolerant of minor production variances.  No frills, but several near-accidental advantages.  That action, friends, is the heart of the 783.

We found ours in a local shop on sale for under $400.  Chambered in .308, with a tactically trendy 20 inch barrel, we knew we’d have cheap ammo lying around to play with, access to precision ammo if the rifle was deemed worthy, and familiar, if dated, ballistics with proven effects should we decide to hunt with it.  If successful, the 783 project would be versatile, cheap, and easily reproduced in anyone’s garage.

Straight out of the box the 783 was interesting, but divisive.  The bolt cycled smoothly, its floating head facilitating lockup with far less effort than any of the 700s we knew.  The bolt knob, however, started fights: users who gripped it with a dainty, thumb-and-forefinger hold loved it.  Simple-minded goons like the editor who bought it use a technique we’ll call “palm and ram” and hated the flat profile.  But the overall design is sound: the travel surfaces on the exterior are smooth and blued and run effortlessly in the receiver, even if forced in a cockeyed direction by a ham-fisted editor.  The two lugs cam easily into place and the extractor, a short, spring-loaded claw necessitated by the floating bolt head, has no shortage of grip on the brass, nor does it hang up when stripping a new round out of the magazine.

Opinions were also divided about the aesthetics of the rifle: battle lines were drawn around the terms “sleek” and “cheap.”  Certainly the factory plastic stock will win no awards for finish or for feel, but hey, it’s a budget rifle.  Rather than traditional sling mounts, the 783 uses moulded-in…we’re not sure what to call them.  Holes?  Tubes?  At any rate, there are places you can attach a sling but they’re not metal.  There are metal pillars in the stock, though, so no matter how cheap it looks, there’s actually a stable basis for an accurate rifle here.

The trigger guard is also pretty chintzy, but we didn’t care, because it houses a trigger group which bolts to the action.  This is simply a product of design advancements over the last fifty years but it’s really handy: there’s no play between the trigger mechanism and the action, and if you want to replace it, it’s two bolts and you can’t get it wrong.  If you keep it, you can play with the adjustment and tune it from unusably heavy down to about two pounds.  We wanted every advantage we could get, so we tuned ours down most of the way, and for a factory trigger, it’s pretty good.

So we had a fairly thick, carbine-length barrel, a decent trigger, and a workable stock.  We hadn’t shot it yet, but we thought it might be reasonable to expect it to shoot fairly decent groups at a hundred yards or so.  And that’s how the rifle sat, pristine, unmolested, and ready, for nearly three whole hours.

And then the dremel came out. 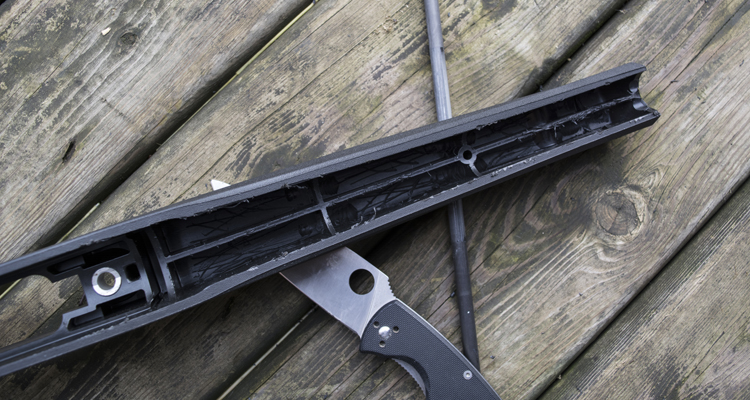 The first stop was the stock’s forend.  It was too flexible, and too close to the barrel; we expected contact during firing, which would ruin accuracy.  A rasp was used to relieve the stock, giving nearly a quarter inch of clearance at the forward end.  The floppy plastic was improved by drilling out the the moulded internal stiffening vanes and epoxying in two sections of carbon fibre arrow shaft along the length of the handguard. 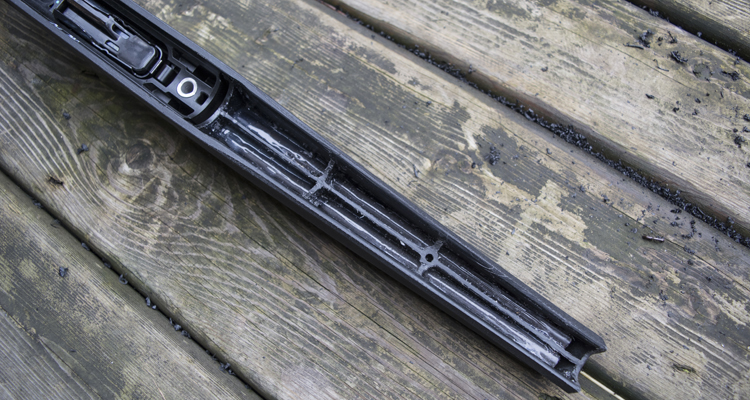 The factory pillar bedding was better than nothing, but it didn’t take much effort to open up the plastic around the pillars, build up some temporary plasticine dams around the barrel nut, lug, and receiver edges, and bed the whole assembly into place.  What did we use for bedding compound?  Why, JB Weld, of course.  It’s metal-infused epoxy, so as long as the surfaces of the nylon stock are heavily abraded, the JB Weld sticks on permanently.  The metal surfaces of the rifle were coated heavily with Turtle Wax prior to bedding so the bedding compound wouldn’t stick.  Sound like a cheap garage fix?  It certainly is that.  But it works well, and the bedded action had to be tapped out with a rubber mallet after the compound set.  For around twenty bucks, we turned the droopy stock into a lightweight rock. 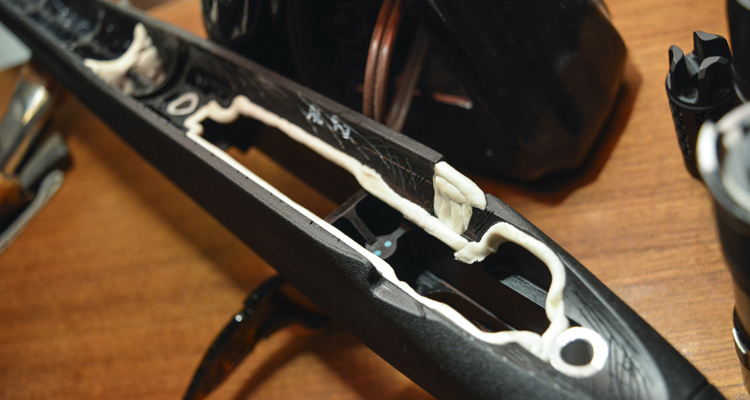 Of course, the bolt knob still nagged at the gorilla-handed owner, as did the factory magazine setup.  It fed well enough, but the capacity was, of course, not very tactical.  And the trigger guard?  Not even a little bit tactical.  Ordinarily that wouldn’t matter, but we had a scope on hand that seemed well-suited to the 783: the 4-12×40 Vortex Diamondback Tactical.  Well, we could hardly run around with a tactical scope on a non-tactical rifle.  What would the neighbours think? 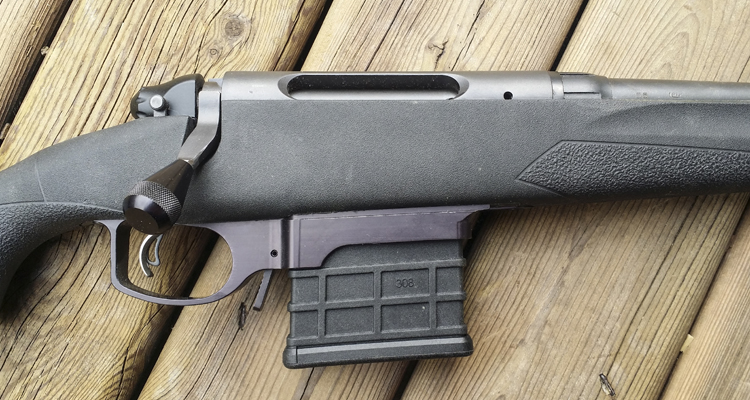 As luck would have it, the experts at the innocuously-named Pacific Tool and Gauge, or PTG, make bottom metal for the 783 which replaces the trigger guard, and accepts magazines from the equally staid-sounding Canadian manufacturer Modular Driven Technologies, better known as MDT.  And PTG had bolt knobs.  And optical rails.  And an export permit so they could mail it right to our office.  Granted, the only part we really needed was the $15 bolt knob.  But interest rates are at historic lows.  We ordered one of everything just to be safe.

And so the $400 budget compact became a $650…tactical budget compact.  The optic went on using Weaver Tactical rings for two reasons: they looked tough and they were cheap.  There was only one thing left to do: shoot this crazy beast, not at one hundred yards and not at two.  We wanted the 783 to prove itself at 500 yards, and the only place we could do that in front of a legitimate witness was in Kamloops, BC, at the Kamloops Target Sports Association’s 700 yard plus rifle range. 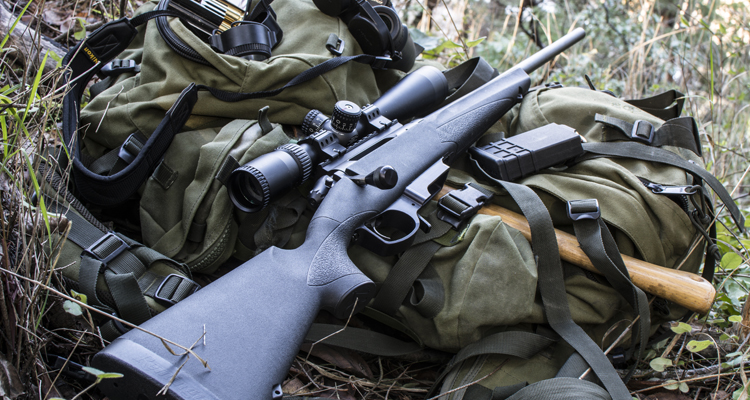 We rolled onto the KTSA range behind range officer Nick Rhodes of Rhodes Solutions, in minus ten degree weather with a stiff breeze blowing.  Rhodes, an accomplished precision shooter, former commando trainer, jumpmaster, and battle-hardened veteran from the French Marine Reconnaissance division, shrugged off the weather.  We shivered and tried to think warm thoughts.

The work began at two hundred yards, with bulk 150 grain ammo just to get the rifle roughly on task.  At that range, the wind didn’t push the bullets around too much, and the trajectory was still flat enough not to punish us severely for switching bullet weights once we got our bearings.  Fortunately for us, the wind also cooperated by choosing a direction not too far off our six o’clock, reducing the drift substantially.

We rapidly exhausted the limits of the bulk ammo getting centred up on an orange, pig-shaped gong at KTSA’s first berm, so after getting thoroughly chastised for using MOA instead of mils to measure our performance, we began to up our game by switching to serious ammo: Federal Gold Medal Match.  Rhodes, acting as spotter, guided us from gong to gong as we reached further and further out, culminating in a series of shots on a round gong set back on the hillside at 770 yards.  The 783 shot shockingly well, and we loaded in string after string of the premium ammo, firing and listening to gongs ringing faintly in the distance.

The final string of the day was on a small square gong at 525 yards, selected for its intermediate distance, its lack of fresh impact residue, and its accessibility for photography and measurement.  Shooting 168 grain Federal Gold Medal Match, in a calm moment and with the rifle rested on front and rear sandbags, we shot five consecutive rounds at a slow, deliberate pace, heard five consecutive strikes, and then packed up and headed downrange to photograph the strikes and enter the data into our log.

The group measured 4.24”, or 0.77 minutes of angle, with a mean radius of 1.68”, or 0.31 MOA.  This is phenomenal performance from a budget rifle with about $20 worth of performance enhancing modifications.  Including the optic used for this project, these results could be replicated for under a thousand dollars; even with the exotic addition of the PTG bottom metal, this is a tactical bolt monster for peanuts.

The 783 is a simple rifle.  It benefits from being designed and produced in an era of well-established CNC processes, and as such, with minor tweaks, it is capable of outstanding performance.  The development of CNC-specific design has given buyers the ability to purchase staggering accuracy for a minimal outlay, and by choosing chamberings with readily available ammunition, guns such as this .308 can switch roles from hunter to heavy plinker to match competitor with relative ease.

Truly, this is an incredible time to be alive.