Most shooters, and definitely conscientious readers of Calibre magazine, are probably familiar with the term MOA, or minutes of angle. It comes up most frequently when describing the precision of a rifle; one minute of angle being a sixtieth of a degree, which happens to work out to a number which is extremely close to one inch at a hundred yards, it makes a convenient measurement for working out the predictable impact zone of a rifle.

There’s another unit of angular measurement that is gaining traction among precision shooters long range hunters, though, which is probably less well-understood: the milliradian, or MRAD. Each year, we see more and more MRAD reticles being offered, and with the 2015 hunting season almost upon us and this year’s gear buy rapidly approaching, we thought it might be interesting to offer up some thoughts on the utility of MRAD reticles for those of you considering new optics, or just looking to get the most use out of the optics you’ve got. 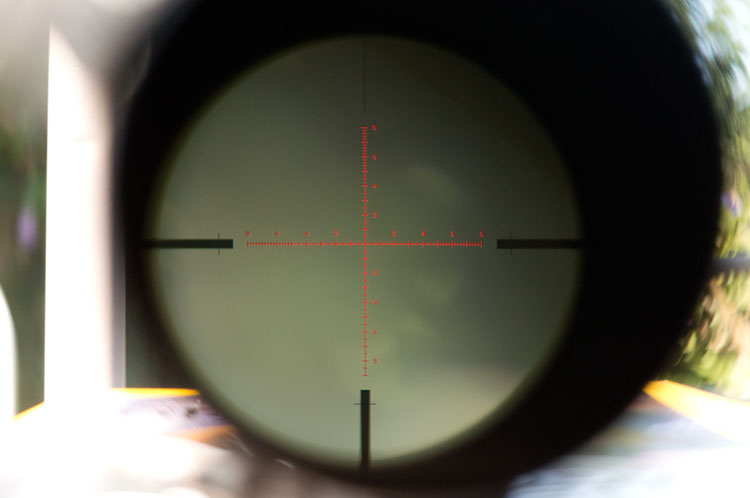 A milliradian is a mathematical concept derived from simple geometry. Bear with us and you’ll get as brief an explanation as we can give: starting with a circle, we’ll recall that the distance from the centre to the edge is known as the radius. For the sake of explanation, let’s say the radius of our circle is one metre. Beginning in the middle, if we draw a straight line from the centre to the edge of the circle, and then trace the edge of the circle for the same distance as the radius (in this case one metre) and then draw a straight line back to the centre of the circle, the angle between the two lines we’ve drawn out from the centre of the circle form one radian. Crucially, it must be noted that a radian is a fixed angle as well. Were our hypothetical circle twice as large, we would simply trace the edge twice as far, and end up with the same angle between the “spokes” as with our smaller circle; about 57 degrees.

A milliradian, or MRAD then, is one one-thousandth of a radian. So to reduce it down to shooting terms, one MRAD is a vertical or horizontal measurement one one-thousandth of the distance to your target. At one hundred yards, it’s a tenth of a yard, or 3.6 inches. At 400 metres, it’s 0.4 metres. The calculations are easy at any distance and in any units, and that’s part of the advantage of the MRAD: it’s a base ten system, and if you can move a decimal point, you can do the math. Basically, the milliradian is metric to the minute-of-angle’s Imperial system.

Now that we’ve got a basic sense of the MRAD, let’s give a bit of thought to what we can do with an optic that has an MRAD-based reticle. The first thing is going to be just getting used to compensating for elevation and wind in MRADs; if you’re using one of the ballistics calculators mentioned in our article on apps for gun owners elsewhere in this issue, that should be as easy as checking a box in the settings menu… although it’s always good form to reason it out and understand it as well, just in case your smartphone dies on you.

Where things get interesting is in ranging. The principle of determining range through an optic reticle is always the same: take an object of known size, measure it against the markings on the reticle so long as the markings reflect a fixed unit of measurement, and determine how far away it is for it to take up that little space in your field of view.

If we go back to the simple math of MRAD reticles, here’s the one equation you need in the field to make ranging make sense: The target size times 1000, divided by the MRADs the target spans, equals the range in whatever units you used.

Let’s imagine the quintessential Canadian large game animal, the moose. Height at the shoulder isn’t likely to exceed two meters; slightly under is more probable. Let’s assume a bull moose that you’d be happy to take home, but not shocked to see in real life, might be 1.8 meters, or just a smidge under two yards. If the moose, then, is visible at its full height, and it spans 4 MRADs on your reticle, then two yards, times 1000, divided by four MRADs, equals 500 yards. That moose is 500 yards away.

Now you won’t always get the full height of an animal, so let’s make it intentionally difficult by using a smaller animal, where you can’t see the full height, and which measures out at a weird decimal value of MRADs, not a convenient whole number.

That’s not necessarily an insurmountable obstacle: Books like The Hunting Rifle by Jack O’Connor actually offer numbers on the height of popular game animal rib cages. The moose is almost cheating, with a brisket-to-shoulder height of pretty close to one yard, so let’s take a different animal you might be reaching out at long range to hit: the bighorn sheep. The ribcage depth on a mature bighorn should come in not much over twenty inches; now let’s lay those MRAD subtensions on your quarry and do the math: if the full torso is 0.7 MRADs in height, then 20 inches, times 1000, divided by 0.7, will give you the range in inches, which is 28,571. Hopefully you’ve got the sense to convert that into yards: 793. Note that as specified earlier, the distance output by the formula is always in the same as the units as the measurement you start with; begin with a measurement in metres and you get metres out. Work in inches and you get inches out. In any case, you’d better know how to read the wind at that distance!

Now, the one wrinkle you absolutely must keep in mind when performing your calculations is inside your scope: is the reticle image contained in the first focal plane, or the second?

Of course, chances are if you’re making precision shots at long distances, you’ve got the temperament to go slowly and carefully and pick your shots, so it’s almost a given that you will have put in the work to know your optic, your rifle, and your ammunition well enough that you won’t confuse an FFP with an SFP scope. But if you’re used to working with one type and you switch, and are making your shot at near-maximum magnification, just be sure of the optic you’re using as you press the trigger. Bullet drop is steep at long ranges, so a misestimation of the range can result in a significant difference in point of impact.

Now take this knowledge, get out there, and get the most out of your scope!