Project Mapleseed, a volunteer non-profit association founded in 2017, is focused on a single goal – teaching fundamental marksmanship skills to anyone willing to learn. In doing so, they keep a historical Canadian tradition alive.

“We thought we would be conservative in our first year and host 4 events. We held 25 events in 4 provinces,” says co-founder Kelly Melanson Wheaton.

They hope to double that number in 2019. 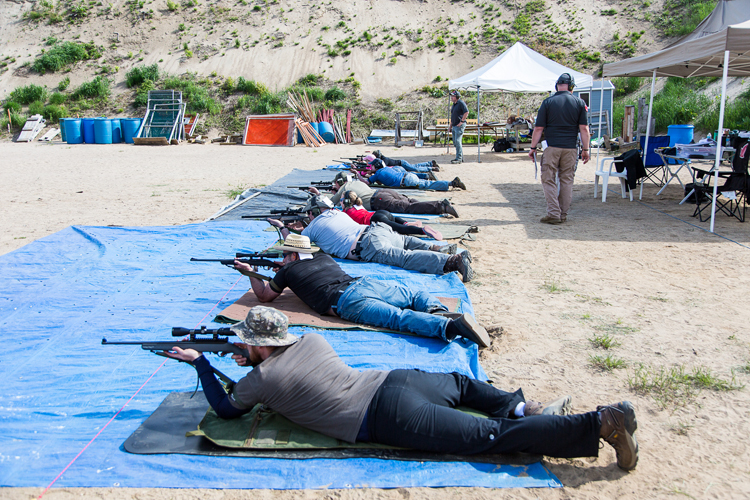 Project Mapleseed begins the shooting portion of the class with the prone position.

Organizations exist, both provincially and nationally, to promote a variety of shooting disciplines, but standards vary widely. None focus exclusively on the one thing Project Mapleseed founders desired most – fundamental marksmanship training.Rick Katigbak immigrated to Canada from the Philippines in the 1970s. While he played with guns a little in his homeland, it wasn’t until 2011, when his brother took him to a range in Canada that the “shooting bug” bit him.

“I signed up for my Possession and Acquisition License and became a casual plinker. Then I listened to an interview with Ryan Steacy (5-time Dominion of Canada Rifle Association Service Rifle Champion) on the Modern Sporting Rifle Radio podcast about this sport called Service Conditions, where they shot targets at ranges of 100 to 500 metres with running and transitions. I knew immediately I had to do it, but I had no idea where to learn how. My research led me to Project Appleseed in the United States.”

Another co-founder walked a similar path.

“I grew up with firearms,” says Project Mapleseed co-founder Kelly Melanson Wheaton. “My father and brother both hunted, but I never went shooting with them. It wasn’t until I was invited to a Project Appleseed event in Michigan that I really started shooting. I began the weekend shooting grapefruit-sized groups and left with the ability to shoot dime-sized groups. I was hooked.”

She challenged herself to become the first Canadian Riflewoman in Project Appleseed, a goal she later achieved. Now she teaches youth and women those same marksmanship skills at events all over Canada.

In 2013, Doug Crawford brought Project Appleseed instructors from the United States to Bancroft, Ontario, for the first Canadian event. The shared vision of those who would officially found Project Mapleseed in 2017 – Doug Crawford, Kevin Latham, Kelly Melanson Wheaton, Rick Katigbak and Mario Calcagni – coalesced soon after.

“Appleseed is so supportive. We wouldn’t be where we are today without their willingness to share their program materials and training philosophy,” says Wheaton. 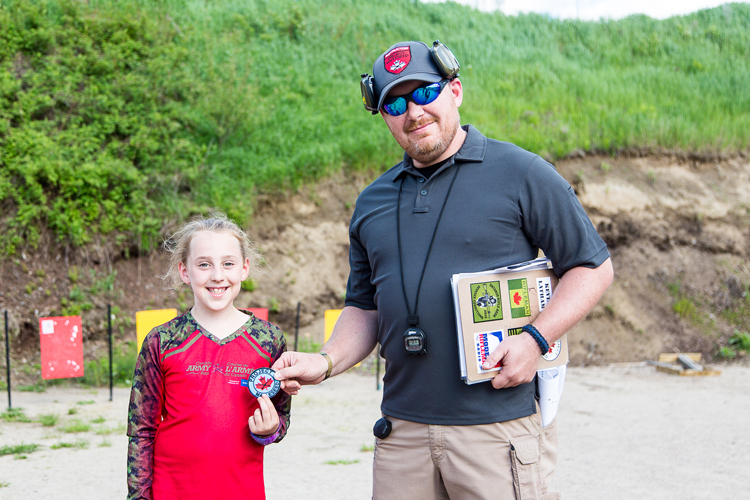 Project Mapleseed takes pride in hosting women and youth in their courses, and even offers youth- and/or women-only courses for clubs that feel like hosting such an event. Youth events cost just $15 to enter, and include the use of loaner rifles and ammunition. The only requirement is that the child be able to operate a rifle safely. Mapleseed Instructor Kevin Latham awards Fiona Tymowski with her Project Mapleseed Youth Badge.

Accessibility is a core part of Project Mapleseed’s vision. There are no paid positions or paid instructors, keeping event costs to a minimum. Mapleseed volunteers love what they do and want to pass on their knowledge to others of all ages.

“Our focus is on families, so we price our events so everyone can afford to spend the day at the range. We want everybody to be able to come out and learn to shoot,” says Wheaton.

Participation costs $50 for adults, $35 for LEO/EMT and Military personnel with ID and $15 for youth (under 18). Some host facilities also add a range use fee.

Ear and eye protection are mandatory, as is a rifle and sling with a detachable rear swivel. With 400 rounds required for the 1-day event, most people choose a .22 calibre rifle to keep ammunition costs reasonable.

Participants must bring the one thing guaranteed to help them succeed – a teachable attitude.

“Forget what you know. Empty your mind, listen to the instructors and remember your fundamental objective. You’re here to learn,” says Rick Katigbak.

While Ryan Steacy hasn’t shot a Project Mapleseed event yet (he claims he doesn’t have a decent .22 rifle) he fully endorses the organization’s focus on fundamentals and his specialty, the mental component of shooting.

“Go to any range and you can see why the fundamentals of marksmanship are important,” Steacy says. “Without getting into the equipment side of things, the major difference between those of us who shoot at a high level and the guy with the expensive gear shooting three-inch groups is we have a solid understanding of basic marksmanship skills and practice to the point where they become ingrained in our system. They become subconscious.”

Safety is Priority One

After every string of fire, instructors lead participants through the four safety rules and the six steps to making a rifle safe. By the end of the day, every participant is well-versed in all aspects of firearm safety. 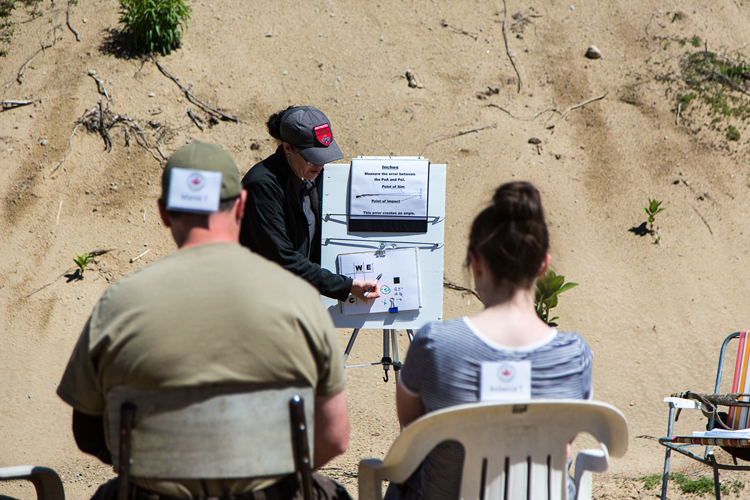 Every day begins with conventional instruction on the basics, such as the correct way to use MOA scope adjustments, taught here by Mapleseed Instructor Kelly Melanson.

The number of instructors and safety officers depends upon local availability, but they strive for a 3:1 ratio of participants to instructors. At a minimum, each event has the following:

The Shoot Boss – in charge of safety for the entire event.

The Line Boss – in charge of the shooting line and safety of all participants. This person will also point out individuals who need assistance so trainers can deliver one-on-one coaching as specific needs arise.

Range Safety Officers (RSO) – in charge of small groups of participants, both for safety and coaching. At a minimum there is one RSO at the right and left ends of the shooting line.

Anatomy of a Project Mapleseed Event

A Mapleseed event delivers hands-on instruction of marksmanship fundamentals in three shooting positions – prone, seated or kneeled and standing. Students practice and refine their skills with the assistance of instructors. The day ends with the Mapleseed Qualification Target, where the goal is to earn the coveted Rifleman patch by shooting a minimum score of 210 (of 250 possible points).

“It’s a lot harder than you think,” says Ryan Steacy. “I’ve shot their targets a few times to see what it’s about and with the mag changes, transitions from one shooting position to another, yeah, it’s quite challenging.”

At 7:30 a.m. participants register, pay their fees and receive a Project Mapleseed sticker, a chamber flag, a trigger training device that looks remarkably like a pen and a student handout.

The safety briefing begins at 8am sharp. Instructors introduce themselves and deliver a thorough explanation of the safety procedures and protocols for the event.

One third of the day is spent in the prone position. It’s the most stable shooting position with the least moving parts and allows students to gain confidence with each tiny success.

Instructors emphasise steady hold factors and how to build a stable shooting platform with your body, rifle and sling. Once this instruction is complete, participants shoot a baseline target, also known as the Mapleseed Mad Minute, to determine their skill base. 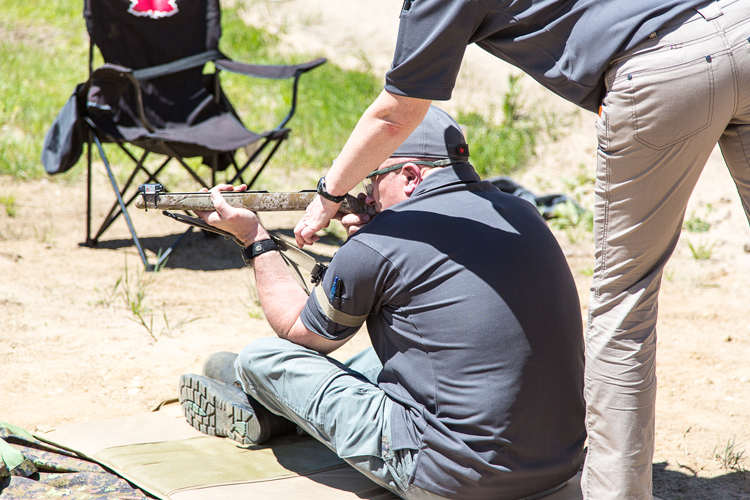 Instruction covers everything from sight picture to trigger control to the proper use of a sling.

Successive rounds of instruction are followed by shooting strings of five rounds at a target and an evaluation of the results.

For most people, groups tighten with each lesson as new skills are learned and applied. This can fluctuate throughout the day as one or more lessons are forgotten and others are added. It’s an entire system, and over the course of the day it is ingrained into students until it becomes automatic.

Then participants move into a seated or kneeling position, where they apply the skills they learned to this new body position.

The last stage is the standing position, the most difficult position for accurate shot placement. Shifting body parts make everything harder, so training focuses on how to transform the student’s body into a stable shooting platform.

Youth Only and Women Only Events

At youth events, anyone under 18 can participate for just $15. This fee includes ammunition and loaner rifles, thanks to corporate sponsors. There is no minimum age requirement. The only requirement is the child must be able to physically operate the firearm, understand and employ all safety rules and possess the willingness to learn and apply the skills as they are taught.

Women-only events cost $35 for the full day. At these events the instructors are primarily women so participants can feel as comfortable as possible.

The Road to Instructor (aka Skilled Leaders Wanted)

Project Mapleseed takes instructor training seriously. The founders realize when a student fails to achieve success, that failure belongs to the instructor, not the student.

The first requirement is to attend an event and shoot Rifleman, 210 points of a possible 250. This proves they possess accuracy and marksmanship skills and have incorporated the Mapleseed training into their personal skillset.

“We ask everyone who scores Rifleman at an event if they are interested in becoming an instructor. If they say yes, the next step for the applicant to provide a CPIC background check.” Kelly says. I imagine her eyes rolling at my unasked question. “Yes, even though all PAL holders are checked out daily on CPIC. It’s part of our due diligence.” 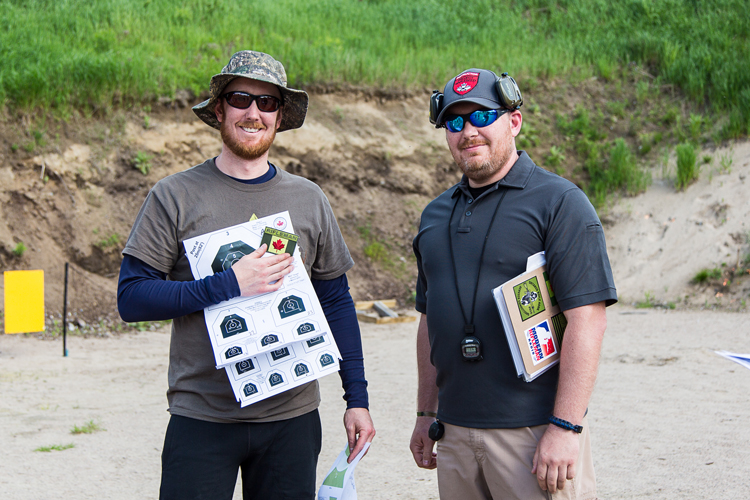 If a student scores 210 out of a possible 250, a Rifleman patch is earned, and the student is asked if they’d like to become an instructor, opening the door to the program’s expansion

After passing the CPIC check the applicant is placed into the Instructor Corps as an Instructor In Training (IIT). The main modules of this self-study course are Safety and Orientation, Points of Instruction and Administration and Logistics.

Instructors In Training must learn and deliver the Safety and Orientation module verbatim. This includes how to deliver the safety briefing, the four safety rules, six steps of making a rifle safe, instruction on ammunition and malfunctions, range orientation and line commands. Verbatim delivery ensures a Mapleseed event in New Brunswick is the same as an event in Saskatchewan or anywhere else in the country.

Only when an IIT delivers this module to the satisfaction of a Senior Instructor do they move on to Module 2: Points of Instruction, where they learn how to teach others the fundamental marksmanship skills required to shoot a Rifleman score of 210 or higher.

“We work hard to keep things as simple as possible because we have youth as young as 8 alongside shooters in their 80’s on the firing line. The course must be accessible to all of them.”

Members of the Instructor Corps must attend a minimum of one event per year where they perform RSO duties. There are monthly conference calls to coordinate instructors for upcoming events, discuss any problems people face with the self-study manual, or any other specific challenge.

At each step of the training, prospective instructors must pass written and practical exams.

For More Information on Project Mapleseed

For more information about Project Mapleseed or to find an event near you, please visit: