Before we explain how we spent two, two-and-a-half day weekends getting our brains rewired by the professional shooters and bona fide spooks at Veritac Solutions, we thought we’d better start by explaining the world of tactical firearms training.  We haven’t traditionally covered it in this magazine, but it’s a big part of the shooting world now, and we’re proud to associate ourselves with skills development, with safety under any circumstances, and with emergency preparedness.  So strap in, because we’re hitting the gas on the learning machine.

Training: What is it, and why are you doing it?

Over the last decade, the firearms training industry in the United States has swelled to gargantuan proportions, propelled on one hand by the rapid evolution of shooting doctrine generated by twenty years of western involvement in armed conflict in the Middle East, and on the other by the emergence of social media as a force for the generation of celebrities in even the most unlikely industries.

The training game has turned instructors like retired US Army Special Forces Operator Larry Vickers, or former Force Reconnaissance Marine Travis Haley, into near rock stars, and thousands of shooters have flocked to courses taught by people with similar backgrounds. 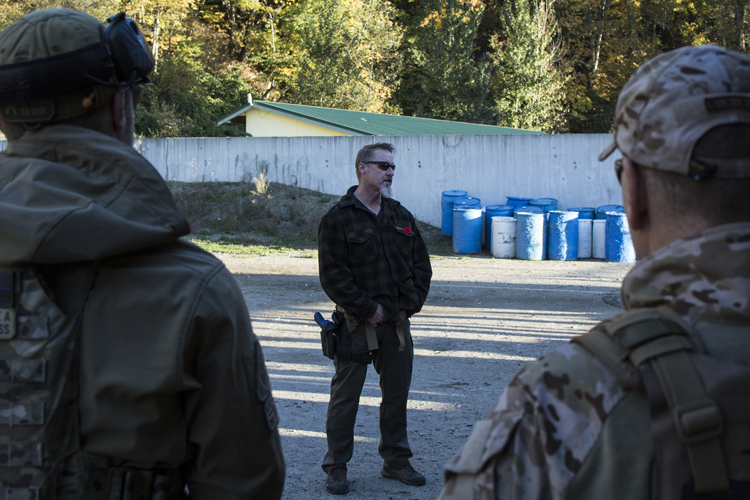 This industry, however, has been slow to expand into Canada.  Not that there hasn’t been a demand, or that no Canadians have offered the service: heavy hitters at Millbrook Tactical have been running courses for law enforcement and military clients for years, and trail blazers like Calibre’s own Ed Banner have launched companies such as Instinct Canada to expand into the consumer market, providing safety, survival and marksmanship training to private citizens across the country.  Meanwhile, American instructors have been imported to teach their curriculum at weekend training events nationwide for over a decade.

But the homegrown industry has remained small, and the training opportunities available to interested Canadians have mostly been spread by word of mouth among interested parties.

At Calibre Magazine, however, we’re big fans of professional instruction on just about any subject, from scuba diving to shooting to motorcycle racing to tuba playing.  If we’re going to acquire a skill, we want to know how to do it safely, how to do it well, and when to use which technique to get the best results (with tuba playing this involved learning the schedule of our neighbours, for example.)  We’ve seen the difference between self taught riders and graduates of racing schools with similar amounts of experience, and we’re convinced: if you want to be good at something, find an expert to train you.  And over the years, we’ve had more training than we care to remember, from premiere level instruction by living legends to down and dirty drills from bullnecked old sergeants, so when we heard that the people at Veritac Solutions were setting up a training division, we immediately wanted to get a look at the courses.

Veritac Solutions is a new company, incorporated in 2015, but the principal stakeholders are career specialists in risk analysis and protective services, with lengthy military and private sector careers.  The company is billed primarily as a private intelligence service specializing in geospacial intelligence, which is location-specific data as it relates to risk analysis and avoidance.  When we translated that from spook jargon into English, we discovered it meant that if we were going somewhere, and we wanted to know who might want to hurt us, and how we could stop them, we could hire Veritac and they would get us where we wanted to go without getting kidnapped or blown up.  That sounded ideal to us, because some of the complaints we got after making a few jokes about communists in recent issues were pretty…enthusiastic. 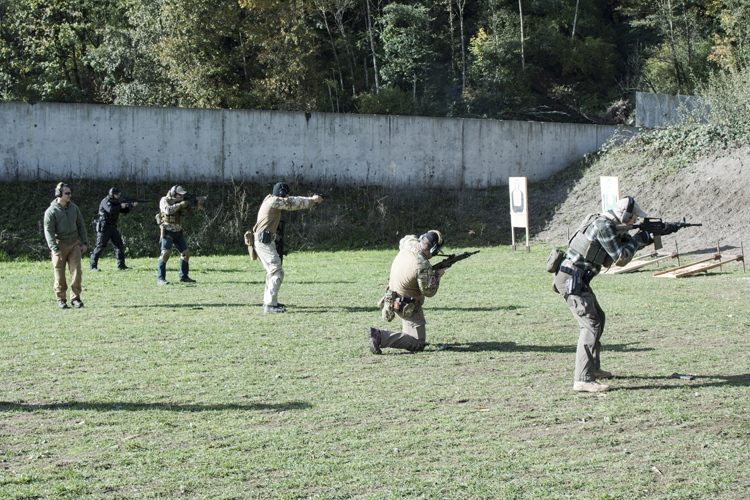 In fact, the people at Veritac are trained to deal with a lot more than angry letters.  Their training division’s lead instructor, Jeff de Groot, spent 20 years in the Canadian Armed Forces, including eleven years with the legendary counterterrorist unit JTF2, followed by 11 more years in the Middle East as a private contractor, training local armed forces and providing security for government and business interests in the region.  Assisting in the instruction was Ryan James, a CAF medic with deployments in Africa and Afghanistan, and instructor of Tactical Combat Casualty Care, or TCCC.  James’ schedule being subject to surprise private deployments worldwide, Veritac also brought on longtime collaborator Nick Rhodes of Rhodes Solutions, a former French Marine, also with an extensive deployment history both in the military and as a private contractor, and whose resume includes teaching battlefield medicine to troops in Africa’s most notorious war zones.  All told, students were being given access to a vast wealth of hard-earned knowledge, and we wanted in on the ground floor.

It turns out that the ground floor is a course called Multi-Weapon Operations, or MWO.

This is a shooting fundamentals course, taught from a tactical perspective.  A prerequisite for advanced Veritac coursework, MWO attempts to provide a uniform base so that students with no prior history of shooting in groups or on the move can do so safely and effectively. 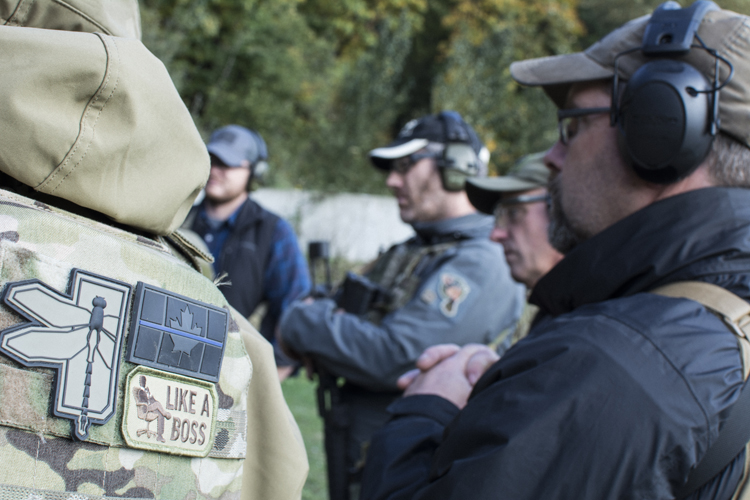 Before we even made it out onto the range, however, came the battlefield medicine module, and if there’s one fundamental we’ve ever seen get short shrift in the shooting world, it’s this: not enough people are trained to cope with serious injuries and while guns might not be as dangerous as cars or motorcycles, you can sure get hurt with one if things go wrong.  At Calibre, we’re big proponents of training to deal with worst-case scenarios (as an actual print magazine in an era of free online content, worst-case scenarios are our day to day) and the medical module Veritac provides is absolutely excellent.  In fact, it’s so good that we’re betting it sparks a trend within the training industry of including emergency medicine as a standard component of multi-day instruction.  We can’t recommend this highly enough.  Even if you never go into harm’s way, and even if you never venture into the backcountry, and even if you’re never present for a firearms accident or a criminal assault, chances are you are around vehicles, machines or equipment that can do just as much damage to a person as any firearm.  Understanding the use of tourniquets, for example, could be the difference between an injury and a fatality, and nothing drives this home like medical training, so kudos to Veritac for including it.

MWO presumes some level of skill in the basic operation of both pistol and carbine, but takes shooters from the fundamentals of sight alignment and trigger press, through shooting on the move individually and in groups, and graduates of the class move forward with a solid grounding in the basics up to and including break-contact drills in which targets are engaged and shooters time their movement and magazine changes with a partner or team to provide cover fire as others retreat.  For people without prior training in team movement, this level of choreography rapidly turns shooting from a meditative experience into a demanding one, and we were glad to see all hands on deck as instructors supervised groups with wildly varying backgrounds to ensure the drills were conducted safely.

The bottom line on Multi-Weapon Operations is that even if you don’t foresee yourself shooting in a team environment, the lessons gleaned from moving and shooting in groups apply to all kinds of shooting activities, from hunting to IPSC.  For example, muzzle discipline is something we all practise, but the difference between simply making the decision never to point a gun in an unsafe direction, and being conditioned to control one’s muzzle even while running past other shooters who are actively putting rounds on target is substantial.  We’d recommend MWO to anyone with a serious interest in any shooting activity.

The second weekend of training was entitled “Dismounted Small Teams Operations”, or DSTO.  Beginning on Friday evening, DSTO included a repeat of the medical module, which we see as a bonus.  The material is adapted from current training being provided to peacekeeping troops in Africa and as such represents the latest information, presented in a format which has been thoroughly tested and audited, so for students who take multiple Veritac courses, this is just another helping of proven, effective training. 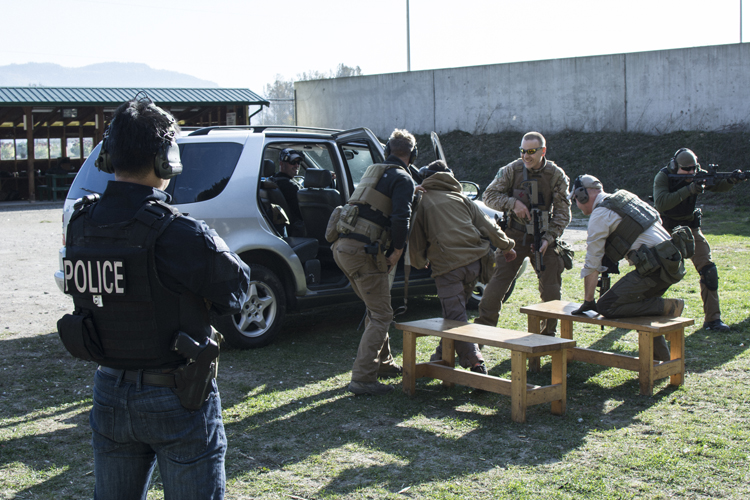 Saturday morning meant a return to the range, and the extension of the previous weekend’s skills into ever-more demanding contexts.  DSTO is, rather than being a pure shooting class, a close protection class, that is: the skills being taught are those used by protection teams assigned to get VIPs in and out of danger zones.  We’d stepped through the looking glass, and it was no longer enough to put rounds on target.  Instead, the focus shifted to doorways, choke points, diamond formations and vehicle rescues, and the stakes were raised dramatically.  Groups of people rehearsed exiting vehicles and extracting volunteer VIPs while instructors watched to ensure safety standards were met.  The sheer manpower involved in policing some of the more complex drills was impressive: at one point, five instructors were observing a single exercise with eight participants.  Even the classic Australian Peel, a break-contact technique which relies on staggered movement and continuous cover fire to allow a team to move to a defensive position, was pounded in and dissected by staff who watched from every angle.  Mistakes were noted and corrections made, and safety violations flagged immediately.  The scrutiny was, of course, warranted, but it was also constant.

For some of the professional shooters in the class, already involved in close protection work with Canadian law enforcement or overseas, the coursework was steady but manageable.  For other students, the experience was clearly approaching the limits of their abilities and instructors began to vary the pace of training for each individual fairly early on to give every student as much as they could handle, but not more.  Still, by the end of the class, there’s no way to avoid saying that some students were exhausted.  We happen to think that’s a mark of challenging training, but don’t say we didn’t warn you.  DSTO can be intense. 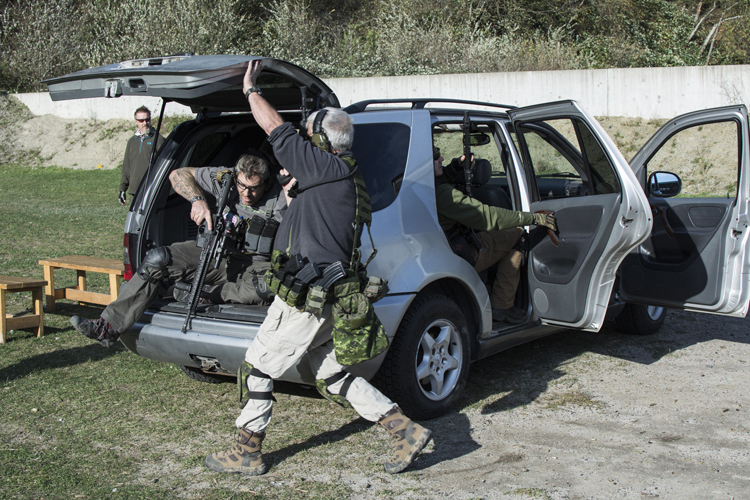 Dismounted Small Teams Operations is a very interesting class.  It goes from the classroom to the range and back several times, and includes shoot- and no-shoot scenarios.  There is a lot of movement and the pace can get hectic for anyone not actively working in a related industry. The information is specialized enough that we think Veritac Solutions is likely to see a substantial uptick in the number of agency registrations, but we’re less sure how many regular Joes will be willing to subject themselves to that kind of challenge.

On the other hand, if a challenge is what you’re looking for, and you’re not afraid of a little dirt on your shiny new rifle, well…DSTO will give you an experience you sure won’t find anywhere else.  At least, not unless you on the dotted line and get your guns and ammo provided by the Queen.  For the rest of us, or for those supplementing the training their organization offers, Veritac Solutions has the answer for you.