Since its inception, the Smith & Wesson M&P series of pistols has been regarded as a solid, high-value choice. From the basic but full-featured Range Kit to the fully optioned Pro and Performance Center series of guns, the M&P has provided hundreds of thousands of shooters with excellent handguns, and in many cases the features Smith & Wesson has baked into the M&P platform has pushed other manufacturers to catch up.

But, while things like optic-ready slides were cutting edge years ago, the vast majority of progress in recent years with polymer-framed, striker-fired guns has been directed at the trigger mechanisms. It’s no longer enough that these pistols provide accurate, reliable performance… people are simply demanding more. And since the M&P has always suffered from a trigger that ranged from passable to downright awful, it’s become a more and more serious issue for the popular S&W product. 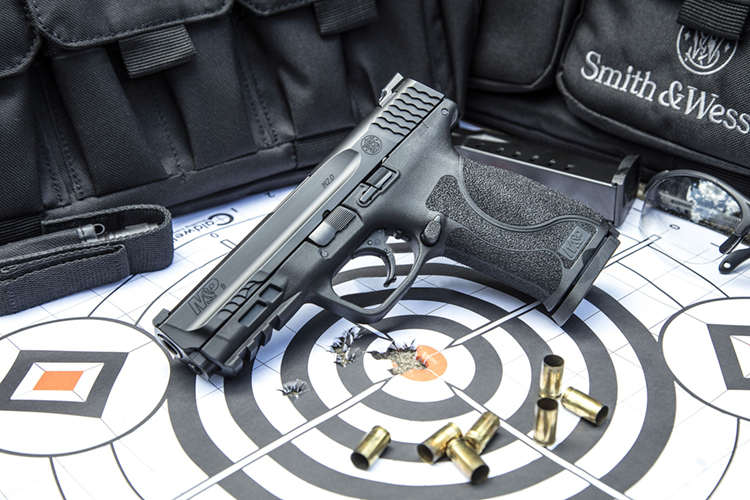 Which brings us to the Smith & Wesson M&P M2.0. Although it looks very similar to the existing M&P, Smith & Wesson’s press release announcing the M&P M2.0 highlights that this new pistol will address the existing fly in the M&P ointment, with an entirely new trigger mechanism. The goal? A lighter trigger pull and both a tactile and audible reset.

But obviously, if you’re going to roll out a handgun and call it “M2.0” you need more than just a new trigger. So, S&W has extended the stainless steel chassis inside the polymer frame’s dust cover to reduce flex while firing, revamped the grip texture to provide a more aggressive finish, and included four interchangeable grip inserts instead of three. The new fourth grip insert slots between the old medium and large sizes in what S&W is calling (obviously) medium-large.

Atop the frame, the slide has been coated in Armornite, and is more deeply excised in almost every dimension to reduce reciprocating weight. Forward cocking serrations have been cut near the muzzle. And finally, the ejection port has been opened up to aid reliability, although we’ve never had a problem with M&P 1.0 ejection… but hey, every little bit helps.

Although we obviously don’t have access to any of these brand-spanking new pistols north of the 49th parallel just yet, they are closer to consumer hands down south, where we are happy to report that even after all the revisions Smith & Wesson hasn’t changed one thing: The value proposition. Smith & Wesson has put a $599 MSRP on the M&P M2.0. Of course, with our dollar’s value, we’ll have to pay a bit more than that but nonetheless it inspires at least some confidence that Canadian M&PM 2.0 pistols will remain a solid buy.