At Calibre Magazine, when we like a company, and we like their products, we always make a point of looking over anything they do that’s new.  So when Shield PSD told us they had something good they wanted us to see, you can guess whose booth we headed to when SHOT Show opened.

We’ve written elsewhere about the Shield PSD CQS’s refusal to die despite absurd levels of abuse including being used as a baseball, being dragged behind a vehicle on a potholed Canadian road, and standing between a hammer and a nail being driven into a block of wood.

And we’ve written about the performance of their MiniSight with its one minute of angle centre dot and 65 MOA ring reticle, which lives happily on our editor’s Glock 34.  You’ll have to check out the print edition for that, but it’ll make it onto the web soon enough.

But what’s new from the British optics team?  Plenty, and more is coming, but two products grabbed our attention. 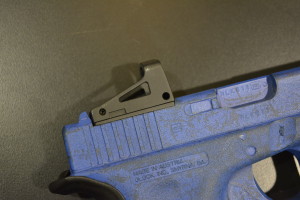 The first is a new, aluminum bodied MiniSight.  Not that the old polymer style didn’t work for us, but hey, if you can have it in aluminum, why not?  The new metal housing promises even greater durability, and if there’s one thing we like, it’s durable optics.  The new edition also allows for battery replacement without removing the sight, which is a big improvement.  The old batteries lasted a long time and it didn’t give us huge problems with return-to-zero between changes, but still, this is a much better system. 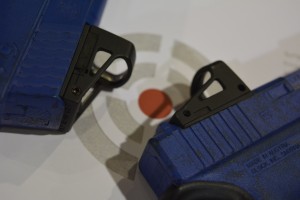 The only downside?  So far there’s no 1/65 reticle on account of the challenge of putting the more complex electronics inside the sleek new body, but we were pretty forceful in our demands to get one developed so we’re pretty confident it’s on the way. 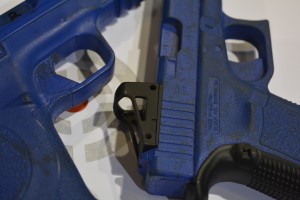 In the pictures here it’s mounted on their new low-profile MOS adapter plate, which puts their optics so low on the Glock that factory sights are fully visible through the site’s rear notch.  Not that the old plate didn’t work, but it did eat up some of the light bars on factory sights, so lower is even better. 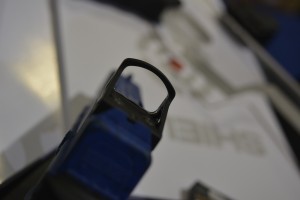 The second product that piqued our interest is a mount that we think is sheer genius.  This is easier to show than to describe, but if you’re familiar with the side-mounted battery cover and the big loonie-sized CR2032 that powers the Shield, maybe you can picture it better than we could when it was first explained to us: the battery cover comes off, and in its place, a thin, flat lever with battery contacts connects the sight to the mount. 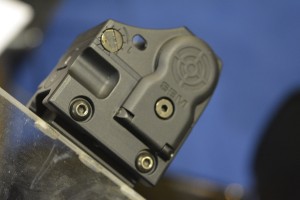 Inside the mount, which positions the CQS at the usual height on a picatinny rail…a CR123A battery!  Brilliant.  The 123s have become so ubiquitous in the tactical gun world, and the energy capacity they have compared to the 2032s, make this a real win.  Besides which, we can’t believe it took someone this long to realize that everyone with an AR15 just uses a spacer to bring the optic up to height anyway, so why not make a mount that actually does something useful? 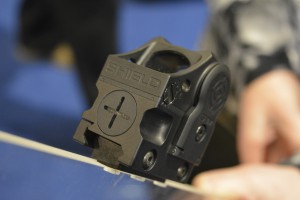 So there you have it: more good ideas from Shield PSD, who so far have been among the best-kept secrets in the tactical optics world.  Although if you’re hoping to scoop up deals on account of their small brand footprint, don’t wait…rumour has it that they have inked a major deal with firearms megastore Brownells.  We think Shield optics are finally going to get their due in the North American market. 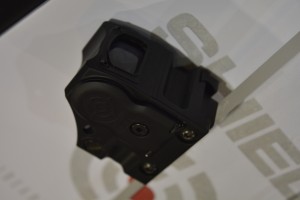