After over a month of winding down from SHOT Show we’re finally getting around to sharing what’s new from Benchmade for 2016. So all of you knife-obsessed guys and gals out there can sit back and enjoy some good old fashioned knife…errr “glamour shots.”

Be sure to check out our comparison of the Benchmade 761 and 765 versus the Chris Reeve Sebenza, the new SOCP Rescue Tool and Benchmade’s handy (and cute) Nestucca Cleaver. If you make it all the way to the bottom, we have a bonus video of Benchmade knives getting spa treatments at a complimentary (and EXTREMELY popular) service booth at SHOT Show. 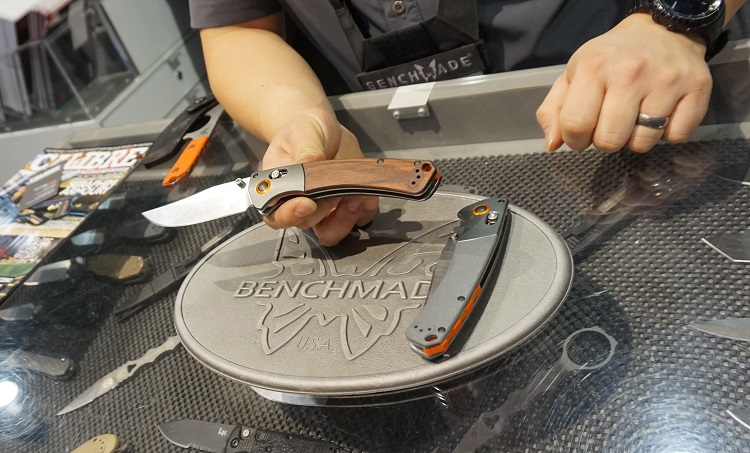 The Benchmade “15080” Crooked River folder is a 4″ AXIS lock folder aimed at the hunting crowd. It is pictured here in both available colour options: Dymondwood scales (colour “2”) and a grey G10 scales (colour “1”.) It features a non-serrated clip point blade made from S30V steel. 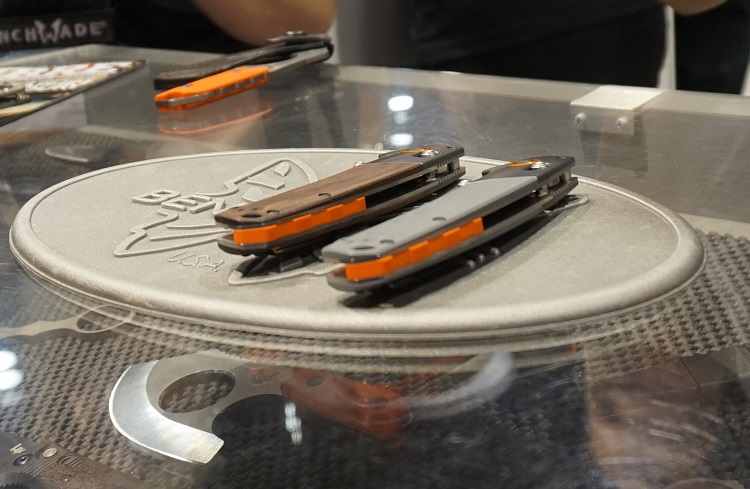 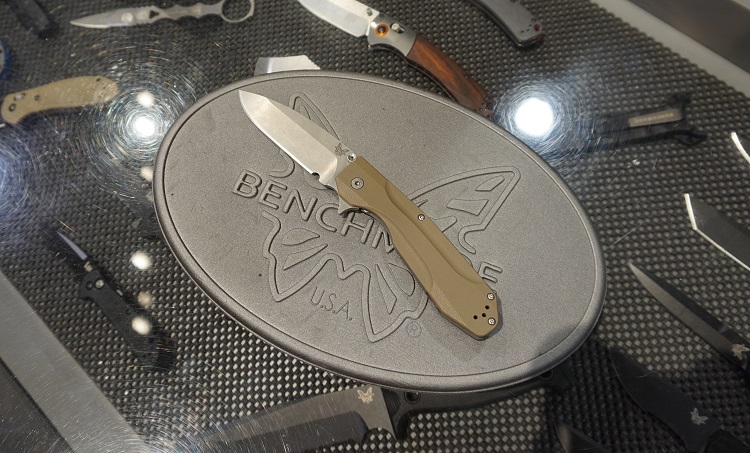 The new “928” Proxy is a titanium flipper with a monolock (i.e. Benchmade’s version of frame lock) frame designed by Warren Osborne. The front of the handle features a tan G10 wrap-around milled scale. The blade is 3.87″ and features CPM-20CV steel. Overall closed length is 5.09″. 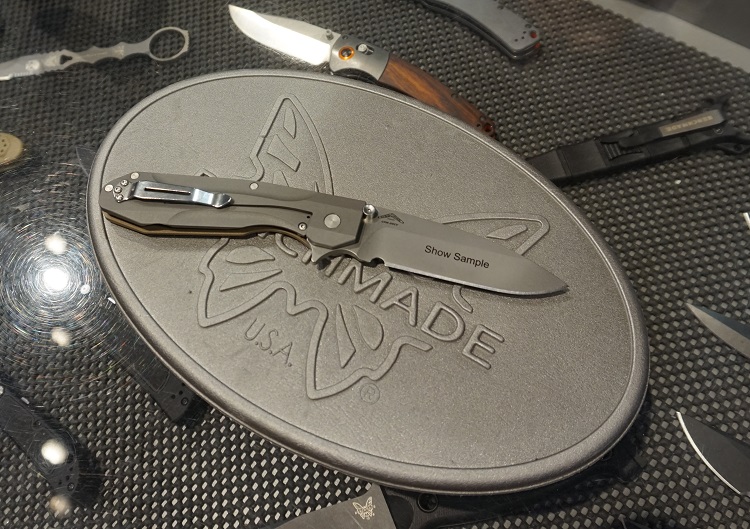 The “928” Proxy looks just as slick from the other side, with an ambidextrous pocket clip for tip-up carry. 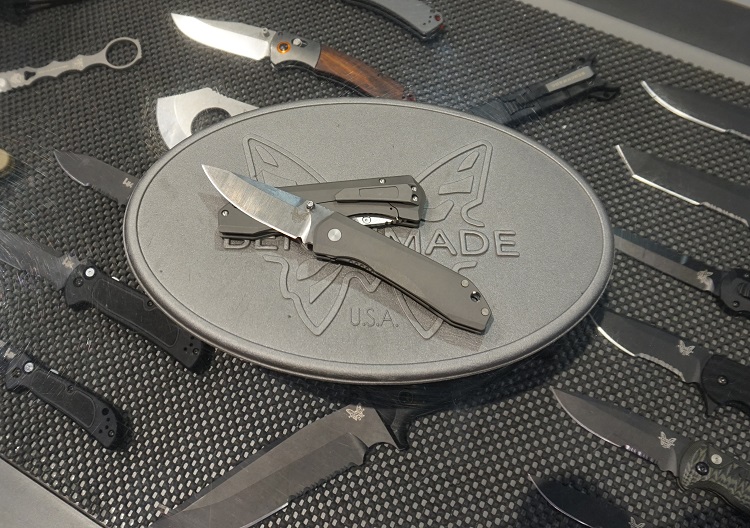 The new “765” Mini Titanium Monolock is a smaller version of Benchmade’s “761,” a sandblasted titanium monolock (i.e. frame lock) folder reminiscent of the iconic Sebenza (see our comparison below.) This smaller version features a 3.24″ blade made from M390 steel, for a total length of 7.46″ open and 4.22″ closed. 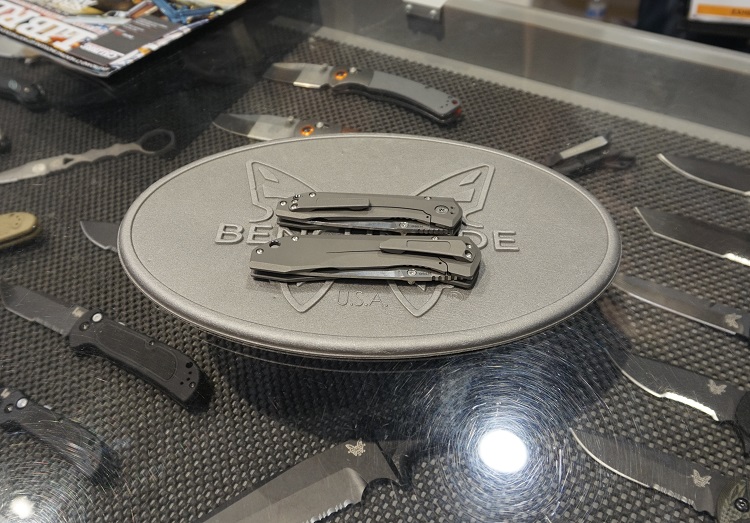 The (somewhat blurry) photo above shows the Benchmade “761” (bottom) compared with a Chris Reeve Large Sebenza 21 (middle) and the new “765” (top), which is a smaller version of the “761,” more akin to a small Sebenza. We noticed a number of similarities between these sleek, titanium monolock/frame lock folders. 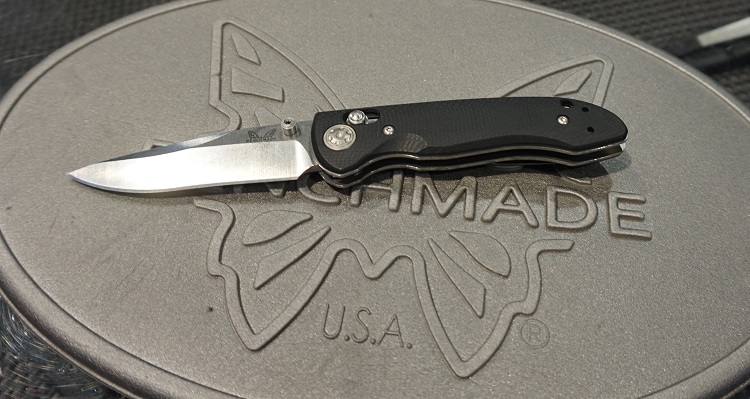 The new “698” Foray is an AXIS lock folder designed to be an everyday carry or gentleman’s knife. It features a large pivot, black G10 scales and stainless steel liners. The blade is made of CPM-S20CV steel and comes in plain and serrated versions. 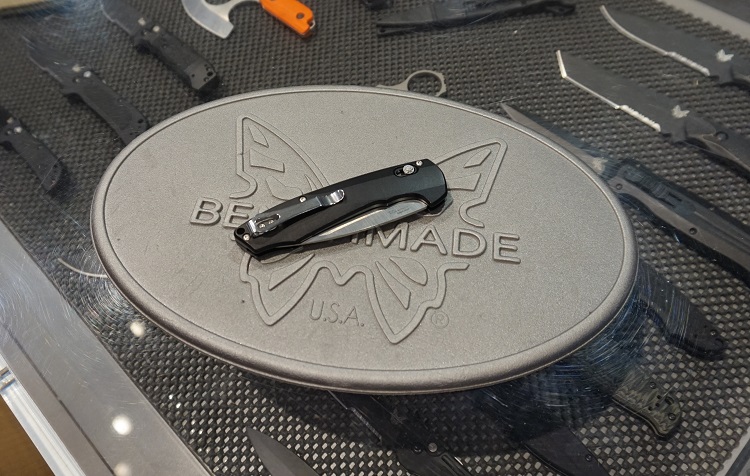 The “698” Foray is completely ambidextrous. As such, the clip is also ambidextrous, and allows for deep-pocket, tip-up carry. 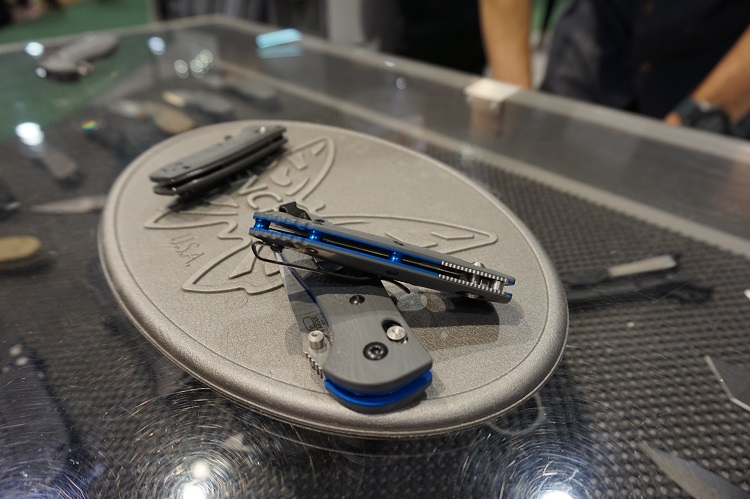 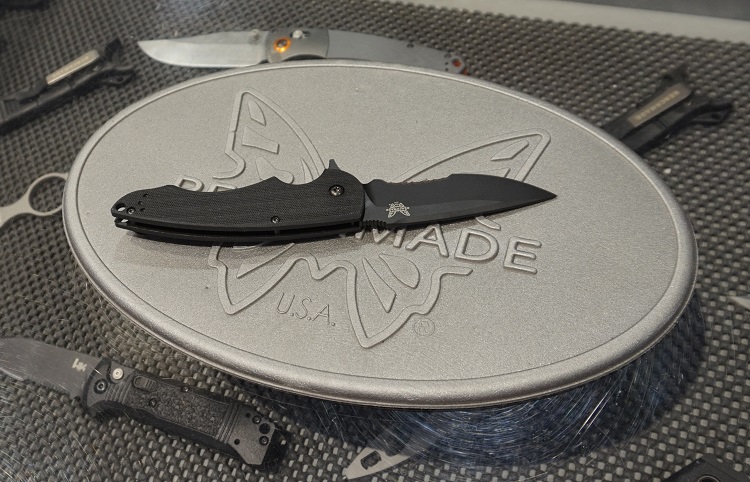 The “320” Precinct (“320SBK” pictured here) is a compact flipper with a liner lock and finger relief handle designed by Butch Ball. The Precinct features a 3.3″ blade, available in serrated and non-serrated versions, made from American 154CM Stainless Steel and available in Black (pictured here) and Satin. The handle features black G10 scales and an ambidextrous deep-carry tip-up pocket clip. 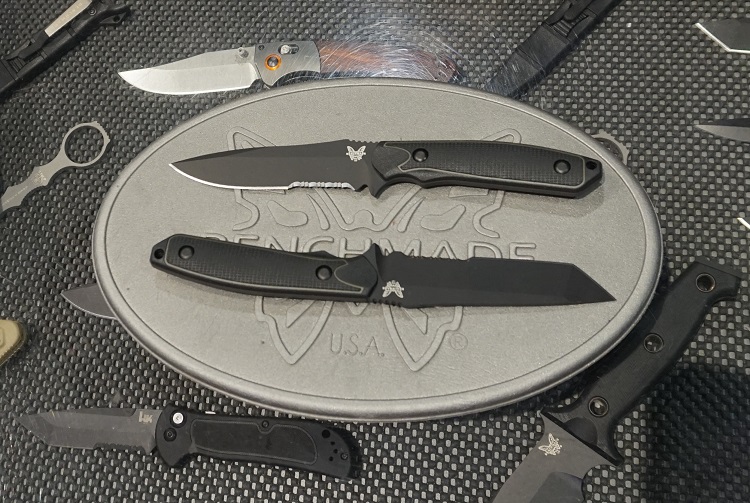 The new “167” and “169” Protagonist models are fixed blade full tang knives with rubberized handles and MOLLE-compatible ballistic nylon sheathes aimed at military and LEO. The 4.54″ blades are black coated American-made 154CM stainless steel, available in both plain edge and serrated versions. The “167” refers to a Tanto-style blade, while the “169” features a drop point blade. 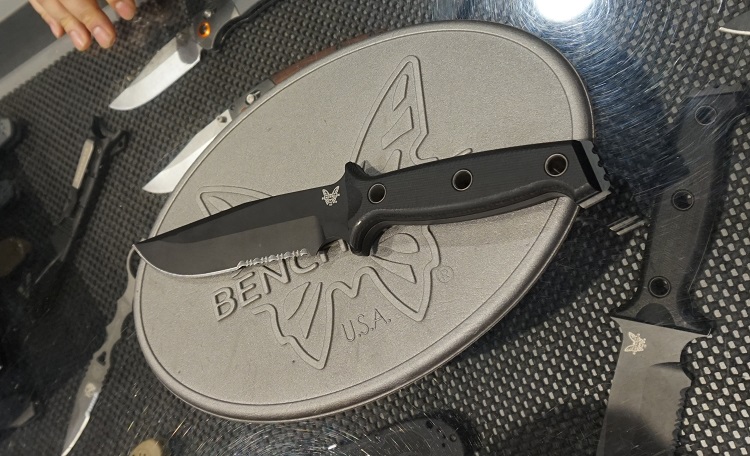 The new “119” Sibert Arvensis, designed by Shane Sibert, is a tactical knife that balances heavy duty performance with a “light hand feel.” The 6.44″ clip point blade is made from American 154CM stainless steel and the handle features black G10. 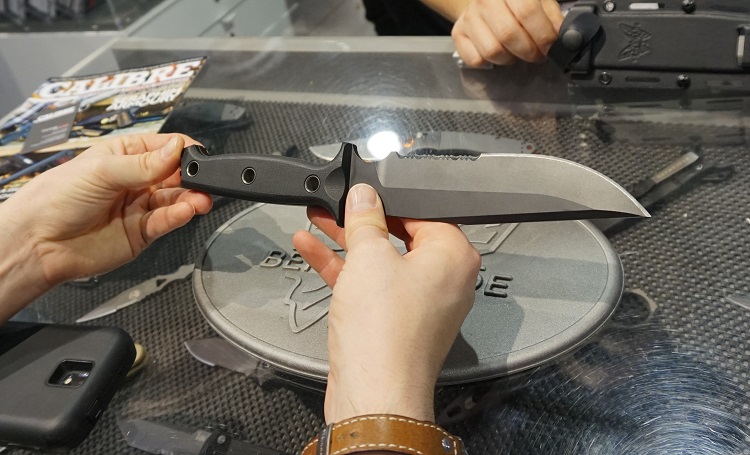 The “119” Sibert Arvensis’ blade comes in black and satin versions, as well as serrated and non-serrated versions. 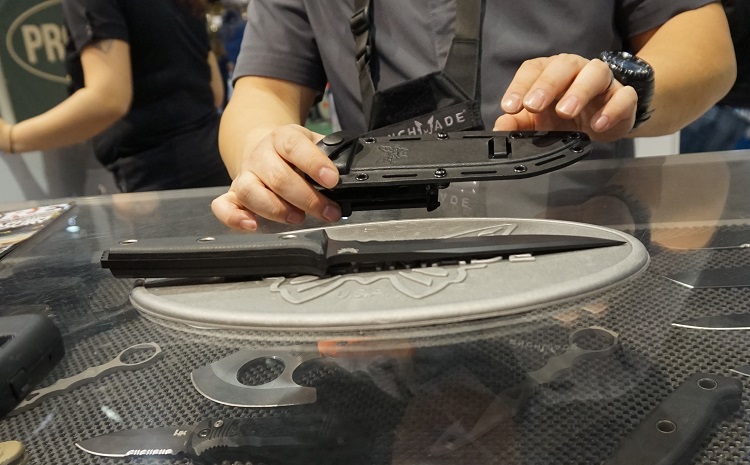 The “119” Sibert Arvensis comes with a MOLLE-compatible Boltaron sheath. 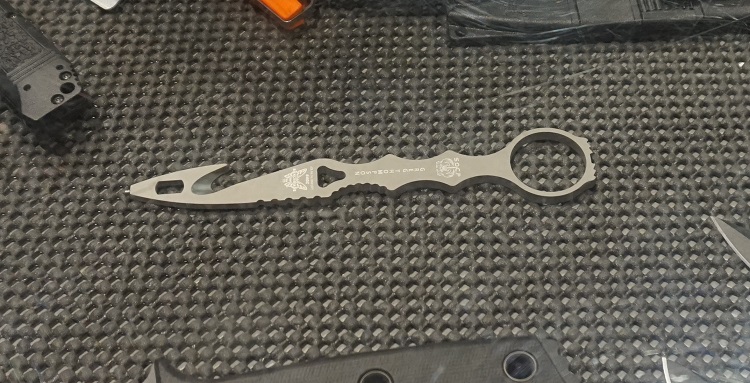 The new Benchmade “179” SOCP Rescue Tool was designed by Greg Thompson, the creator of the SOCP, or Special Operations Combatives Program, as a tool for rescue personnel to use on the job as well as to defend themselves by less lethal means than the SOCP daggers. The 6.75″ rescue “hook” is a carbide glass breaker, an O2 wrench and can be used to slice through seat belts, among other uses. The hook is made from 440C stainless steel and features a finger ring at the top for easy deployment. 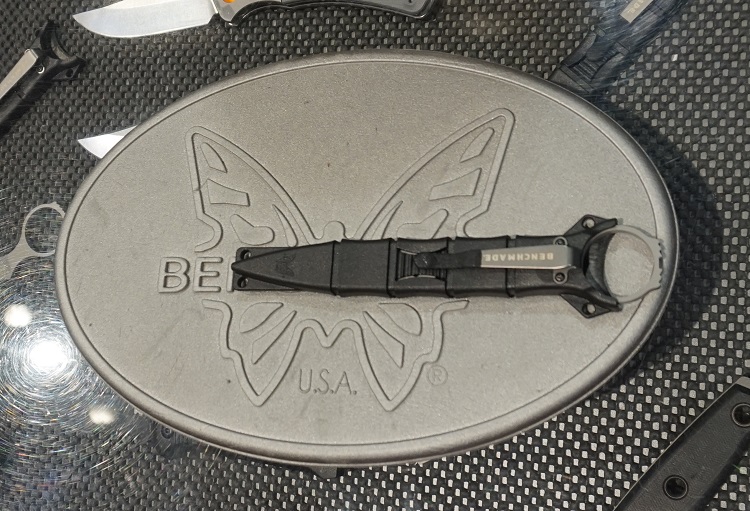 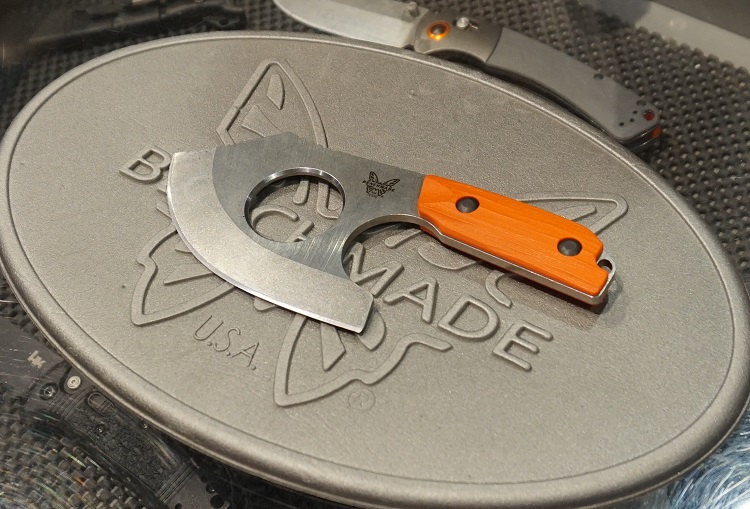 The new “15100-1” Nestucca Cleaver is based on a traditional ulu , tool with a rounded blade known for its diverse applications – though mainly used for dismembering game. The bright orange G10 handle ensures that the Nestucca won’t get lost in the bush. 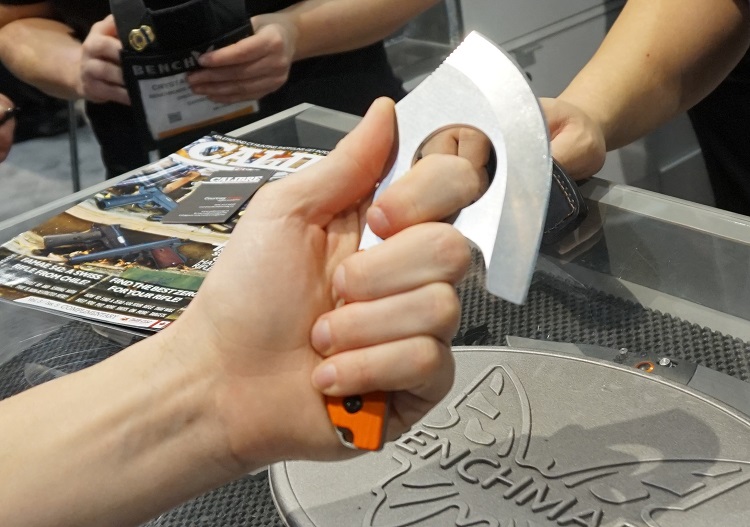 The Nestucca is aimed at hunters, with the CPM-S30V arced blade and finger hole allowing for many cutting positions, so the Nestucca can handle skinning, chopping and cleaving. 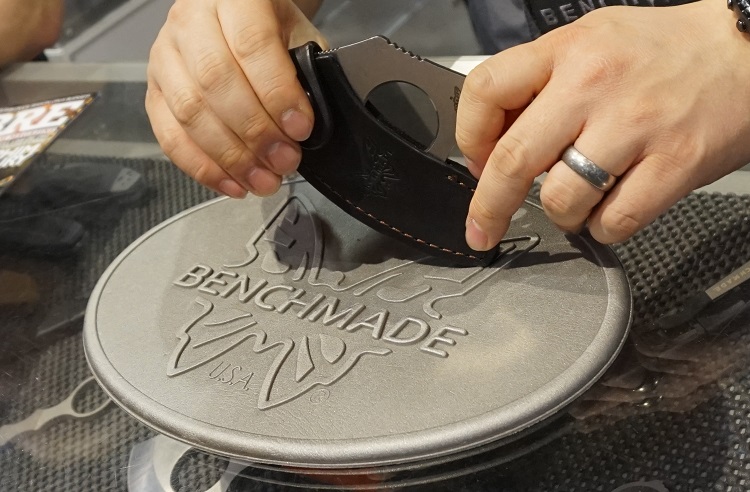 The Nestucca comes with a black leather sheath.

We also caught some footage of a Benchmade knife getting a little TLC at the Benchmade booth at SHOT. It takes about 15 to 20 minutes to restore each knife to its former glory. The service was obviously popular, with numerous owners stopping by the booth while we were there only to be told that the cleaning appointments were already booked solid. Not to be deterred, one passerby joked that he’d just have to buy a new Benchmade instead. Check it out below.