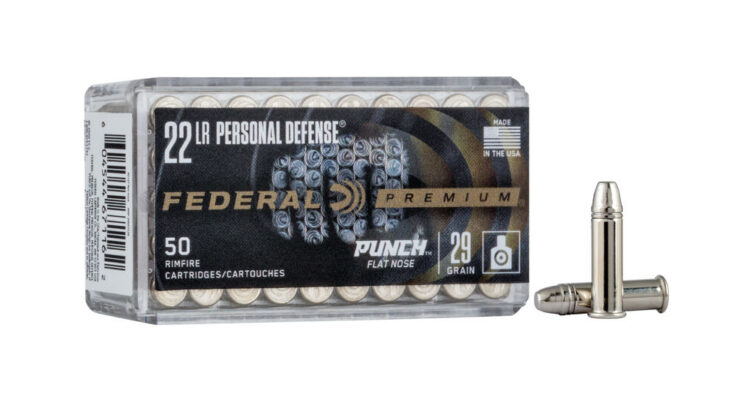 The .22 Long Rifle cartridge has been around for well over a hundred years, but there’s still plenty of room for improvement. At least, that’s what Federal thinks—the American ammunition maker now has a new rimfire offering on the market, the Punch .22 LR.

What does the Punch .22 LR do, that existing offerings don’t cover? With firearms of all descriptions currently flying off shelves in the US, there are plenty of shooters buying short-barreled handguns chambered in .22 LR.  Federal says it developed the Punch .22 LR to get maximum performance from those handguns. The manufacturer says the new round can reach 1,070 fps from a two-inch barrel.

That’s irrelevant in Canada, where snubnosed handguns are prohibited, and nobody is practicing concealed carry legally. However, Federal also says the new cartridge will hit 1,650 fps from a 24-inch rifle barrel, which will make it much more interesting to rimfire shooters.

The Punch .22 LR uses a 29-grain nickel-plated lead-core bullet. It should be hard-hitting, for a rimfire. Federal says this bullet design retains weight and minimizes expansion for straight-line penetration. It comes in a nickel-plated case, which is supposed to resist corrosion for easier extraction. Federal also says “Rigorous function testing ensures reliability.” Presumably, this means the Punch .22 LR will go bang when you want it to do so, often a problem with cheaper rimfire ammo.

In the US, Federal prices Punch .22 LR around $10 for a brick of 50. In Canada, we’d pay even more, thanks to the exchange rate and cross-border hassle, and the US ammo shortage affecting us as well.

Chances are, most Canadian shooters won’t buy this for plinking. We don’t have concealed carry, either. So who’s the ideal buyer?

Depending on their needs, hunters, trappers and shooters aiming for pest control may find the Punch .22 LR’s penetration and velocity valuable. Otherwise, it sounds like a good choice for survival-type .22 rifles, with its corrosion-resistant casing and hard-hitting design. With the emphasis on reliability in production, this cartridge could prove a good match for anyone in need of a no-nonsense rimfire.