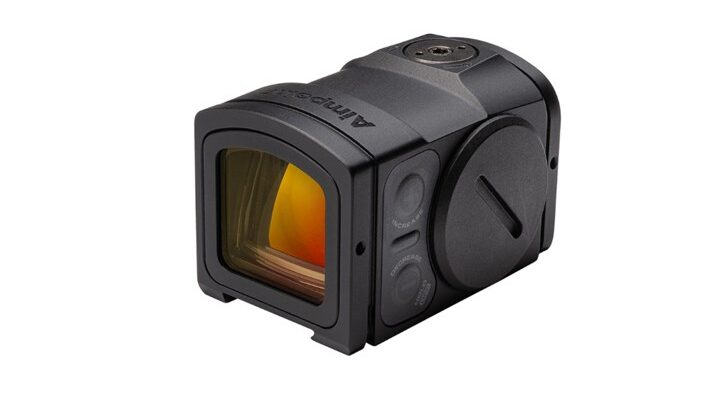 The new Aimpoint Acro P-2 solves one of the greatest problems with red dot sights: “What if the battery runs out?” Thanks to next-generation internals, Aimpoint claims the Acro P-2 has a battery life of 50,000 hours.

Just to be clear—that’s 50,000 hours of continuously being left on—or, almost six years straight. That’s roughly three times the battery length in previous Aimpoint sights. How’d they do it? Aimpoint achieved this with a new/improved LED emitter, which uses less power. They also built a new chassis for the sight, allowing them to install a larger-capacity CR2032 battery.

Aimpoint completely enclosed the Acro P-2’s optical channel, to protect it from rough usage (for instance: when mounted on a pistol slide). The company’s press copy says it can handle recoil from 20,000 rounds of .40 S&W. There’s glass protective lenses on the front and back of the sight, to protect the internals. Aimpoint’s design also allows for users to mount flip-up caps of using the sight on a shotgun or carbine. However, Aimpoint designed the Acro P-2 primarily for use on a pistol.

The dot itself is 3.5 MOA, with digital intensity adjustment keypad to adjust the dot’s brightness. The controls are next to the battery compartment; Aimpoint says this protects the power adjustments from unintentional changes. The sight comes with ten brightness settings (four for usage withnight vision, six for daylight). Of course, it’s non-magnifying optic, parallax-free at 1X power.

As you’d expect, the battery can be changed without removing the sight. The body of the sight is hard anodized 7075-T6 aluminum. It’s submersible to 35 metres, and it handles temperatures from -45 to 71 degrees Celsius. The sight alone weighs 60 grams (mounts add to the weight).

Aimpoint’s selling the Aimpoint Acro P-2 for $599 in the US, so what does that mean for CAD pricing? Currently, the Acro C-1 sells for between $700 and $750 here in Canada; given the demand, and exchange rate, and improvements, it seems likely the Acro P-2 will be higher than that.