Earlier today we discovered, by way of the RCMP Verifier’s portal to a live-updated version of the Firearms Reference Table, that a number of firearms have been moved to the Prohibited class as variants of the AR-15. These firearms include the Typhoon F12 shotgun, a bolt-action shotgun, a number of Alberta Tactical Rifle’s formerly non-restricted rifles, and the Maccabee Defense SLR-Multi rifle. We do not know if there have been further prohibitions, or if there will be.

These prohibitions are being made under the legal authority granted by the OIC announced May 1st, specifically Section 87, which reads: “The firearms of the designs commonly known as the M16, AR-10 and AR-15 rifles and the M4 carbine, and any variants or modified versions of them.” In other words, they are considering these firearms variants of the AR-15 or AR-10, and are prohibiting them as a result.

The problem with that is that the RCMP’s own documentation prior to this specifically included various comments that would seem to disallow this action. For example, the Maccabee Defense SLR’s former FRT entry includes a section for Canadian Law Comments that reads as follows: “This firearm design is derived from an amalgamation of several different firearm designs and does not trace its design lineage directly or uniquely to a “prohibited” or a “restricted” firearm found in the Regulations appended to the Criminal Code.” 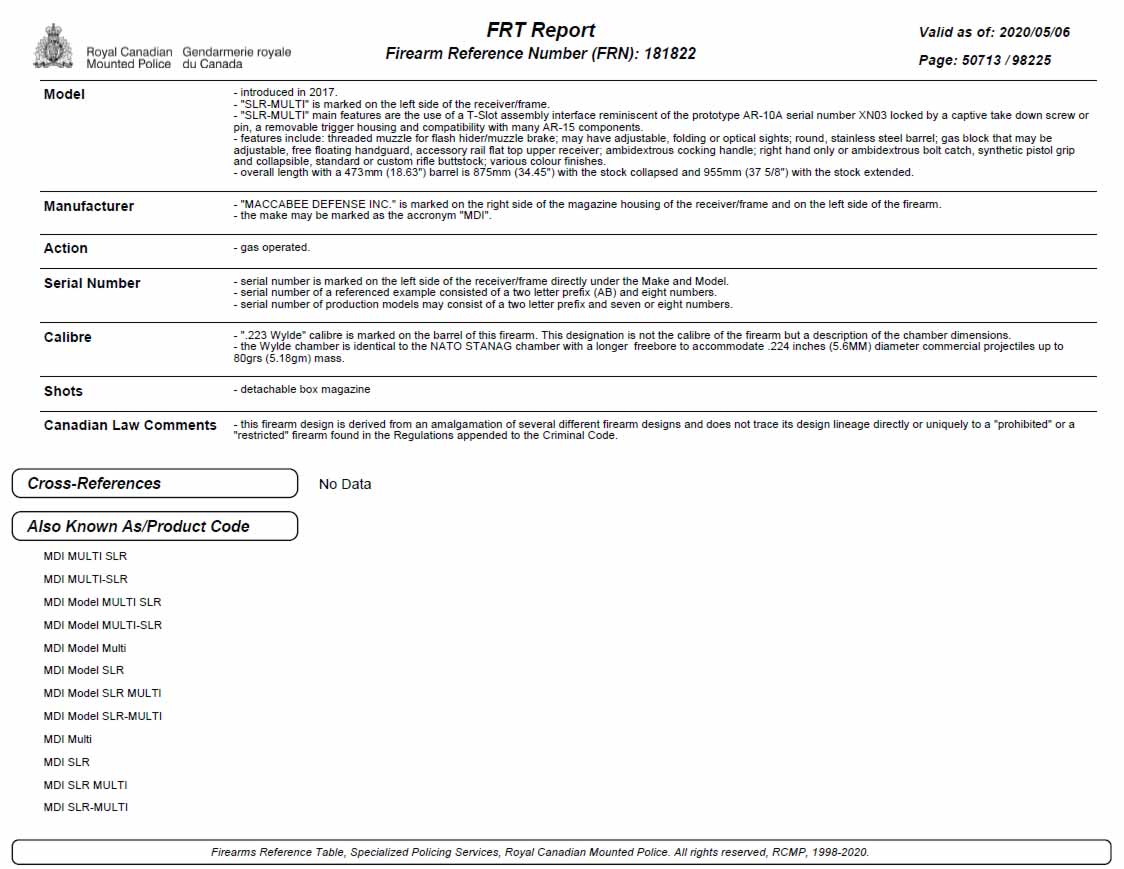 This older version of the FRT entry for Maccabee, pulled from the publicly available version of the FRT (current as of the date in the top right corner) indicates in the Canadian Law Comments section that the SLR cannot be tied to an AR-15.

“Does not trace its design lineage directly or uniquely to a “prohibited” or a “restricted” firearm.”

The AR-15 is a restricted firearm, found in the regulations appended to the Criminal Code. Ergo, in saying that the Maccabee Defense SLR is not derived from any restricted or prohibited firearms, that would indicate it is not a variant of the AR-15. And while technically one could state that the AR-10 was not a named prohibited nor restricted firearm prior, meaning the SLR could be prohibited as a variant of the AR-10, such an argument would seem to fly in the face of the comment that the SLR is both an amalgamation of several different firearm designs, and that its lineage could not be tied to the any existing restricted or prohibited firearms… given almost all AR-10s are prohibited as fully automatic firearms by the regulations appended to the Criminal Code. As such, you’d think the SLR could not be lawfully prohibited by way of the legal authority imparted by Section 87, as it certainly seems to be defined as not a variant of the AR-15 or AR-10 family of rifles prohibited by Section 87.

A similar issue arises with the Stag 10. A pre-ban version of the FRT has an even clearer statement in its Canadian Law Comments regarding the Stag 10: “The Stag Arms, Model STAG-10 firearm does not incorporate mechanical, aesthetic or other design features that can be traced directly to any particular firearm; it is therefore not considered a variant of any firearm found in the “Prohibited Firearms Regulations” or the “Restricted Firearms Regulations” appended to the Criminal Code.” 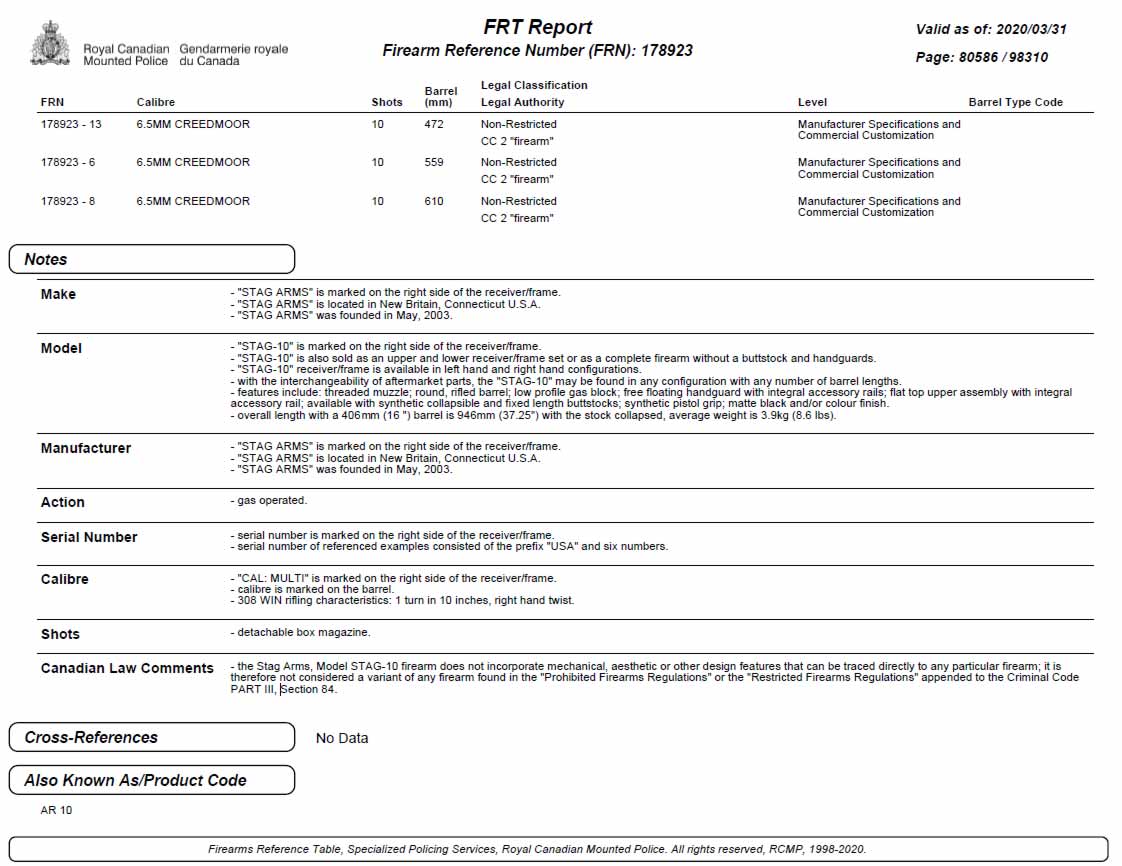 This pre-ban FRT entry for the Stag, made publicly available and current just days before the May 1 OIC, clearly states that the Stag 10 is explicitly not an AR variant.

A post-ban version of the same FRT entry, now reflecting the Stag’s current prohibited status has no Canadian Law Comments. 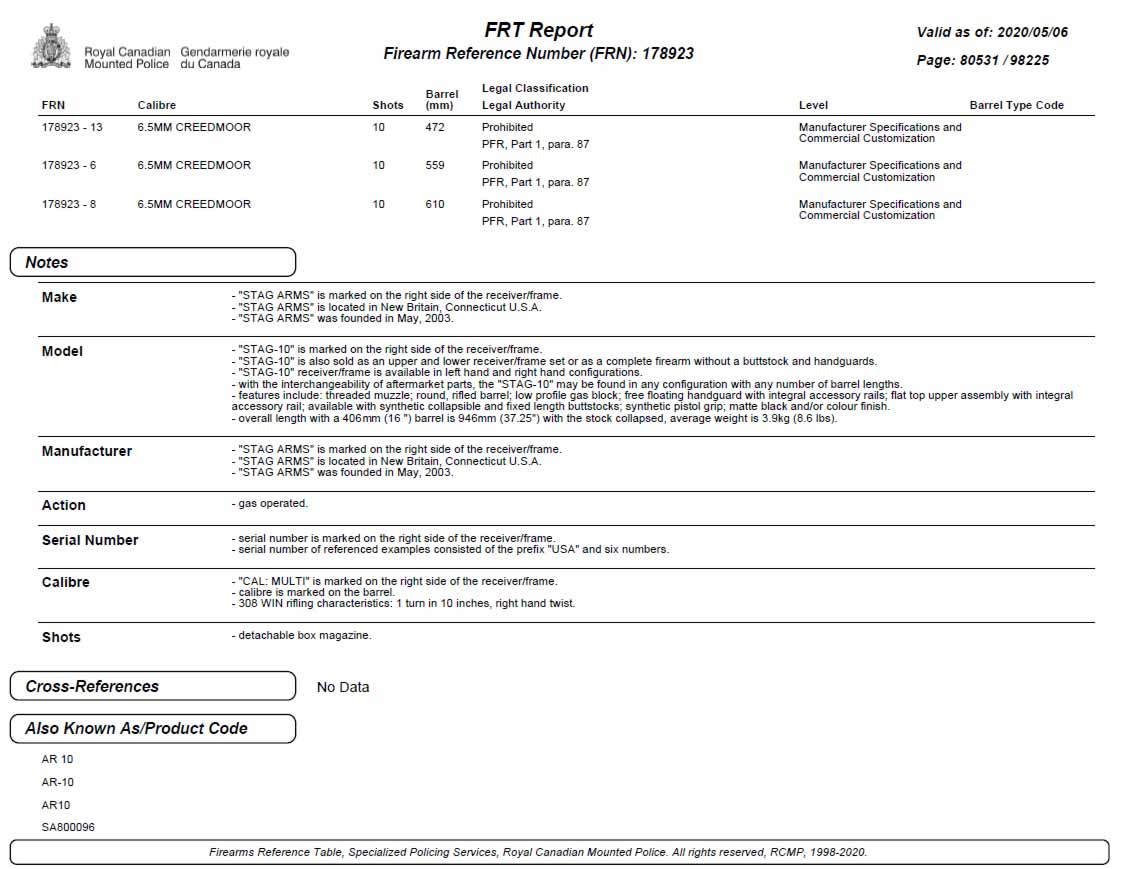 This later version of the publicly available FRT, current as of last week, indicates that the Stag 10 is now prohibited as an AR variant.

In other words, evidence of the Stag’s justification for being non-restricted; that quite clear statement, “it is therefore not considered a variant of any firearm found in the “Prohibited Firearms Regulations” or the “Restricted Firearms Regulations,” has been removed, and the firearm reclassified… a move that, according to the previous FRT data and much like what we’re seeing with today’s prohibitions, seems to be beyond the scope of the OIC’s prohibition of explicitly AR variants.

We strongly recommend anyone with one of these rifles wait for further instruction. With such strong evidence of inappropriate tampering (with regards to the legal comments and other descriptors of formerly non-restricted firearms being summarily deleted from records) and prohibitions beyond the scope of the OIC’s regulatory amendments, it is highly likely that Judicial Reviews will be employed to address this overstepping.