So what is the MKA 1919 Match? Well, it’s a gas-operated, box magazine-fed tactical or competition shotgun, constructed in the now-familiar upper/lower receiver fashion. Like many of the other Turkish semi-auto shotguns, the upper receiver fits over a protruding lip at the fore of the lower receiver, but unlike many of the other guns this one requires tools to take down. There’s a small bolt under the rear of the upper receiver that holds the two halves together. Given the manual cites potentially using a rubber mallet to separate the receivers, we expect it’s not a task to be undertaken all that frequently. 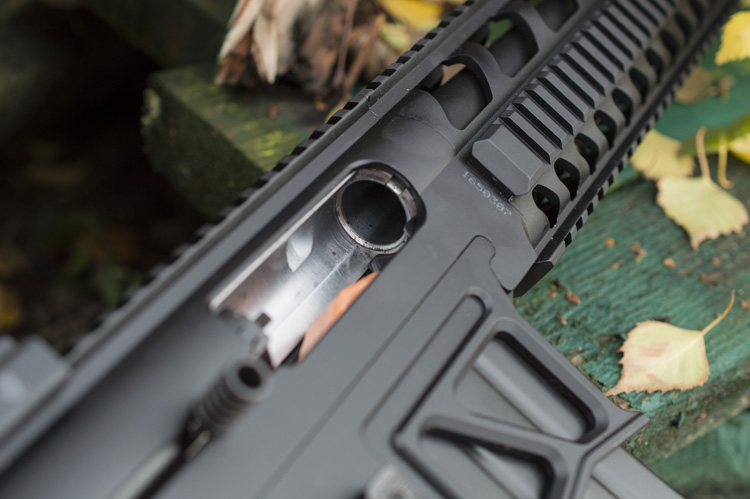 In terms of the action, while the bolt lockup is courtesy of the same style of tilting locking block that nearly every other shotgun in existence uses the Remington 870 was created, the actual gas system is a bit different than some others. Using a spring-regulated valve ahead of the gas cylinder, the MKA 1919 claims to have a self-regulating gas system, but includes two pistons. So in reality, it’s semi-regulating… but it needs some help from the owner still. The light load piston comes installed and is appropriate for all the various target loads out there, while a heavy load piston can be found in the choke case and is best used for stouter hunting loads, should you ever desire to whack geese with a competition shotgun. 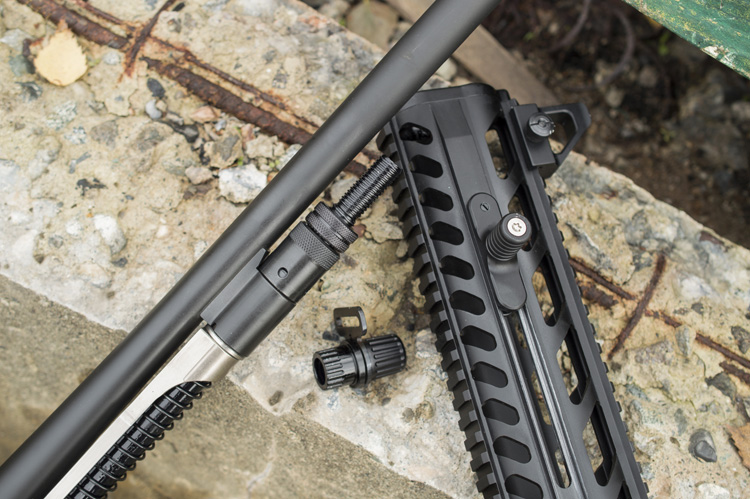 Speaking of which, the MKA 1919 also features interchangeable chokes, patterned (no pun intended) from Winchester chokes. So, should you want something aside from the full, modified, and improved cylinder chokes the gun ships with, there’s plenty of available.

Otherwise, there’s plenty of additional features that generally form the meat and potatoes of these sorts of guns; there’s a pair of QD sling mounting points on either side of the three-position adjustable stock. An additional sling swivel lives on the gas system cap that retains the handguard. A single-point sling hook point is affixed to the lower receiver extension for those shooters that feel like having their knees beaten on by their shotgun muzzle. The pistol grip mimics that of an A2-style AR grip. It’s all very “tactical.”

But if all this is sounding quite conventional, we would draw your attention to the left side of the handguard. There, you’ll find a non-reciprocating charging handle. Yes indeed, this shotgun does have a plurality of charging handles: One reciprocating handle firmly attached to the bolt like all semi-auto shotguns have, and a second non-reciprocating charging handle on the left side of the barrel assembly. This second handle operates the action by interfacing with the collar aft of the gas piston. Pulling this charging handle rearward essentially simulates the gas system operating the shotgun, albeit without the gas piston itself moving. Push the handle forward, or allow the action spring to push it home, and a spring loaded detent holds the changing handle in place. 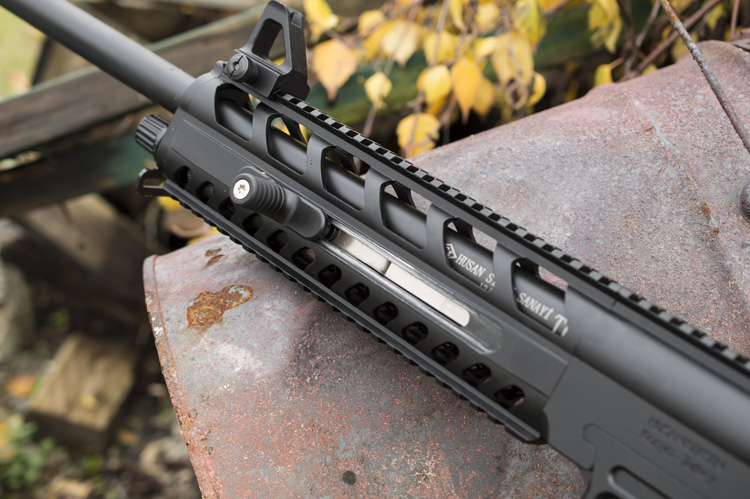 And that speaks to the MKA 1919’s intended market: Competitors. Yes, with the fully quad-railed handguard and AR-style look, it may appear overtly tactical in nature but the MKA 1919’s natural habitat is a 3-gun match. And it’s built around that ethos. With a skeletonized magazine well, ambidextrous controls, a massive bolt release, and an oversized magazine release the term “Match” scrawled on the receiver isn’t just there for looks.

In order to test the MKA 1919 Match’s performance in that sort of setting, we took a variety of relatively light target loads and a few slugs out to the range to see how it performed. One thing was immediately obvious: Being pretty well versed in the AR-15’s manual of arms certainly helped us with the MKA 1919 Match. Where conventional semi-auto shotguns force you to retrain loading techniques, ammunition storage and access, and control systems, the MKA loads, handles, and shoots pretty much like an AR-15. 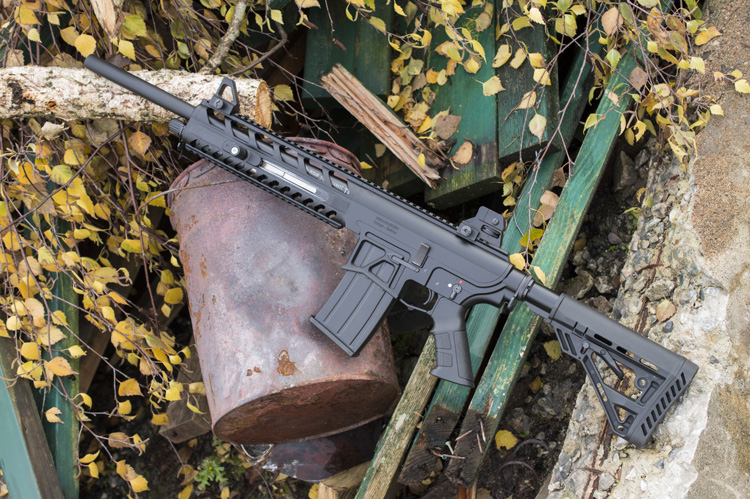 In terms of reliability we had no issues, which is impressive given the gun went from the box to the range, with nothing more than a cursory squirt of G96 on the moving parts. We did note, however, that using the forward charging handle on the left hand side is seem to result in some binding, which required additional oil throughout the day. When we got home we found this was due to the aluminum charging handle galling on the aluminum track upon which it rides. Cleaning the track and applying a light coat of sticky molybdenum grease made a dramatic difference in the ease with which the handle moves. We also expect, like most of these shotguns, that a slight break-in period is expected as well.

However, no such simple fix could be found for the sights. The factory iron sights fitted to the MKA 1919 are terrible. In case you were wondering, they are aluminum (with the exception of the windage adjustment knob), but any points they gain for being stout they lose for being bad. First off, the front sight is an all-milled unit so there’s no adjustment there, nor any ability to screw in other AR-15 front posts. But the rear sight’s the real problem. First off our windage knob was on crooked, and it’s spring-loaded detent ball didn’t work, so it had no clicks nor retention of adjustment. Furthermore, the rear sight is a mix of rifle and pistol sights, with a small AR-15-like rear peep sight that can be flipped over to utilize a notched sight like one would find a pistol. Neither of these are shotgun sights. And, since our windage detent didn’t work, swapping from peep sight to notched sight adjusted the windage. Save yourself the headache; buy a red dot and take the sights off entirely. 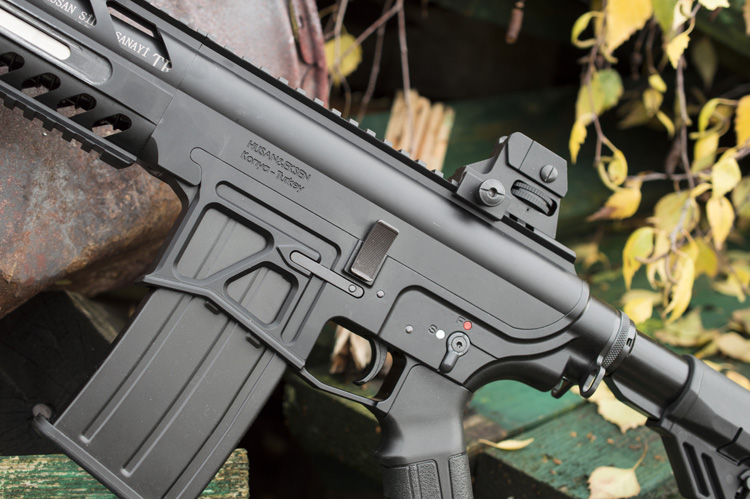 Otherwise, we saw 100% reliability, with everything down to the standard 1-1/8th oz. promo loads we put through it. Obviously with heavier loads like buckshot and slugs it had no problems, although we never fitted the heavier piston, given everything we were shooting was still in a 2-3/4” shell. The shotgun is chambered for 3” shells though, should you ever want to take it hunting. Not that you probably would, if for no other reason besides its weight; this is an 8-pound gun.

We need to mention the magazines as well, because one of the key components in any box magazine-fed shotgun is the magazine. In fact, most box magazine-fed shotguns exhibiting reliability problems can probably trace the majority of the problems back to the magazine. Like .22 LR rounds, 12-gauge hulls are rimmed, which when combined with their huge diameter, makes them very problematic to load smoothly. The MKA 1919 Match obviously never demonstrated any problems loading rounds from the magazine to shotgun, so in that sense they’re very reliable, but with some very stiff follower springs it did take some practice before we could load the magazines with shells without struggling. But they’re great magazines, with steel bodies, bright orange followers to make an empty gun even more obvious, and polymer floorplates. And yes, these beefy mags do drop free. 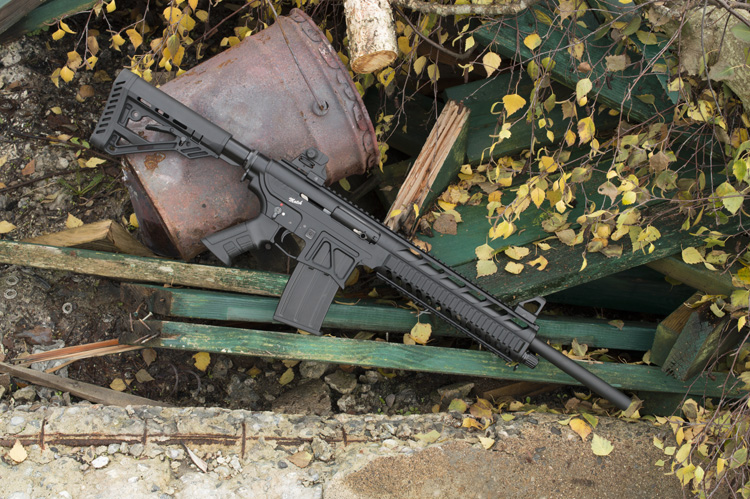 So what do you get with the MKA 1919 Match? Well, if we’re honest, you still get some of the weird design foibles that people have come to expect from these tactical Turkish shotguns. For example, there’s a single-point sling mounting point behind the receiver, but with a gun that carries most of its eight pounds out on barrel you probably will never use it. The machining is, although not bad by any stretch, still a bit behind what you’d find with Italian or American made guns. The edges on the rail sections and various cuts are just a bit harder-edged than on the guns other countries produce. The finish is just a hair shy of consistent. But, the gun carries a 10 year warranty, so that should help assuage any concerns about overall quality.

And it works. And it works quite well. With the unique double charging handle setup it’s incredibly versatile. In fact, that’s one of those features we’re looking at and saying “why didn’t anyone think of this sooner?” It just makes sense. And with the 5-round mags facilitating easy and rapid magazine changes, we can see it being very popular among competitors taking part in longer courses of fire, and those that may need to revert from shot to slug and back again… if you can remember to drop the mag and replace it before you address the last target requiring whatever ammo was in the old magazine! 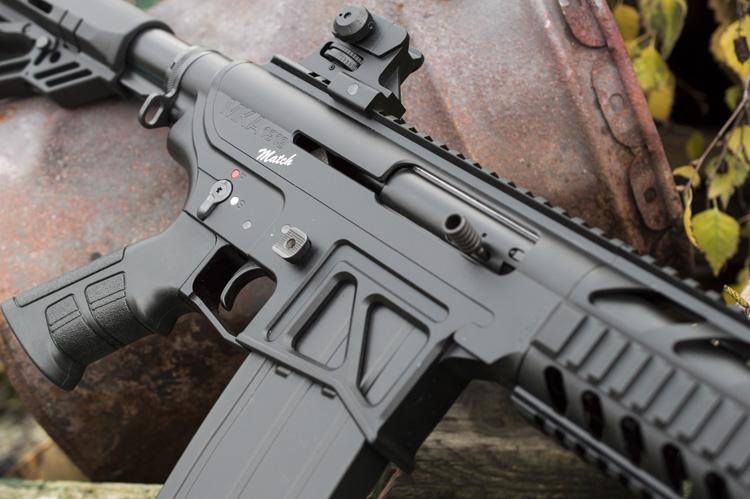 So what’s it cost? Well, that depends on the flavor you choose: The MKA 1919 Match is available with either an aluminum lower, or a polymer lower. Our gun is aluminum; 7075 T6 specifically that matches the aluminum used in the upper. Due to the machining and finishing work required for the aluminum model, it carries the higher price tag, coming in at $1050. The polymer model is obviously a bit less difficult to make, and costs a hundred bucks less, at $950. Magazines are, generally speaking, about $50 a piece. So if you’re looking to get set up for three gun, it’s not the cheapest offering on the block, but it’s also a far cry from some of the established brands like Remington and Benelli.