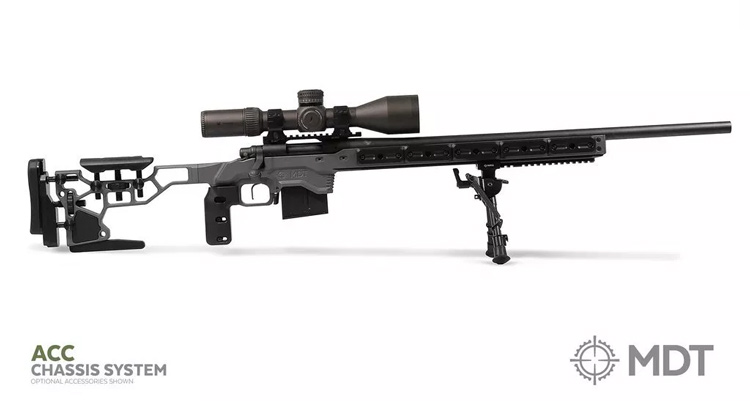 Well known for producing high-quality made-in-Canada chassis systems for a myriad of rifles, Modular Driven Technologies has found great success among shooters, law enforcement, and the military alike. But few know the company’s roots are actually in long range competition shooting. So, it might come as a surprise that it’s taken them this long to take the wraps off this: Their new Adjustable Core Competition Chassis, or MDT ACC. Here’s the press release from MDT:

“So far 2018 has kept its promises for MDT: our team is working relentlessly, releasing new products for you to customize your bolt action rifle systems, rejuvenating some of our existing chassis system lines with practical features that help you shoot better, and extending our current product offering with new inlets being released. As we slowly roll into Fall MDT is still going full steam ahead to achieve the goals that we’ve set for ourselves this year.

Today, however, we want to pause and take the time required to unveil a brand new chassis system that we can’t wait to tell you more about. It has generated a lot of excitement and anticipation internally during our design and testing phases, but also received unanimous praise from our reviewers who had the privilege of taking a first look (and shot) at it. So without further ado, we are adding the Adjustable Core Competition chassis system – also known as the ACC – to the MDT family of chassis systems for bolt action rifles.

As you can tell by its name, the Adjustable Core Competition chassis system is clearly designed for and geared toward the competition world: the ACC chassis system is best suited for the PRS & NRL shooting style. As is customary with most of our designs, we spent a lot of time collecting information from the end-users of our products. The insight we received from PRS shooters, as they shared with us which features they were looking for in a competition chassis, really helped us to develop the MDT ACC chassis system from the ground up. So let’s review these features starting with the most significant one.

We already mentioned the MDT ACC is a competition chassis system but you might be asking yourself why MDT chose to call it “Adjustable Core”. Any guesses? Well, it has to do with the fact that the weight of the ACC chassis system is adjustable. We designed this competition chassis with an integrated weight management system allowing shooters to personally fine tune the overall weight and balance point. This adjustability comes from a series of weights that can be added to either the buttstock or the forend of the ACC chassis system, taking its original weight of 5.9 lbs to a maximum of 13.3 lbs and anywhere in between. The best part is that all this modularity can be achieved without taking your barreled action out of the ACC chassis system: internal forend weights can be inserted from the front of the forend and screwed in place, while external weights were designed to be M-Lok compatible and easily attached on either side of the forend. The ACC weight management system allows shooters to rapidly adjust the feel and recoil characteristics of their system, even while being at the range.

The next feature that we knew we had to integrate to the ACC chassis system is a built-in, ARCA compatible forend. As the use of ARCA/RRS dovetail systems has exploded in the competitive rifle shooting world, MDT incorporated approximately 17” of useable ARCA rail on the ACC chassis forend, machined to RRS standard, providing what feels like infinite accessory adjustability to the shooter. As you come closer to the front of the magazine well you will also notice that the barricade stop has been extended lower and angled forward. With a total height of 1.4” this barricade stop provides a greater contact area and solid lockup with any obstacle, barricade, fence or other props that match directors creatively add to their different match stages.

Moving now to the back of the trigger guard area of the MDT ACC chassis you will notice a new MDT vertical grip. We opted for a vertical grip orientation as this is the position of choice for most competitive shooters. MDT’s vertical grip design consists of a machined core on which two polymer panels clamp on. These panels are removable and have been shaped after our original MDT pistol grip to provide comfortable hand support whether shooting prone or in position. To add to the already extensive modularity of the MDT ACC chassis system, the panels have been designed to slide forward and back allowing shooters to custom fit the grip to their liking. MDT’s vertical grip is also compatible with standard AR pistol grip boss which means it can be used on the rest of our chassis system models and those of other manufacturers as well.

The Remington 700 action and its clones being the most used in the Precision Rifle world MDT has inleted the ACC chassis system specifically for these actions. Our team designed the ACC chassis system to accommodate oversized trigger hangers and recoil lugs without any modification to the chassis. The recoil lug pocket is now sized to fit lugs which are ⅜” thick and up to 1.270” tall (from bore centerline to bottom of recoil lug). As far as the trigger hangers are concerned, the largest we’ve tested being the one on the Impact 737R action, they drop in and fit nicely. We also added a trigger adjustment slot at the bottom of the trigger guard for the single stage triggers where the trigger weight adjustment screw is located on the bottom, making this feature accessible without having to remove the action from the ACC chassis system. The list of all compatible actions with the ACC chassis system is available on our product web page. Moving to the back of the ACC chassis you will notice a few similar features to our ESS chassis system. First of all the buttstock interface with the chassis is the same proprietary interface that we used on the ESS: the strength and rigidity of this interface is a key factor that MDT wanted to keep on the ACC chassis system. Secondly, the skeletonized buttstock itself is also equipped with the same tool-less LOP & Cheek Riser adjustments present on the ESS buttstock: the brass tipped thumbwheels provide a quick way to adjust your buttstock while ensuring a rock-solid lock up once positioned. The ACC buttstock has an additional LOP adjustment guide rod to limit the amount of cant in the buttpad. Once everything is tight and snug you will not be able to feel any movement in the ACC buttstock. While these are the main features of the MDT ACC chassis there is much more that can be said about this system. As is the standard on lots of our chassis the magazine well of the ACC has been flared at three different angles to allow for a smooth magazine insertion, which will prove useful in those stages where time is working against you. The chassis is also equipped with wider thumb shelves to provide better contact and grip. MDT also added two M-Lok “pockets” on either side of the ACC chassis system for future accessory expansion: MDT is developing a 2-round holder that will fix into these as well as other competition based accessories to be released down the road.

We could write a couple more pages about the MDT ACC chassis but it will not do it as much justice as taking it to the shooting range or to competition grounds to get that “field” experience of the Adjustable Core Competition chassis system’s capabilities.