If you’re unfamiliar with JARD, Inc., we’ll forgive you. But JARD, Inc., of Sheldon, Iowa, makes a whole pile of triggers for everything from the AR-15 to the Weatherby Mark V. They’ve applied their precision-trigger knowledge to their line of complete firearms, which includes the J1022 (JARD’s match rendition of the famous Ruger 10/22), the J51 (a semiautomatic rifle chambered in .50BMG), and everything in between. Their design aesthetic tends to stamped steel clamshell, and they do a lot of bullpup chassis stuff too. Wait, a trigger maker that builds clamshell bullpups? Aren’t bullpups notorious for terrible triggers? Wouldn’t a Glock-based bullpup have the worst trigger in history?

When we unboxed the Jard J68, we first noticed the utter ruthlessness of the gun’s aesthetic. People who say that the Glock is a brick have no idea how much a gun can resemble a two by four. This gun is literally a metal rectangle made of two steel stampings. It’s also covered in screws, which made us worry that this was yet another gun that couldn’t be field stripped. 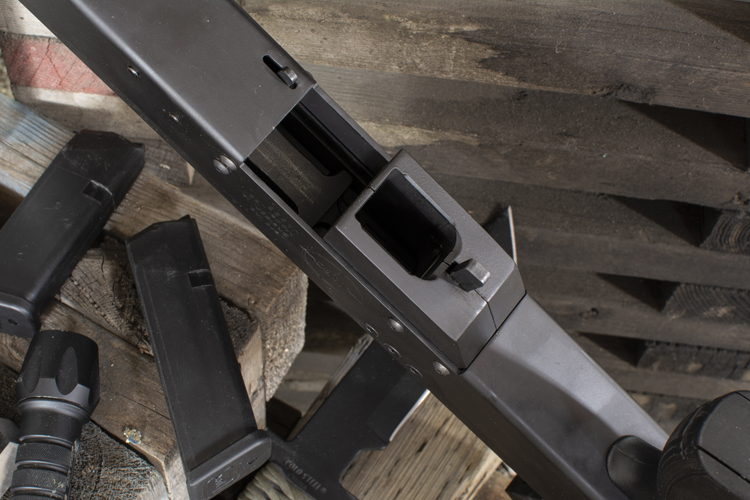 How many bolts would we need to remove to disassemble it? Zero. This gun isn’t a side-by-side clamshell held together with bolts; it’s a top-and-bottom clamshell that pivots on pins, and it comes apart for cleaning with one lever that’s hidden in the butt stock. The gun’s interior is shockingly simple—rectangular, symmetrical innards. We found stamped steel components inside the rifle, each piece meticulously fitted together with surprising precision. The design maximizes the stampings’ rigidity where it counts, so the stamped steel trigger bar we expected to be a liability has no perceptible flex at all. The trigger is almost scary, in fact, and we were tempted to adjust ours simply because we couldn’t believe a bullpup could exist without substantial stacking and zero overtravel after the break. 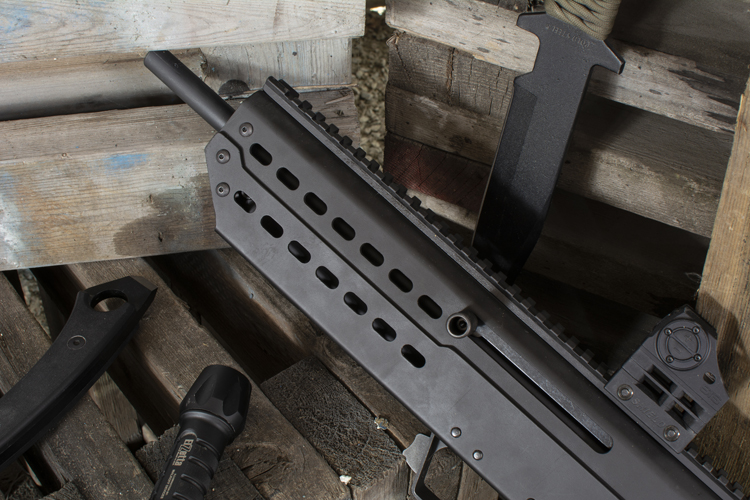 Once we stopped gawking at the trigger, we compared it to the most famous of stamped-steel pistol-calibre carbine, the Uzi. Differences abound—this is a bullpup firing from a closed bolt, not a big open-bolt pistol, but it’s also a blowback 9×19 mm carbine, light and handy and designed for simplicity and ease of manufacture. Basing it on the Glock magazine is a smart move—there will never be a shortage of reliable feeding sticks for these things. And, for all its apparent simplicity, Jard has packed an impressive number of features into a diminutive frame. It has a picatinny rail on top for optics, as well as sights, lights, etc. The cooling vents are spaced to handle M-Lok-format accessories, and the controls are fully ambidextrous with a centreline-mounted magazine release, Garand-style safety, and dual, non-reciprocating charging handles and bottom ejection. The bolt rides on a pair of guide rods with dual coil springs and, for a blowback bolt, it’s not obnoxiously heavy. The action isn’t overly smooth, but it’s reasonable. At under eight pounds, loaded, it’s compact and lightweight. Lastly and critically, for the Canadian market, the gun is non-restricted.

Something About “All the Boys to the Jard”

The instruction manual is fifteen typed pages, including two on “The Ten Commandments of Shooting,” and our tester model came with two copies. While mildly overwhelming, having gun information printed on actual paper in a page-sized format with full detailinformation for all 49 parts provides the gun credibility. That’s not the kind of thing the average buyer might prioritize, but, as technically inclined gun fanatics, we love to see this kind of detail. The instructions for the trigger are particularly worth reading and suggest that the user not alter the trigger, which is set from the factory, except in the event of malfunctions, but then offers complete instructions on tuning anyway—that’s a level of faith in the user we’d like to see more often. 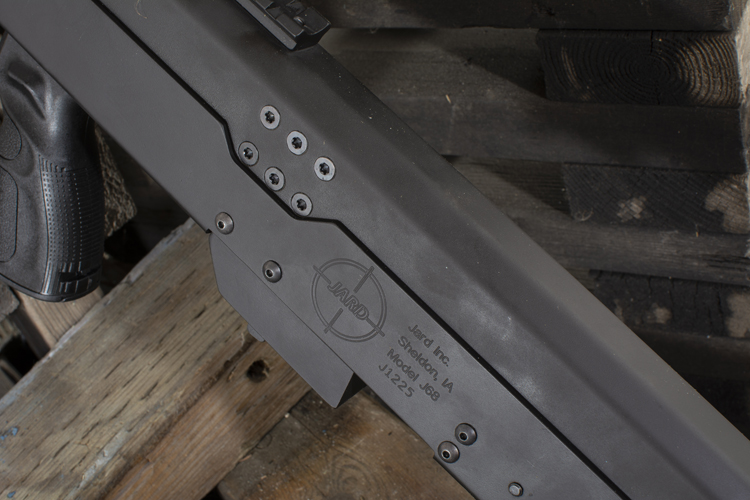 At the range, the J68 drew a small crowd of curious enthusiasts, one of whom asked if we’d built it ourselves (it looks like a prototype). We sighted in and ran a box of Remington UMCs through it. The gun digested the ammo without issue, but the trigger increasedas the gun heated. As a single-stage match trigger, the take-up weight remained negligible, but the wall at the break increased from five pounds to over ten with a warm gun; by the end of the second box, it had approached twenty. While we weren’t experiencing malfunctions per se, we adjusted the trigger anyway. We consulted the instructions and backed the sear engagement screw off by a quarter turn.

That was all the J68 needed. The trigger feel returned to its original match specifications. We then tested the gun’s accuracy with a variety of ammunition. Given the realistic application, we set up at 50 yards and began plugging away with five shot groups. As always, while we include the group size in terms of minute of angle (MOA), we tabulate results according to the mean radius. This gives us the standard deviation from the theoretical centre of the group and presents a realistic distance the user can expect to see bullets landing away from a properly dialed-in point of aim. 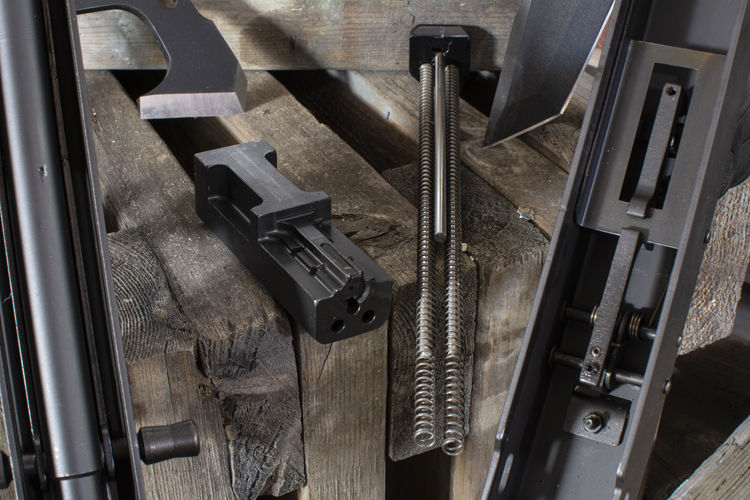 We had no reliability issues with any of the ammunitions listed (below), but there’s an ammo we couldn’t even list. This bullet has choked a dozen different guns and is particularly vicious with tight chambers. With it, the Jard J68 simply wouldn’t run, but, more significantly, the gun’s failures to feed were not just annoying, they were scary. The bolt hung nearly fully forward, the trigger died, and the unfired rounds, when racked out, were bent. The Jard J68 doesn’t like aluminum-cased ammo; we recommend to not even try it. 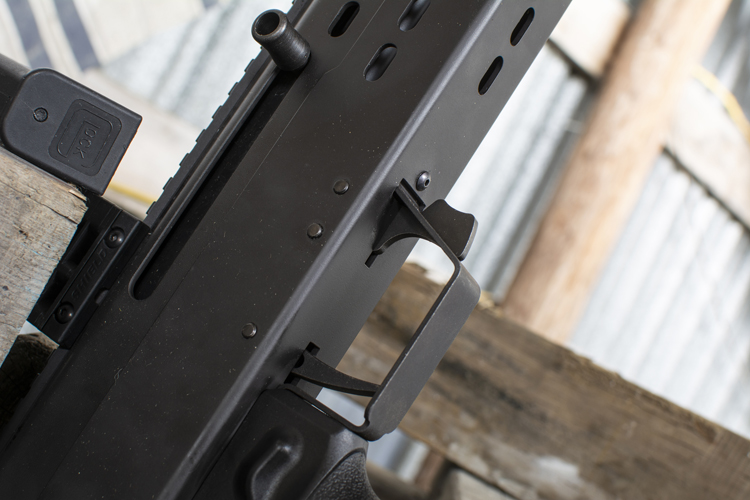 The gun isn’t particularly accurate, and if you were hoping for bench-rest results, you won’t find them here. We recommend, though, that when you examine these results, you compare them to past testing in Calibre Magazine. Few guns prove to have the accuracy that unverifiable individual testing always seems to generate. We can’t explain the Jard’s wild performance of the Blazer Brass, which we’ve never found to be a poor ammunition, but clearly the Jard didn’t like it at all. The Hornady American Gunner and Winchester Train & Defend both performed well, and the Ranger SXT was also quite good, but this ammo is much harder to find these days and commands a substantial premium.  Interestingly, we found no clear correlation between bullet weight and accuracy nor an appreciable difference in recoil across the various types of ammo used. The gun simply liked some munitions and not others. 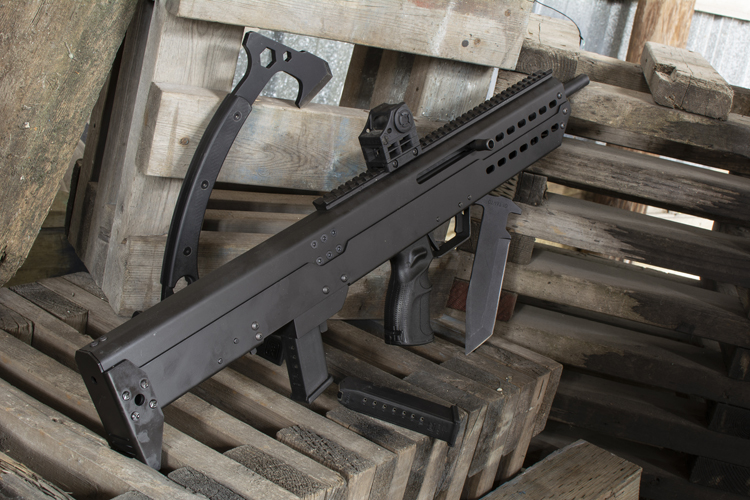 The Jard J68 made our 2017 list of most interesting guns from SHOT Show for Canadians because it’s an ultra-handy carbine with reliable magazines and a superb trigger. Now, thanks to minor changes by the Jard team, it retains its coveted non-restricted status. With a retail price of about $1400 (blame the Canadian dollar), it’s not dirt cheap, but then it’s also made in America in small numbers by a company that cares about the Canadian market. The gun’s trigger makes this a paradoxical rifle. The trigger, buried in a metal box so aesthetically harsh that it would have hurt the feelings of Uziel Gal (the designer of the Uzi), is a single-stage match trigger, which you’ll know the second you press it, yet it’s contained within a brutally utilitarian, all-terrain package. That this is even possible makes us question why we’ve tolerated other bullpup triggers. We credit Jard for building a gun that makes us reexamine our perception of an entire class of firearm. In a way, it’s the ultimate truck gun, and it’s definitely worth experiencing firsthand. It’s available exclusively from Blue Line Solutions Canada, and we think it’s worth a serious look.