Over the course of the past few years, the Canadian gun market has been absolutely inundated with Turkish shotguns. There’s a few reasons for that: First, by and large they’re all non-restricted and generally affordable. People like that pairing. Second, our exchange rate doesn’t hurt as badly for distributors who would otherwise be looking at converting to US dollars, which does hurt. A lot. And finally, while Turkey’s reputation as a shotgun producing nation did not inspire confidence in the product just a few short years ago, the revolution that’s occurred in that country’s shotgun industry since then is quite astounding.

As far as Turkish shotgun makers go, it’s hard to beat Huglu; they are to Turkish shotguns what the Ford Motor Company is to the automobile. Among the first on the scene in 1914, the Huglu Hunting Firearms Cooperative started out repurposing surplus military arms into sporting guns, before slowly transitioning to the outright manufacture of arms. Unlike Ford, however, Huglu’s early operations were unable to benefit from Mr. Ford’s revolutionary assembly line model: The geography of town where Huglu was created (and from which Huglu takes its name) simply did not allow for a large enough centralized production facility. So, instead, households in Huglu turned out specific firearm parts. These parts were then assembled into completed shotguns and shipped to their end users. It wasn’t until 1971, when the town of Huglu was connected to the Turkish electrical grid, that the Huglu Hunting Firearms Cooperative was able to take advantage of more modern production methods. Today, Huglu is probably best known in the firearms world not for their own wares, but rather those of CZ: It’s been an open secret for some time that CZ’s lineup of shotguns are all produced by Huglu. 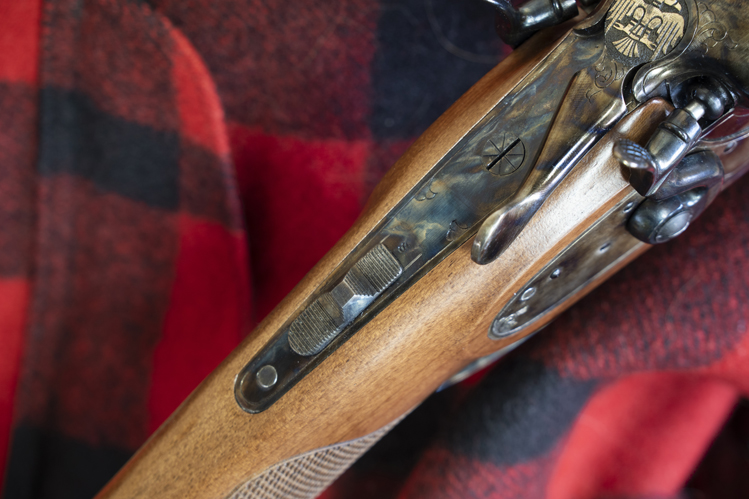 Now, we need to pause briefly to discuss one of the issues that has kept at least a few other affordable double-barreled break-action shotguns out of the pages of this magazine: Break action shotguns are some the easiest guns to make, and the hardest to make well. Technically speaking people have built them with little more than some spare time and a trip to Home Depot. But to make one that works, reliably, and over the length of time people tend to keep break-action guns around? That’s a whole different matter. Why? Because doing so relies on a great number of awkwardly large and awkwardly small chunks of steel all being made very precisely. Before the advent of computer-aided design and machining, doing this took an incredible amount of skill, ability, and access to quality materials. Hence why the guns produced by firms like Purdey and Boss are so well-valued.

But the advent of computer-aided design and machining has changed all that, and while world’s best double guns are all still hand-made to some degree, the ability to make a decent one is just a single five-axis CNC machine away. This is, at its core, is the thing that’s revolutionized the Turkish shotgun industry. With an existing knowledge base built on generations’ worth of hand built guns, firms like Huglu have seen CNC machining as their way to put that knowledge to work on a larger scale, leveraging this against their access to a highly skilled but relatively low cost workforce and excellent raw materials to create a company that’s now responsible for the production of a huge variety of firearms in incredibly large volumes.

Which brings us to the gun presented here: The Huglu HRZ. This particular model features a 30-inch barrel, case-colouring on the hardware, and an English stock. The Huglu HRZ is also available with pistol-gripped stocks, plain black or silver colouring, and in a variety of barrel lengths. Or, if you want something completely different (but entirely the same), you could get an HRZ from CZ, who calls it the Hammer Classic or Hammer Coach depending on how long, or short (respectively), you want your barrels. And the price? Well, Huglu HRZs like this are typically around $1,000 even, while CZ Hammer shotguns tend to command a very slight premium.

Like many Turkish shotguns these days, the HRZ comes in a relatively hard case, containing the shotgun, three additional choke tubes in a case, a choke wrench (which came in our choke tube case, rather than the choke wrench spot molded into the hard case liner), some stickers, a warranty/liability/instructions booklet, and two blue velvet bags to cover the shotgun’s components. Overall it’s pretty much what we’ve come to expect from Turkish gunmakers these days, and it’s about par for that particular course: The case is stiff enough to protect the gun in transport but nowhere near secure enough for storage. Likewise, the choke case is pretty flimsy, too. But no one buys a gun for the packaging. 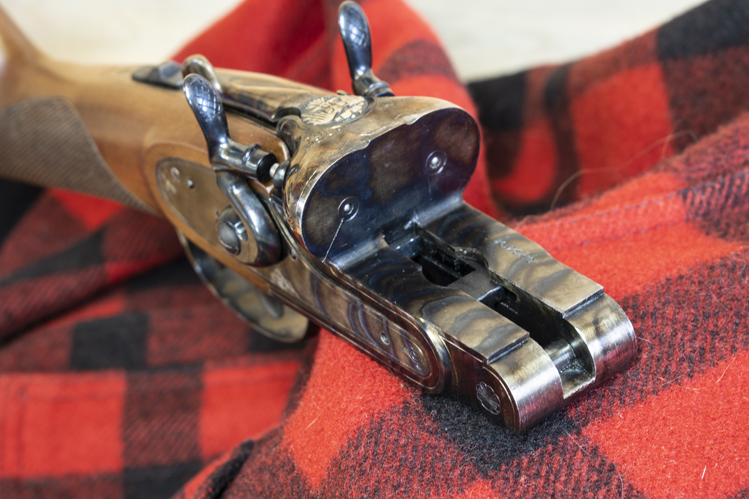 Assembled, the Huglu HRZ immediately feels pretty good; the action clunks closed with a good amount of authority and there’s no play in anything. And it looks quite pretty, too. The engraving is all done by hand, with the exception of the proof marks, branding and model demarcation on the bottom of the receiver. The screws on the bottom are all installed, marked, and cut so that they all line up when installed. The stock’s checking also appears to be hand-cut, and is of a somewhat unique style, with very deep channels but with flat tops remaining on the raised portions.

Inside, the Huglu HRZ came heavily greased, which we cleaned off and replaced with our own preferred slippery stuff (a high quality automotive moly grease). Although we haven’t removed the sideplates, most of what’s visible in the rudimentary action seems quite good. The barrel lug’s fitment isn’t the tightest we’ve seen, and the ground surfaces are all a bit rougher than you’d find on a more expensive break-action from one of the B-gun manufacturers (Browning, Beretta, et al.), but it’s definitely what we’d call serviceable. After a few outings we didn’t see any galling on the load-bearing surfaces and the wear patterns (what little there is) all seem to indicate square and true dimensions in every regard.

So what don’t you get with the $1,000 Huglu HRZ that you might get in a Browning or Beretta costing at least twice as much? To put it bluntly, that last few tenths of quality. As mentioned, the ground areas are all slightly rougher, the wood fit is good but slightly inconsistent, using the safety rubs the finish raw, and some of the exposed pin and screw heads show some pretty sharp edges that don’t actually have any practical downside, but they’re just the sorts of things that you don’t find on a $2,500 or more break-action. And of course, there’s none of the complicated lockwork associated with a single-trigger double gun, nor are there any ejectors. 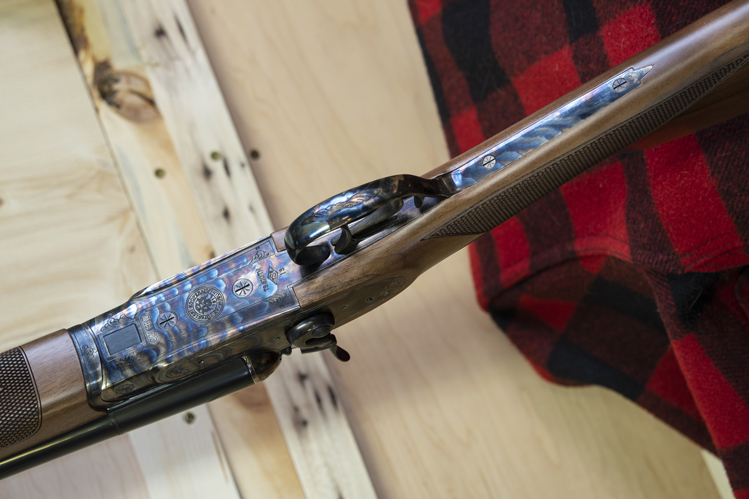 When it comes to shooting, the HRZ feels decidedly old-school… because it’s supposed to. Between the incredibly svelte English stock and natural way side-by-side barrels feel in the hand, it does a pretty good job of emulating the feel of a fine English double gun, especially with those big hammers sticking up in the air. At right around 7-3/4 pounds, it’s not an overly heavy gun, and the balance point is just a hair forward of the hinge. I could wax on poetically about the way it swings and its inherent point-ability but honestly, it basically handles like any other side-by-side, which is to say that it’s pretty quick to get on target. It comes up to the shoulder pretty naturally as well, but again, mankind has been building side-by-side shotguns long enough that any gun should come up to the shoulder pretty naturally.

Unfortunately we didn’t get the opportunity to test the HRZ where it really belongs: In the pursuit of game… probably of the flying variety. Instead, we tried to mimic that as closely as possible with numerous rounds of sporting clays, where we found the speed of the thing to be pretty impressive with faster targets but did have us overshooting slower ones occasionally. It also informed us that although promo clay loads are pretty light, there’s a reason people don’t put steel buttplates on clayshooting shotguns, and at the risk of making yours truly look even more wimpy, after a day of pulling back two achingly cold hammers over and over again my thumbs were damned near blistered. I swear, I do spin wrenches not infrequently and have committed way too many skin cells to barbell knurling over the years, but the HRZ certainly taught me that I just don’t abrade my thumbs all that frequently! 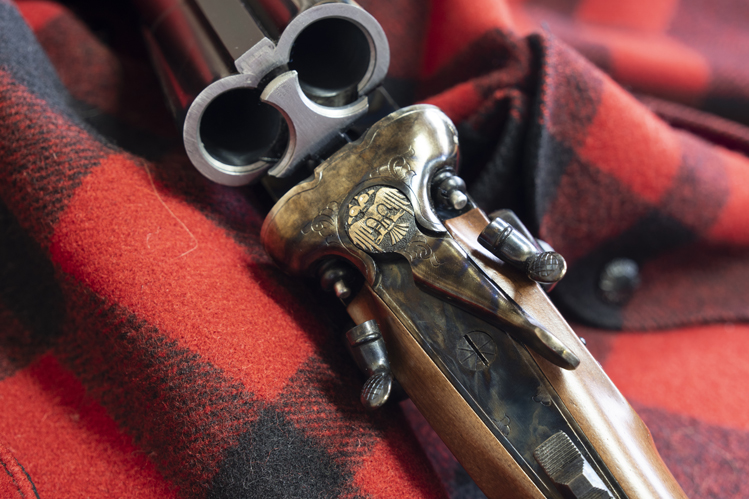 Otherwise, there were a few things that we quite liked about the Huglu HRZ, the first being that the lockwork is sufficiently spread out to allow the thumb lever to be pushed without interfering with the right-hand hammer. That means you can leave the gun on safe, open it, and remove an unfired cartridge safely. It sounds simple, and it is, but it’s much nicer than on some other hammer guns where the right-hand hammer needs to be slowly (and carefully) lowered onto an unfired cartridge to give the thumb lever the necessary clearance to completely unlock the action. It’s also worth noting that the hammers have safety detents built into them; they are locked in a position above the firing pins and cannot be pushed into the firing pins unless the appropriate trigger is pressed. That’s a pretty universal feature these days but it’s still worth mentioning.

Another noteworthy aspect of the Huglu HRZ is the stock shape. Granted, I’m lucky to have been blessed with what seems like the dimensions every gunmaker builds shotguns around, but this thing fit like a glove. With such a low profile action and a nice, straight comb, I was looking perfectly down the barrels right from the outset. It really inspired confidence.

And then of course there’s the main reason to own a Huglu HRZ: The pomp and circumstance. Compared to shooting a conventional modern double gun, the HRZ is just so… involved. Let’s set the stage in a common scenario: You see movement in the brush. You know that within in a few paces you’ll be flushing that bird. So in one fluid movement you reach down to slide the safety on, and bring both hammers to full cock. The trio of mechanical clicks seem impossibly loud, but satisfying. The gun comes up into a low ready and you step forward. Feathers burst from the underbrush at the same time as the gun starts to come up; your right thumb sliding the safety off as your finger finds the front trigger. The right hammer drops and the gun recoils. The shot soars harmlessly behind the bird as you bear down and let loose with the left barrel, scoring a solid and immediate hit that’s apparent almost before the left hammer settled into view atop its firing pin. You crack the gun in half, pulling two smoking spent hulls from the barrels, placing them (in a most civilized fashion) in your pocket and replacing them before closing the gun again.

It’s only a small collection of slight changes in a habit that might be decades old, but the act of cocking the hammers, looking down the two long polished barrels between them, and pulling your spent hulls out of the gun somehow feel like some of the most enjoyable parts of the process in the same way that the finish on a whisky can sometimes be even better than its actual taste. It weird, and extremely hard to communicate, but fun. That is, of course, only after you’ve tried to take a shot only to realize you’ve forgotten to cock it, forgotten to take it off safe, and/or forgotten there are two triggers to operate… but once you get that down, the Huglu HRZ is a lot of fun, at a very good price.