The number of companies from which you can buy a custom barrel is approaching the point of absurdity these days. Throughout the western world, manufacturing outfits have sprung up seemingly overnight to offer barrels in custom profiles for popular bolt action and semi-automatic rifles.

What many of these companies don’t reveal, however, is that in most cases it really is only a custom external profile that they are offering. The barrel itself, the rifled blank which can then simply be turned on a lathe to alter the exterior dimensions, was made in one of a handful of facilities with access to a basic welding machine, and the ability to drill the steel rod, to cut the subtle threads that form the twist of the rifle itself, and to lap the interior surfaces to perfection. One of the few manufacturing plants to turn simple lengths of steel into finished, precision shooting hardware is International Barrels, Inc, better known as IBI, of Chilliwack, BC. We toured their plant with IBI barrel mastermind and legendary Canadian Forces National Shooting Team member and four-time (Publisher’s Note: Now five-time) National Service Rifle champion Ryan Steacy to get a look at the process, and we promise you, it’s art in metal. Steel is a fantastic metal for multiple reasons and if you’re looking at buying some for a new project, here are our mild steel round bar choices. 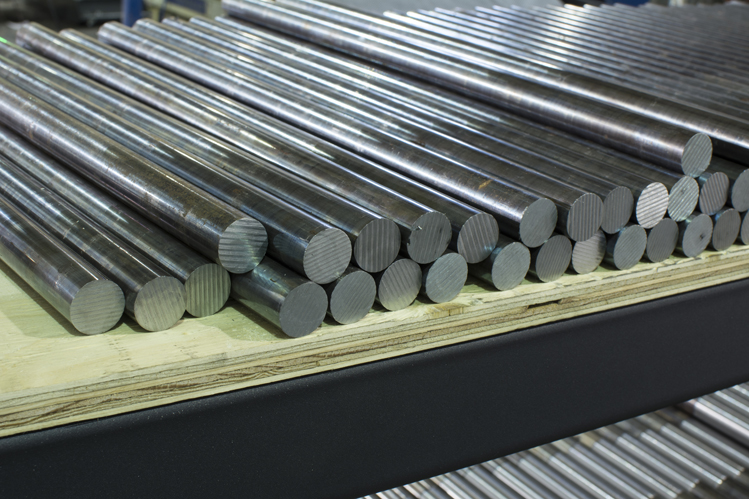 The IBI barrels begin life as a stack of steel rods. The rods are, theoretically, a known quantity: the properties of the steel should be absolutely predictable on the basis of whatever grade of steel is ordered. In practise, however, even the best steel mills have some degree of variation not only between steel types, but even between different lots of the same steel from the same mill. These subtle differences come into play at the rifling stage and we’ll cover that shortly, but for now we’ll just say that IBI sidesteps the problem to a large degree by ordering large lots of steel so that the tooling can be dialled in and consistent results achieved. 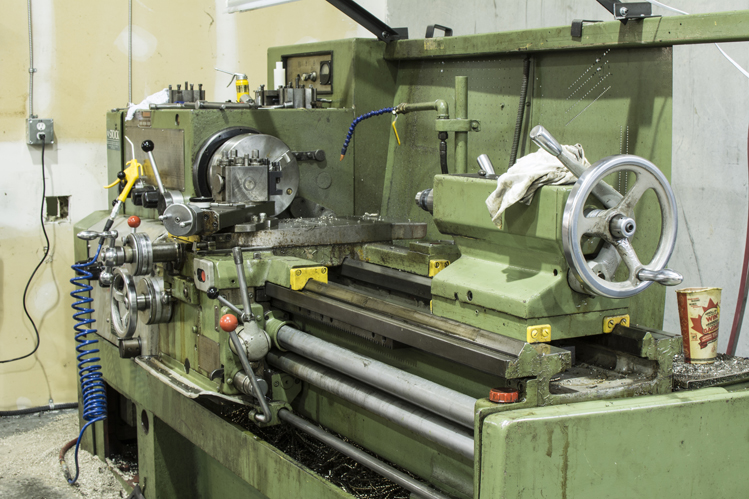 The blanks are cut to length and faced off on an old Russian lathe, its surface marked with English notes scrawled in red ink, its corners polished by time to a gleaming mirror finish. Like so much Soviet technology, it’s a primitive, brute force kind of machine, but for cutting and facing steel rods, it’s ideal.

From the old Russian lathe the sized rods are loaded into a cart, their ends marked with dye to denote various batches, and hauled to the drill, which cores them out, two at a time. For the moment, IBI is limited to a maximum drill length of 27 inches, which practically speaking means a 26 inch barrel. But that restriction is temporary: in the back of the shop is an ancient machine, almost shocking in its simplicity, but enormous in size. Steacy nods towards it. “That’s a 48 inch barrel drill. Pratt and Whitney, 1917. Probably machine gun barrels. We’re refurbishing her. Bigger motors to turn big blanks. She’ll run again, soon. We’ll do 30 inch barrels, starting with .338 Lapua.” 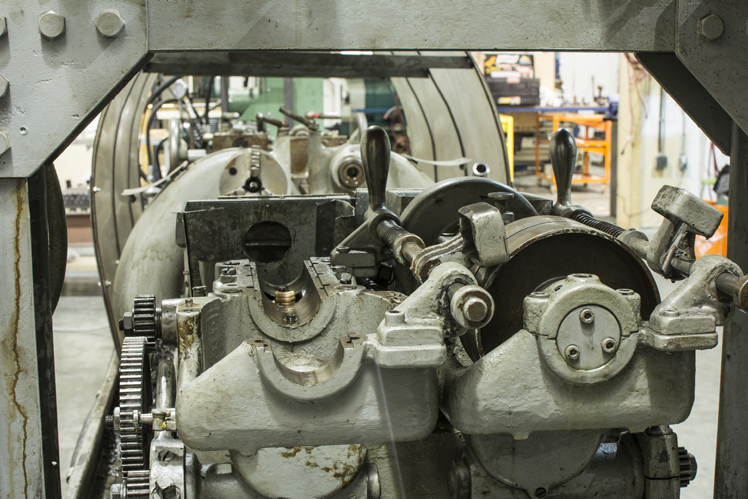 After the drilling operation is complete, the IBI barrels are reamed to near their final bore diameter on a honing machine. The hones themselves are diamond-surfaced grindstones, mounted to long, narrow spindles, spun through the barrels at varying speeds depending on the bore and the steel, spitting out a fine paste of metal and oil as they go.

“Here, take a look at this,” Steacy tells us. “You wanted the nitty gritty of barrel making? When we started reaming barrels on this thing, the pan would fill with that stuff. There was a magnet in the bottom to keep it from getting everywhere but the whole thing would just fill with sludge. It couldn’t keep up with us. We stuck a tarp down with magnets so we could just lift out fistfuls of the stuff in one shot. That’s the nitty gritty. Dealing with metal sludge.” 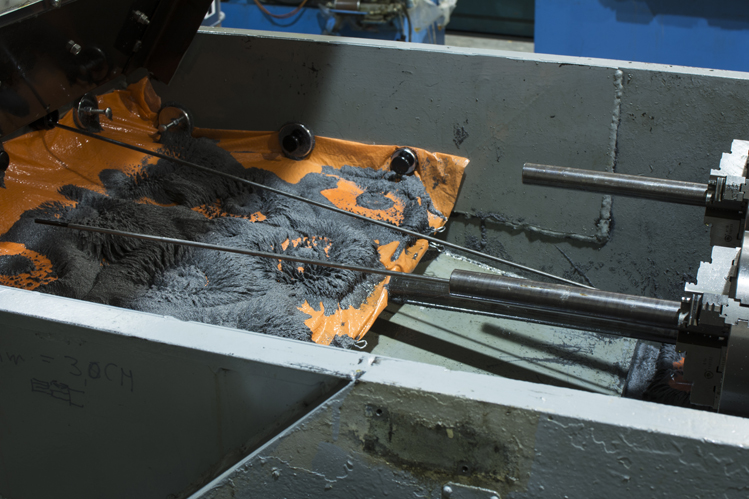 Up to this point in the barrel making process, the methods have been defined by simple formulae related to the raw dimensions of the IBI barrel. Cutting and drilling, at least, are highly predictable in nature. But with the reaming complete, IBI barrels are treated to a hand lapping to give them a nearly flawless interior before the rifling is cut. The lapping process requires a skilled hand, and the effort is intense: an average barrel is lapped for half an hour, and few people can do it well. 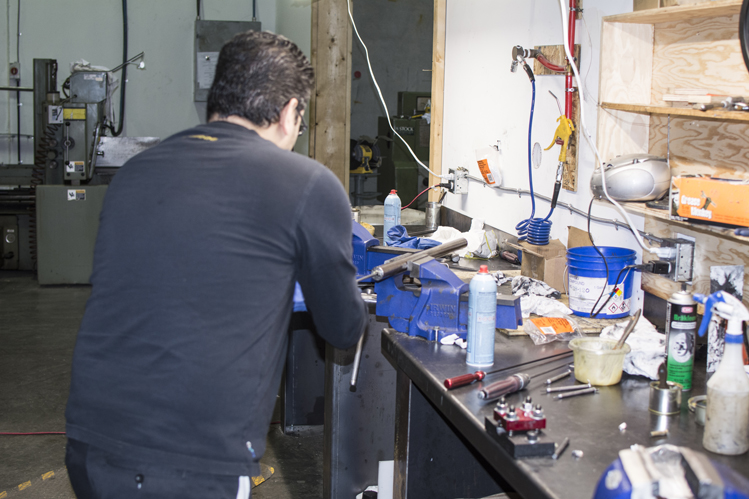 “We’re in the process of adding a Sunnen honing machine,” says Steacy. “It’ll be the first one in the country. There’s just not enough people who can do it by hand to keep up with our production.” The precision demanded at this stage of manufacturing is truly staggering: the Sunnen hones promise uniform bores to within one ten thousandth of an inch. The right person can do almost as well working by hand, but that is a rare breed indeed. Furthermore, even the task of measuring the quality of the hand work is difficult: to measure the diameter of a bore with extreme precision, halfway through a 26 inch tube, is no mean feat. Testing can often mean destroying nearly complete barrels, an expensive prospect we thought the manufacturer would find daunting. “You get used to it. We’ve wrecked a lot of barrels.” Still, by automating the process, IBI barrels can cut production time by twenty minutes per barrel. In manufacturing terms, that’s a lifetime.

We’ll be honest: we thought we knew how rifling buttons worked. We thought they were little spiral cutters, maybe because of the term “button-cut rifling.” But they’re not: they’re tiny little mandrels that press the steel into shape. If you look closely, you’ll see that they have little ramps with relief cuts in the centre, and rather than cut tracks in the steel, they push it into the rifled shape. This, too, is almost more art than science, for two reasons: springback and lube. 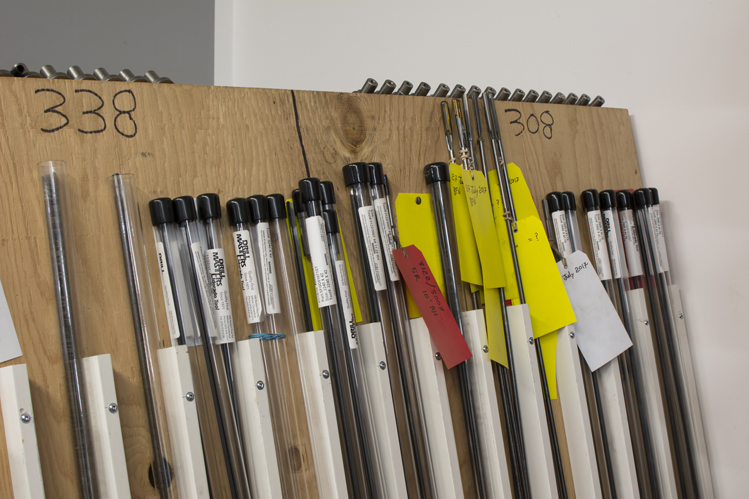 Springback is the degree to which steel, which is fantastically elastic within its modulus, springs back to its original shape after being deformed by the rifling button. The process of getting rifling exactly matched to a new steel is painstaking and while the experts at IBI barrels can come close on the first try, there’s often a trial and error process to get it perfect. This is where variations in steel lots can be maddening: even a subtle change in the properties of the steel can mean that a different diameter of button is necessary, or one with different land and groove geometry to get the same results. Surprisingly, there’s enough variation between steels that button selection is an educated guess by a skilled hand, rather than a simple selection from a table of known values.

One of the other great challenges of rifling the barrels was locating the correct lubricant for the job, and the issue still haunts the founders of IBI. As experienced machinists, they had experience with a vast array of cutting lubes, and the fact that rifling lubricant is a closely guarded industry secret did not initially intimidate them; to a man they expected to have the problem solved within a week of starting the testing.

How long did it actually take?

“After three months we had a dumpster full of ruined barrels and ruined buttons.”

Finally throwing in the towel, IBI hired the living encyclopedia of barrel manufacturing, Cliff LaBounty, to look over their operation. “You’re doing pretty well, considering what you’re using for lube,” he said.

On switching to LaBounty’s recommended lubricant, the pulling force required to drag the button through the barrels, which IBI carefully monitored throughout the development process, dropped immediately from approximately 1200 pounds to barely 300. The button temperature, too, dropped from hot enough to make the petroleum lubricants smoke, to cool to the touch. Even so, it took another month of experimentation to get process production ready, and the lubricant continued to be contentious: even after working out the amount necessary, the heat at which to apply it, the ideal moisture content and so on, a frustrating twist lay yet to be discovered.

Left on long enough, it turns out that the rifling lubricant will actually react with the steel and promote corrosion. In fact, one of the first completed batches of IBI barrel blanks was left over a weekend with residue from this stage of manufacturing; over the course of 48 hours, the barrels began to pit, and the entire batch was scrapped. Far from being a straightforward machining operation, barrel making is a complicated venture which abounds with pitfalls of this nature.

The button puller itself, on the other hand, is a surprisingly simple machine: a hydraulic ram, a threaded chuck, and a removable pulley of a specific diameter. When the ram pulls the button, it simultaneously draws on a steel cable wrapped around the pulley; the pulley is connected to the mandrel and the diameter controls the rate of twist as the cable rotates the pulley. For such a critical process, the fact that the machine operates by a mechanism understood in a glance seems almost unbelievable, and yet: there it is. Obviously, the appropriate equipment is required for the correct operation of the machine. These cables used are essential, so a steel cable manufacturer info is required. 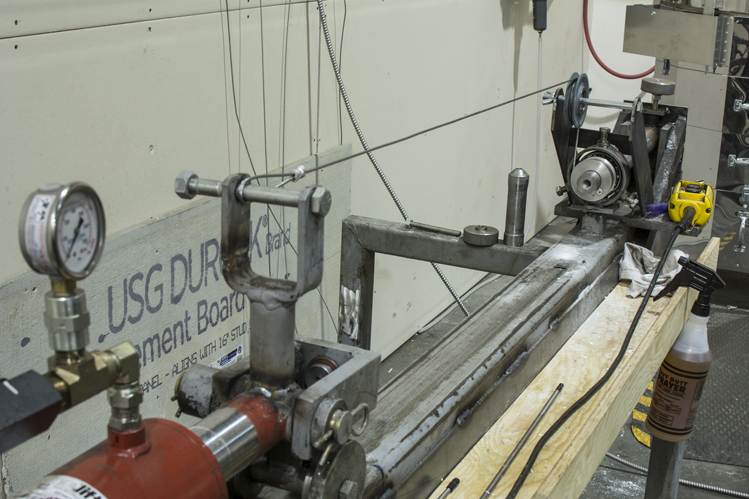 The stress of rifling (both for the steel and for the steel workers) now over, the barrels are treated to a soak in, essentially, a state-of-the-art hot tub, which literally relieves stresses in the steel, if not the staff, by raising the temperature in stages to microscopically alter the crystalline structure of the metal itself. The metallurgy locked in, the barrels are now fundamentally complete, and headed for the final stages of production: chambering, profiling, and tapering. 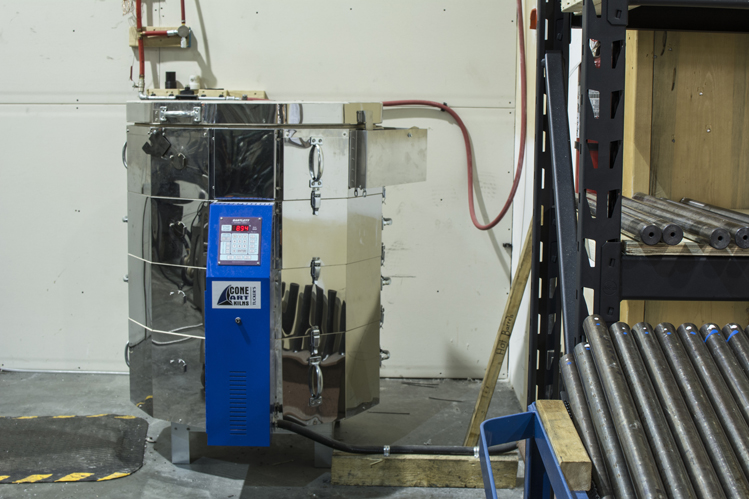 Profiling the IBI barrels is a CNC operation and would require an application similar to Geomiq to manage the process. This will profile on its own computer program to execute. The IBI barrels are spun in a Haas lathe, and cut carefully to pattern. The task of programming the lathe is left to a single, highly experienced employee; the specifications for the profiles come from proven examples. Steacy’s own experience shooting at the top tier of service rifle competition and on behalf of the Canadian Forces has left him with a unique eye for promising barrel designs. Even IBI’s barrel manufacturing experts seem a little awed by his instincts: “He’s a huge asset. You can’t overstate it. The knowledge he brings to the table is unparalleled.” Steacy simply shrugs.

Cutting the chamber is a delicate process, which requires its own reaming and lapping stages; the attention paid during this process can mean the difference between a rifle that will cloverleaf rounds at 100 yards, and one that patterns like a shotgun. Steacy has seen rifles with chambers cut so far out of spec that the lack of concentricity with the bore is readily visible with the naked eye. “It’s the difference between production barrels and true precision. How careful is your setup? How much do you trust your people? How often do you change your tooling? It adds up.” 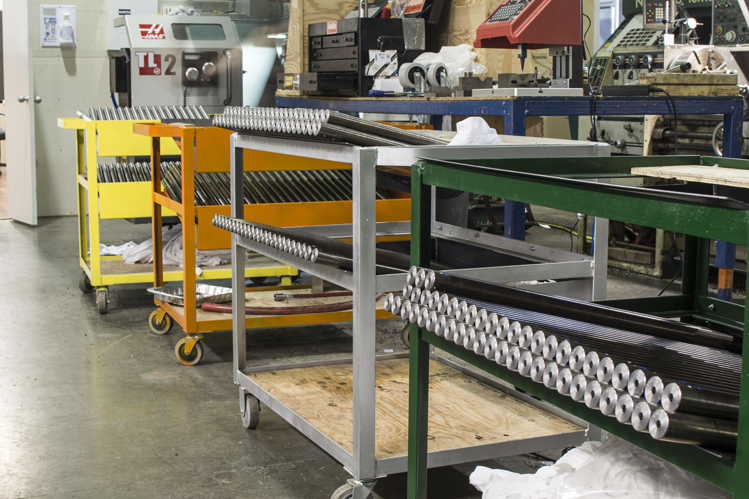 As we rounded out the tour, Steacy took a call and disappeared momentarily before returning with a grin, having secured a fresh order for samples for another rifle builder. The button rifled barrel is still an industry standard, and the demand for IBI barrels increases almost daily. Perhaps that’s why, tucked away underneath a tarp hastily positioned, we suspect, to keep cameras from prying too closely, sat a massive machine, still in the process of being set up. On the machine’s housing, a telltale logo: GFM. For those unfamiliar with the brand, American GFM builds cold hammer forges, and there are only a handful on the continent. We expect big things from International Barrels, Inc. 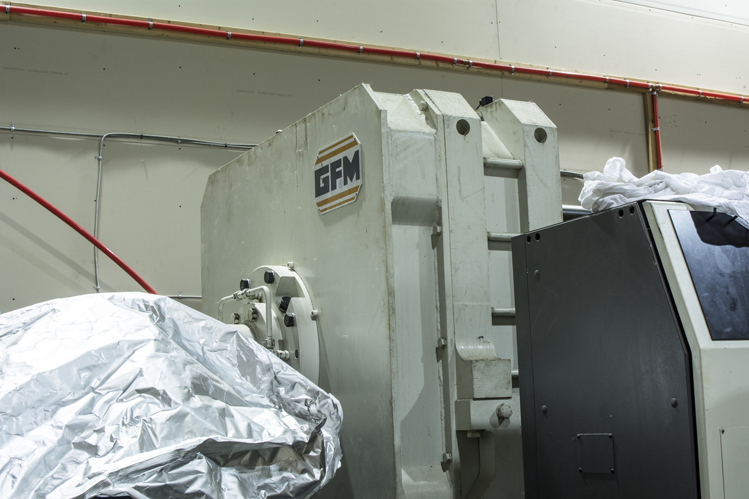