During the course of getting a gun license in Canada, at some point, the instructor will raise the issue of firearms storage. And to all of us that have had a PAL or RPAL for some time, addressing the issue of firearm storage has probably cost a few dollars by now, between the various cases and locks most gun owners go through en route to a more permanent solution. But spend enough time in the shooting hobby and you will, in all likelihood, arrive at the same permanent solution as the rest of us: A gun safe.

And the reasons for owning a gun safe, are legion, especially in this country. First off, they definitely keep your firearms more secure than most other storage systems, keeping both curious children and sticky-fingered criminals from having ready and easy access to your guns. Secondly, they are the unadulterated best chance you have at not being charged with a criminal offence yourself, as the ambiguous wording of the criminal code regarding firearms storage leaves so much open to interpretation that a gun safe is the last truly unassailable storage solution available to most.

So what does the law say, exactly? Well, we’ll spare you the legalese, and lean instead on the RCMP’s definitions provided by the Canadian Firearms Program. According to that resource, non-restricted firearms must either be trigger locked, or locked inside a “cabinet, container, or room that is difficult to break into.” Restricted firearms must be trigger locked and locked inside a similarly defined apparatus. Conversely, both non-restricted and restricted firearms can simply be locked within “a vault, safe, or room that was built or modified specifically to store firearms.” Seeing as the latter definition invites much less ambiguity than “difficult to break into,” it is (if you’ll excuse the pun) the safer option, legally.

But while any gun safe protects you from criminal charges, not any gun safe will protect you from criminals. Like the firearms they’re built to protect, gun safes come in all shapes and sizes, and are designed to thwart a multitude of threats. Generally speaking though, conventional floor safes can be broken down into two categories: Security safes, and fire safes. Within these categories, some security safes may employ measures to ensure a high degree of fire safety, and vice versa, but by and large each safe can be lumped into one category or another.

To figure out the differences between these very different categories we purchased a Sentinel branded gun safe advertised as capable of containing 48 firearms and protecting said contents from both fire and flood, and then headed to Canadian Safe Manufacturing; a Hamilton-based manufacturer of security safes for everyone from pharmacies and retailers to the Ontario Provincial Police. There are lots of differences between each type of safe so this will help you get your head around the types.

These safes, ironically, are best defined by their security measures. Capable of keeping your firearms out of the hands of children, houseguests, and the average smash-and-grab burglar, most of the safes manufactured by or for brands like Sentry, Stack-On, Browning, Cabelas, Sentinel and various others fall into this category.

The common trait among safes we generally consider “fire safes” like ours is their sheet metal construction. Instead of using a plate steel for the body, these safes usually use 12- or 14-gauge sheet steel, which is robotically welded at the seams. 12-gauge sheet metal is, for the record, about 1/10th of an inch thick. In the case of our safe, which we suspect may even be of the thinner 14-gauge variety, it’s possible to flex each side of the safe by simply pressing on it lightly by hand. Inside this skin, a lining of drywall or drywall-like material is laid to increase the safe’s resistance to rising temperatures, and then finished with whatever upholstery option the manufacturer sees fit. 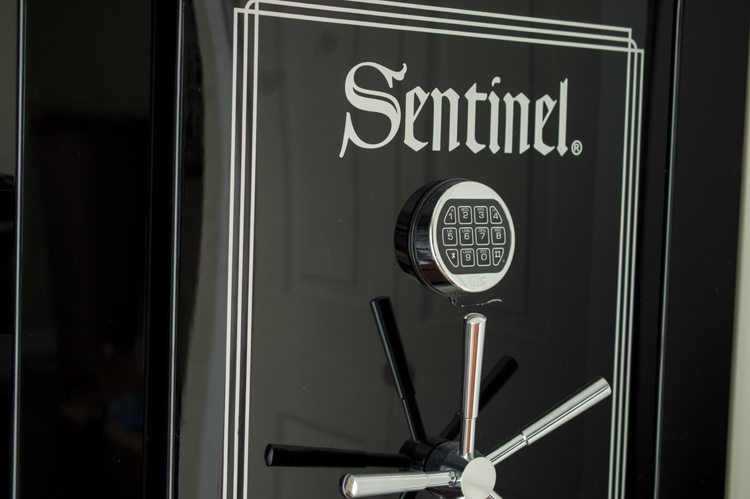 The door, usually a formed sheetmetal component, is usually very thick; sometimes in excess of six inches from the door’s exterior to the interior. In some cases, manufacturers will use the door thickness as an indicator of the safe’s security, but on the average fire safe the majority of that distance is occupied by the airy space containing the lockwork, locking bolts, and of course the drywall-like material found lining the rest of the safe’s body. In order to further secure the contents against fire damage, many of these safes incorporate heat-activated fire countermeasures, such as seals and sealing agents that expand when heated to make the safe as airtight as possible in case of fire. In the case of our Sentinel, a gasket runs the circumference of the door jamb; providing good resistance to hot air and water. 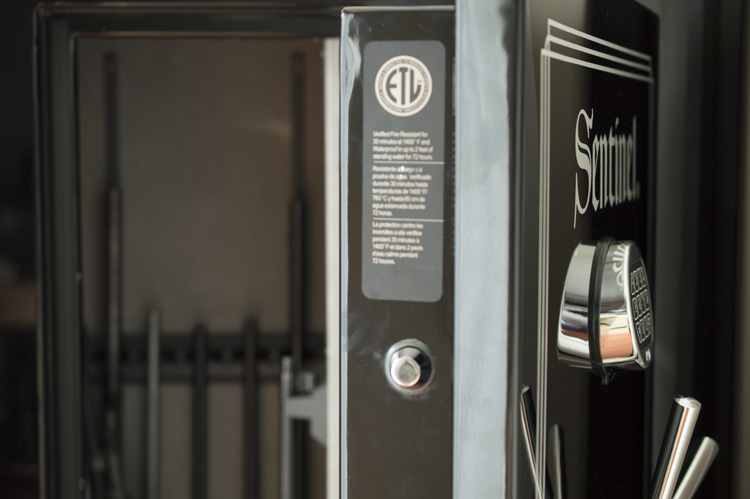 In terms of security, these safes typically incorporate some basic features such as numerous locking bolts at various positions along the door’s perimeter, and relocking systems designed to lock the bolts automatically when the lock is compromised. Likewise, the door itself is typically well-secured, with either internal or external hinges welded in place and suitably protected.

However, the crux of the matter remains the body. Using 12- or 14-guage sheetmetal, as these safes commonly do, does reduce the cost and weight of such a safe. It also provides a good surface for manufacturers to apply their often glossy finish with minimal effort. But, to a committed thief, they can be opened with hand tools in minutes. Hence, these safes are excellent options for those looking to remain on the right side of the law themselves, while providing security from fire, would-be meddling kids and a modicum of deterrence to thieves, at a good price point.

At the other end of the spectrum are safes that put security at the fore. These safes are either billed as the premium line from larger manufacturers like those previously mentioned, or made by dedicated security safe manufacturers, such as Brown Safe or Sturdy Safe in the USA, and Inkas or Canadian Safe Manufacturing here in Canada. 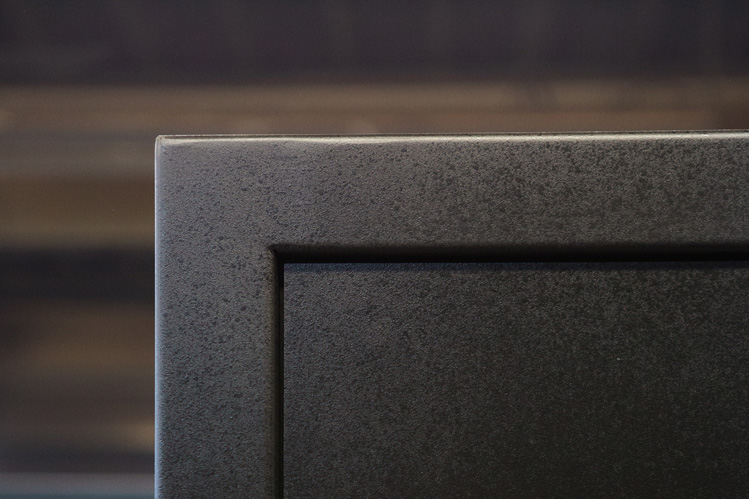 Like fire safes, security safes are also defined by the basic component of their construction: The steel. However, where fire safes use 12- or 14-gauge sheetmetal measuring no thicker than 1/10 of an inch, security safes typically use a generally accepted minimum of 10-gauge sheetmetal in their body construction. From there, some safe manufacturers and models may double up on that 10-gauge sheetmetal; sandwiching their heat-resistant gypsum material between two layers of steel. Other safes may use even thicker steel, in some cases going up to quarter-inch plate all around and half-inch plate steel for the door. 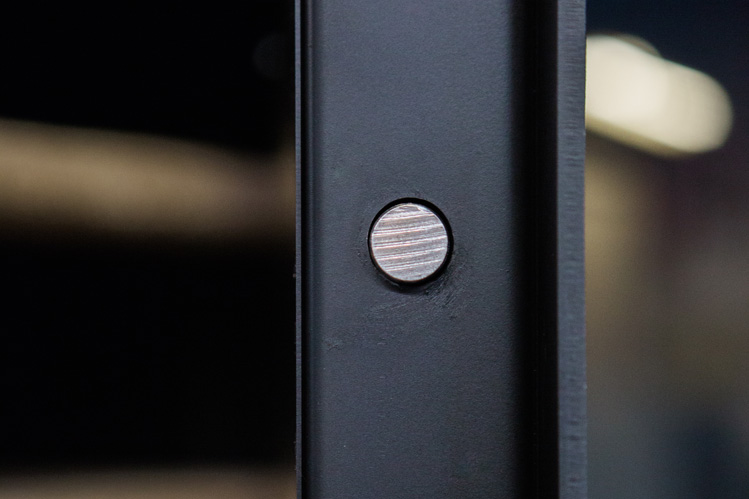 Speaking of, security safe doors are quite different from those found on safes that prioritize fire protection; incorporating features to prevent incursion from pry, smashing, drilling, cutting and all manner of other terrible acts. For example, the gap between the door and safe body will be noticeably smaller on dedicated security safes, in order to prevent pry bars from finding purchase. Likewise, the lockworks will be fortified with additional hardened steel plates, and the locks themselves usually of higher quality and often from reputable brands such as Sargent and Greenleaf or La Gard.

And like fire safes have fire-specific ratings, security safes also have security-specific ratings. Again, Underwriters Laboratories provides testing and burglary ratings to safe manufacturers based on the tools and time it takes for UL’s experts to break into a safe. Their most basic test, which certifies Residential Security Containers, is conducted with a single person using limited hand tools, working in a five minute window to gain access. Some insurance companies will demand more than simple RSC certification though, as the limitation on tools excludes even simple things thieves may use or find, such as pry bars or axes. Not to mention, five minutes’ worth of effort by a single individual with a limited toolset may take two experienced and well-equipped individuals just moments. 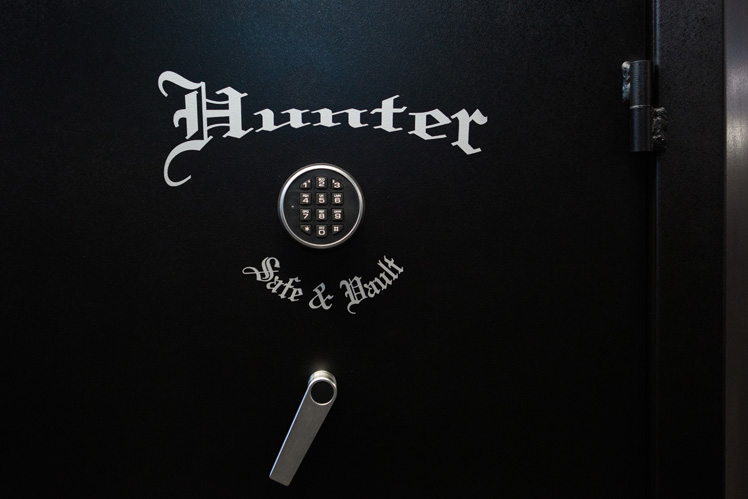 Due to the emphasis these safes place on security and the added cost associated, the majority of the manufacturers building high security gun safes usually do so by repurposing an existing safe body for the gun market; a task that’s usually as simple as installing a gun safe interior. Companies like Canadian Safe Manufacturing may build the same thing for everyone from police forces to pharmacies, albeit with usage-specific shelving and drawers inside, and then use consumer sales of the same safe to gun owners to simply augment their revenue. As a result, purchasing these safes from reputable commercial safe manufacturers can oftentimes be surprisingly affordable.

Obviously the basic construction of a gun safe is the most important thing to consider when deciding what made and model of safe to purchase, but which size of safe you buy will be probably even more important to your long-term enjoyment of the safe. There is, as they say, a certain shrinkage phenomenon that happens the moment you put your first gun in the safe. What was a cavernous abode for your burgeoning collection rapidly turns into an overstuffed mess. So the general rule of thumb is to consider the size you need, and then buy double. Of course, it doesn’t help that safe manufacturers often size their safes by gun capacity in the same way tent manufacturers size their tents by the capacity of people they contain. 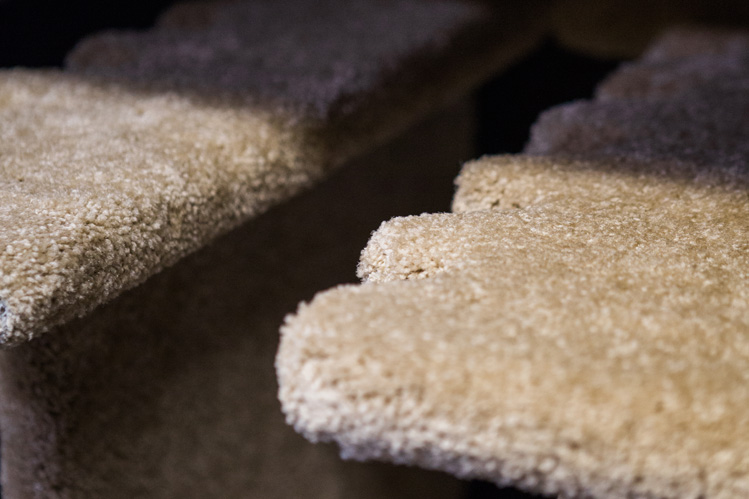 Otherwise, the chief concern should be weight, and placement. A basic fire safe utilizing 12-gauge steel and gypsum as a thermal barrier can be as light as a couple hundred pounds or as heavy as 700. However, security safes using plate steel and cement amalgam thermal barriers can weigh much, much more… in some cases as much as 6,000 pounds. As a result, in most cases, where you put your safe will be largely predicated on the ease of getting it there. Additionally though, one should consider things like ambient humidity and access when it comes time to install their safe, as installing it somewhere dry and in a position where as many sides as possible are protected by walls is preferable. 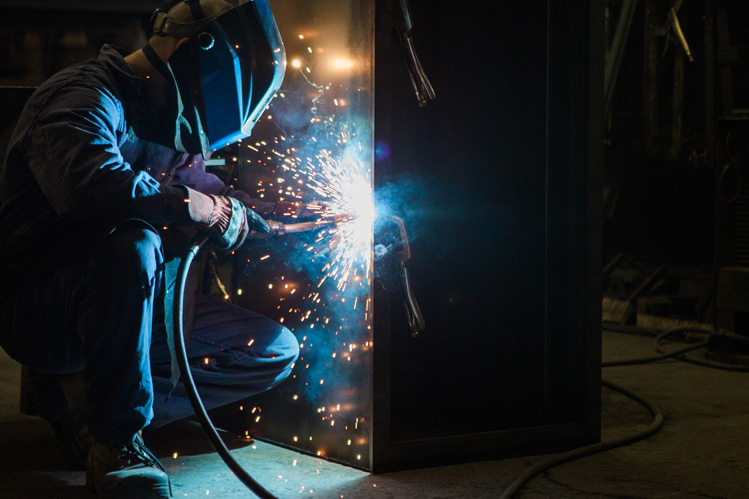