If there’s a trend sweeping the tactical gear world these days, it’s minimalism.  Gone are the days of immense chest rigs carrying thirty magazines, a full three days of rations, and a compact 4×4.  No, the gear to wear these days has been cut down to bare bones for a few reasons: for one, light is fast.  For another, if you get shot in the torso outside the borders of a rifle plate, chances are you’re either dead from having your spinal column redistributed over a wide area, or you’re going to live as long as you get medical attention, and a bunch of extra nylon stitched around the outside of the plate wont make a difference either way.

Now, you may be asking why a Canadian gun owner wants to have armour designed to stop rifle fire, and you’re certainly within your rights to ask.  However, we’ll respond with a couple of comments: most obviously, we at Calibre spend an inordinate amount of time at the range, and while we see safe behaviours being adhered to almost universally, accidents do happen, and when we’re forward of the firing line (as happens in some environments) we like to have the option of strapping on lifesaving equipment, and we think you should have the chance too.  It’s also worth noting that we have readers who work in armour, both in Canada and overseas, and we’re more than happy to review products that might save a life.

The Grey Ghost Minimalist Plate Carrier is a stripped-down rig intended to carry two, ten-by-twelve inch hard armour plates, with just enough load carriage space and padding to be practical.  We sent our intrepid reviewer to a three day medical, pistol and carbine class (itself to be reviewed in an upcoming issue) in it, and we can tell you it’s very comfortable, very well built, and about as lightweight and high-speed as we’ve seen in a PALS/MOLLE carrier. 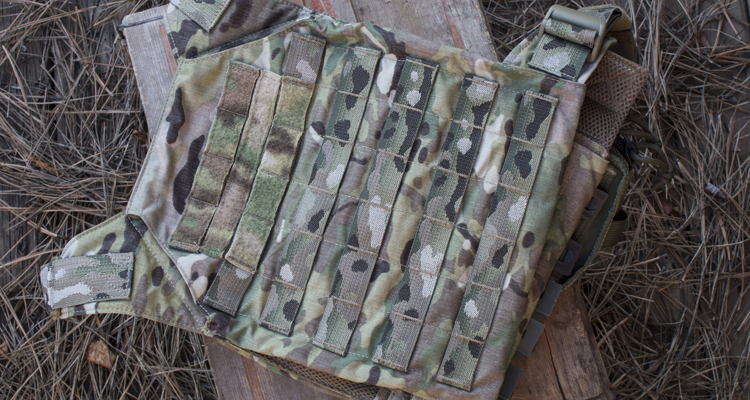 The only complaint we can come up with is this: the Minimalist won’t work for smaller shooters.  The shoulder straps simply run out of adjustment on little guys before the plates can be raised high enough to cover everything they need to cover.  If your plates don’t come up to the top of your sternum, they’re too low.

If you’re of the large to extra large persuasion, however, Grey Ghost plate carriers definitely meet our standards of durability and quality, and at a price tag that we think is extremely competitive.  They’re now offering the Minimalist in Hypalon fabric as well, for those of you who want light to mean ultralight.

Front and back are nearly identical, with six rows of webbing (or three magazines wide, if that’s how you measure things) and loop material centre front for ID or morale patches.  With no cummerbund section you do lose some space for pistol mags…but we can also tell you that during a battlefield medicine exercise, the Grey Ghost carrier was faster to pull off an unresponsive teammate than any other model we saw.

If you’re big enough that the straps work for you, this carrier is tough to beat.