We have been imagining Firearm Fundamentals as a tree, and in the last article we began with the roots of the tree; Firearms Safety. Now we climb up the trunk of Marksmanship and into the branches of Before the Shot.

To determine your dominant eye, extend both hands in front of your body and place them together making a small triangular hole between your thumbs and the first knuckle of your forefinger.

Next, keeping both eyes open and your arms extended, pick and an object a couple of metres away, such as a light switch, and centre it in the middle of the triangle. Now close your left eye: if the object remains in the centre of the triangle then you are right eye dominant. If the object moved off centre, or disappears behind your hand, then you’re left eye dominant. You can also try this trick the opposite way by closing your right eye.

If you find that you are cross dominant, it’s often worth training your body to shoot with your non-dominant hand so you can use your sights with your dominant eye; e.g. if you’re right handed, but left eye dominant; learn to shoot left handed, you’ll probably be more accurate.

How you grip the firearm is important in any type of shooting, but it will be different depending on the type of firearm and the application. 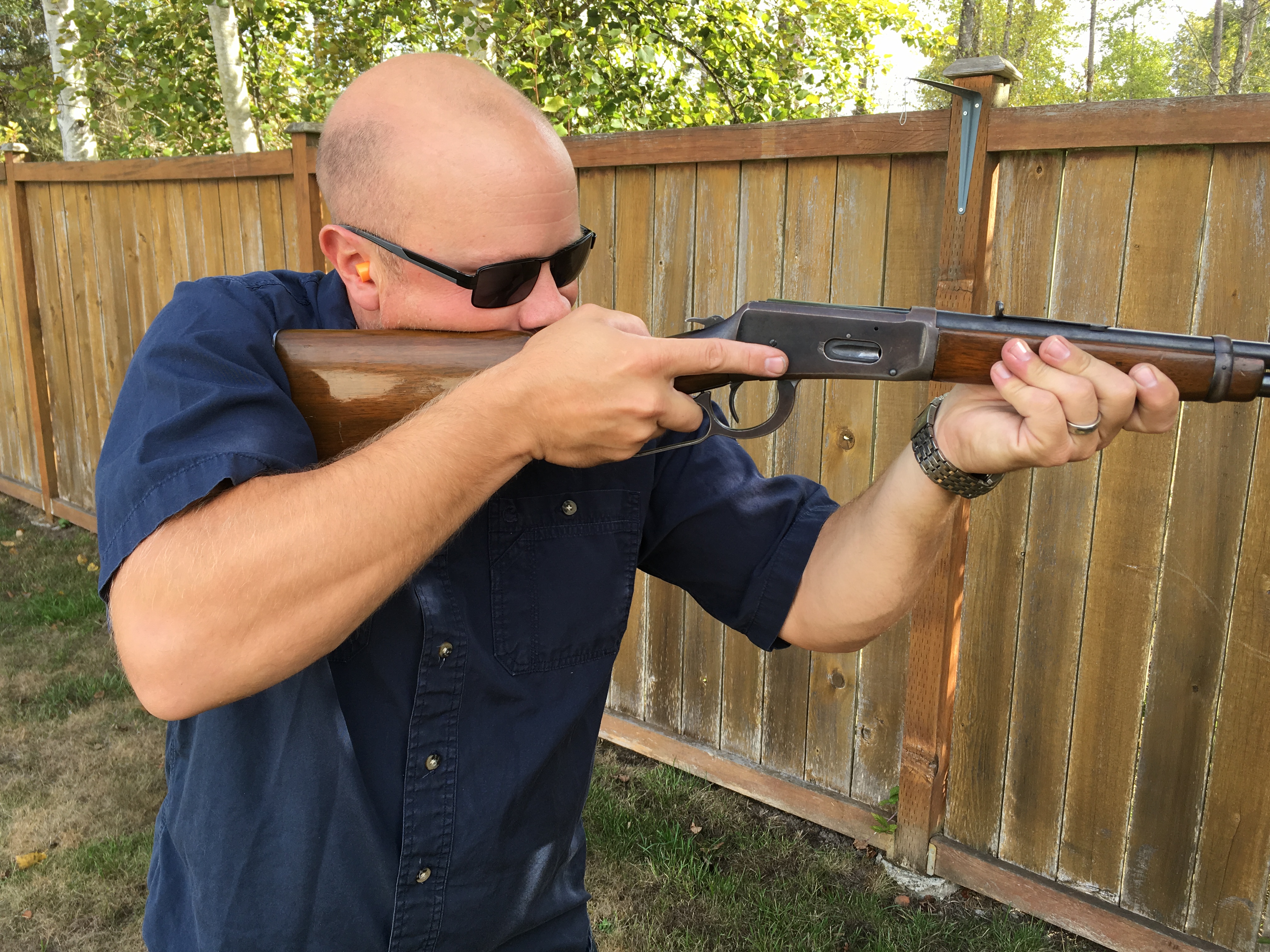 Generally when using a rifle for hunting or static target shooting, you want to hold the forend firmly with your support hand, but be fairly light on the grip with your firing hand. You don’t want to squeeze the grip too hard because the tension can cause microscopic tremors in your trigger finger which can negatively effect accuracy. If you’re using a bench rest, bipod, or backpack to support your gun, you may not need your support hand at all.

Due to the more dynamic nature of shotgun shooting, it is better to keep a firm grip with both hands. I recommend using your firing hand to pull the gun towards you, and your support hand to slightly press the gun away. This creates a stable platform, whilst still allowing you to swing the gun around to track birds in the air.

When using any long gun with a stock, firmly pull the butt into the fleshy pocket of your shoulder, or, if you prefer, onto the chest muscle. Don’t leave a gap, no matter how small, between the butt and your shoulder; this gap will allow the butt to strike your shoulder upon firing instead of pushing it – something that could be very uncomfortable!

Also with stocked long guns, you’ll need to squeeze the side of your face down on to the top of the stock to form a “cheek weld”. You’re looking to get a nice roll of cheek pressed down onto the furniture. You may have to adjust your cheek weld (or the stock itself if your firearm allows) in order to line your eye up behind the sights.

When it comes to handguns and their small size, grip is particularly important. Most handguns are designed for predominantly one handed use, but you will achieve much better accuracy and consistency by gripping the gun with two hands. 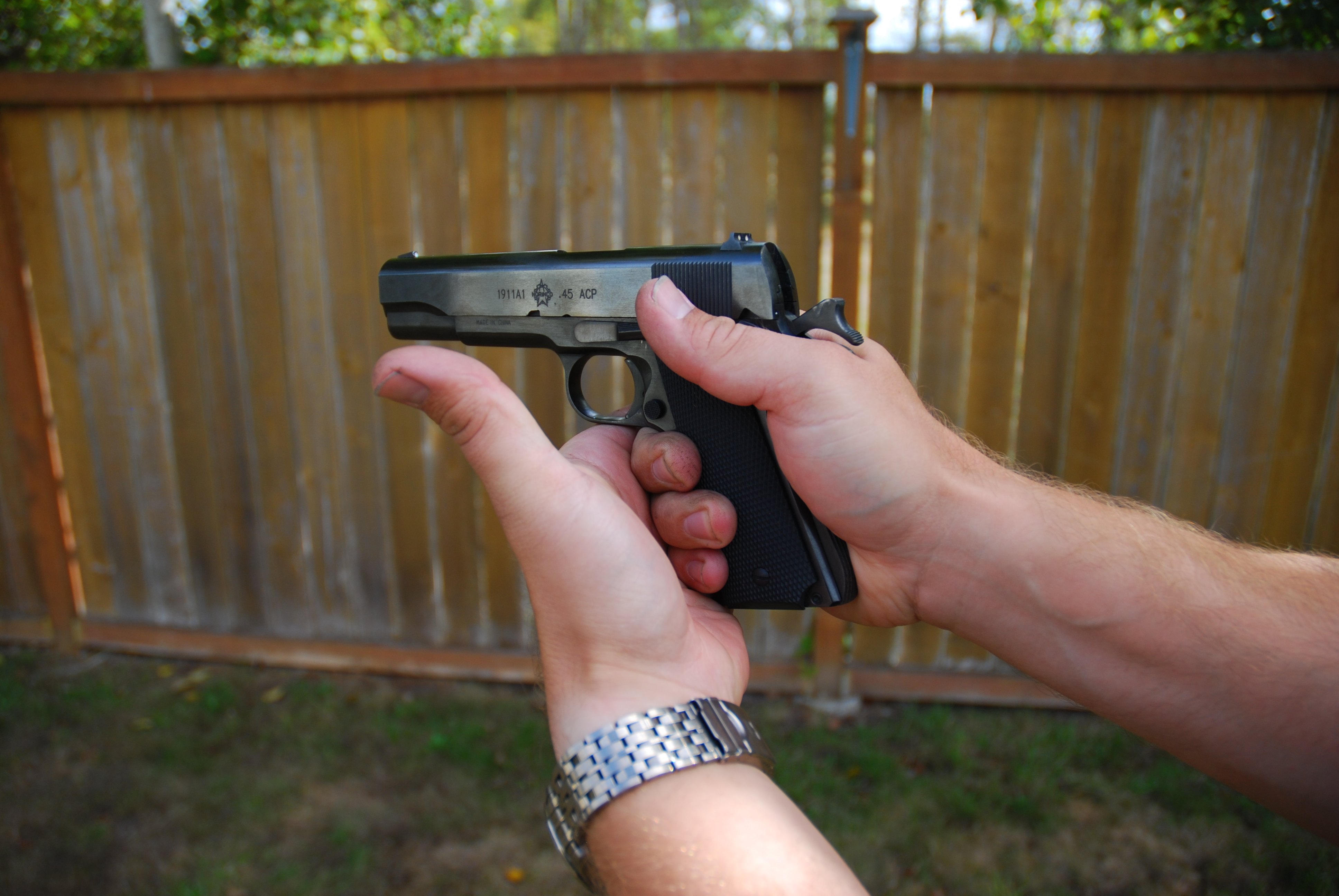 The firing hand should be placed as high on the grip as possible without impeding the hammer or slide (in the case of a semi-automatic, squeeze with the web between your thumb and forefinger tight up against the beavertail). Press your middle finger up against the bottom of the trigger guard, and extend your trigger finger straight out and place your fingertip against the frame.

Where you place your support hand is a hotly discussed topic amongst shooters. In my opinion, when you are at the range having fun, you can utilize your support hand in whichever way is comfortable for you as long as you are being safe and accurate.

No matter how you choose to grip your gun, both firing hand and support hand should be firm enough to maintain control of the gun, but not so firm that your knuckles turn white! Experiment with a few different techniques, and see which one works best for you.

Now your grip is sorted, you need to get into a shooting position, or stance. When shooting any firearm, it pays to lean some of your weight forward; this makes you more stable and able to accept recoil. Avoid leaning backwards when shooting because recoil could unbalance you and push you over.

When I’m hunting or target shooting with my rifle, I always try to anchor as much of my body to the ground as possible. This usually means laying in the prone position (on your stomach), or sitting or kneeling. If you do end up shooting a rifle from the standing position, practice until you find the most comfortable and consistently accurate position that works. Some people prefer to be square on to the target, whilst others prefer to have one leg forward in a “fighting stance”. This is very much a personal preference.

Shotguns, when used against moving targets, almost always need to be shot from the standing position to allow for freedom of movement side to side. Most people will discover that a fighting stance works better for this.

Two of the most popular shooting stances applied to range-based handgun shooting are the Weaver and the Modified Isosceles. Each has its pros and cons, but for concentrated target shooting, most people find the Modified Isosceles to be the most effective. This stance requires you to stand with your feet between one and two shoulder widths apart, knees slightly bent. Square your hips and shoulders towards the target, grip the gun with both hands and extend both arms directly in front of you. Your arms and chest now form an isosceles triangle, hence the name. 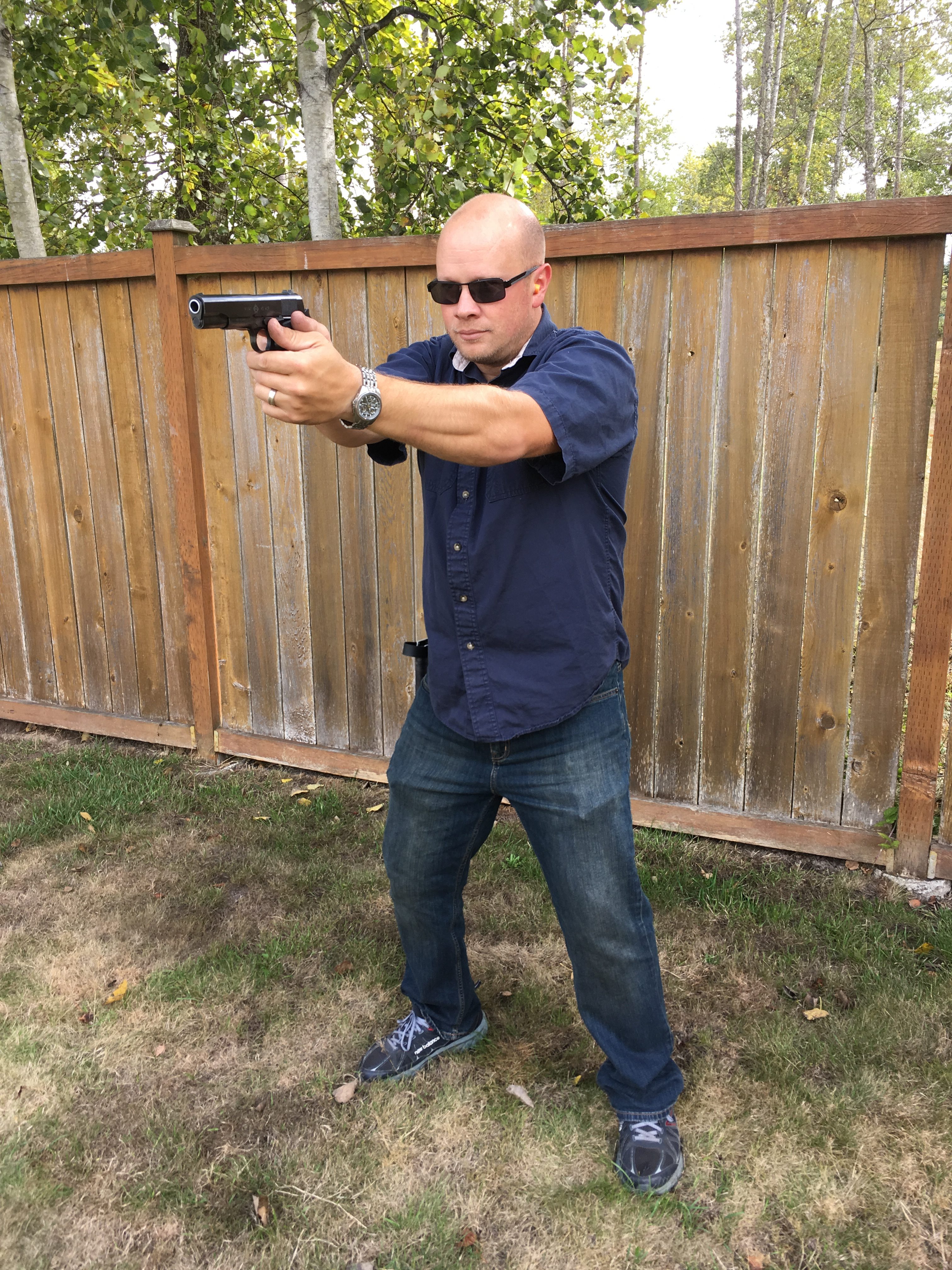 Just like with grip, I’ll say that, on the range, you can pick any position which is most comfortable for you as long as you’re being safe and accurate. Don’t feel that you have to conform to the same stance as everyone else.

When it comes to dynamic, tactical handgun shooting, there really isn’t any such thing as “stance”. Professionals who use firearms for defence purposes will rarely have the luxury of adopting a stance before they shoot. Instead, they’ll usually be in a state of constant movement. Moving towards cover, moving through a building as they clear it, moving an injured person etc. In tactical applications, you must be flexible and adaptable, and you must be able to accurately shoot your firearm from any and all possible body positions; not just those which have been given funky labels by instructors on YouTube!

Your first step is to correctly align your sights. If you’re using two point sights, such as open or peep sights, you must position your head and the gun together in such a way that aligns the front sight with the rear sight. If you’re using a single point sight, such as a scope or reflex sight, you must position your head to give the correct eye relief (the distance between your eye and the back of the sight unit) and, as you look through the sight, to eliminate any black shadows from around the edge.

You will also have to decide how to aim at a target depending on its distance from you. When a projectile (or projectiles in the case of shot pellets) exits the barrel of a firearm, it is affected by many environmental factors, the most significant of which, is gravity. Gravity constantly pulls projectiles towards the ground, so, generally speaking, the further away you aim, the more your projectile(s) will drop between exiting the barrel and hitting the target. Bear in mind that each firearm and each projectile, will have different ballistic properties, so, whilst there are many gadgets available to help with you with this, the best way to understand how this will effect you is, once again, to practice.