Believe it or not, one of the most interesting things on the SHOT Show floor for 2016 isn’t a gun at all… or at least, it isn’t a gun by the Canadian definition. It’s an airbow.

Designed by Crosman ad carried under the Benjamin banner, the new Aibow is a unique, air-powered, arrow-shooting “gun” that fires full-size carbon fibre arrows at speeds of 450 feet per second. That’s 50 feet per second below the legally definition of a firearm in Canada, making this thing legally no different from a cheap BB gun. But a cheap BB gun it’s not. Containing 3,000 PSI worth of air pressure, the Airbow contains enough air to fire 8 shots at that surprising velocity, but takes no more than two pound’s worth of effort to cock. 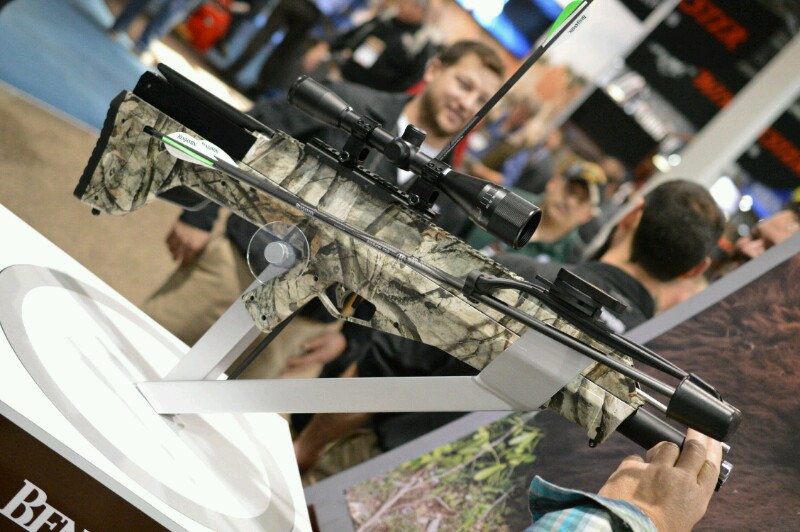 Even more impressive, it is capable of firing 2″ groups at 50 yards, thanks to the unique method by which the arrows are fired. Instead of firing a projectile down a barrel, the Airbow actually uses hollow carbon fibre arrows which are slid over a small tube that sort of comprises the Airbow’s barrel, and this tube then directs pressurized air into the arrow’s cavity. It then propels the arrow off the launching tube not unlike a paper cover being blown off a fast food straw… only way, way faster. Thanks to the energy being delivered right behind the arrow’s head, they leave the Airbow in a stable condition, with none of the wiggle or destabilization typically seen on crossbows or other systems that power the projectile forward from its rear. That’s how Crosman has managed to deliver such impressive accuracy.

Now, due to the obvious fact that this is the first device of it’s kind, the Airbow has been submitted to the RCMP but is expected to fall outside the purview of the “firearm” classification due to the speed at which it throws the arrows. However, it’s practical use as a hunting device may be more complex, as the provinces may struggle to define the Airbow as a device suitable for bow hunting season. In any case, we have been told it’s coming though, and we look forward to testing it!

The Pioneer Airbow features a black synthetic stock with a Picatinny rail system for mounting accessories and includes: