If you carry a knife in your pocket for any length of time, then you’re going to end up becoming familiar with precisely how much lint a pocket produces. Within a matter of weeks, the inside of a pocket knife is usually festooned with diminutive pocket-dust bunnies, and if you dare actually use the damn thing in an outdoor setting, then it’s highly likely you’ll end up giving those pocket-dust bunnies an entire ecosystem to live in… complete with sand, bark, dirt and all manner of other detritus.

Which is why, if you carry a knife in your pocket for any length of time, you probably get into the habit of occasionally disassembling the knife to give it a decent clean and oiling. But if you’re like most of us that carry a knife if our pocket for any length of time, you probably stop doing that right around the same time as the novelty of having a new knife wears out, at which point you just let it collect more crap until it actually starts making creaking noises when you open it. 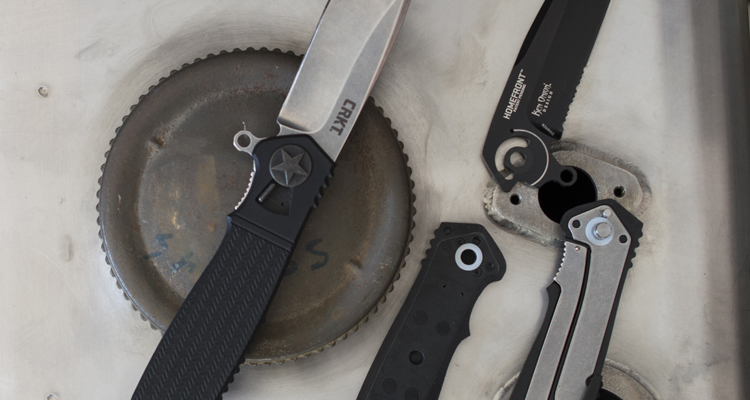 The CRKT Homefront EDC knife is designed to prevent that by making it much, much easier to service the knife. Instead of using a myriad of tiny screws to secure the scales and liner, the $100 CRKT Homefront EDC uses two securing points: A gear-like thumb wheel at one end, and a pivoting hexagonal lock on the pivot at the other. So instead of spending 45 minutes looking for your tiny Torx driver set and 15 minutes actually servicing the knife, you just turn the lock lever to its released position, and then work the thumb wheel until it comes unscrewed. In about as long as it takes to read this sentence, you can go from having a knife to having five separate parts that can be easily serviced and reassembled just as fast as they came apart.

Now, this would obviously all be for naught if the knife itself was garbage. The Homefront EDC isn’t. A Ken Onion design, the blade has the smooth and practical shape we’ve come to expect from his larger designs, with a big belly and a slight drop tip leading to an authoritative and substantial point. The blade has a very slight hollow grind to it, and has a substantial flipping stud that also serves as a great stop to prevent a slippery hand from coming down on the blade. The blade is constructed of 1.4116 Stainless Steel with an HRC of 55-57, and has a slight stonewashed finish to it. The blade measures 3.5” inches long, 0.135” wide, and the entire thing is 4.7” closed. Due to the glass reinforced nylon scales, even with the beefy blade, it’s still relatively light at 4.3 ounces. 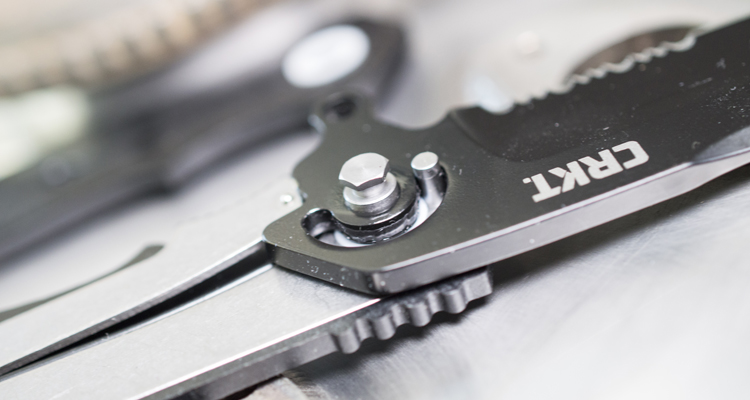 The Tactical model takes the same blade blank, but features a far more “tactical” cutting edge, with a quasi-tanto belly portion, and a serrated portion nearer the handle. It’s quite a confluence of features, with a curved portion coming off the tip, before reaching the telltale tanto kink, at which point it’s dead straight… until it reaches the serrated portion. And of course like anything else “tactical” it can’t be shiny, and so CRKT has treated the blade to a black EDP coating.

In terms of impressions, well, it’s good and bad. For example, we love the blade shape and dimensions on both, and given the use as an EDC knife, the steel’s fine. But we wish the EDC had a sharpening choil, especially given it wore a relatively toothy and fast-wearing edge out of the box, and required sharpening quite quickly. Once it had gone through our Wicked Edge sharpener, it’s proven quite a bit more durable, although you do need to be careful… that stainless steel isn’t the most resistance to chipping. 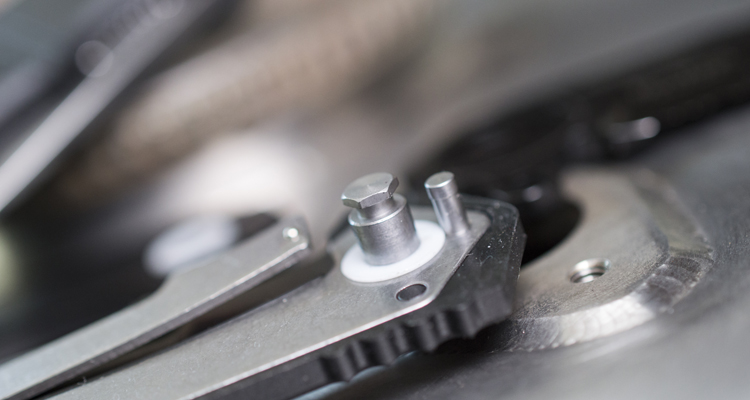 Likewise, the scales left a bit to be desired; the glass reinforced nylon is a great material for an EDC knife but it certainly won’t ever be confused with a high-end material. It doesn’t help that they seem to have been textured by Schrödinger… it’s at once both there, but not. And finally, while the pocket clip is up there with all the great low-profile clips we’ve seen, we wish we could put it on the other side since the thumbwheel tends to grate against your hand every time you reach into your pocket.

So, do we like the CRKT Homefront EDC? Yes. We do. It is a tough, dependable, practical knife that’s serviceable in every sense of the word. But we’re knife nerds… so for us, the $150 original Homefront, with a nicely detailed AUS-8 blade, and 6061 aluminum scales would be the knife for us. It gives the same great take-down ability and a similarly awesome blade shape, in a far more premium-feeling package all for just $50 more.