By far most striking aspect of the new Colt Canada MRR is the rifle’s weight. Although there are numerous small updates delineating the MRR from the previous generations of Colt Canada’s Integrated Upper Receiver platform, the main focus during this new rifle’s design has obviously been to reduce the overall weight of the rifle, and it has worked.

While many may think it’s the replacement of the quad rails with M-Lok slots that’s generated the majority of the weight savings, the reality is that most of the weight has been pared off what’s inside that svelte new handguard: The barrel.

Where previous IUR rifles featured a very heavy profile barrel from the chamber to the gas block, and then reverted to a medium profile thereafter, the new Colt Canada MRR is stepped down in every dimension. The barrel’s only as thick as it needs to be to allow the gas block to index properly (more on that later), and it’s cut down even further after the gas block. Interestingly, the longer 16″ and 18.6″ models both feature the same diameter from chamber to gas block, but maintain a heavier diameter between the gas block and the muzzle. As a result, each variant of MRR is approximately half a pound lighter than its IUR sibling; our test 11.6″ Colt Canada MRR tipped the scales at 6.4 pounds unloaded, while an identically sized IUR weighs in at 6.99 pounds. 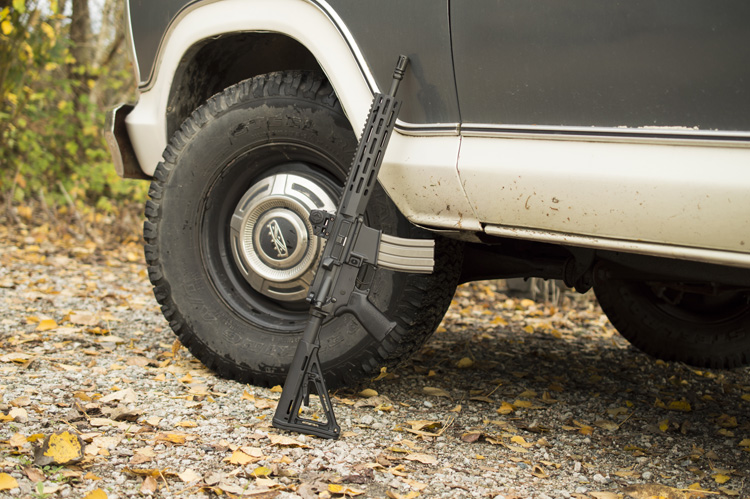 While all the rifles sport the same excellent Colt Canada cold hammer-forged barrel (see sidebar) with a 1:7 twist, the 11.6″ and 16″ models are the only ones with a chrome lined bore. The 18″ rifle, intended to fill a highly accurized DMR role, has a bare steel bore. This, combined with the longer barrel length, makes it a bit more accurate than the carbines.

In our experiences, we found all the MRR’s capable of producing sub-MOA groups with the right ammunition, and all will typically produce just over 1 MOA groups with good factory ammo. In fact, throughout Colt Canada’s own testing (which involves a great many more rounds than any civilian could ever afford) an 11.6″ carbine, like the one featured here, produced the same 1.2 MOA group with 62-grain C77 ball (Canada’s equivalent to SS109 and M855), Federal’s 69-grain .223 load using Sierra MatchKing BTHP bullets, and Hornady’s 75-grain 5.56 Match BTHP round. We found similar performance in our own testing.

The next big revision within the Colt Canada MRR is, again, found inside the handguard. One of the most significant bugaboos with Colt Canada’s IUR has been the issue of maintenance: Monolithic upper receivers do not lend themselves well to standard AR-15 barrel nuts and wrenches.

On the first IURs, two doors were installed on either side of the barrel nut to allow for access. On subsequent models, that particular issue was solved through the creation of barrel wrenches that slip down the length of the handguard, and the doors were ditched. The next problem became how to install the gas block. Until now, this was accomplished by feeding the gas block retaining pins through clearance holes in the handguard; a process that was a total pain in the ass. 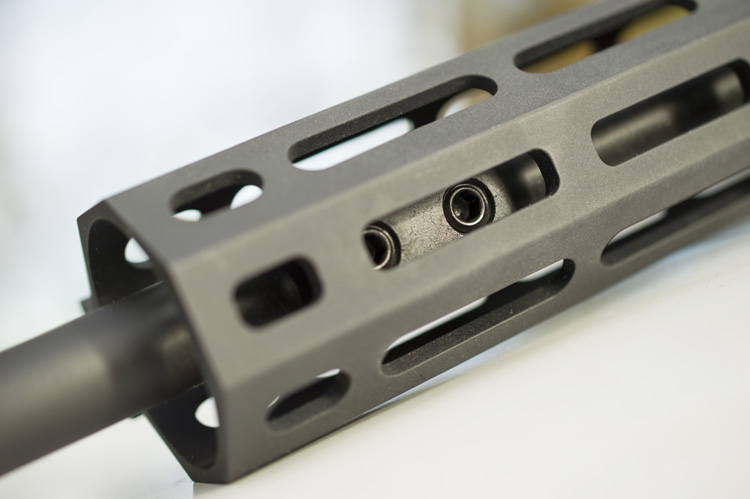 With the Colt Canada MRR, this entire system is replaced with a unique gas block, and a pair of slots machined into the barrel profile behind the gas block. Two tabs on the back of the gas block slide into those slots, ensuring proper gas block and gas tube alignment, and the gas block is then easily fixed in place by two set screws located at the 6 o’clock position and accessed through one of the M-Lok slots in the handguard. Coincidentally these screws bottom out in machined dimples in the barrel and are torqued appropriately, so short of the screws falling out (they won’t), you needn’t worry about the the gas block shooting loose whatsoever.

All three barrel lengths use the same carbine-length gas system, meaning that the gas port is just 7″ from the chamber. On longer-barrelled rifles such as the 18″ DMR, this would normally result in too much gas being directed back into the action; a phenomenon known as over-gassing. This can increase both recoil and wear. However, Colt Canada addressed the issue by tuning their gas port size and chamber specifications to ensure correct gas metering, and then confirmed their findings by verifying the bolt carrier velocity through high-speed video footage. 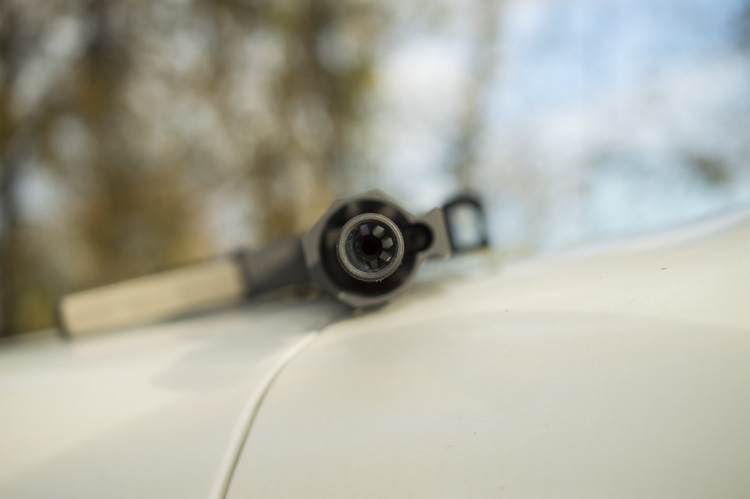 This brings us to the obvious update: The handguard. Where previous generations of Colt Canada’s monolithic rifle featured some assortment of picatinny rails in various positions, the MRR handguard has simple M-Lok slots. M-Lok, a Magpul-derived accessory attachment system, uses simple screws with t-nuts on the end to fasten accessories to the rifle. The accessory is fitted to the handguard, and the screws tightened; it’s that easy. In short, it is a great system.

Of course, it’s not the only system, and much has been made of Colt Canada’s decision to opt for M-Lok over the comparable KeyMod system. When asked directly why M-Lok was selected, the answer from Colt Canada was simple: The Colt Canada MRR is designed to meet the requirements of the US Army’s M4A1 Plus rifle program. And within those requirements, an enhanced handguard assembly is outlined, and the US Army prefers M-Lok. 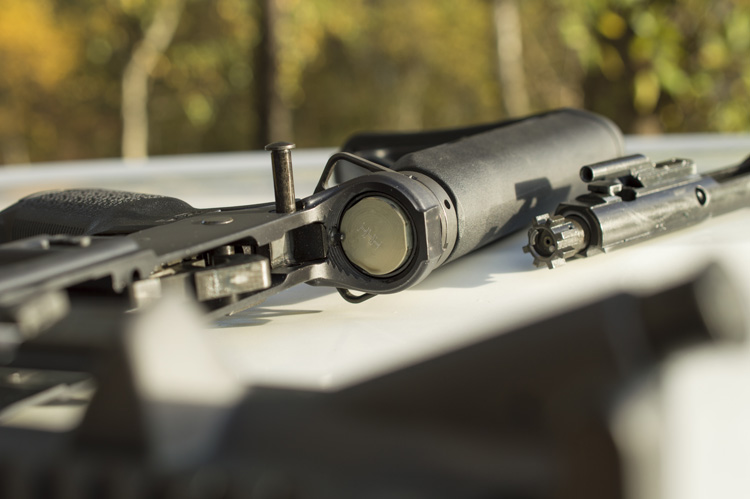 Not that it’ll make your gun go full-auto of course, it’s just a bit heavier than a semi-auto bolt. Likewise, the buffer is slightly heavier than that found in the IUR as well; the Colt Canada MRR employing a HHH buffer that weighs 0.9 oz more than the IUR’s lighter 4.7 oz HH buffer.

As a result of this combination, the MRR features the heaviest reciprocating assembly available in a mil-spec (ie. not commercial) AR-15 pattern rifle; a combination chosen by Colt Canada’s engineer’s to help fine-tune the bolt carrier speeds and ensure 100% reliability.

Finally, below the rear takedown pin, you’ll find the blight that all Colt Canada rifles are issued with: An Accu-Wedge. A rubber wedge designed to eliminate any play between the receivers, this incessant chunk of frustration does nothing but make a rifle harder to take down by putting constant strain on the rear takedown pin. Externally, the gun comes fitted with a six-position Magpul MOE stock and pistol grip. Although we’ve never complained with the standard Colt Canada stocks and A2-style grips, the more modern Magpul furniture suits the new MRR, and feels great. 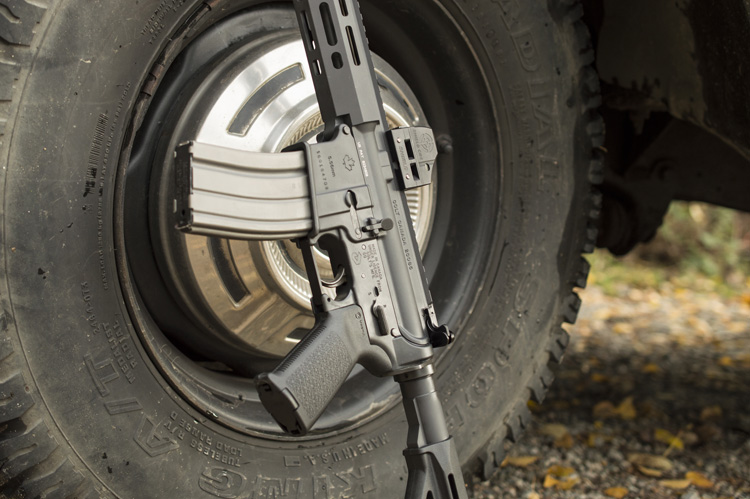 However, when it comes to the included accessories, we do have a couple of complaints. First off is the MRR’s lack of ambidexterity. We already know Colt Canada manufactures ambidextrous lower assemblies with simple ambi safeties and Norgon magazine releases, and given MRR prices start at $2,350 and go up from there, we don’t think it’s beyond the realm of reason to expect these rifles to come out of the box lefty-friendly. Furthermore, at $2,350, they really should come with some sights! But hey, the included Lancer L5 5-round magazine is really nice, so it’s not all bad.

Now, we’ve shot a lot of Colt Canada MRRs. We first tested them about a year ago at a military event in the USA where no cameras were allowed, and the security guards were checking car trunks. We’ve since shot those same pre-production samples numerous times with no failures, and have put over 1,200 rounds of mixed ammunition through our own 11.6″ tester. In fact, probably no other rifle we’ve tested has accrued the round count this diminutive Colt Canada MRR has in such a short time.

Furthermore, it was also used to introduce a pair of journalists to the world of shooting, as well as countless fellow range users interested in shooting an AR-15 for the first time. It has never failed. Yeah, we’ve cleaned it occasionally, but it’s never failed to do what it’s supposed to regardless of the conditions. 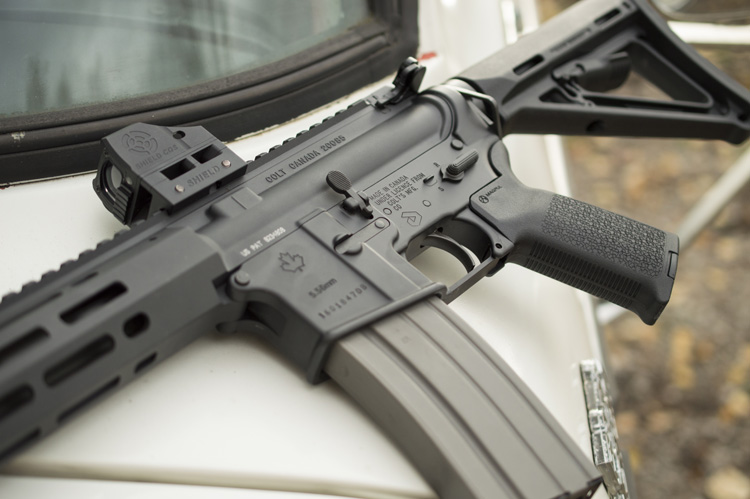 During testing, we mounted a Shield CQS red dot sight with Shield’s great 65-MOA ring, 1-MOA dot reticle atop the rifle, and it’s been a perfect pairing. Without anything else on it, the rifle is extremely light, and makes shooting a real pleasure. Even maintaining a stable off-hand position for prolonged periods isn’t difficult, and with the short barrel and all the weight Colt Canada has shaved off the front end, it’s incredibly nimble. Transitioning from target to target is quick, and reacquiring a target after a shot is similarly fast.

We momentarily thought about putting a muzzle brake on it to see how much faster we could shoot it, but then remembered… we like our eardrums and few things sound as belligerent as muzzle braked, short-barreled AR-15s. 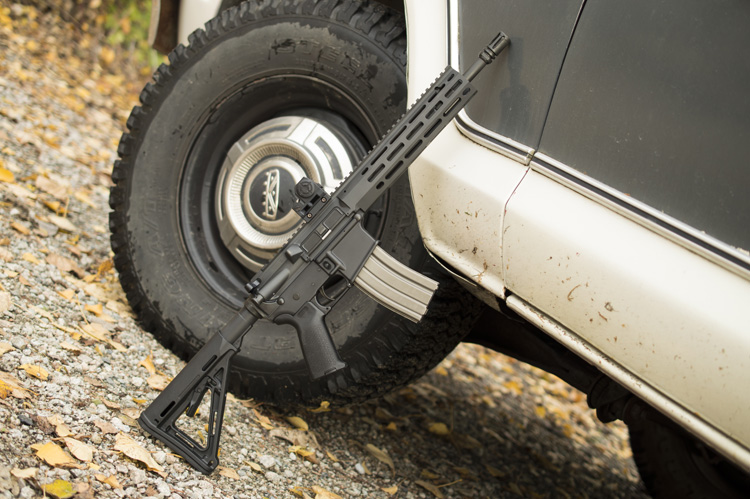 And realistically, recoil is nothing to write home about on the 11.6″ rifle, nor on any of the others. As mentioned, there have been some concerns that a carbine-length gas system puts too much gas into the bolt on the longer rifles, but Colt Canada’s tuning obviously works and recoil feels about on par with what we’d expect. Granted, we don’t have Colt Canada’s high speed camera around to confirm bolt speeds, but we did stand in the middle of a desert in the USA with both full-auto and suppressed Colt Canada MRR samples firing all day long and we saw absolutely no failures through many thousands of rounds… so they must be doing something right. This is an utterly reliable rifle.

It’s also worth noting that besides reliability, this new Colt Canada MRR feels much better. The lightened handguard doesn’t only help accomplish that half-pound weight reduction, but the slender profile afforded by the M-Lok system really reduce its overall size.

The entire handguard is just over 2″ tall and about 1-3/4″ across left to right, so it’s easy to wrap your whole hand around it, and that combined with the lighter weight gives the shooter a lot of authority over where that muzzle is pointing. That in turn creates confidence, and makes it a great rifle for those of smaller stature that might find a heavier rifle daunting. 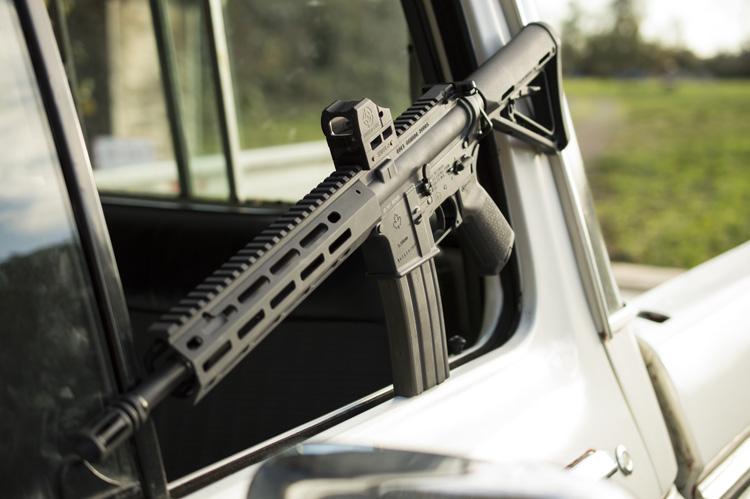 It is exactly as you expect. Given the Colt Canada MRR design was created to meet the requirements of a rifle intended to go to people like the Marine Corp Special Operations Command, it’s well thought out, and is obviously assembled with the same care and attention Colt Canada lavishes on all its guns. Remember, they don’t have seperate commercial and military production lines; everything they make is to the same standard and that standard is “someone’s life may rely on this” quality.

But, it’s pricey. And it doesn’t come with sights, or ambi controls, which is disappointing, given the price point. Honestly, we thought it was a bit overpriced, at least until we started to actually spend some serious time behind one.

Then we realized what it is, and where the value lies. It’s a rifle for the guy that doesn’t want to tune, build, or otherwise dick around with his gun. Because you won’t need to do anything to it besides stick an optic on it, buy an M-Lok sling swivel, and double your ammo budget. It’s utterly reliable. It’s superlatively well-made. And best of all, it’s made right here in Canada, so we give it two enthusiastic thumbs up.