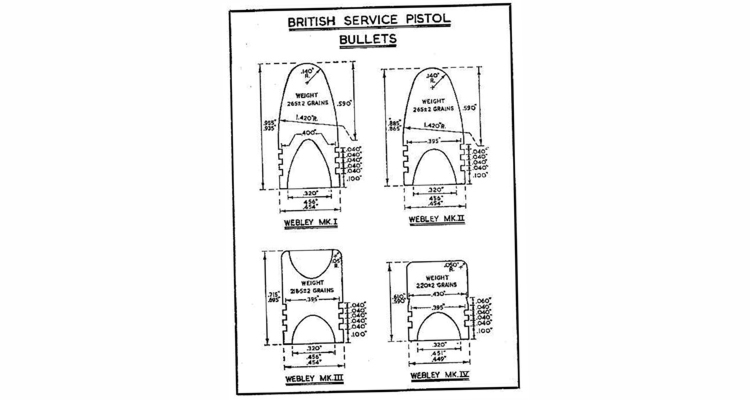 Around the turn of the last century, when England was still basking in the afterglow of creating one of the largest empires on earth, an unfortunate series of events with Afghan tribesman and Zulu warriors highlighted a very specific hole in the English ability to project force: Their pistols were terrible.

At the time, the English were still using percussion cap pistols, while Americans were in the midst of transitioning to self-contained cartridges and the Colt Single Action Army. However, while the US military’s purchase and procurement decisions played a huge role in the civilian acceptance of sidearm and ammunition choices in America, England’s relatively strange treatment of pistols as both an officer’s weapon, and a weapon that officers themselves were required to procure on their own, meant that there no single “huzzah” moment for pistols in England. Rather, the development of England’s first widespread self-contained metallic cartridge for pistols was something of a meandering journey, beginning with the short-loved Enfield pistol and this, the much longer lived .455 Webley cartridge.

But back to those percussion cap pistols. Usually of the 54-bore variety, these big, archaic old pistols initially met the progression towards metallic cartridges head-on; with many being converted in an effort to save their owner’s the expense of acquiring a new gun. Due to the 54-bore barrels being basically .450 calibre, a stop-gap cartridge was created called the .450 Boxer, which was specifically designed for these converted 54-bore percussion pistols. Eventually the .450 Boxer would become known, in grand English fashion, as the .450 Adams Mk 1.

It was around this time that the .450 Adams’ performance was tested against recalcitrant Afghan tribesman and Zulu warriors, where it was found to put up at best dubious performance, oftentimes varying from “slightly annoying” to “almost nearly lethal.” So, in the 1870s the British government commissioned a new pistol that would accept a newer, more powerful ammunition. That pistol? The Enfield revolver produced by the Royal Small Arms Factory at, not surprisingly, Enfield. But the problem persisted. Demonstrating the true brilliance of military procurement programs, the new Enfield pistol’s production ramped up before testing on the accompanying .455-calibre ammunition had been completed, and so officers who had purchased the new pistol were issued .450 Adams ammunition to use in their new pistol.

However, even after .455 ammunition was ready and delivered to end users, the Enfield remained problematic. The combination of poor performance, dismal reliability, and a handful of copyright claims eventually resulted in the British government approving a second pistol for military use: The Webley. A top-break, automatically ejecting revolver, the Webley would finally put to rest the British military’s sidearm woes and would serve as the English (and Commonwealth’s) pistol for nearly a century.

So what about the .455 Webley round? Well, the initial evaluations carried out by the British government during those early days of the Enfield revolver involved both military testing as well as consultation with England’s police forces. In truth, at the time officers who were expected to carry a sidearm were rarely expected to actually shoot it, and so the feedback and input of the police weighed quite heavily. These officers frequently found their pistols deployed against heavily clothed individuals in very tight spaces, and so, the natural tendency was to favour a heavy but slow round with minimal recoil; the thinking being that such a round would carry sufficient energy across the small distances it was expected to be shot without incurring excess recoil to spoil any follow-up shots.

And they weren’t wrong. Although never really considered an overly powerful cartridge, the big .455 Webley was popular, and spawned six different variants, or marks. The Mk I round, the earliest of the .455 varieties, used a 265-grain lead round-nosed bullet propelled by black powder. Created in 1894, it was then replaced just three years later by the Mk II, which traded the black powder for more modern cordite and subsequently shrunk the case length to save space without reducing velocity. Notably, due to the cartridge headspacing on the rim, Mk I ammunition remained compatible with Mk II firearms.

However, it was the Mark III, or “Manstopper” round that really elevated the .455 Webley to the memorable status it enjoys today. A massive 218-grain lead slug, the Mk III’s projectile was essentially a lead column with huge hemispherical hollows on both ends, making it a “dum dum” or hollowpoint bullet. Introduced in 1898 and immediately banned from military use by the Hague convention in 1899, the round remained in service with police officers, civilians and colonials who appreciated its knock-down lethality.

Meanwhile, on the military side of things, .455 Webley development continued with the Mk IV and V cartridges. Both of these built on the development of the Mk III round, but looked to avoid the same prohibition by using a solid, flat nose rather than a hollowed-out nose. A shape that we would now know as a wadcutter, these rounds were still solid lead and so would flatten dramatically on impact; in fact the results were so dramatic that the only improvement made for the Mk V model was the use of a harder lead allow to resist the round’s ability to pancake. However, it wasn’t long before these too were considered unsportsmanlike by the Hague, and so too were prohibited in November of 1914.

Which brings us to the final and longest lived .455 Webley round: The Mk VI. Specifically designed to comply with the Hague Convention (rather than skirt it), the Mk VI round used a conventional full-metal jacketed roundnosed bullet weighing 265-grains backed by between 5.5 and 7.2 grains of cordite, or 5.5 grains of nitrocellulose. Identifying the propellant on service ammunition was accomplished by a “VI” headstamp while nitrocellulose rounds were stamped “VIz.”

Of course the .455 story doesn’t end there. The round, or variants thereof, would wind up in semi-automatic 1911 pistols as well, and would serve all over the world right up to and through World War II. A good, reliable round in a well-designed pistol, it remains in production today with both Fiocchi and Hornady but is not cheap, and so has become relatively popular amongst handloaders.