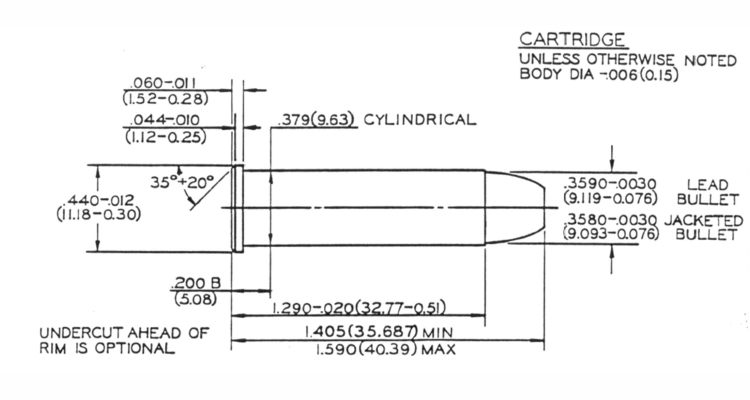 If you ask a Calibre’s publisher what the best pistol round in the world is, the answer will be rabidly bubbling forth from his lips before you even finish the sentence: “.357 Mag.”  And so as a result of this inane obsession, and the pair of .357 revolvers located just a few pages ahead of this position, we turn our focus to one of the most recognizable and respected rounds available.

The story of the .357 Mag’s inception is one that hearkens back to the roaring 30s; an era filled with Tommy guns, gangs buoyed by bootlegged booze from Canada, and some of the wildest and bloodiest gunfights in American history. During this time, firepower was making leaps and bounds forward, as was the protection from that same firepower. Ballistic vests were in there infancy, and gang members had learned their automobiles provided sufficient protection from their pursuer’s lethargic .38 Special revolvers; both presenting significant problems for the police officers and G-men of the day.

At the time, testing was relatively limited and the understanding of terminal ballistics was not what it is today, leading researchers to believe that the key component in defeating these new forms of cover lie solely in velocity; at the time the Colt .38 Super was the only handgun round travelling faster than 1,000 feet per second and just happened to be the only round capable of penetrating vehicles and these early protective vests.

However, simultaneous to this work on developing a more powerful revolver round for duty and carry use, a gentleman by the name of Elmer Keith had been slowly working up hotter and hotter loads for the venerable .38 Special. A key component in his experimentation were revolvers like the Smith & Wesson .38-44 Heavy Duty and Outdoorsman. These revolvers, designed for high-volume shooting and target work, consisted of frames and cylinders built for use with the more powerful .44 Special but bored and chambered for .38 Special. As a result, these super-strong .38 Special revolvers provided Keith with an ideal testbed to test the limits of the .38 Special propensity for power. And so he did, eventually concocting the .38/44 High Velocity. So named for the .44-sized guns from which it was fired, this round was roughly the equal of the modern day .357 Magnum, but would fade into obsolesce… and for good reason.

See, the .38/44 HV used a .38 Special-sized case. So, potentially, there was nothing stopping someone from putting one into a .38 Special-sized gun… with special-sized results. For Smith & Wesson, who was keen to reassert itself as the policeman’s handgun of choice, this obvious safety oversight wouldn’t do. So, Daniel B Wesson II worked in concert with Phillip B. Sharpe (a member of the NRA’s Technical Division) to modify Keith’s .38/44 HV, making the round distinct by elongating the case by one-eighth of an inch. By doing so they created a round that could not be chambered in a .38 Special revolver.

Obviously the rest, as we know, is history. The round continues to serve as a self-defence round against everything from would-be assailants to predators like cougar and bear, providing up to 800 ft. lbs. muzzle energy from your average 4” barrel. Popular loadings vary from 110-grain lightweights to big 180-grain pounders, and velocities can vary from just under 1,000 feet per second all the way up to 1,700 feet per second. Generally though, most decent .357 Mag loads will involve a 150 or 158 grain bullet doing between 1,200 and 1,500 feet per second, from your average revolver.

But one of the best parts of shooting a rimmed case like the .357 Magnum is the flexibility they afford; you can pump them downrange from revolvers or lever-action rifles, making them a great option for the average Canadian that wants to load for one round but use it on the range and afield. So what can you expect from .357 Magnum out of a lever gun? Well, take all the above figures and increase the velocities by about 50% and double the energy delivered at the muzzle. In fact, Buffalo Bore claims their “Heavy” .357 Magnum cast 158-grain load will generate 2,153 feet per second and deliver 1,626 foot-pounds at the muzzle… that’s more energy than plenty of .30-30s produce.

And really, that’s the best part about owning anything chambered in .357 Magnum; the flexibility. Want to practice cheaply? Shoot some nice and soft .38 Specials. Wanting a bit more thump for those range plates? Pick a light .357 load. Heading into the backwoods? Load a properly stout 158+ grain load into a carbine and keep your shots inside 70 yards. It’s really one caliber that can do (almost) everything within practical reason, and can be a ton of fun for all those impractical uses too, like making fireballs and knocking steel around. And for those reasons and so many more, our publisher loves it… and we do too.