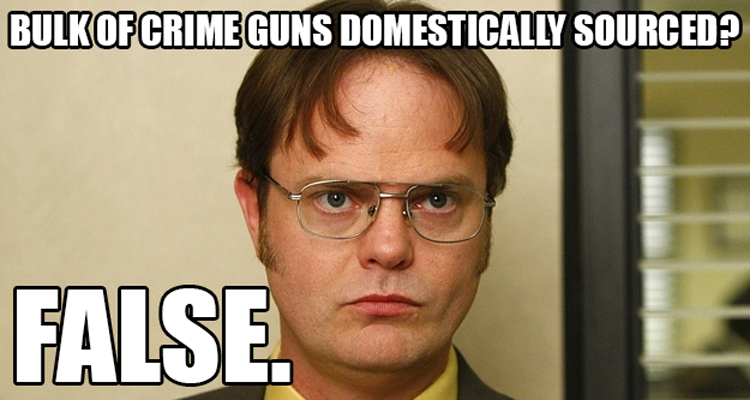 For years now, a popular allegation has been the declaration that the “bulk” of so-called “crime guns” in Canada are being sourced domestically. A popular headline that’s again making news in light of a recent BC Illegal Firearms Task Force report (a report that, by the way, contains no actual analysis of the source of “crime guns” in British Columbia), this allegation flies in the face of reports from police that claim the majority of guns encountered on the street are illegally sourced from the United States, oftentimes in trade for Canadian narcotics.

The 2015 BC Task Force report makes the following claim:

“Historically, most crime guns were smuggled into Canada from the U.S. Over the past three years in B.C., however, approximately 60 per cent were sourced in Canada, according to data from the National Weapons Enforcement Support Team (NWEST). NWEST attributes this trend to changes in firearms legislation in states such as Washington and Oregon requiring recordkeeping at the point of sale for all firearms, which allows tracing to identify a purchaser.”

However, according to the 2014 Annual Report, Western Region, produced by the Firearms Investigative & Enforcement Services Directorate and Firearms Operations and Support Unit, nowhere near 60% of all crime guns can be traced back to domestic sources. The report was uncovered by Dennis Young, who made repeated attempts to procure the information through an ATIP request, and who was initially told by RCMP staff that no such report existed before finally receiving a heavily redacted version of the report in question. 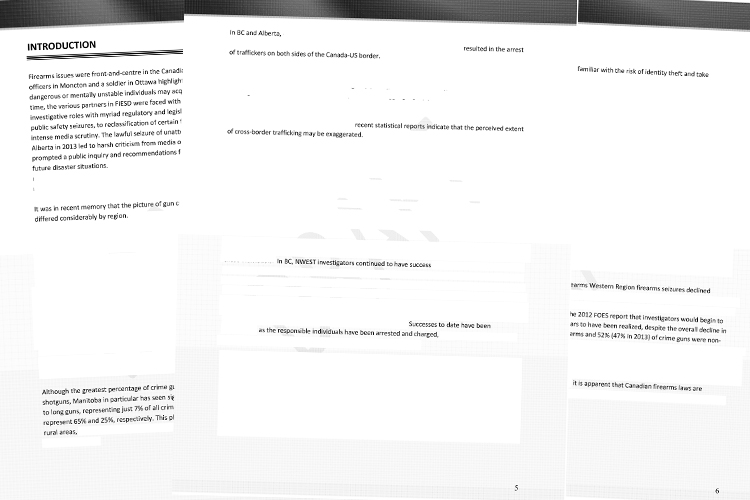 The 2014 report continues, alleging that 1,140 “crime guns” (defined as any gun that was illegally acquired, suspected to have been used in a crime, has an obliterated serial number, or has been illegally modified) number among the 2,215 seized firearms, and of these 1,140 “crime guns” just 97 were found to have been registered in CFIS or the restricted weapon registration system (RWRS). In other words, just 8.5% of crime guns were immediately found to have originated in, or have links to lawful Canadian ownership.

Furthermore, 783 of these “crime guns” were submitted for further investigation, through a process known as “tracing,” which was successful in 229 (29%) of the 783 cases. Of the 229 successfully traced firearms, the source of the firearm was found to be domestic in 50% of cases, while smuggling was found to be the source in 48% of the cases. In other words, of the 783 firearms submitted for tracing, just 115 (or 15%) were found to have been sourced domestically.

The study also found non-tracing methods of investigation provided positive identification of many more firearms, claiming that non-restricted firearms were often not submitted for tracing due to “the most recent possessor is often either known, or can easily be discovered with a simple CFIS query.” Notably, this statement stands in stark contrast with the allegation put forth in the 2015 BC task force report, which claims that non-restricted firearms “cannot be traced by law enforcement and are not subject to regulatory oversight.”

The combined total of all firearms identified by the study, through any method, as having been domestically sourced totals just 377 of the 1,140 crime guns analyzed. That’s 33%…. a far cry from qualifying as anywhere near the “bulk” of crime guns.

And this isn’t news, either: a similar report from 2008 entitled “A Report on the Illegal Movement of Firearms in British Columbia” claimed “the sources of crime guns has remained consistent; a large portion of the crime guns recovered in Canada can be traced to dealers in the U.S.” Similarly, a 2005 report from the Vancouver Police Department estimated that “estimated that 94% of the guns seized by them in 2002 originated in Washington State in the United States.” A 2006 report from the Toronto Police Service, problematic due to the self-admitted inconsistent nature of the data, found handguns to be the most popular crime guns and analyzed the source of 327 handguns recovered from crimes in Toronto. Only 181 were able to be successfully trace back to their origin, and of those 181 guns, 120 (or roughly two-thirds) were found to have been smuggled from the United States. Finally, the Annual Report in 2000 for Toronto Police Service traced 705 crime guns, and found 69% could be traced back to a US gun dealer, 10.5% were sourced domestically, and the remaining 19.5% could not be traced.

2008 Report on the Illegal Movement of Firearms in British Columbia