Look, we get it.  The AR-15 works, probably as well as any .223 ever will.  It’s got a rich history and decades of product development behind it; it’s been deployed in countless battlefields by every non-former-Warsaw Pact country that could field a unit of serious trigger pullers.  The AR-15 is just fine. 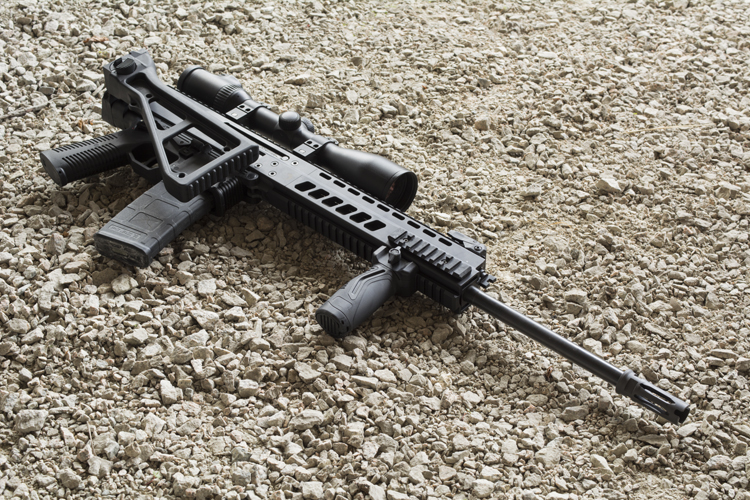 But do you ever just want to shoot something…different?

What if we told you there was a rifle of exacting quality, which took the same magazines as the AR-15, a rifle which Larry Vickers called “the sleeper of SHOT Show 2015”, and it’s available in Canada?

And you can get it in a non-restricted version?

That, friends, is the Brugger and Thomet APC223. 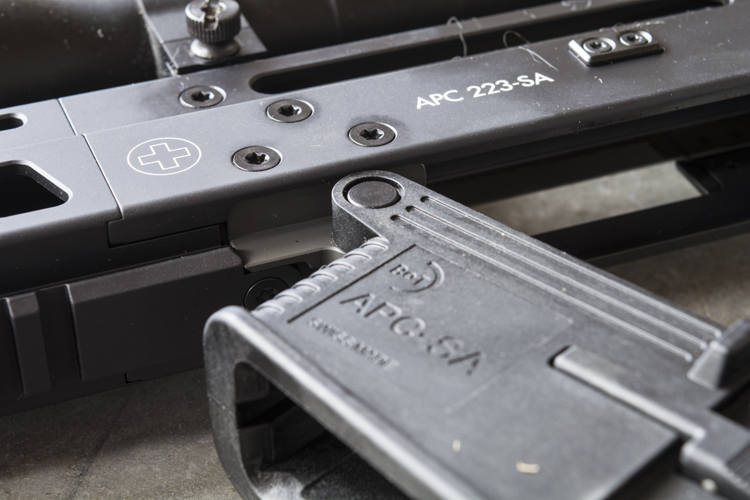 For years, people wanting a quality alternative to the AR have looked at the more established Swiss fighting rifle, the Swiss Arms 55X series, and for good reason.  They’re accurate, dependable, attractive machines.  But they were designed a long time ago now.  Mounting optics or accessory lights is an issue; they’ve got cheek weld issues; they’ve had their legal battles.  They’re almost a throwback to the battle rifle era: they’re just not modular in the way we now expect service rifles to be.

But nobody disputes the quality.  No, if there’s one thing we know for certain, it’s that great rifles come out of Switzerland. 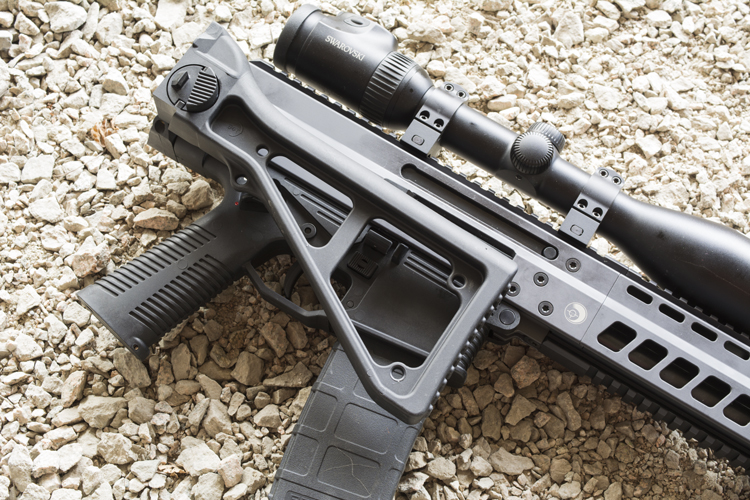 Well, once again, the Swiss have done it, although this time, the company with the non-restricted alternative is Brugger and Thomet (or, technically, B&T AG, although the abbreviations and model numbers get a bit confusing if you just start piling up letters and numbers a few at a time.)  A boutique manufacturer of quirky exotica, B&T got their start building sound suppressors for the domestic market in Switzerland, where not going deaf is apparently a value understood even at the government level.  The profits made on their suppressors were rolled back into the company, and thirteen years after their initial launch in 1991, B&T shifted into the design and manufacture of their own firearms.

Fast forward another thirteen years for good luck, and you’re back in the present day, when the notoriously picky Canadian Firearms Laboratory has officially put the non-restricted stamp on the 18.8” barrel version.  And a day when the importer of these rifles has bravely entrusted a Swarovski Z6i-equipped model to a horde of wild-eyed gun writers, and hoped something good would come out of it. 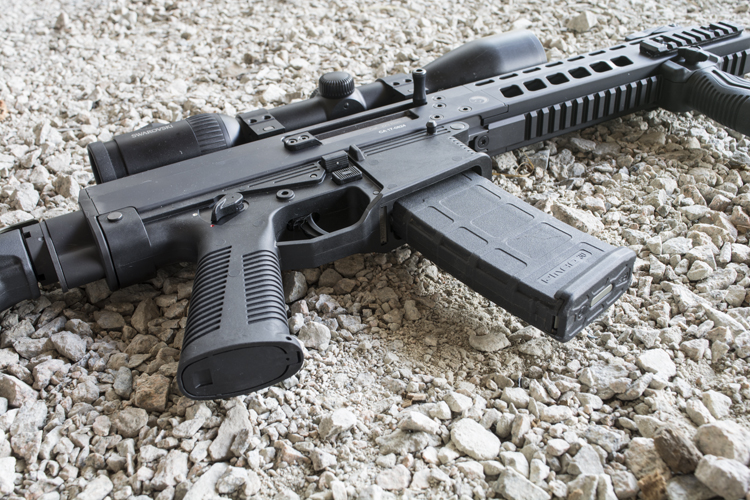 On popping open the case, our first reaction was “this is a big rifle.”  It’s very much a product of the current era of rifle design, which tolerates a bit of extra bulk in exchange for parallel mounting surfaces.  The receiver is longer and taller than an AR-15, housing a hefty bolt driven by an operating rod in a conventional short stroke piston design, and gives the APC a somewhat boxy appearance when viewed from the side.

This reaction, however, overlooks the slim profile of the APC223.  Aside from the charging handle, which naturally projects from the receiver, the widest point on the entire gun is the magazine well, and the vertical bulk disappears once the rifle is shouldered.  It’s a heavy machine, with an official listed weight of 4.1kg, or nine pounds, although B&T includes the weight of the magazine in that figure.  The balance is a little nose-heavy, but that can be partly attributed to the 1:7” twist Lothar Walther factory match barrel. 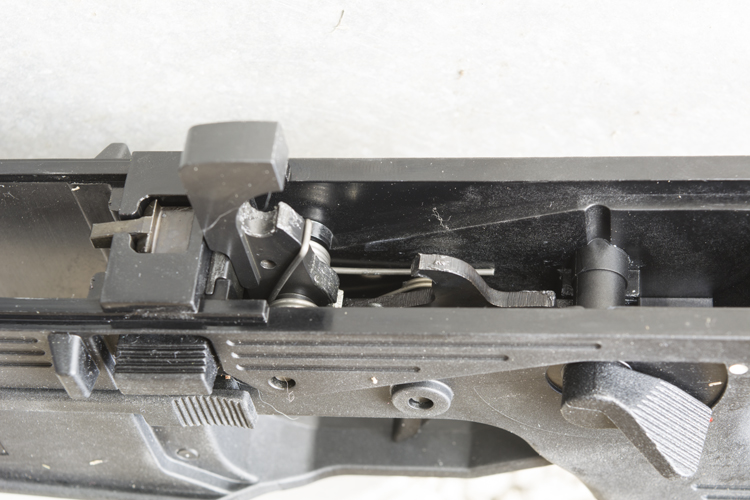 Controls are interesting: the fire control in particular is rather nice.  In fact, once one gets into the operation of the APC223, the appeal becomes clear.  The trigger is excellent for a service rifle: fairly short, very crisp, not overly light but very manageable at around five pounds, and extremely smooth.  Reset is very positive, with a pronounced but inoffensive “clunk” as the sear resets.  The ambidextrous magazine release is accessed with the index finger, as is the bolt stop, which is engaged by pressing upwards on the button while racking the slide.  The bolt can also be easily released with the index finger without breaking the grip, making this one of the best rifles we’ve ever seen in terms of layout.

The charging handle can be oriented right or left, and it reciprocates with the bolt carrier, a feature which seems almost ancient now.  But it’s entirely reliable and the ability to change the orientation of the handle makes the reciprocating handle a non-issue in all but the most fervently dogmatic. 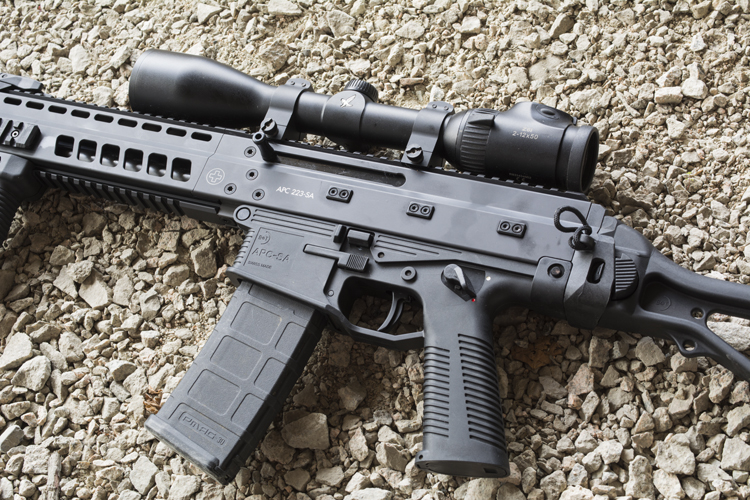 But we would be remiss, while in the region of the charge handle, if we did not direct you towards the feel of the action.

If you buy an APC223, we are willing to bet that the first time you cycle the action by hand, your jaw will literally drop.  It is the most obscenely smooth action we have ever felt on anything which wasn’t a full custom bolt gun.  We couldn’t stop racking it.  It’s just staggering.  It feels as though it rolls on ball bearings.  It’s unreal.

But none of this means anything if the gun doesn’t run, so the next step was obvious: to the range!

We settled in at the Abbotsford Fish and Game, and started warming up.  The APC223 as shipped had a spectacular optic on it: the superlative Swarovski Z6i 2-12, which is near perfection as far as field scopes go on a general purpose rifle.  We began to punch holes at everything from pistol distance on out, but once we felt good and loose we began to focus on real rifle work.  The APC is, frankly, too heavy to run fast in close; if you’re looking for a quick-handling carbine, this is not your huckleberry.  The weight and length make it feel more like a battle rifle, but then these days, the .223 is getting run out to battle rifle range, so why not treat it as such?  With a nearly 19 inch barrel, it’s certainly closer to the original M16s than to the shortened renditions so many of us default to these days.  Buy a rifle, get rifle performance.  That doesn’t seem unfair. 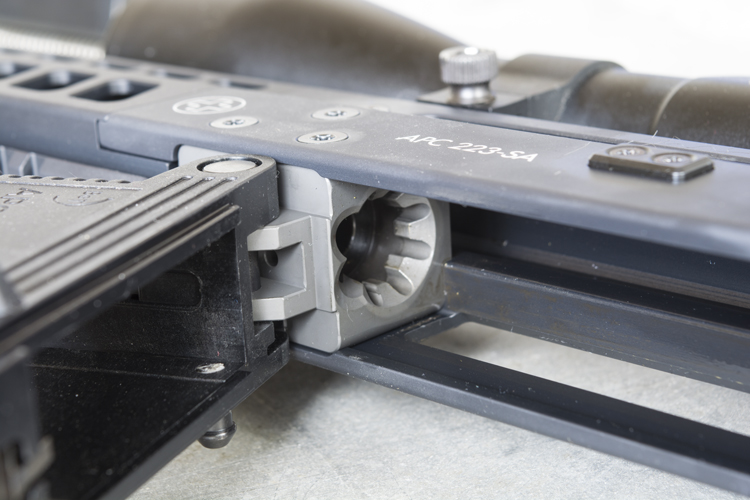 One thing we can certainly say about the APC223: nothing we did affected its reliability.  There were no magazines it did not like, and we tried LAR Grizzly mags, second and third generation Magpul P-mags, pinned-for-your-safety Beowulf mags, aluminum D&H mags, everything.  Every magazine locked in, every magazine fed perfectly, every magazine ejected perfectly.  We’ve got some “tier one,” as the kids say, AR15s that can’t say the same, so we’ll give a point to the APC223 on that score.  It runs like a champ.

Accuracy results were, however, mildly disappointing.  All groups were fired at 100 yards from a rest in minimal wind, and while as always we can’t claim that they are the actual theoretical limit of mechanical accuracy, they’re very likely as close as any normal user will ever see. 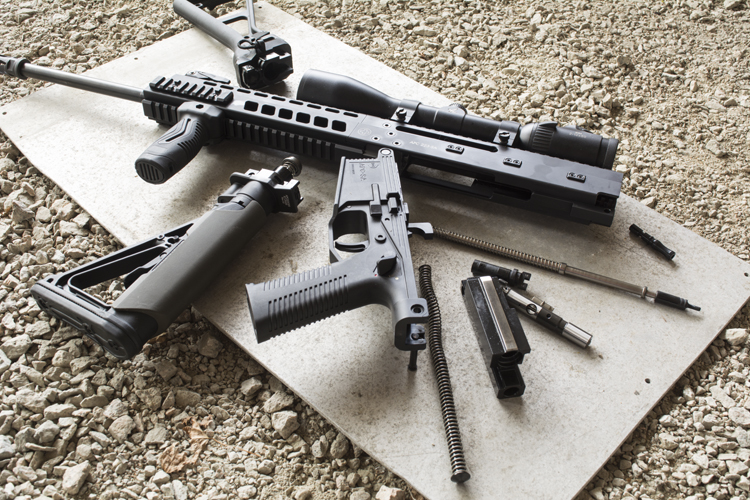 The best group came from Remington Premier Accutip 50 grain polymer tipped boat tails, at 1.53 MOA.  That’s pretty decent accuracy, of course; the mechanical limits of the gun could be close to 1 MOA.  The mean radius was 0.61 inches, so you should be confident that the point of impact will be within two thirds of an inch of your point of aim at a hundred yards.  That’s really nothing to sneeze at.  But the action is so absurdly smooth and the barrel so nice, we thought we’d see laser-like precision. 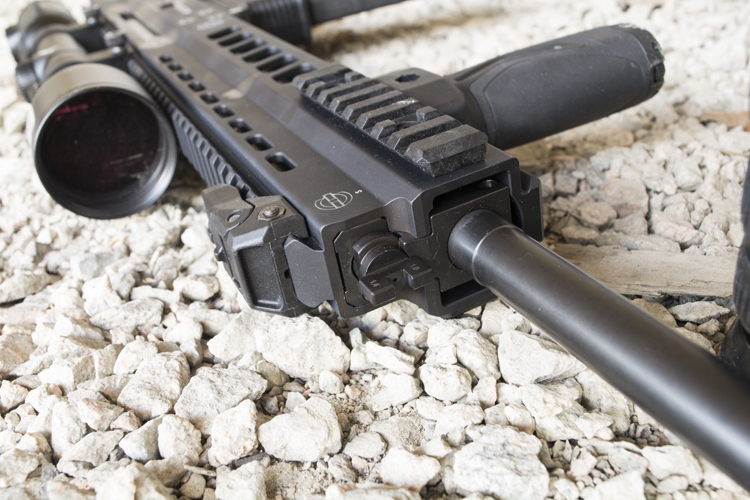 Also of note is the 20 round group we fired with plain-jain Freedom Bucket ammo.  With four sadly neutered Pmags, we drilled out a bullseye just to see the patter than would develop when steadily shooting plinker ammo.  The end result was a 2.57 MOA group and again, that’s really pretty decent.  The unvalidated claims we often hear of half-MOA performance from rack-grade rifles are…well, unvalidated.  But we have generated our numbers with a skilled, but human, shooter, and they aren’t nearly as far out of line for a quality service rifle as many might expect. 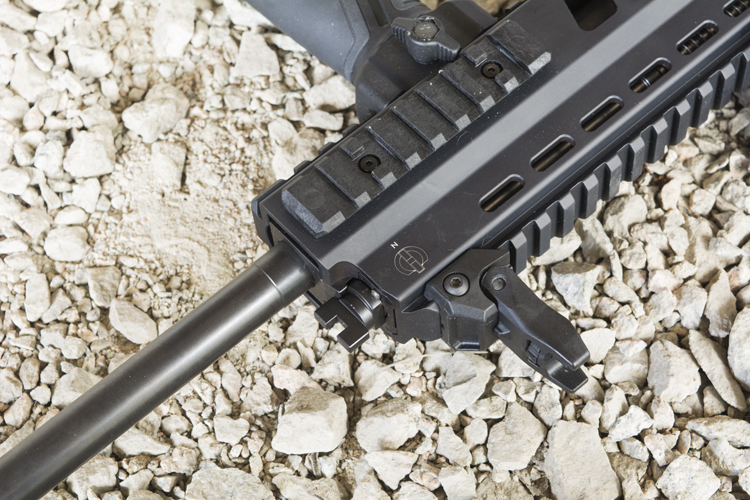 One surprise in store for us, however, was the finish on the bolt carrier surrounding the cam pin cutout.  The finish in this area appeared to be flaking away.  We can’t discern if this is the result of deformation of the metal or a quirk of the manufacturing; word from the manufacturer is that it’s not indicative of an issue, but we were a little surprised to discover it on a rifle retailing for $3900 plus taxes et cetera. 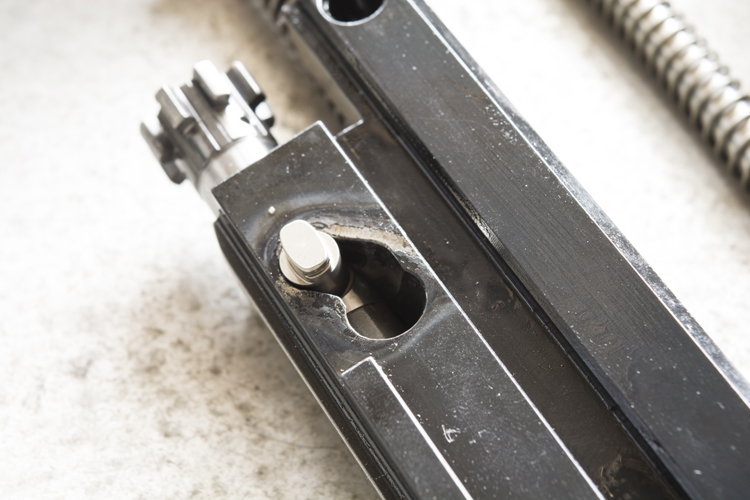 In the end, the question always boils down to this: is it worth it?  Well, it’s a beautiful piece of machinery.  It’s equivalent in accuracy to most non-specialized, high quality AR-15s, and we found it to be very easy to shoot, and it drew a crowd every time we took it out of its case.  There’s a premium on all non-restricted rifles and this is one of the best you’ll ever see.  But it’s on the heavy side, although its slimness makes it pretty packable.

It’s a judgement call but if you can afford it, go for it!  If there’s a more exotic service rifle you can rely on, we’ve never seen it.