Hidden deep within the confines of the Calibunker there lies a terrible secret.  A secret so dark and so evil that until this very issue no one dared mention, let alone publish, the awful truth.  But like the phantom heartbeat of Poe’s murdered man, thudding ever more loudly in the mind of his killer and driving him to confess, so too this secret has slowly driven us mad, and only through this unburdening may we even tenuously grip the sanity we profess once to have held.

Of course, if the communist government collapses and you can get a capitalist to refine and market them, well, you get guns like the BRS-99.  And that’s good for everybody.

The BRS-99 is a semi-automatic rendition of the Polish PM-06 submachinegun from Fabryka Broni “Łucznik” – Radom, variously known as FB Radom, Fabryka Broni, Radom, or just FB, which was itself a revision of the 1980s “commie uzi,” the PM-84 Glauberyt.  It’s an interesting approach to the same problem the legendary Israeli blowback machine was designed to solve, and even in its earliest format the PM-84 was definitely a step forward from the much more famous UZI.

In fact, though it was designed in 1981 and adopted in 1984, the lineage goes back nearly as far as the UZI; its predecessor is the spectacularly quirky FB-63 RAK, a 9x18mm submachinegun issued to tank crews and other rear echelon troops, as well as some police units.  The RAK, short for Ręczny Automat Komandosów, or “commando’s hand-held automatic” turned up in a lot of eastern-bloc countries (mostly in the the hands of police forces rather than military units) and in the hands of various terrorist groups, but perhaps most interestingly was knocked of by the Chinese who built an unlicensed version called the Type 82, patterned directly off a PM-63 captured on the battlefield in Vietnam. 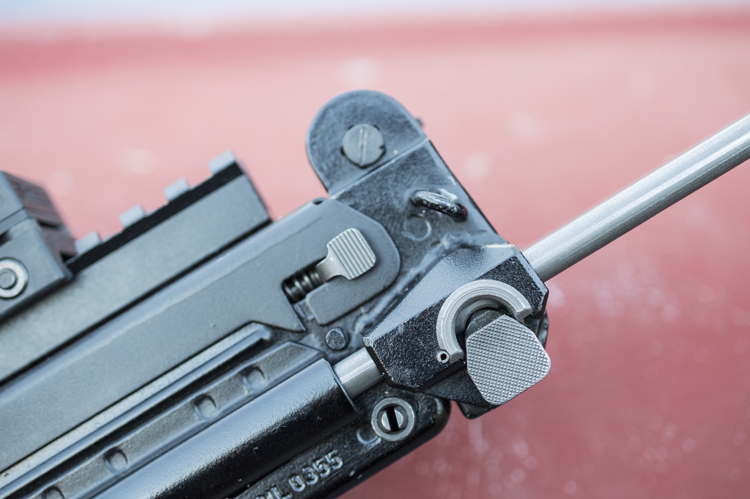 Despite its service history, the RAK had some fairly substantial deficiencies as far as durability was concerned, and the external slide was seen as a liability, so in 1981 Radom sharpened their pencils and got to work on a new design, which, when complete, retained little more than the chambering, the telescoping stock concept, the boxy grip and the folding fore-grip of its predecessor; ironically some of the RAK’s less well-executed features.

The new machine, however, was indeed quite a different animal.  A direct blowback action clearly taking design cues from the highly successful Israeli UZI submachinegun, the new gun was designated the PM-84 Glauberyt, which, after several minor revisions and one major revision to the balance of world power and the complete upending of the communist universe, arrived on the civilian market as the BRS-99.

This new design offered many of the same advantages of the Uzi, notably low manufacturing costs and robust, durable components.  But the Glauberyt was no mere copy: rather unusually for a select-fire blowback submachinegun, the gun fired from a closed bolt position.  This was a significant improvement over its famous cousin as the closed bolt operating system meant that the trigger press no longer unleashed a large, heavy bolt, driven by enough spring pressure to offset the ignition impulse and shaking the gun right at the moment of firing.  The BRS-99, consequently, is much easier to fire accurately than its Israeli inspiration. 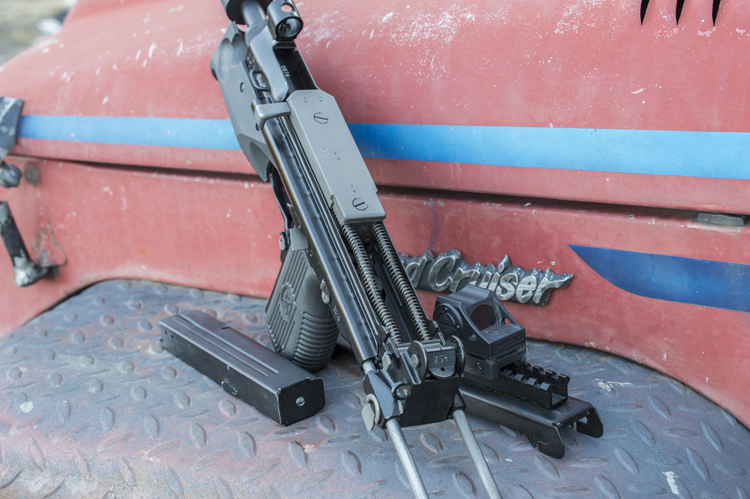 The other great advantage over the open bolt Uzi is the PM’s reduced vulnerability to dirt and sand.  By defaulting to a closed position, the chamber was far less susceptible to intrusion of debris and thus more reliable.  The design found favour with the Polish government, and was adopted by Polish security forces in 1984, thus the now-familiar PM-84 designation.  Between the various services, roughly 50,000 units were issued in its country of manufacture, but use outside of Poland remained limited.

Following the Polish Revolution of 1989, Radom was free to deal with the capitalist running dogs of the west, and the ’84 was quickly reworked into the PM-84P to fit the more powerful 9mm NATO cartridge in the hopes of generating export sales, but with a few exceptions, the product languished in obscurity.  The next major revision was in 1998, when the gun was substantially updated with a familiar, thumb-activated magazine release, a new and stronger receiver, a better stock, and a larger trigger guard.  This rendition attracted more interest and both Indonesia and the Philippines placed orders for their national police forces; the PM-98 was essentially a complete design.  The subsequent revision, the PM-06, was little more than a trim package but revealed a gun basically identical to the BRS-99 now available, although the ‘06 was still exclusively a select-fire machine.  The see through picatinny-type optic rail and 3-position straight-pull stock featured on the BRS-99 came from the PM-06, as did the hooded front sight. 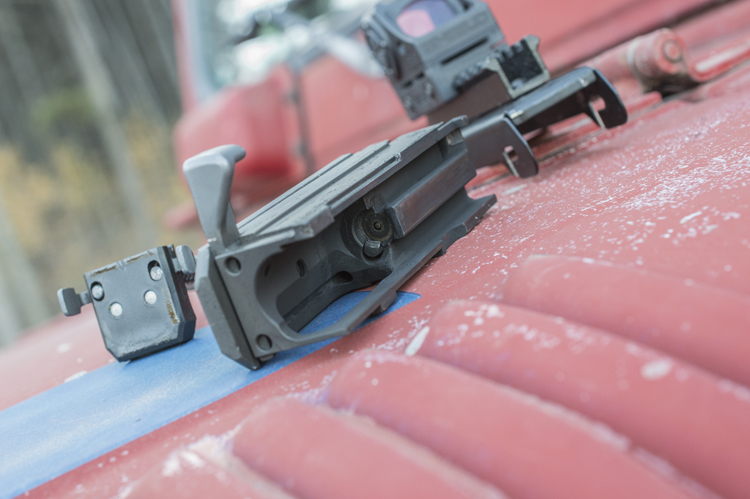 The BRS-99 also benefited from an improved bolt release, which went from awkward on the original ’84 to excellent on the ‘99.  This change allowed users to take advantage of the PM-84’s other obvious advantage over the Uzi: a bolt hold-open which locks the action open when the magazine is empty.   Unlike the overwhelming majority of blowback submachineguns, the BRS-99 can be run dry, reloaded, and then made ready without having to rack the action, but the original bolt release was difficult to operate smoothly.  The revised edition placed it in a perfect, instinctive location for anyone with handgun experience, and in combination with the fairly slippery magazines, it became a fast gun to reload despite the boxy magazines and flat magazine well. 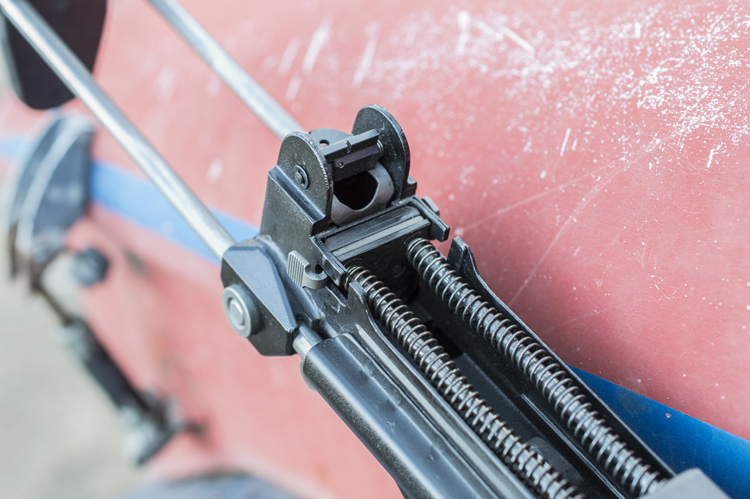 The only really unfortunate design feature left on the BRS-99 is the grip, which is a bit of a mystery.  Stylistically it’s a throwback to the PM-63 RAK, and the shape looks as though it’s going to be pretty comfortable, but it’s massive.  Large-framed Glocks are similar in size front-to-back, but the BRS-99 is wider.  Only the truly freak-thumbed would be able to operate the magazine release from with their right hand without pivoting the gun substantially.  Granted, many shooters use their off-side thumb to hit magazine releases anyway, but the grip is outlandishly huge and it’s something everyone notices when they first pick up the gun.  On the other hand, we didn’t find it to intrude too much into the shooting experience, so it’s hardly an insurmountable issue.

We took the BRS-99 to the range with the initially kooky-sounding 18.9” barrel.  Why the long barrel?  Well, as a semi-automatic carbine, as long as it meets length requirements and isn’t restricted by name, this is a non-restricted gun.  The barrel swap takes seconds, although if you buy both and change the non-restricted barrel out for the restricted length one, you’ve got a bit of a legal conundrum on your hands.  If you purchased it as a non-restricted firearm, you’d have to register it to install short barrel; a bit annoying given the ease with which barrel swaps can be performed.  We opted to stick with the non-restricted version (made aesthetically more pleasing by the barrel shroud, which looks exactly like a suppressor but doesn’t do anything). 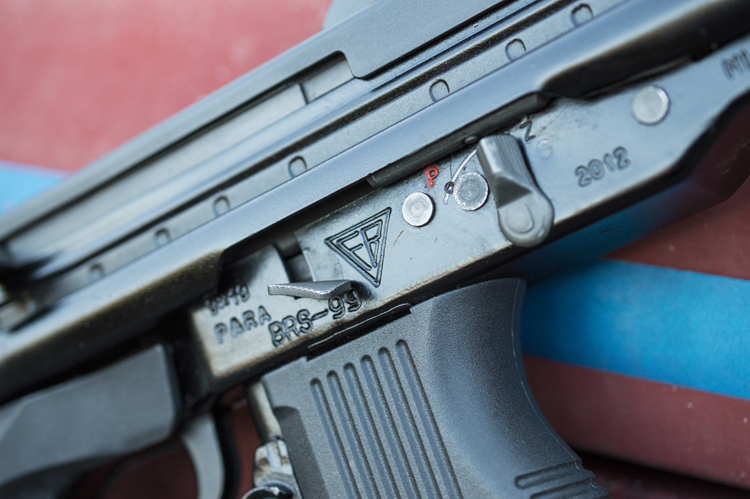 The immediate realization at the range was that magazine capacity laws are a crime against this gun.  Since it was imported as a carbine to get the non-restricted status, and there’s no commonly available pistol version, the magazines are pinned to five rounds.  That’s cruel and unusual.  This is a really fun gun to shoot and although we’ve said it before about a dozen other guns, it’s never been more painfully obvious just how much of a blast it would would be if we could have the full 25 round stick magazines, or even the flush-fitting 15 rounders.

Still, the gun runs reliably and shoots with really surprising accuracy.  The barrel attachment system is just a toothed, knurled nut that slides over the muzzle and interfaces with a push-button detent on the receiver.  A flange on the barrel prevents it from rotating in place, but it’s such a simple arrangement that we expected a pretty ugly spread at 50 yards.  That wasn’t the case at all, and in fact the BRS-99 consistently put cheap 9mm into groups under three inches.  It’s not target rifle accuracy, but this is a submachinegun which, outwardly at least, appears pretty crude. 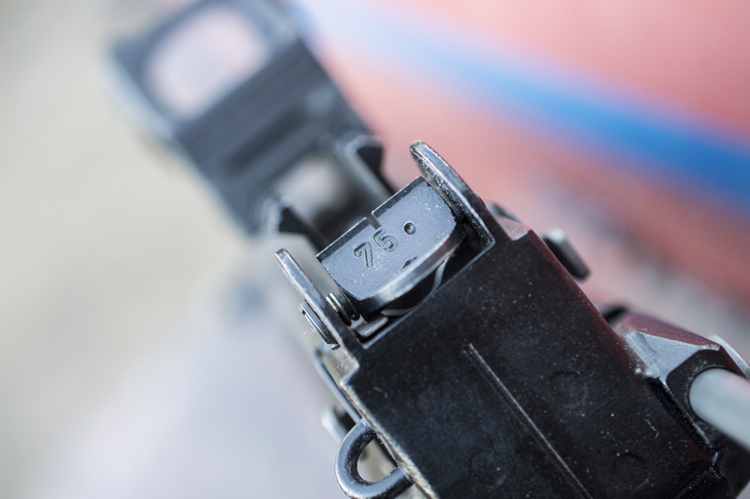 The finish is pretty typical for eastern bloc gear, with its thickly painted stamped steel everything and clunky exterior…but some clues as to the source of the accuracy can be found during the field strip.  This is simply a well-built gun.  The bolt is a thing of subtle beauty, with its machined-in ejection port; like the Uzi (and the other classic red mini blaster, the Skorpion) the bolt wraps around the barrel so in order to reduce the necessary travel, the bolt itself has a large window milled into it to spit the brass through.  It’s nicely finished on all the important surfaces and and as such, the action (though a little heavy as all blowback guns tend to be) is very smooth.

The trigger is also quite good, with a relatively short pull and break that, by stamped steel for the revolutionary masses standards, is really clean.  The stock works well and although the cheek weld is, obviously, a little vague, it’s just extremely easy to put rounds on target with this gun.  For shooting steel targets on a medium-sized range this gun would be an absolute joy.

Field stripping is simple and somewhat reminiscent of an AK-47; a pair of buttons at the back end and the dust cover comes off, revealing a pair of recoil springs and the aforementioned bolt.  The parts pop out without difficulty and everything goes together in a matter of seconds.  A bit of grease on the contact surfaces and this little tank should be doing its job for as long as you can fill the magazines.

A Machine out of Time 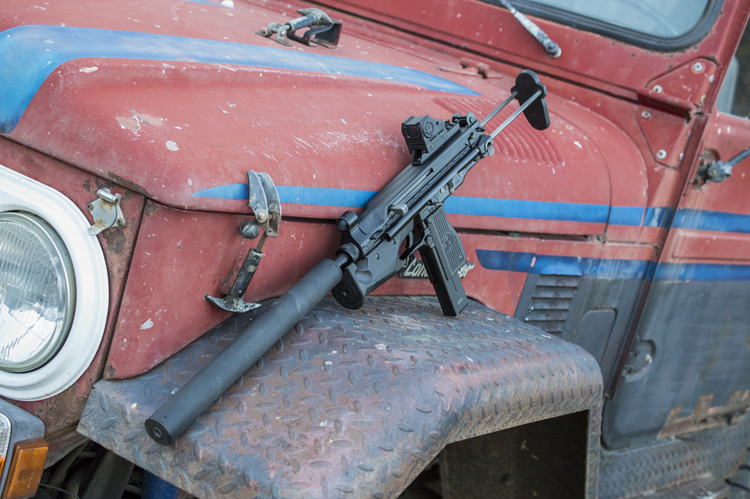 The BRS-99 is one of the great unsung pistol calibre carbines of the world.  It came too late, and the Soviets, never very interested in promoting the works of the countries they’d subjugated, didn’t adopt it from the Poles or promote it internally to other Warsaw Pact countries.  Much like the Czech Vz. 58, it was an advancement that received widespread use in its homeland and remained virtually unknown in the outside world.  With the collapse of the Soviet Union, the Glauberyt family of guns could be marketed to the world, but they arrived when western markets had already committed to other platforms.  Most of the countries who wanted Uzis had already bought them; countries looking to spend more were invested in the Heckler & Koch lines.  Updates to the gun brought it closer and closer to the standards expected in western Europe, but the final rendition of the gun made it to market just in time for countries to begin shifting away from pistol calibre carbines as law enforcement guns. 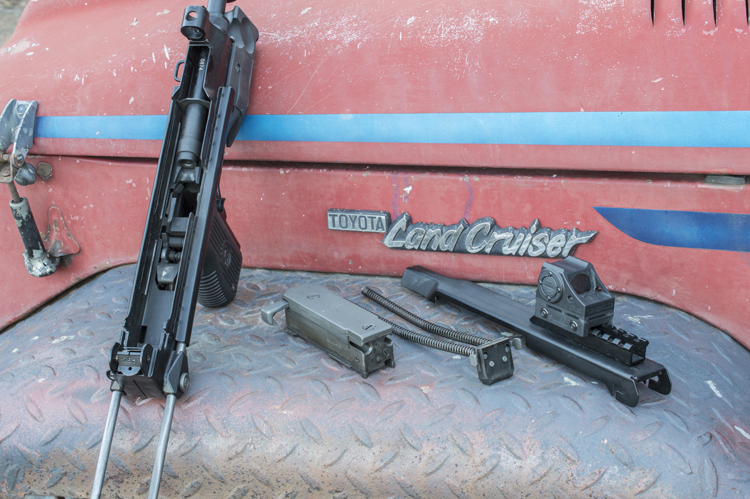 The obscurity of the PM-06/BRS-99 is an unfortunate oversight by the rest of the world, and even if agencies have moved into 5.56mm NATO carbines as a whole, there’s no reason for Canadian sport shooters to ignore it the same way.  If you’d like an Uzi in Canada, this is as close as you’ll get, and it does have legitimate design connection to the Israeli legend.  But, much as one might expect from a much newer design, itself refined regularly throughout it’s lifetime, the BRS-99 is a genuine improvement.

Even with five round magazines, this is a really easy gun to enjoy.