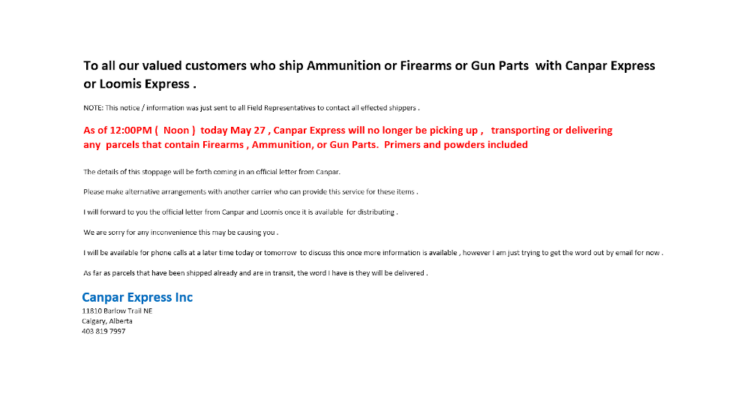 Several major Canadian firearms retailers say Canpar has told them it will no longer ship firearms or ammunition. A call from Calibre to the company’s customer service line has confirmed this.

News of the change came out earlier today (Thursday, May 27), when Marstar, Wolverine and O’Dell reported Canpar wouldn’t pick up their outgoing shipments. As per O’Dell’s Facebook page:

As of today CanPar decided to unilaterally and without warning cease to ship firearms, ammunition, parts, and accessories for us. Our regular driver who has known us for many years was shell shocked. He received a “DO NOT pick up at O’Dell” text shortly after we received our phone call so someone had some advanced planning in this, even if no one outside their management was aware. The initial reaction from our CanPar rep was basically “sucks to be you”. Nice response after a seven figure sales relationship.

This will be a significant short term blow to the safest, most honest, and law abiding of Canadians. I am quite certain it will be a much larger long term loss for CanPar. It will look good on them.
Please bear with us while we sort out alternate arrangements and feel free to – politely – contact our sales reps and office if you have questions. We didn’t do this but we will make sure CanPar knows what they did.
We apologize to all of you that will be put out by this in the short term but we will get it sorted out.

Canpar courier services has as of today ceased all interactions and services for parcels containing firearms, firearm parts, or ammunition. Due to this our current Flat Rate shipping fee for ammunition has been suspended, for quotes please contact our sales team , alternatively our website will give you an accurate cost through Purolator.

The next time you go to ship something and need a courier, remember who supports who!
We will update our shipping services as soon as we have some alternative options.

Marstar posted similar details elsewhere. So what’s up? According a Canpar customer service rep, the company’s foot soldiers got an email this morning saying “Guns and ammunition will no longer move through our systems.” He was very regretful about the announcement, and said he hoped it would not be a lasting situation. It seems the announcement was as much a surprise to Canpar’s grunts as it was to firearms retailers.

Note that, in Wolverine’s Facebook post, the company said their flat rate for ammunition has been suspended. No doubt we’ll see similar moves from other firearms retailers. It’s also likely that firearms enthusiasts across Canada will be moving their business away from Canpar (more on that below), but it’s hard to say the long-term results of the move.
Also note that this seems to be the way that big business is headed in Canada, with more and more stories of firearms businesses also getting hassled in their dealings with financial institutions.

Longtime readers might now that Calibre has long done business with Canpar, to support the company in turn for its helpfulness to the shooting community. See Dan’s response to Canpar’s move below.