Is the greatest tactical bipod in the world…Canadian?

Sometimes companies send us gear and our first reaction is skepticism.  But fairly often they win us over, and in the end, we decide the product is pretty decent.  That’s not what happened here, though.  With the BLK LBL bipod, we started off skeptical, and ended up thinking that this might actually be the best bipod anywhere, period.

BLK LBL is all about efficiency.  In addition to deleting all the vowels from their name, they’ve also eliminated the need for the awkward adapters that bipods always seem to require.  A fully integrated rail/bipod solution, the BLK LBL is the lowest profile system we’ve ever seen, and unlike some of the factory integrated bipod solutions, a la Swiss Arms, the BLK LBL has a unique ball-socket interface between the rail and the legs of the bipod, allowing it to pan up to about fifteen degrees and tilt to forty, smoothly, in any direction or combination of directions. 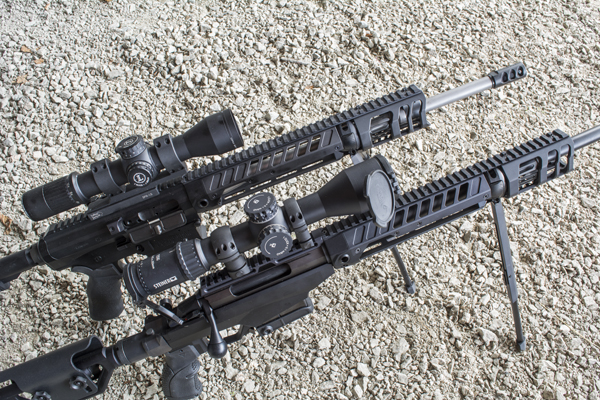 The legs are individually, incrementally, adjustable from six and a half inches up to nine and a half, and seat firmly into their positions with a simple pushbutton lock. The feet are grippy and the bipod will hold a very solid position as you lean into the gun to pin it down, with no indication that anything will give way under load.  The locking mechanism that keeps the legs in their open position is similarly robust and we were unable to jar the legs closed either during normal firing or during what we’ll call our “abusive handling test.”  The entire system is simple and durable, with few moving parts and quality manufacturing throughout. 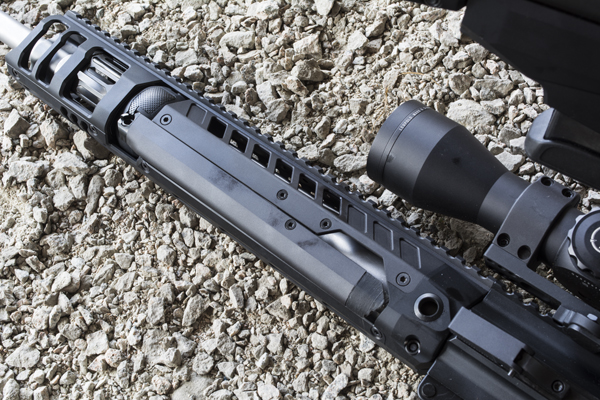 When the legs are folded in, they’re basically imperceptible, sitting flush within the rail system itself.  So not only are there no mounts to break or adapters to adjust, there’s also no legs to snag on anything.  For a pure target rifle, this might not seem like a big deal but for a field rifle?  It’s a huge improvement.  Besides which, the placement of the ball and socket joint around the barrel instead of below it makes for an extremely stable platform.  It’s just a very well-thought out design.

Rails are available in AR15 and AR10 patterns, which covers virtually all of the tactical segment these days, but bolt gun-specific models are rumoured to be on the way, so keep your eyes peeled for that.  In the meantime, we went to town on a pair of rifles: the ATRS Modern Hunter and the Tikka T3X TAC A1, both of which were fitted out with BLK LBL bipods and if there’s one thing we’re sure of, it’s that this system works.  The specs are all there: everything structural is 7075; everything that can be lightened with 6061 has been.  Steel parts are nitrided 416 stainless steel.  By the time we started shooting we were hooked. 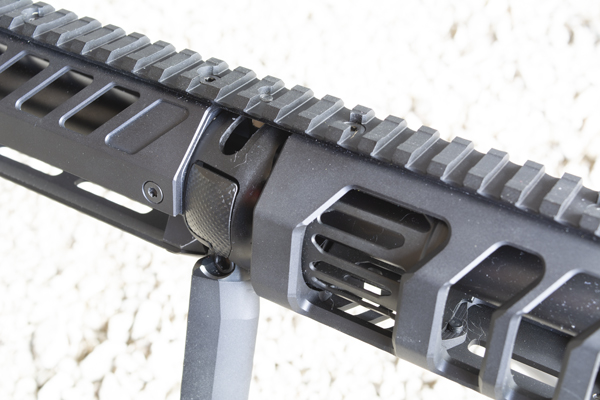 Granted, there are a couple of downsides: if your goal is unlimited modularity, well, this isn’t as modular as a universal rail with a conventional bipod bolted on.  Of course, it’s also not as heavy as a bolted together setup.  You can’t just remove the bipod, so your rail will always have a lower surface that’s a little more flexible than just a straight up rail, if that matters to you.  It’s also not cheap, at $745 a throw for either model, but then if you add up the combined prices of a standard rail and bipod, you can reach that same figure pretty quickly.

You’re currently limited to a 14” or 16” rail length in either AR10 or AR15 platforms, at a weight of 735 grams, or 26 ounces. which is not exactly light, but on the other hand, puts the BLK LBL at a near-identical price and weight to a similarly sized quad rail and conventional bipod.  The increasingly popular slick forends are a little lighter, of course, but in general the weight penalty of this system looks to be no more than about 6 ounces, or 175 grams. 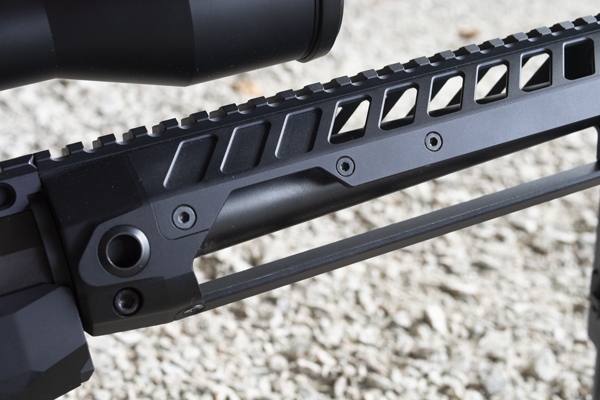 The only other caveat is that when the bipod is extended, you’re exposing the underside of the barrel, so don’t go doing mag dumps and then grabbing the damn thing.  We realize this is the equivalent of saying “don’t drive with your eyes closed” or “battery acid is not intended for human consumption” but if we don’t say something, we’ll get angry letters from somebody.  This ain’t our first rodeo.

The bottom line here is that we don’t think there’s a better way to do bipods than this, and if you want a bipod built for the field, this is your huckleberry.