If you want to pick a fight, tell a hunter they’re using the wrong cartridge. A .243 Win for elk, are you nuts? A .300 Win Mag for deer?! There’ll be no meat left to take home to your family. The list of condemnations goes on and on. Now let’s really stir things up: can varmint cartridges—the ones typically used to shoot coyotes—ethically kill a big game animal? The answer to this question is complex. Let’s penetrate deeply into this topic of rifle cartridges and big game.

Minimum Cartridges from Coast to Coast

Firearms and ammunition laws for hunting big game vary across the country. Zoning around metropolitan areas may further restrict the use of some firearms. Each year, hunters consult the provincial hunting guides to ensure we’re complying with the current laws.

Some jurisdictions assume a common-sense approach, allowing hunters full freedom to select a cartridge and bullet matched to their quarry. Others are more specific—listing calibres, cartridge lengths, bullet weights, kinetic energy or a combination of these to give hunters a framework.

Across Canada, four jurisdictions do not specify a minimum cartridge size; four jurisdictions use 6mm as a minimum; and three other provinces state the minimum as “larger than .23 calibre” (essentially 6mm). Nunavut allows certain .22 calibre centrefire cartridges for all big game while Labrador permits .22 calibre cartridges for caribou if the muzzle energy is greater than 1500 foot-pounds. Saskatchewan’s current minimum calibre laws are the most complicated (see table for details).

If you are considering a smaller calibre cartridge, research its ballistics to ensure an ethical kill.  Bullet construction, weight and velocity as the bullet exits the muzzle are all variables that matter for your decision. The following table is a summary of laws for centrefire rifles across the country:

* summary of regulations for centrefire rifles only. Other regulation cover muzzleloaders and shotguns for big game

Why Shoot ‘Small’ at All?

Many first-time hunters are outfitted with a rifle chambered in a cartridge with lower recoil. After all, expecting a newbie to shoot a magnum cartridge is unfair. In the excitement of the hunt we seldom feel the recoil, but a new hunter needs time at the range before the season, to practice shooting from various positions. Recoil experienced at the range can translate into a flinch in a hurry. Factory rifles for youth and smaller adults include shorter stocks for a better fit and thinner/shorter barrel for less weight in the field. It’s basic physics; light weight rifles have more felt recoil than heavier ones. To lessen recoil’s sting, compact rifles are limited to smaller cartridges such as .223 Rem, .243 Win, 7mm-08 Rem and 308 Win.

Likewise, recoil-sensitive hunters may choose a softer-shooting rifle in one of these chamberings. Another option is to add recoil dampening features like an upgraded recoil pad, a muzzle break or toss that cheap plastic stock that came with the rifle and add an aftermarket wood or fiberglass stock. The added weight reduces recoil. Online recoil calculators help estimate the felt recoil in a given rifle.

What do the Pros Suggest?

Some outfitters recommend .270 calibre is the minimum for big game hunting. Others assume hunters will bring a rifle with enough kinetic energy to quickly anchor an animal. Regardless of the calibre, to be ethical and fair an outfitter may have a policy stating that after a hunter has shot at an animal, the hunt is over…unless it is obvious that the animal wasn’t wounded. If you’re on the hunt of a lifetime, the last thing you want is to wound an animal and not find it—calibre, bullet construction and weight, and shot placement are important factors.

Within reason, a well-placed shot is more important than the calibre used. A hit to the heart-lungs of any big game animal will kill it. But the bullet needs penetrate through hair, hide and often bone to get to the vitals. That bullet needs to be up to the task.

Head and spine shots drop animals quickly but are hard to guarantee. Most ungulates constantly move their heads around looking and listening for danger—the brain of a deer is about the size of a baseball!

Good marksmanship comes from practicing field shooting positions. Shots at big game vary from up close in dense cover to longer shots across a valley. Wind affects a bullet’s flight so a good marksman must account for it to make the shot.

Smaller cartridges—22 calibre, for example—may be loaded for varmint hunting, target shooting or game animals. A frangible varmint bullet from a .223 Rem will break apart if it hits large shoulder bones. A bullet that doesn’t reach the vitals will not kill an animal quickly…if at all!

Full metal jacketed bullets are prohibited in most jurisdictions for big game hunting because they do not create a large enough wound cavity for a quick kill. These bullets are used for target shooting and sometimes for varmint hunting to minimize fur damage.

Students are instructed in Hunter Education courses to strive for a one-shot kill. To achieve this high ethical standard, hunters can follow a few basic guidelines.

Hunting is unscripted and that’s part of its excitement…the elk that appears across the valley, the pronghorn on the wind-swept prairie, or a whitetail buck in a forest meadow. The terrain, weather, hunter’s skill and species all play into the choice of cartridge and bullet.

Last year Saskatchewan changed its minimum cartridge requirements (it was .23 calibre) to include several cartridges under .23 calibre. The Saskatchewan Ministry of Environment explained the changes were brought about by improved bullet technology. Despite the legal changes, they still recommend calibres greater than .23 be used for larger big game such as elk, moose or bear. The hunters I spoke with have mixed reactions to these changes. Most believe it’s a bad move and worry about novice hunters wounding and losing animals. I know of others that successfully harvested deer with a centrefire .22 calibre rifle (such as a .22-250) this fall. 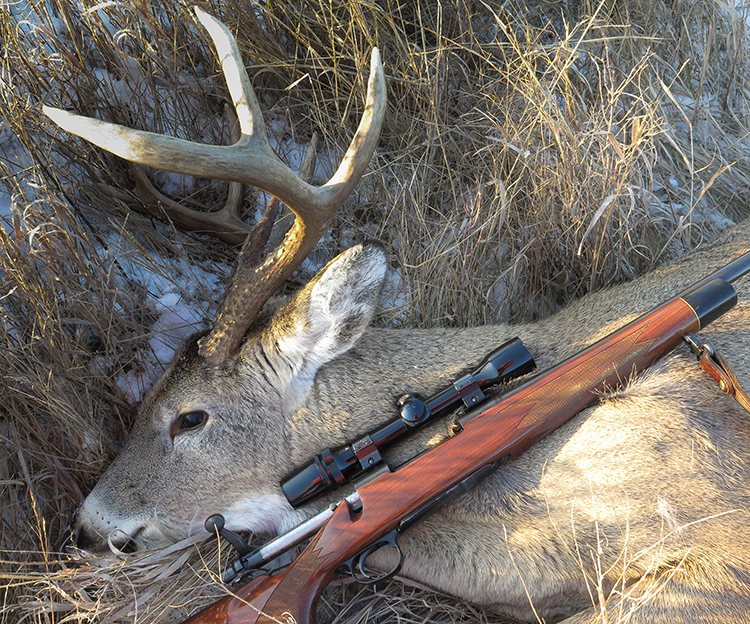 There are pros and cons at both ends of the spectrum. Smaller cartridges have light recoil and are chambered in compact rifles. On the downside, lighter bullets have reduced terminal impacts, requiring ideal bullet placement to be effective. A consensus among hunters is that lighter calibres are best suited for skilled shooters and even then, only at close range.

Hard-hitting calibres, on the other hand, are difficult to shoot, have increased recoil and are often mounted on heavier platforms. This might not be a problem for seasoned shooters and hunters but could make life difficult for those new to the game.

Average hunters will find the most success in a happy middle ground, balancing bullet energy and felt recoil. Most importantly, we all need to practice in the offseason to ensure a well-placed shot on our next hunt. And the next time someone gives you a hard time for the rifle cartridge you’re hunting with, tell them it’s the right one for you.