In the early days of World War I, German troops were in need of a weapon better capable of handling the unique and new confines of trench warfare. Having armed an army for pitched battles across open terrain, the excellent German Mauser rifles were proving too unwieldy in the narrow trenches, and the Lugers and C96 Mauser pistols were simply not powerful enough for troops looking to rout an enemy fighting position. While US troops turned to the reliable and established Winchester 1897, or “trench gun” as it became known, the German Rifle Testing Commission looked in a slightly different direction: Fully automatic fire. Initially testing fully automatic variants of the Luger pistol, the German Rifle Testing Commission found the incredibly high cyclic rate (1,200 rounds per minute) combined with the pistol’s light weight made for a largely uncontrollable firearm, and deemed any further research into a machine pistol to be useless. 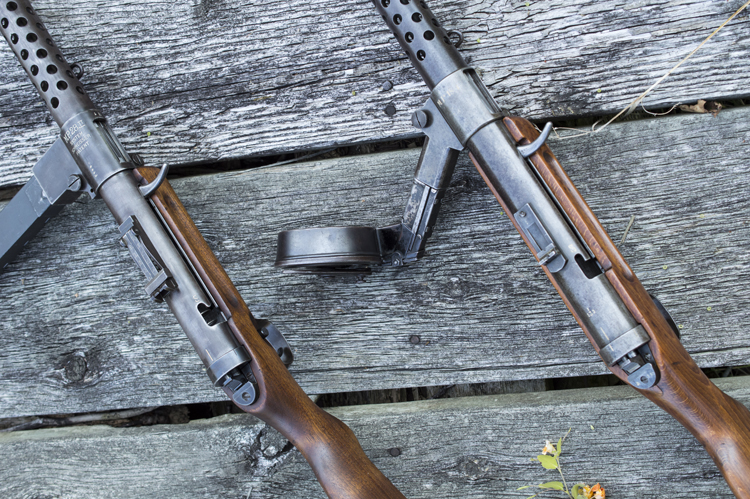 Concurrently, an engineer named Hugo Schmeisser, who had previously been working on the design of simple, blowback-operated semiautomatic pistols for his employer, Theodore Bergmann, was finalizing work on his most groundbreaking design. This design was of a firearm that married the fully automatic fire of a machine gun, with the compact firepower of a pistol cartridge, all contained in a conventional rifle-esque layout. This gun, eventually adopted by the German military and brought into service in 1918 would become the world’s first submachine gun: The Bergmann Maschinenpistole 18, or Bergmann MP 18. 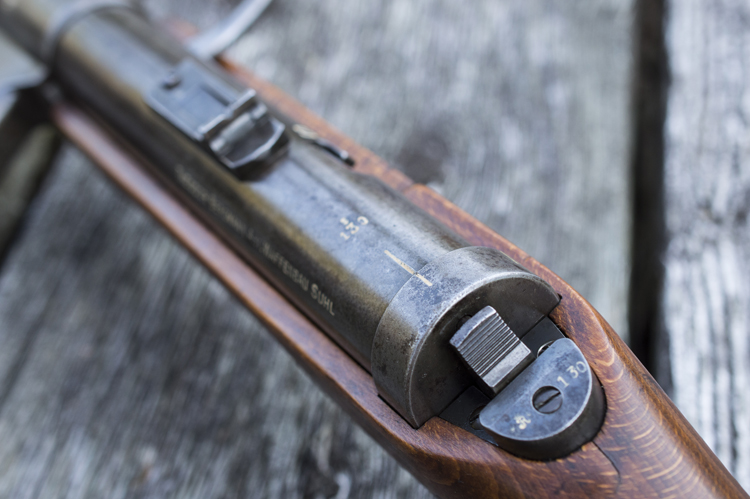 Like the Bergmann-Bayard pistols he was familiar with, Schmeisser built his new firearm around the simple blowback system he knew so well, recognizing that such a system would allow for a much more controllable fire rate as well as ruggedly reliable operation. By definition, blowback firearms have no locking mechanism, and simply rely on the bolt’s inertia to keep the firearm in battery during firing. As a result, they have very few moving components, and are both very reliable and easily serviced in the field.

And so it was with the Bergmann MP 18. Constructed from a simple tubular receiver, the MP 18’s action is driven by a surprisingly small recoil spring, which nests inside a striker assembly that itself slides into the heavy bolt. Firing from the open-bolt position, the bolt is retained by a simple sear mechanism actuated by a parallel bar under the receiver, which in turn is moved fore and aft by the trigger’s movement. There is no semi-automatic fire function, and so, there are no concessions for a disconnector in the trigger mechanism. Putting the firearm on safe is accomplished by pulling the bolt handle upwards, and capturing it in the safety notch in the receiver, physically preventing it from moving forward. Atop the receiver, a two-position v-notched rear sight was fitted, which flipped between 100 and 200 metres. With the exception of the separate striker component, which could have been replaced by a fixed firing pin on the bolt face, this is simplicity defined. 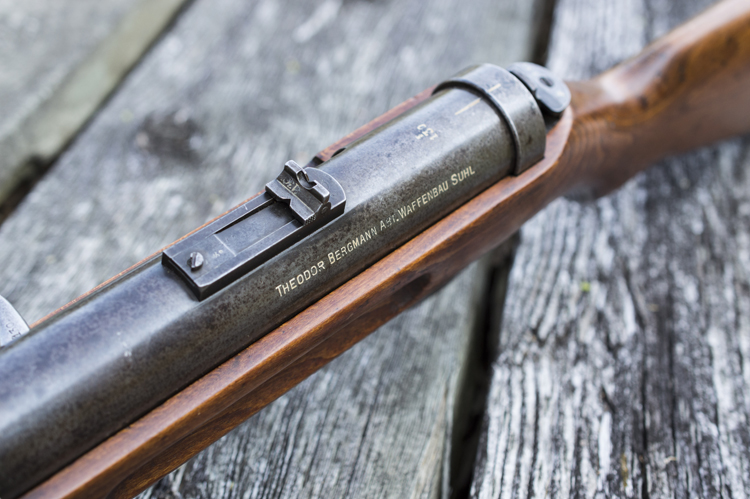 However, much of the brilliance Schmeisser displayed in designing such a simple but effective firearms was undone by one criteria foisted upon the Bergmann MP 18 by the rifle testing commission: That is accept the 32-round snail drum magazines already in circulation for the Luger pistol. These drums, which are actually more a rotary magazine than an actual drum (the rounds do no stack on each other in multiple windings inside the circumference), provided the military with a quick and easy solution to feeding the gun… but also gave it something of an Achilles heel. 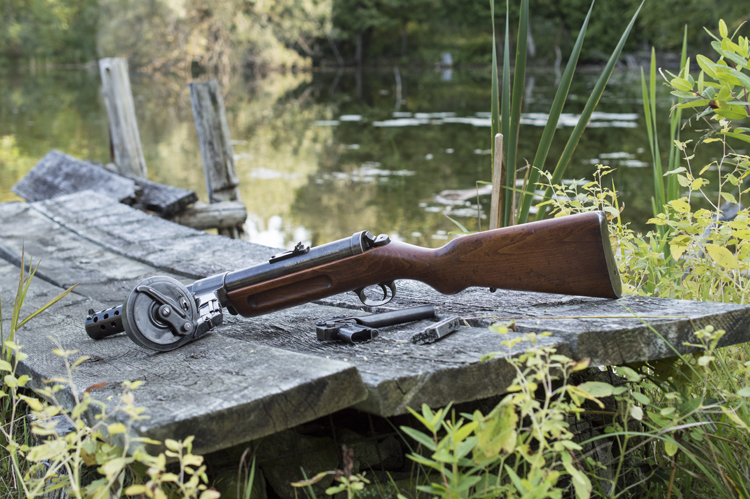 First off, the drum magazines required the magazine well be swept back at the same angle as the Luger’s pistol grip, which did not lend itself to easy loading under pressure. And because it stuck out the side of the gun, the weighty steel magazines did not make the shooter’s job any easier, as they tended to pull the gun down and to the left. Secondly, because the drum magazines were created for use in a pistol, they were designed to bottom out on the bottom of the Luger’s grip. Since the magazine well for the Bergmann MP 18 was much shorter, it was possible to over-insert the magazine (again, common under pressure), and cause the feed lips to foul the bolt, causing a stoppage. To rectify this, the military issued the drum magazines with sleeves to prevent this… but the sleeves were often lost. Finally, there was the issue of actually loading the magazine. Quite complex, the drums came with loading tools and required an armature be extended to relieve spring pressure before loading. Suffice to say, it was quite a process, and number of the components could be made to bound up if it got too dirty, rendering the firearm inoperable. Furthermore, due to the substantial weight of the magazines once loaded, German military doctrine actually incorporated a second man accompany the shooter, just to carry spare magazines. This essentially turned what was supposed to be a fast-handling, fast-moving short-range weapon into something of a crew-served abortion.

The Bergmann MP 18 In Use 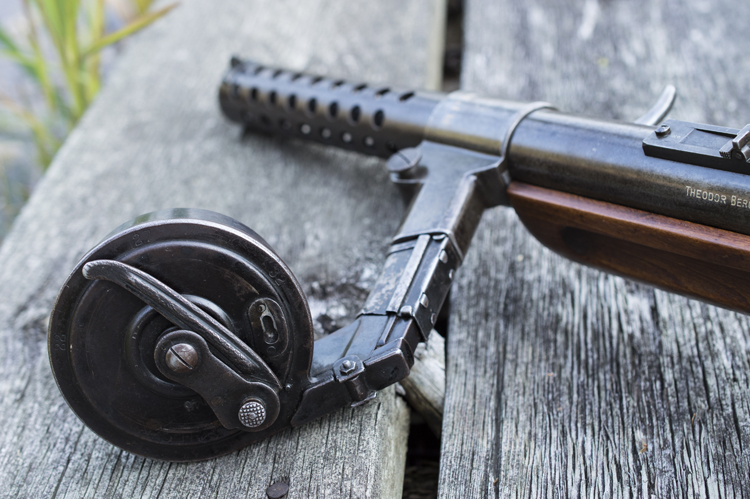 The German military initially ordered 50,000 of MP 18s from Bergmann in late 1917. However, due to the war’s conclusion coming relatively soon thereafter, just over 17,000 MP 18s were actually produced during the conflict before the armistice and its ensuing restrictions on such gun production inside Germany brought Bergmann MP 18 production to a halt. Furthermore, the German army struggled to integrate the MP 18 into their armory; the tactics involved in its effective use being such a departure from the status quo that training doctrine and strategy was a significant barrier to their adoption. Historians estimate that just 3,000 or so MP 18s actually saw combat.

However, the MP 18’s story didn’t end there. With numerous surplus MP 18s and an economy crippled by the costs of German’s defeat, many MP 18s were sold and repurposed as police firearms. In this role, the problematic drum magazine was replaced by a simpler 20-round box magazine, to both increase reliability and reduce the gun’s overall size. Likewise, MP18s seized by French forces at the war’s conclusion, and the French were so keen on their new confiscated submachine guns that they actually developed 20- and 32-round box magazines for it on their own. Additionally, although production of the submachine gun was prohibited by the Treaty of Versailles, Schmeisser continued work on the design under a new employer, C. G. Haenel Waffenfabrik, and licensed the design to the Pieper company in Belgium and none other than SIG, in Switzerland. These manufacturers located outside of Germany developed additional magazines, including a 50-round box, and eventually sold many copies to the Japanese military as the redesignated Type BE. Finally, Schmeisser fitted the gun with a couple significant updates (the most important of which was a fire-selector to allow for semi-automatic fire) and gave birth to the MP 28, ending the era of the MP 18 forever. 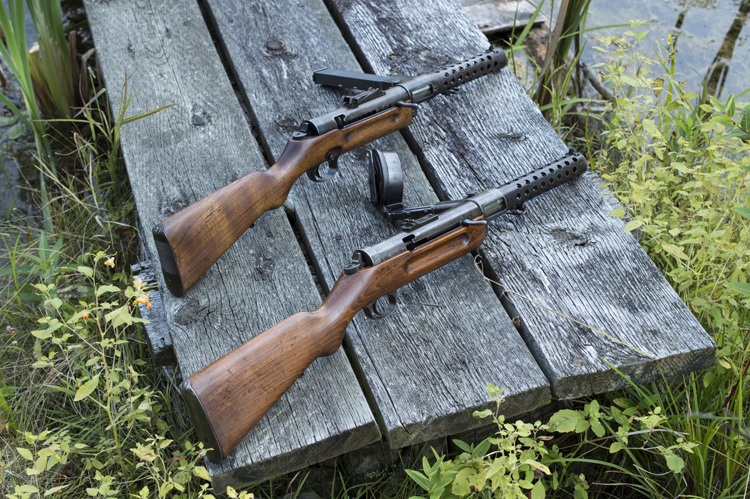 But, as successful as the MP 18 was, it was Schmeisser’s basic idea that has enshrined the Bergmann MP 18’s place in history. Submachine guns and pistol calibre carbines are now so thoroughly entrenched in both military and civilian circles that it’s hard to picture a time when the notion of firing a pistol bullet out of an automatic or semi-automatic carbine would have been revolutionary… which makes Schmeisser’s creation all the more impressive. With nothing to go on, no blueprint to follow, he created a firearm so influential that it would be copied literally dozens of times and oftentimes with as few changes as possible. To have such a piece in the National Historical Arms Museum, in such complete condition, is a very big treat.