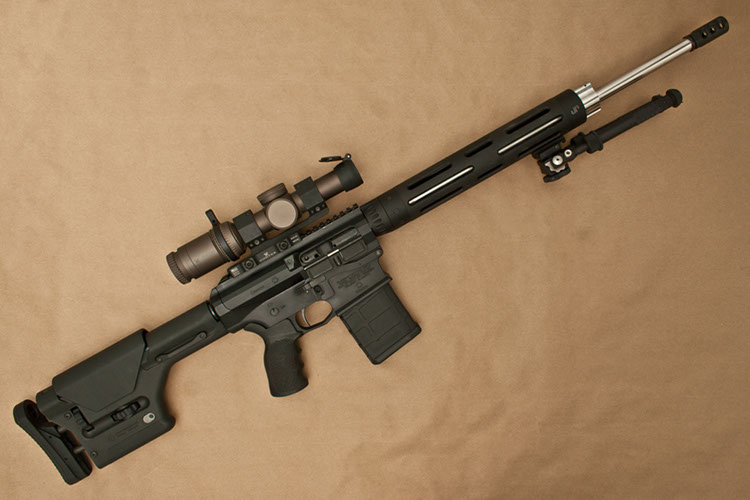 The Modern Hunter is an exceptional rifle from the precision gun shop Alberta Tactical Rifle Supply. Based in Calgary, ATRS started in 1997 and has built a business producing premium AR-15s and long range bolt guns. In 2012, they started tinkering with the idea of designing a direct impingement semi-auto rifle that used features from both their business lines. Three years later, after a variety of concepts and prototypes, they settled on the Modern Hunter.

While at first glance it may well look like an AR-10, but the Modern Hunter has achieved a non-restricted status from the RCMP inspection lab. It is a completely unique rifle without any lineage or compatibility to AR-15 uppers and lowers.

In Canada, all AR-15s are restricted by name. Regardless of barrel length, regardless of name or designation. So any gun that separates into an upper and lower and can be attached to an AR-15 upper or lower is listed as a variant.  The RCMP test lab has a whole range of variables they use to determine a firearm’s classification, but the upper and lower problem is important here specifically. If either component can be convinced or forced to fit the opposite AR-15 component, it will be likely be classified as an AR-15. 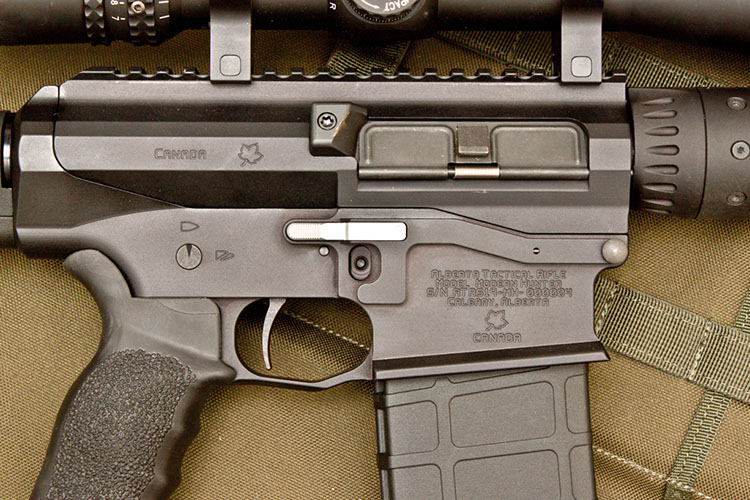 Yes, the Modern Hunter shares some design concepts and even some components with the AR , but one could easily argue that it also shares concepts with the M1 Garand (one bullet after another) and even more with the Brown Bess Musket (making a small piece of lead go very fast in one direction.) The point being that describing one gun as similar to another is a rabbit hole that can easily go in circles. It’s part of the issue we face when Canadian law talks about things like “variants” but fails to define them.

This rifle is magazine fed, uses the direct impingement gas system, and features a rotating locking bolt that recoils on a buffer and spring system. If you described that to a knowledgeable American shooter they’d say you’re talking about an AR-15. 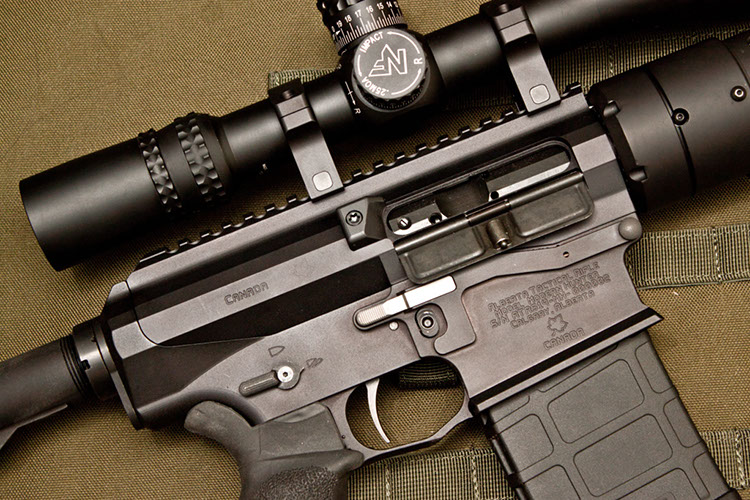 The Modern Hunter is a semi-custom rifle. There isn’t a single style of factory model rolling off the production line, but a selection of different configurations being offered. ATRS offers a wide variety of barrels and furniture to assemble a number of unique builds.

One of the featured options is the Proof Research Carbon Fiber Barrel that replaces ATRS’s match stainless barrel. Proof Research takes a 416R stainless steel barrel blank, then dramatically reduces the profile between the muzzle and the chamber to form an axle shaped length with only a small portion of full profile barrel at each end. Then they wrap the slimmed down center length in a proprietary carbon fiber until its flush with the original profile. The carbon fiber is much lighter than the steel its replacing, and its better at dissipating heat too. This labour intensive process means that the barrels are only offered in 18.6″ and 20″ lengths, while the regular stainless barrels can also be had in 22″ and 24″ lengths with a variety of profiles. 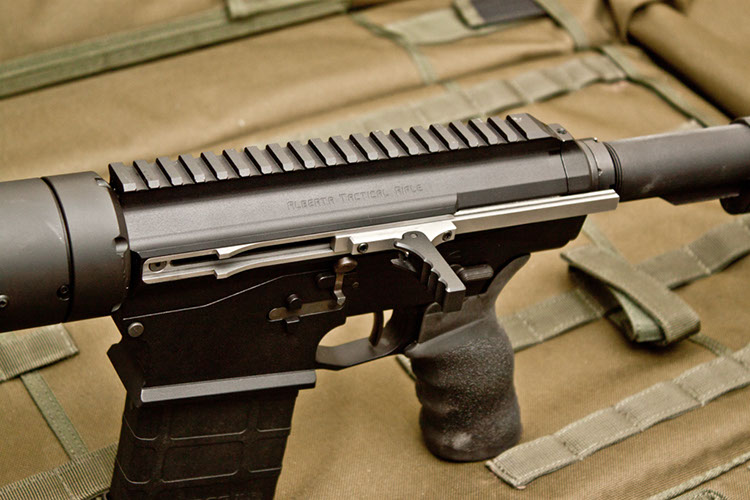 Using the lightest parts configuration, and the 18.6″ carbon fiber barrel, ATRS produced a bare rifle that is just over 8lbs. The heaviest configuration with an extended target barrel and precision stock comes in at 12lbs.

My review rifle had a 20″ stainless barrel, a JP Enterprises hand-guard, a Magpul PRS adjustable stock, an Atlas bipod, and a hefty Nightforce 5-20×50 on top. On the scale it weighed in at a full 14.5lbs. Maybe heavy for an AR, but still manageable for a precision semi-auto rifle.

In field conditions I was shooting groups just under 2MOA with Privi Partisan and Federal Gold Medal, with my best 5 shot group coming from Fiocchi 180grain Exacta at 1.28 MOA. I am confident that an established reloader shooting from bench rest could produce sub-MOA groups after working up a load. 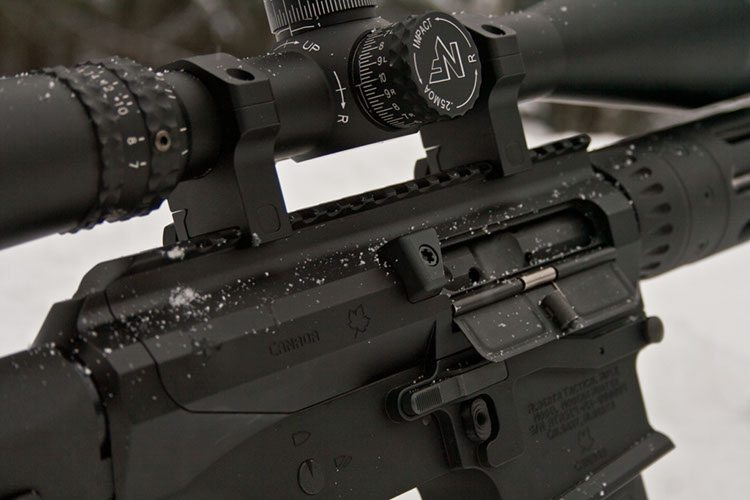 It was Col. Townsend Whelen who first said “only accurate rifles are interesting” and Rick Timmins, the owner and designer at Alberta Tactical Rifle, certainly follows that school of thought. The Canadian market has a number of non-restricted rifles in both .223 and .308 that will easily manage battle rifle accuracy of 2-4 MOA. But rifles that can produce sub-MOA groups out of the box are generally bolt actions, or a restricted AR-15 variant like the SR-25 or MR308. The Modern Hunter offers the best of both worlds. Freedom to own and carry, semi-auto capability, and the accuracy potential to reach out. Parts compatibility is an added bonus. This does come with a premium price-tag. ATRS is a small shop, who’s built their business on producing high end rifles. So the basic configuration of the Modern Hunter starts at $3100, my dream build would cost me $3964, and the maxed out kitchen-sink configuration is $4974 before taxes.

The first run of 75 rifles have already been sold, and are slated to arrive in their owners hands in the first quarter of 2015.  A second and third batch are currently planned for summer and fall, but as a small shop ATRS is currently aiming for under 100 rifles in each production cycle. 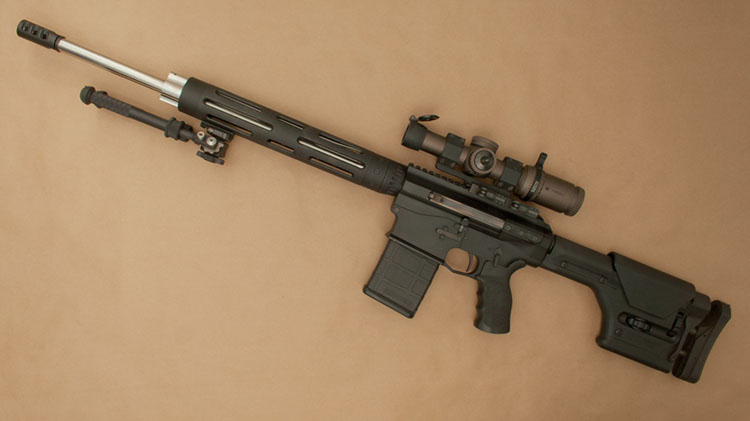 The rifle is built around the .308 cartridge, and the vast majority of the pre-ordered rifles are chambered in the NATO standard. But ATRS does offer some more specialized caliber options based on the same bolt. Shooters can request their Modern Hunter be built in .243 Win, 6.5 Creedmore, 260 Rem, 7mm-08, or .338 Federal.

If you’re looking for chambering closer to the classic AR-15, then you’ll have to wait for the next evolution of the platform. ATRS has confirmed they are already planning a Modern Varminter and a Modern Magnum. Between their history with .223 AR-15 rifles and having already produced the Modern Hunter, a small caliber variant should be a logical step. Likely the longest part of that process will be the RCMP inspection lab’s process of FRT classification. The Modern Magnum however will require up scaling of all their components, and could be another 3 years or more in the making. ATRS builds bolt guns in .50BMG, .408 Cheytac and .338 Lapua, but the Modern Magnum will be a first for them.

Between the visual similarity to an AR-15, and the “no need to register” non-restricted status, the Modern Hunter runs the risk of being misidentified by people who don’t know (or think they know) Canadian firearms law. I have an envelope of paperwork I take with me shooting to explain transport regulations, magazine capacity rulings, and other commonly misunderstood laws. For the Modern Hunter I carried a 7 page inspection report from the RCMP Senior Firearms Technologist to make sure no one I met threw a fit. ATRS plans to ship each rifle with an explanation package that owners can laminate and carry with them to educate Law Enforcement Officers or other shooters.

But how exactly did this rifle qualify as non-restricted? The inspection report is surprisingly detailed.

The RCMP compared the Modern Hunter to an early model AR-10, and a late model Armalite AR-10, and noted where they are similar and where they differ. 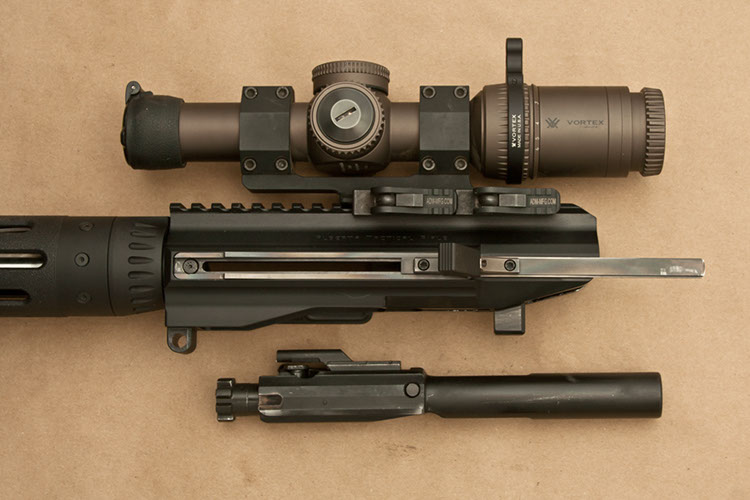 The RCMP notes that the Modern Hunter shares things like the bolt release, magazine release, safety selector, and recoil buffer system. But those things aren’t the deciding factor: uppers and lowers are.

Rather than using an AR-15 hinged design, the Modern Hunter upper mates to a tapered trunnion inside the lower receiver. The upper slides onto the trunnion, and a cross pin up front holds it in place. So rather than punching pins and the upper lifting free, the Modern Hunter requires you to pop the front pin, break the suction on the trunnion, and slide the upper forward and up. It takes a little getting used to, but is still ultimately a quick and easy take down process. 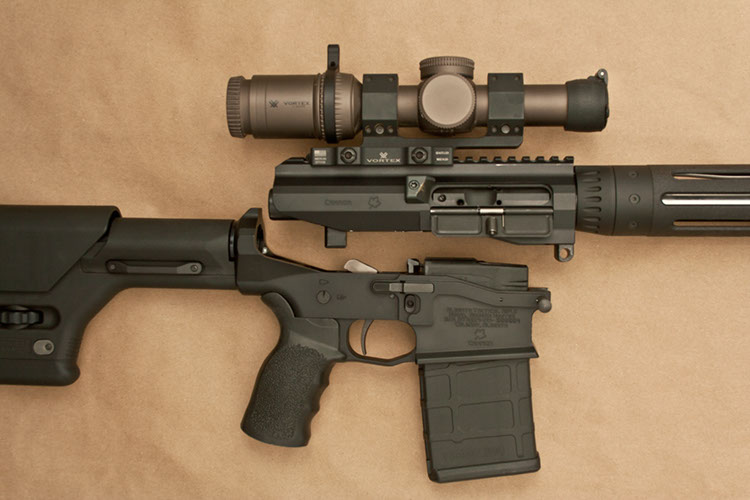 This means you no longer get the speedy bolt access by punching the rear pin of an AR-15 and flipping it forward, but it also means that no AR upper or lower can mate with the Modern Hunter. The placement of the trunnion inside the Modern Hunter lower will block the rear take-down lug of an AR-15 upper. 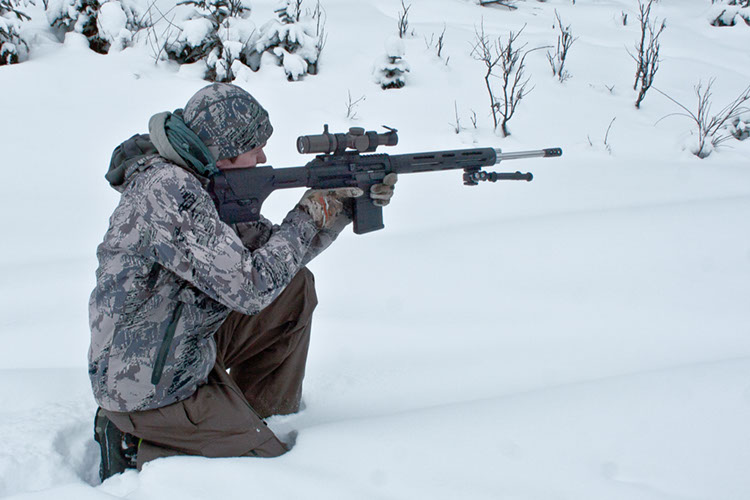 The Modern Hunter uses SR-25 pattern mags, and ships with a Magpul .308 Pmag. Theoretically it is also compatible with the XCR-M pistol magazines imported by Wolverine Supplies. ATRS has no plans to produce a pistol variant of their own. In fact, they are explicitly shunning short barrels and build-it-at-home parts kits to ensure that no restricted variant ever needs needs to be registered with the RCMP.

It is not some miraculous fluke that this rifle meets the non-restricted requirements. The Modern Hunter is an example of exquisite design carefully tailored to Canadian requirements, changing the way we think about black rifles and variants. For a shop like Alberta Tactical Rifle to produce an explicitly Canadian rifle is exceptionally rewarding, and highlights the dedication of our domestic firearms industry.