When it comes to single stage presses, reloaders are spoilt for choice. Far simpler to engineer and use than progressive presses, pretty much every manufacturer out there makes at least a few variations on the theme, with lesser models trading size and strength for affordability while more expensive models typically offer up stiffer frames and additional features. But simply none are quite like this.

The first reloading press built by Canada’s own Alberta Tactical Rifle Supply, the ACCU-MAXX (which we will refer to as the Accu-Maxx from here on out because all-caps in the middle of an article looks silly), press is nothing short of a monstrosity. From the bottom of its ram to the top of its die plate, the Accu-Maxx is just a whisker shy of two feet tall. It weighs almost 40 pounds fully assembled. The handle alone could probably be used to fend off or kill a bear. And the distance traversed by the shell holder is greater than the entire height of a Lee single-stage press. Hell, the entire thing is just so damned beefy you could probably crush a Lee press inside the Accu-Maxx without even breaking a sweat. 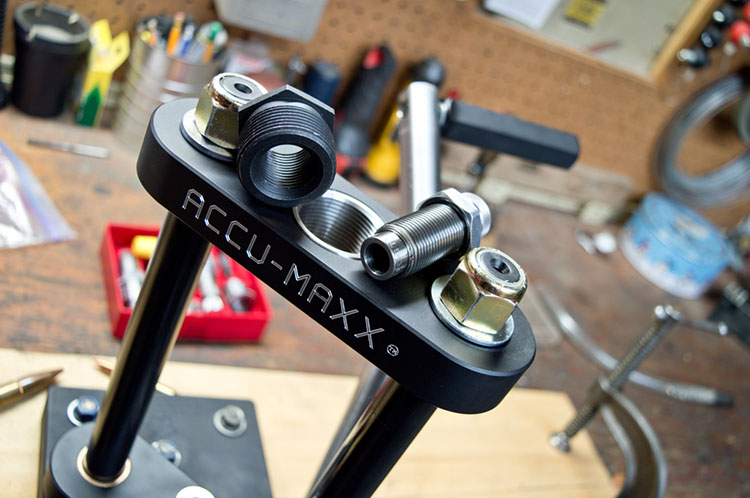 But for such a large, heavy press, Alberta Tactical Rifle Supply has clearly done their homework with regards to the action of this mammoth. Specifically designed to be flexible (in terms of usage, not structural integrity) enough to load everything from .25 ACP to .50 BMG, it was crucial that the Accu-Maxx not require an excessive amount of exertion to resize even huge .50 BMG cases, so it has been fitted with either roller bearings or impregnated brass bushings between all it’s moving parts. And whilst we cannot attest to its ability to load .50 BMG specifically, we can say that resizing once-fired brass fired from even the most liberal chambers was accomplished with about as much resistance as most other presses provide during bullet seating; butter smooth. Also, it’s impressive to note that even with the combined weight of the massive ram (which is hollow to allow expended primers to simply fall out the bottom during depriming) and shell plate, it takes no more than 6 pounds of effort on the handle to bring the ram and all its associated weight to its topmost position. This is owing to that aforementioned combination of roller bearings and grease-impregnated brass bushings, as well as the geometric design of the linkage and lever arms themselves.

Now, we should mention here that the press pictured is Alberta Tactical Rifle Supply’s “Elite” model. The only difference between this and the standard model is the optional salt bath nitriding of the steel components; the ram, posts, and some linkage components. Salt bath nitriding diffuses nitrogen into the surface of a metal through various methods, and results in an extraordinarily durable case-hardened finish that is one of the hardest-wearing around. It is primarily used on everything from crankshafts to camshafts, cam followers, and geartrain components in automobiles, and given the amount of wear typically seen on those parts even after thousands of kilometres worth of extreme use, it’s safe to say that the finish is going to last as long as the press… which is to say, for a very long time. 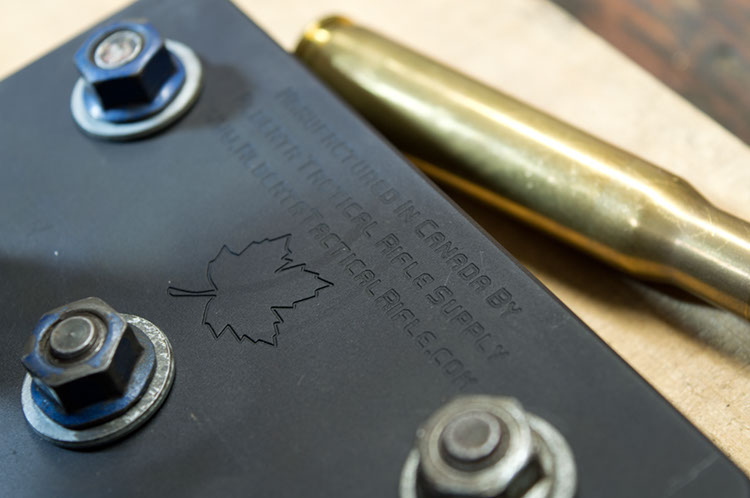 Obviously the major selling point to the Accu-Maxx is its overall strength and rigidity; this thing will not move, bend, or flex between loads which undoubtedly means it is capable of assembling the most consistent loads out of any press on the market. Sadly, because we are mere mortals not imbued with the marksmanship skills required to test this supposition, we couldn’t see any noticeable difference in the performance of loads produced on the Accu-Maxx versus loads prepared on another press, but we also weren’t shooting calibers that would even come close to testing the Accu-Maxx’s capability. For that you probably need something chambered in 20mm Vulcan. Or a Howitzer.

However, even though working the Accu-Maxx meant moving a lot more metal across a much larger distance than we were used to with other presses, the extremely long handle and large amount of leverage provided by the linkage meant it was less tiring to operate. Also, ATRS includes a limiting sleeve that can be placed on the ram to limit its travel to just 4.5 inches; a handy feature when you’re loading smaller calibre rounds… you know, like .300 Win Mag or 7mm Remington Ultra Mag. 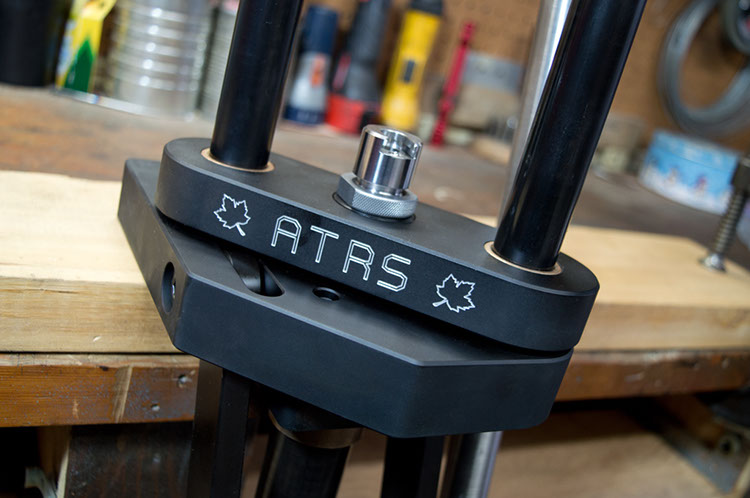 One unique feature of the Accu-Max, beyond its awe-inspiring size, is its handle. Very long and with a slight s-shape to it, it has been designed to increase and decrease the stroke of the ram depending on its orientation; turn the handle 180 degrees, swap the handle to the other side, and it shortens the stroke of the ram without reducing the mechanical advantage. This is very useful for loading smaller calibers. Then, when it comes time to work with larger cases, simply turn the handle around again for the full stroke. Also, the entire lower link of the press can be swapped from left to right side, to make this one of the only left-hand friendly presses on the market.

However, while it’s certainly hard to fault within its specific role as the most heavy duty reloading press money can buy, there can be no mistaking the fact that this press isn’t for everyone. First off, it’s definitively not cheap when compared to the average press, with the base model tipping the fiscal scales as $750. And if you want the Elite, with its higher-lubricity, harder-wearing nitrided finish you can tack another $150 onto that for a sum total of $900. Yes indeed, don’t expect this press to pay itself off anytime soon if all you’re loading on it is .223 or .308. But then again, that’s not really what it’s for. Sure, it can do it, but any press that’s two feet long and weighs almost 40 pounds wasn’t designed with 55-grain .223 projectiles in mind. 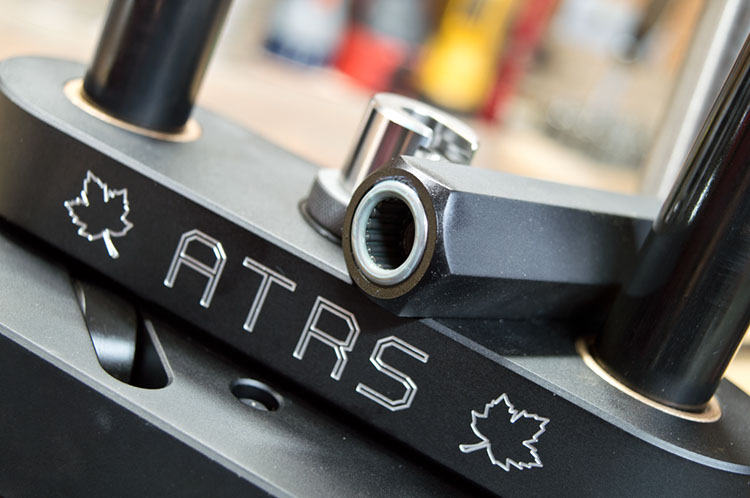 Which brings us back to the statement made at the beginning of this article: that there are simply no other reloading presses quite like this. And as such, it cannot really be as a normal press would. Even the price, which may strike some as double or even triple the cost of many conventional presses, is right on par with RCBS’ Ammomaster .50 BMG kit and Hornady’s Lock-N-Load .50 BMG press, yet the Accu-Maxx is both more robust and easier to operate than either of those presses. It’s got heavier duty components, has a much smoother action, and has the added benefit of its unique handle shape and mounting design. In also accepts RCBS, Lyman, and Redding shell holders and can accept all large-format 1-1/2″x12 TPI dies for big bore reloading, and ships with an adapter to accept all standard 7/8″x12 TPI dies, as well. Furthermore, since the Accu-Maxx is made in Canada, any replacement parts or service required (which seems highly unlikely, to be honest) will be handled right out of Calgary, Alberta, avoiding any cross-border woes or delays. That also means not only does your hard-earned money stay right here in Canada, but also that help and support is just a couple time zones away at most, and will probably come from the machine’s designer himself.

Overall, as with our previous experience with Alberta Tactical Rifle Supply’s AT-15 rifle, we find it extremely hard to find fault with the Accu-Maxx. And trust us, we’ve been trying. But, the reality is that in the realm of really big calibers and even bigger reloading presses, the unavoidable truth is that the Accu-Maxx is second to none.