In the later stages of the Second World War, as the European campaign reached its conclusion, the United States Marine Corps in the Pacific Theatre was still enduring some of the hardest and bloodiest battles of the war. Fighting tooth and nail at places like Guadalcanal, Midway, and Iwo Jima, the inherent inability to functionally retreat from island-based combat combined with the Japanese troops’ refusal to surrender meant the war in the Pacific was a gristmill; grinding men and machinery on both sides into dust under the oppressive tropical sun.

And for historical gun and militaria collectors, that effect was almost literal, with relics from the Pacific Theatre being some of the most difficult to find. In the frenetic pace of combat in an area that stretched out over the span of thousands of miles of ocean dotted with tiny islands, things were easily lost, and simply forgotten as the next objective hove into view. Likewise, the very environment itself conspires against the reclamation of many objects; where rifles and relics can still be found embalmed in the basements and battlefields of western Europe, the Pacific’s tides, salt air, and tropical conditions have long since turned any similar objects into unidentifiable hunks of oxide beneath the sand. And in other areas, like the Aleutian Islands off the coast of British Columbia, whole Japanese tanks, artillery batteries, and submarines lie rusting on islands too remote to ever be recovered from. 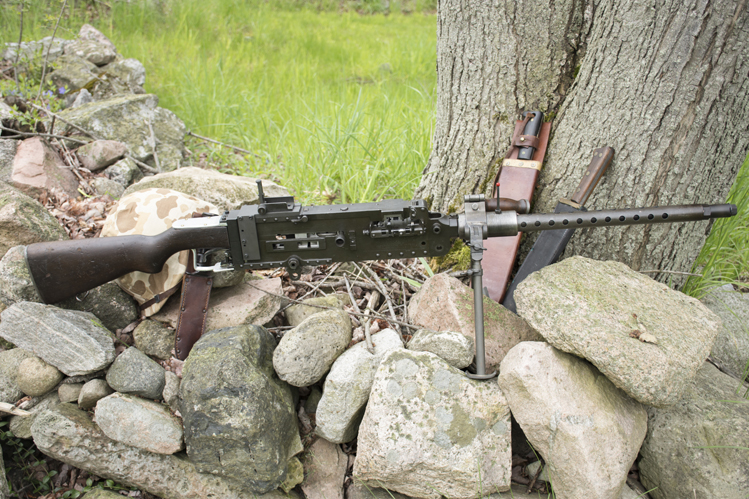 But all these factors also combined to create some innovative tactics and weapons. Lessons learned on the beaches and mountains of many of those tropical islands are still used by today’s troops. In fact, some could argue that it was during the battles in the Pacific Theatre that the US military began to open their eyes to the effectiveness of greater volumes of fire; a lesson that would eventually end up with the adoption of the modern 5.56 NATO cartridge and AR-15 rifle. The scarcity of hard cover and overabundance of concealment in the Pacific’s jungles meant maneuvers often required withering covering fire… a strategy that would end up becoming one of the hallmarks of the first war to see widespread use of these new tactics: Vietnam. 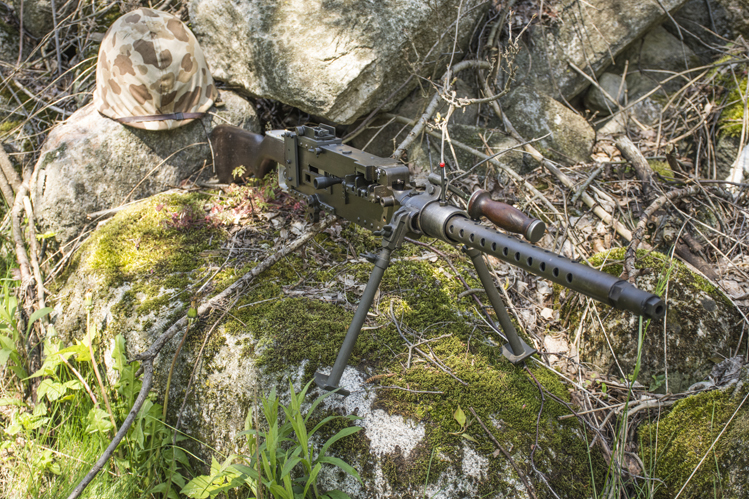 But, long before Eugene Stoner was working on the rifle that would be used in that war, some equally creative members of the US Marine Corp were working on a stop-gap solution to their own problem. Armed with M1 Garands, Thompson submachine guns, Browning Automatic Rifles, and Browning 1919A4 machine guns, the simple (and undoubtedly surprising) reality was that the Marines were lacking in firepower: They just couldn’t put rounds downrange fast enough. The BAR, although maneuverable, had a limited magazine capacity and possessed a cyclic rate of roughly 650 rounds a minute. The belt-fed 1919A4 solved the capacity problem, but still only put between 400 and 550 rounds downrange per minute. And of course the Thompson simply lacked the punch of the rifles and machine guns, and the Garand was semi-automatic only.

That need would be satisfied in the later days of the campaign on Guadalcanal, when intrepid Marine Assaulters began experimenting with the Browning Machine Gun, Cal. 30, M2, Aircraft. Better known as the AN/M2, this Browning 1919-based gun was a full third lighter than 1919A4 the Marines were used to, weighing just 21.5 pounds rather than the 31-pound 1919A4. It also had a cyclic fire rate roughly three times that of the standard 1919A4 with a cyclic rate of between 1200 and 1350 rounds per minute. Typically fitted to blister and tail gunnery positions in various bomber aircraft, the multitudes of wrecked Douglas SBD Dauntless aircraft in the theatre became the donor of choice, its tail gunner’s position being fitted with a pair of AN/M2s. 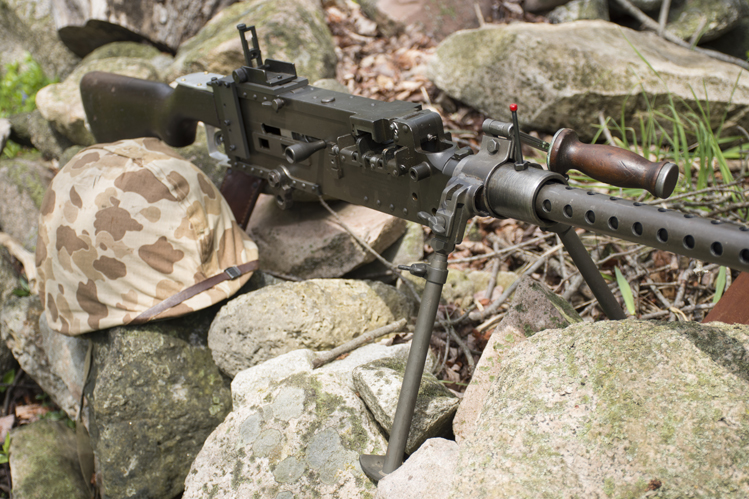 And so, on November 1st, 1943 as the Marine Corp came ashore on Bougainville Island at the commencement of what would be a year-long campaign to liberate the island, AN/M2s were carried ashore and fitted into fixed defensive firing positions to secure the beachhead; the guns’ spade grips and buffered aircraft mounts conspiring against their more active use.

But the Marine Corps’ mantra of adapt and overcome prevailed. One intrepid private, William H. Colby of Gloversville, New York, took it upon himself to fit his AN/M2 with a bipod at the muzzle; transforming the balky aircraft machine gun into something that could at least be fielded… even with its awkward spade grips. Two days after the beachhead, his platoon was ambushed, and Colby immediately dropped to the ground and deployed his modified AN/M2 machine gun. Being fed .30-06 rounds by his assistant gunner, Pvt. Edward F Crumlish, Colby and overwhelmed the Japanese forces, and the attack was repelled due largely to the AN/M2’s ridiculous rate of fire. 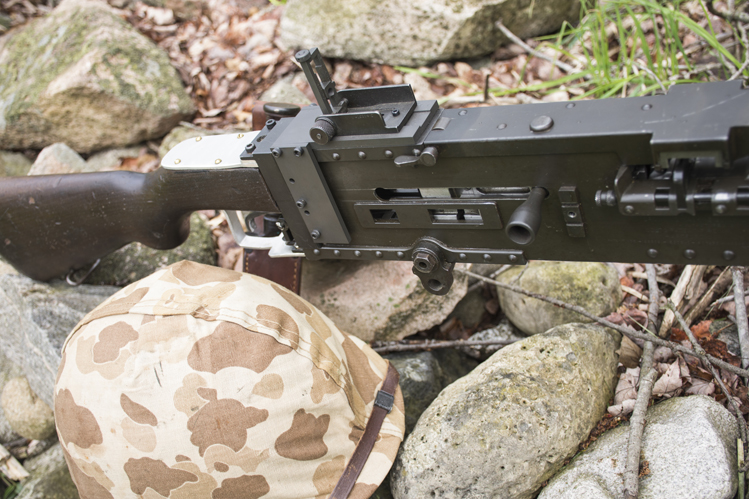 Obviously, while that result was as good as could be hoped, the tool itself needed some improvement and so two Marine paratroopers took an AN/M2 and more extensively modified the gun, taking Colby’s cue of fitting it with a bipod but taking further steps towards making the AN/M2 a proper man-portable machine gun. Step one was to trade the muzzle-mounted bipod for a proper folding barrel shroud-mounted bipod taken from a BAR. A BAR also volunteered its rear sight, to replace the AN/M2’s aircraft sights. Finally, a Garand stock was cut in half and the buttstock portion fitted to the rear of the machine gun’s receiver, and a trigger mechanism fabricated to replace the spade grip. The result was something of a visual abortion, but as they say in the military, if something is stupid but it works, it’s not stupid. And so the AN/M2 “Stinger” was born.

Roughly one year later, in November of 1944, one of the Marines that had concocted the original Stinger machine gun, Sergeant Mel Grevich, had been re-assigned. After Bougainville, his Parachute Battalion had been disbanded, and Grevich found himself in the machine gun section of G Company, 28th Marine Regiment, 5th Marine Division where he was woefully disappointed (yet again) by the performance of his Marines’ light machine guns. Recalling his Stinger prototype, Grevich set to work replicating the gun, eventually creating six guns total before sailing for Iwo Jima. One gun was assigned to each of G Company’s three rifle platoons, one more to the company’s demolitions section, and the fifth carried by Grevich himself. The sixth gun was carried by another parachute-qualified Marine by the name of Tony Stein from A Company, 28th Marines. 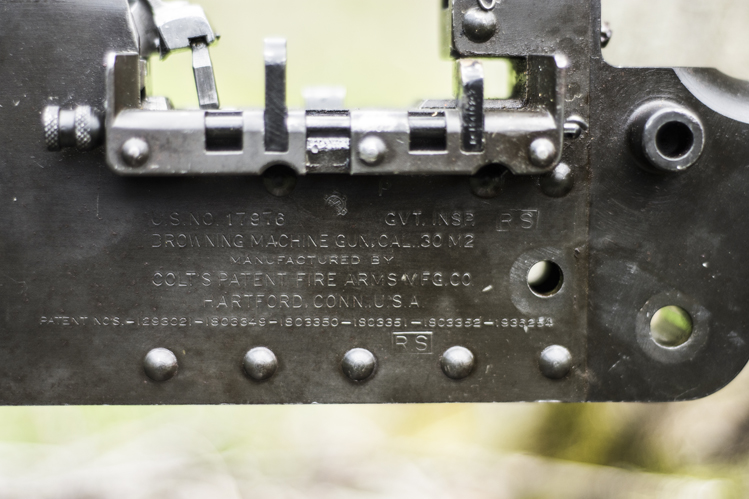 As the Marines landed on Iwo Jima on February 19th, Stein used his Stinger machine gun to provide covering fire for his platoon, and repeatedly and purposefully exposed himself to enemy fire to reveal the position of enemy pillboxes and emplacements. He then used his own Stinger machine gun to eliminate several of the enemy positions, killing upwards of 20 enemy soldiers. Unable to defeat one of the pillboxes with his Stinger machine gun alone, Stein directed the fire of a 75mm gun borne on a half-track; having his Stinger shot out of his hands twice during his efforts. Throughout the battle, Stein ran back to the rear no less than eight times to get more ammunition for his Stinger, carrying a wounded Marine on his back each time. Stein would be killed a few days later on March 1st when he volunteered to lead a group of Marines on a mission to eliminate a complex of pillboxes, but was posthumously awarded the Medal of Honor for his actions on February 19th.

With only a handful of Stinger machine guns having ever been created, and all having subsequently been used in one of the most frenetic theatres of war, it’s no surprise that none survive today. Military inventories do not like non-standardized equipment. Tony Stein’s own Medal of Honor citation doesn’t even list the Stinger; it simply refers to his use of “a personally improvised aircraft-type weapon.” So it’s unlikely that any surviving Stingers, beyond perhaps Stein’s own, would have been retained in stocks… and certainly not to this day. So when Paul Shull, the Canadian host of the Smithsonian Channel’s TV show “The Weapon Hunter” wanted to tell the story of and shoot an AN/M2 Stinger machine gun, he realized he have to build one, so he turned to the Canadian Historical Arms Museum. 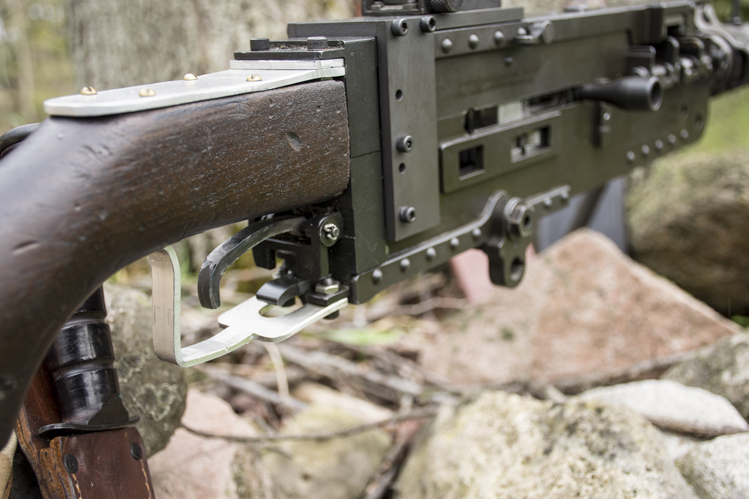 Obviously the largest component to the Stinger machine gun build was the actual AN/M2 itself… and luckily for Paul, the museum had not one, but two on hand to choose from. From there, it was a matter of referring to original photographs in order to replicate the stock, trigger, and sights. Although a simple enough modification, the conversion was no small process, and was made all the more difficult by the risks involved. An aircraft machine gun firing 1300 .30-06 rounds per minute is not a gun you want to have a problem with.

Since the gun is pictured here in one piece, and the season finale of The Weapon Hunter saw Paul end the show with the same number of limbs and digits he opened it with, the recreation obviously worked. From start to finish, the project took roughly three months to complete; slightly longer than the original modifications due to the desire to remain historically accurate to a pre-existing formula rather than simply make a functional gun. 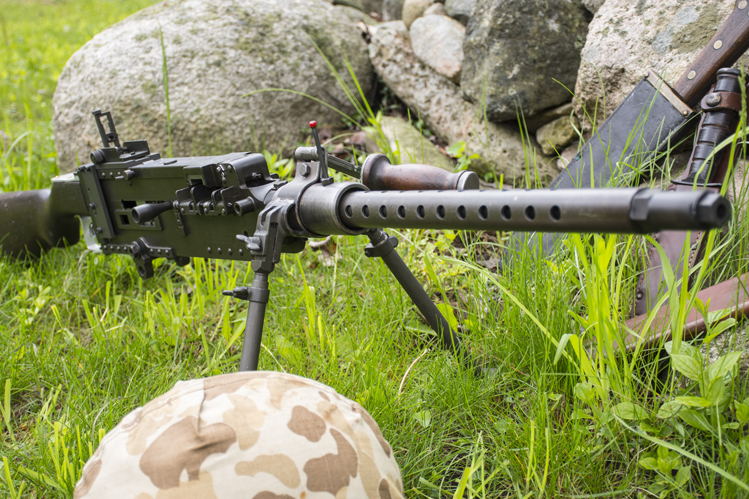 Appearing in the sixth and final episode of The Weapon Hunter’s second season, the gun demonstrated the impressive mobility and firepower it offered to those Marines on Iwo Jima by blowing apart simulated sandbag emplacements on camera, before being safely returned to the museum collection where it still resides… the only operational Stinger machine gun in the world, in a museum, in Southern Ontario. Who would have ever guessed.