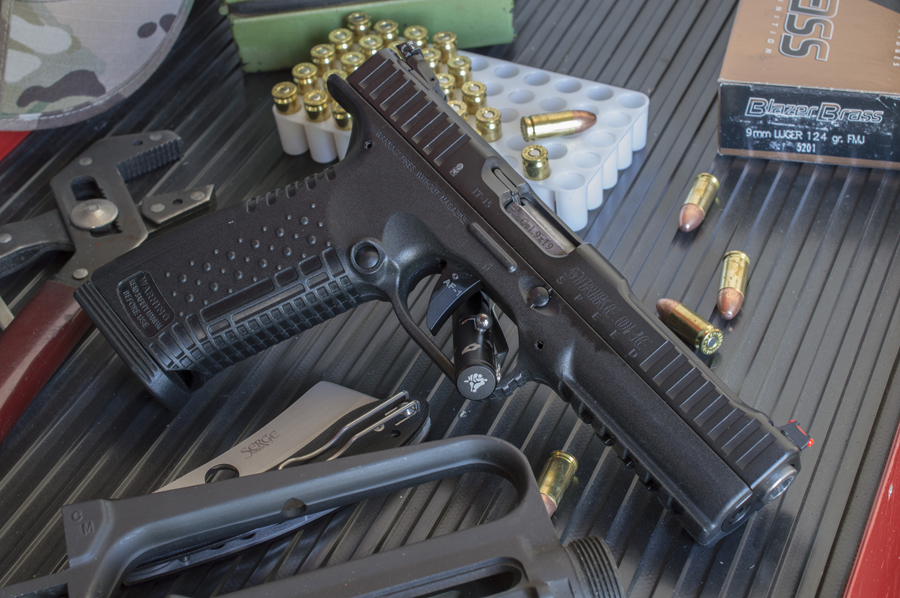 Ever since Gaston Glock began popularizing the polymer-framed, striker-fired pistol in 1982, we’ve seen dozens of renditions on the theme, all trying to out-Glock all of Glock’s most striking (pun very much intended) feature: Simplicity.

The Arsenal Firearms Strike One Speed does not.

Yes, it has a frame made of polymer, with a steel chassis pressed into it. And yes, the slide contains a striker assembly, not unlike that you’d find inside a Glock. But where the Glock design leans on simplicity as a necessity of its “reliability above all else” ethos, the Strike One Speed puts a greater importance on performance, and as such is far more finely made and reasonably more complex. In fact, in the realm of polymer-framed, striker-fired pistols the Strike One Speed is about as far from Gaston Glock’s famous design as you can get. 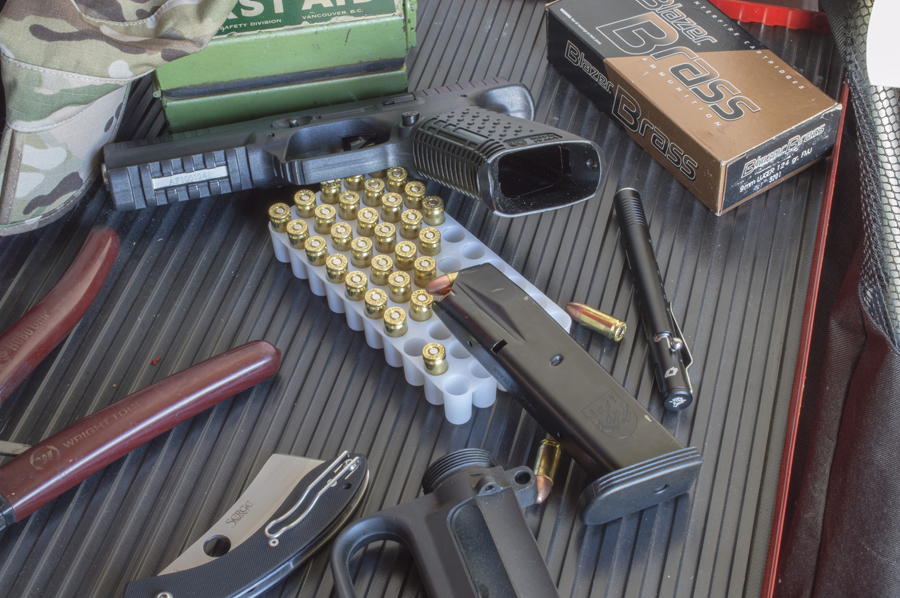 And perhaps nothing encapsulates that difference more than the gun’s core design feature: The barrel lockup. Instead of utilizing the familiar tilting-barrel method of lockup, the Strike One Speed uses a girdle-shaped trunnion of sorts that is pulled downward as the barrel and slide proceed rearward under recoil, unlocking the slide from the barrel as it does so. This fashion of lockup is very expensive and far more complex to manufacture, but reduces the amount of reciprocating mass over the pistol’s bore, due to the elimination of any locking interfaces atop the barrel.

It’s a very slick system, and in our experience, it definitely works. That it does result in a lower slide profile is plainly obvious, and in our testing there were no hang-ups of any sort, so we’re comfortable calling it reliable. We stopped short of measuring the load-bearing surfaces that comprise the Strike One’s locking lugs but given the abundant quality with which the gun was clearly manufactured we also have no concerns as to the gun’s long-term reliability, either. In fact, for those of us that are mechanically minded, it’s a beautiful system in its operation, and makes for a gun that cycles incredibly smoothly. While a conventional tilting-barrel pistol will usually rattle a bit when unlocked, the Strike One Speed keeps the barrel retained inside the trunnion (which itself is held firmly to the frame via the take-down pin) throughout the firing cycle, and so feels much more monolithic when the slide is manually racked. It’s hard to describe, but it’ll be a familiar sensation to those that are familiar with the way a Beretta 92 handles, and it’s definitely a nicer feeling than the average semi-auto imparts. 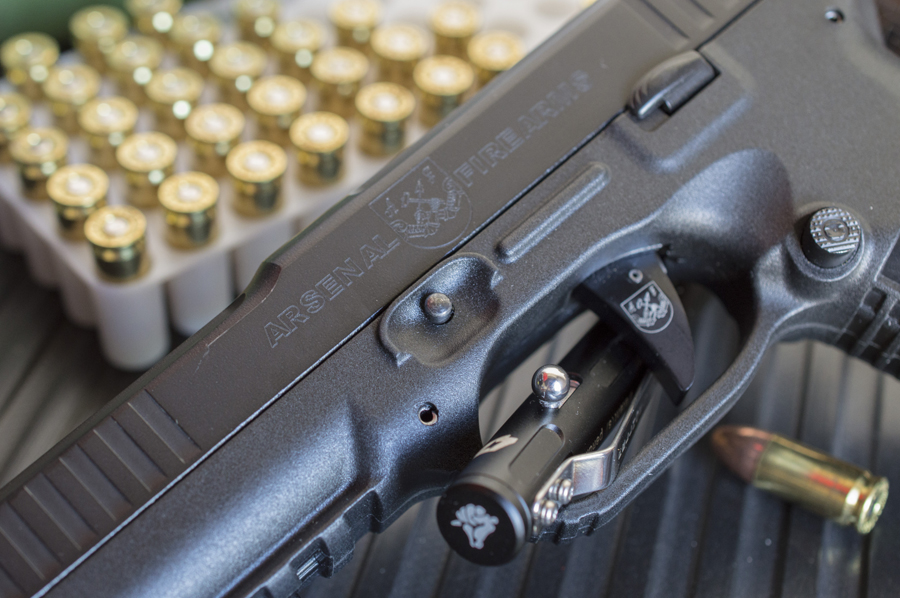 But the differences don’t stop there. If you happen to take apart a Strike One Speed, once you figure out the weird lockup system, you might notice that the internal components of the slide look dramatically different from what one finds on the back of the average striker-fired pistol’s slide. In yet another attempt to limit the slide’s height, Arsenal Firearms eschewed the conventional vertical striker block, preferring instead to create an innovative horizontal striker block. The striker block, a key safety component in striker fired guns that prevents the striker from accidentally impacting the primer if the gun is dropped or the striker accidentally slips off the sear, is usually installed under the rear sight and is comprised of a spring and the block itself. At the beginning of the trigger’s travel, before the striker is released, this block is usually pushed upward and out of the striker’s path in preparation for the striker’s release. 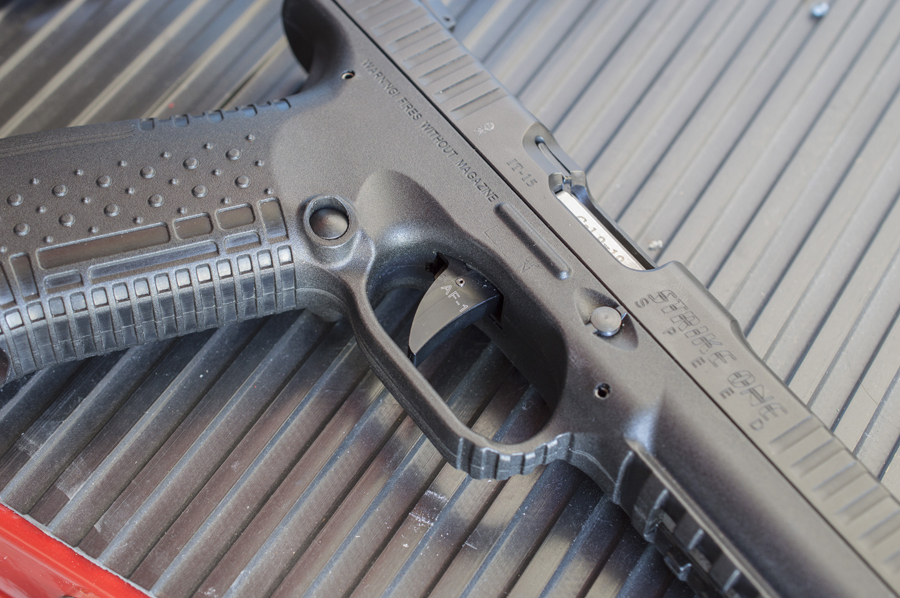 Now a tiny little safety feature many not typically warrant two paragraph’s worth of explanation, and undoubtedly many readers may feel this is a bit longwinded, but much like the lockup system this striker block design is gracefully innovative and really does make a lot of sense. And although it may seem tiny, it plays a very large role in further ensuring the Strike One’s slide is as low as possible, and also has large ramifications on the gun’s unique trigger pull.

Which brings us to the Strike One Speed’s specific design purpose. While the original Strike One Speed is marketed as a competition gun in the Western world, it’s basically the civilian version of the Strizh, a duty pistol that the Russian Army has reportedly adopted to replace their aged Makarovs. As such the Strike One Speed has many of the aforementioned inherently cool design features aimed at making the slide as low-slung as possible in order to reduce recoil, but is also externally simple, with fixed (and strange) sights and a familiar duty trigger configuration and pull… both features we lamented in our review of the original Strike One. It was an odd juxtaposition of inherent capability and innovation hamstrung by the lowest-common-denominator factor that large-scale, issued duty pistols are typically afflicted by. 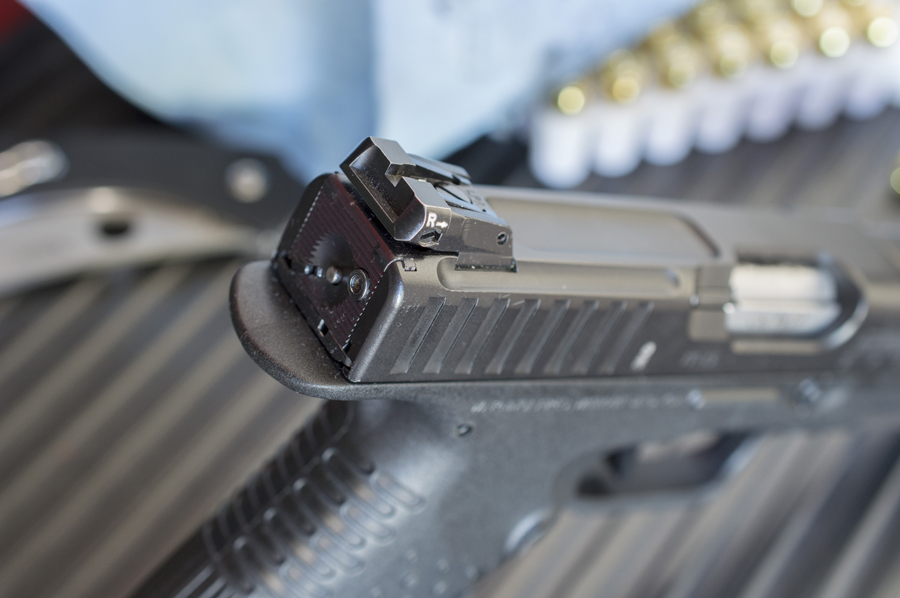 The Speed model, on the other hand, was specifically created to fulfill many of the original’s lofty competitive aspirations. But they didn’t have to change much. Boasting a milled slide that’s just a wee bit lighter, optional tuned trigger packs, and most importantly a new set of conventionally-fitted adjustable sights the Speed isn’t a reinvention of the original Strike One… it’s a Strike One with a few go-fast parts installed.

And if we’re honest, there’s only one part of the above paragraph that really matters: The sights. The original Strike One’s sights are relatively mundane and, in the case of our previous Strike One tester, colour-matched to the stainless steel slide. That meant we had to find a grey front sight, in a grey rear sight, on a black or white target. Literally, the worst contrasting sight setup imaginable; it didn’t work regardless of what colour your target was. And even worse, while the front sights was dovetailed in place, the rear sight was integral to the slide rear cover. That means you’ll never find replacement sight setups from any of the popular brands for a standard Strike One.

The Strike One Speed, on the other hand, has a very nice adjustable rear sight that’s affixed to the slide via a conventional dovetail. That means it’s probably entirely possible to replace the sights with some form of aftermarket setup and a quick Google search confirmed that options are available to fit fibre optic or tritium rear sights… although offerings are still what we’d classify as “sparse.” But honestly, unless you’re one of those shooters that requires all your pistols to have the exact same sight setup, it’s probably a moot point as the stock sights are very good. 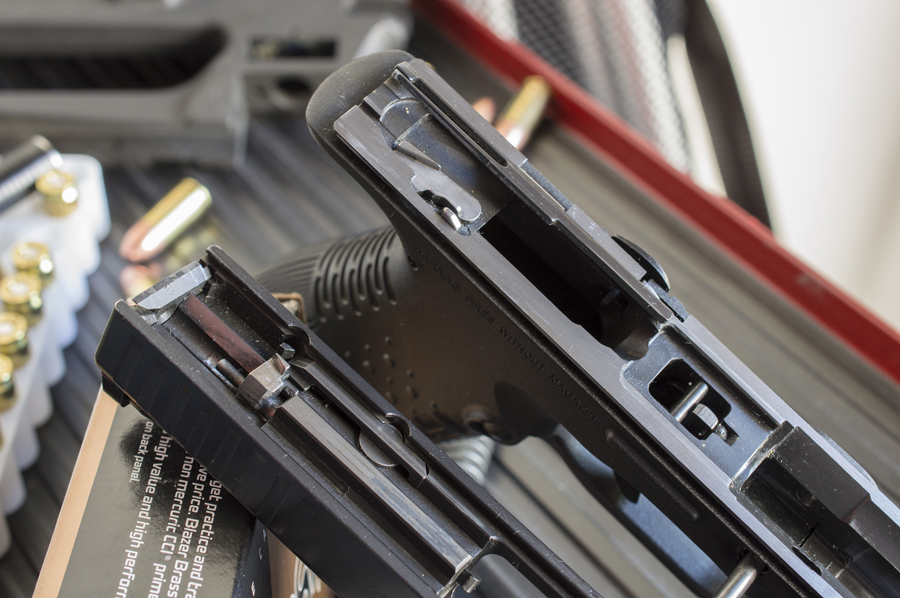 The trigger, while certainly better than the standard gun’s, is still indicative of the Strike One’s unique firing system. If you hear “tuned trigger” and expect a 1911-style trigger pull that pairs the terms light and crisp in a way that could only be improved upon by low-fat fried chicken… well, you’ll be disappointed. Largely due to that horizontal, low-profile striker block, the trigger must be pulled quite a bit farther on the first shot than many conventional striker-fired guns. Additionally, we suspect the Strike One uses a semi-pre-set striker assembly, so even after the striker block has been moved there’s still some trigger pull required to pull the striker back before it is released. As a result of all this, the trigger pull is long-ish, and has a rolling break that feels very much like an H&K trigger of old. It’s great for those that don’t want the opportunity to anticipate the trigger break, and undoubtedly with practice one can get very fast with it, but it’s definitely not what we’d call conventional.

And that probably sums up the entire experience of shooting the Strike One Speed. From the moment you pick it up, it doesn’t feel like a normal gun. The grip is probably the longest modern pistol grip in the world, but the circumference is quite normal; the result of the Strike One’s narrowly double-stacked magazines. Loading the Strike One Speed is insanely easy, as the designers have used some of the real estate inside that insanely long grip to create a huge bevelled magazine well, which works in conjunction with the narrow and tapering magazines to make reloads require about as much finesse as easy as throwing a hot dog down a hallway. You can literally just toss the magazine towards the gun and it’ll probably end up where it needs to be. 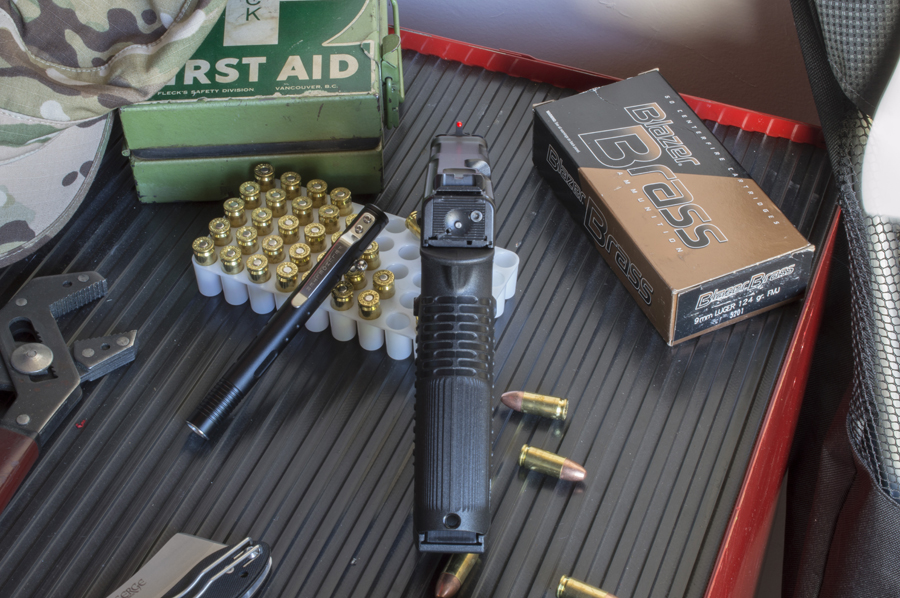 In terms of recoil management, all of the work Arsenal Firearms has put into creating the Strike One Speed’s design was worthwhile, as we certainly found the pistol to be very easy to handle. Of course, the higher your hand can ride on the pistol the better the gun will handle recoil, but we’d be remiss if we didn’t credit at least some of that tame behaviour to the overall size of the thing. With a five inch barrel it’s not a light gun by any stretch.

It is, however, accurate. It is one of the most accurate pistols that’s ever crossed our desk here… sort of. See, in testing the gun off a rest, we managed to eke out 2” groups at 20 metres from just about every variety of ammo we had available. That’s pretty good, but hardly ground breaking. The big news was that we managed to shoot pretty much the exact same groups unsupported, and we’re not so good that we can claim a rest doesn’t normally help a wee bit! So why does the Strike One Speed perform so well in the hand? 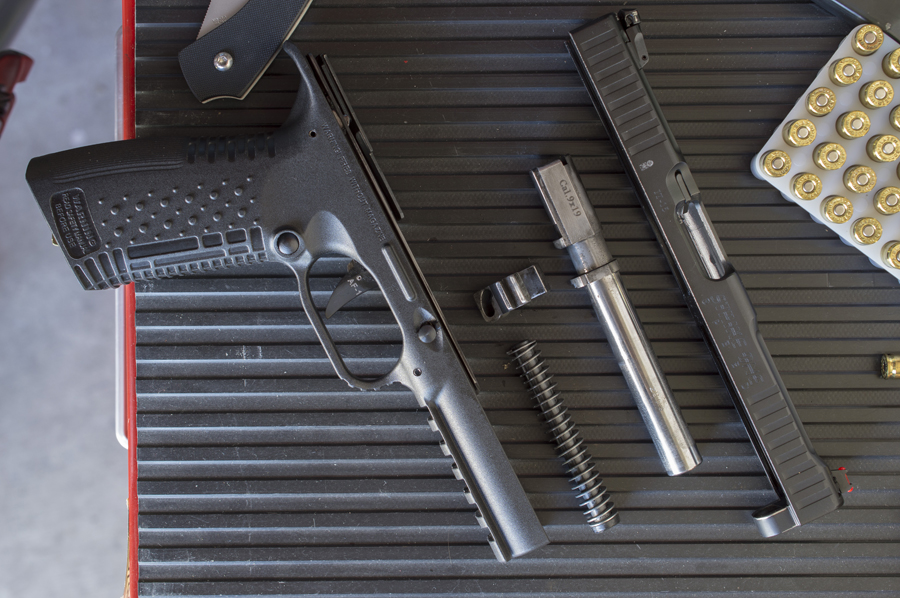 That’s the result of a bunch of factors. First off, the five inch barrel and beautifully cut 11-degree target crown undoubtedly helps throw lead more consistently. Likewise, we suspect the incredibly well-fitted nature of the full-length slide rails and beautifully made internals help the gun come back into battery the same way every time, helping mechanical accuracy. Secondly, the longer sight radius and the combination of the fibre-optic front and blacked-out rear sight make it easier to shoot accurately. And, for all its unconventional nature, that rolling trigger is incredibly smooth when it breaks, so your pull is less likely to sway your shot placement. And of course, it’s ergonomic as hell, thanks to all the work Arsenal Firearms has done.

Now that’s not to say it’s perfect. The slide release is low-profile and out of the way but also doesn’t provide the shooter much purchase during reloads. Replacement parts may not be as easy to find. And finally, the grip texture is not aggressive enough, and were we to buy one we’d probably end up stippling it or covering it in sandpaper. But that’d suck, because buying a Strike One Speed will set you back right around $1,400… so maybe we’d go with the sandpaper option, rather than the “I’m just going to use a soldering iron to permanently alter my $1,400 pistol’s polymer frame.” 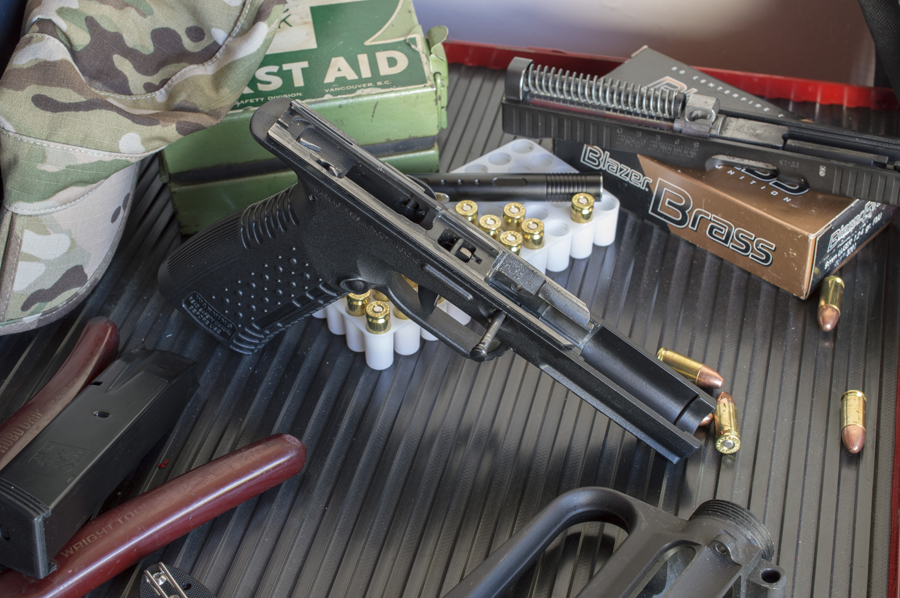 In light of that, it’s pretty clear that the Strike One Speed won’t be for everyone. We do think it’s a more broadly appealing pistol than the original Strike One, due largely to the use of normal-style sights, but it’s still something of an esoteric gun. For those that appreciate superlative quality, and unique mechanical designs, it’s fantastic. We won’t draw the hackneyed comparison to a fine Swiss timepiece, but the Strike One Speed is a lot like a modern Seiko automatic watch, in that it balances old-world ingenuity and quality with modern practicality. It’s not like a Glock. It’s not like anything else out there, really. And that’s something to be appreciated.