A Brief History of Nine

The story of the S&W auto line begins when, shortly after WWII, the US army expressed interest in replacing the 1911 as its standard service pistol. Impressed by the German-issue Walther P38, the Army Ordnance Corps wanted a smaller, lighter, double-action pistol. In response, S&W developed the X100 prototype—a 9×19 mm with a four-inch barrel atop a steel frame, secured with a 1911-style bushing and sporting a seven-round single-stack magazine. The Army ultimately rejected the S&W, along with every other competitor’s model, abandoning trials and retaining the 1911 for another generation.

Not wanting to waste the resources they’d already invested, S&W tuned the X100’s design up and released it in 1954 as the Model 39. Now sporting an eight-round magazine, a more vertical grip and, soon after, an aluminum-alloy frame, the Model 39 was quirky, roughly machined, and featured a European-style “crunchenticker” trigger alien to most American shooters. Police departments, thoroughly committed to revolvers, largely ignored it; while the civilian market only slowly warmed to the concept. 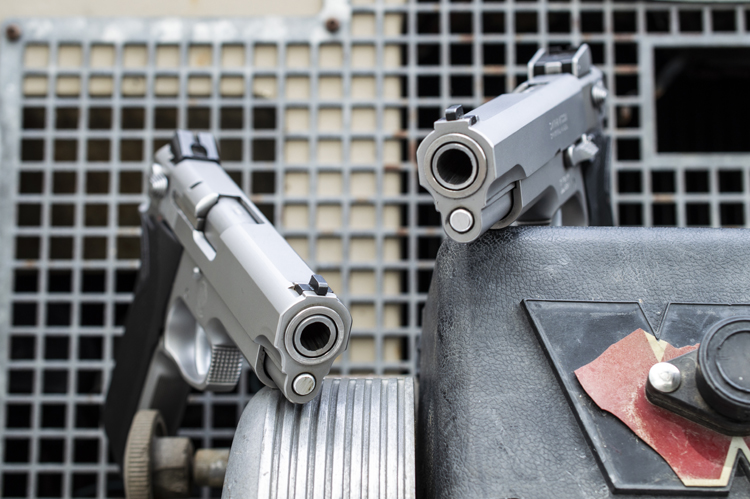 Despite past failures with the American military, S&W agreed to build a double-stack version of the Model 39 for the US Navy, intending to fit existing Browning Hi Power magazines. Like the Army, the Navy also rejected the pistol, this time after field tests with a Navy SEAL commando unit in 1970. Once again, S&W thought their design had potential and released it to the public in 1971 as the Model 59, simultaneously establishing an enduring branch of S&Ws and launching one of the most confusing model numbering systems around. 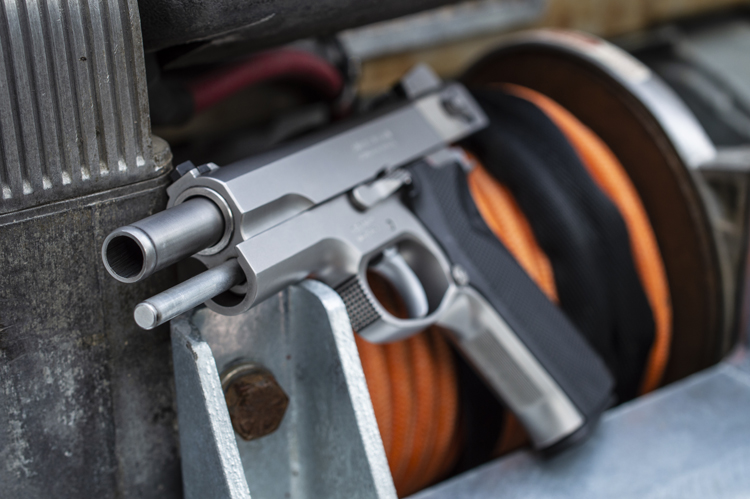 While minor improvements during 1970s earned the gun sub-generation monikers (such as the easily recognized 39-2), S&W only made its first definitive change to the pistol in 1979, when it launched the gun’s second generation. The new generation was basically the same as the last but with slightly better machining and three-digit model names: 439, 459, and 645. The 439 and 459 were reworked 39s and 59s, while the 645 was a new, 8-round, single-stack .45 ACP. This numbering system remained comprehensible until the company introduced steel-framed and stainless models with altered first-digit model numbers (except for the .45) that stood for action type, since the 745 was a single action only variant. S&W also released the double stack in a compact edition, for which S&W altered only the model number’s second digit. For example, the 669 was a stainless, compact version of the 59. Keeping up so far? Good.

The Other Greatest Generation

And so we arrive at the ultimate evolution of the S&W auto, the third generation. This is S&W at the peak of its metal pistol game. Some of the company’s guns during this period are near-high-dollar 1911-build quality and radically exceed most factory 1911s. And the nomenclature? Well, that’s the best part. Since this review focuses mainly on the third generation, it’s important that you memorize the following simple system. Ready? 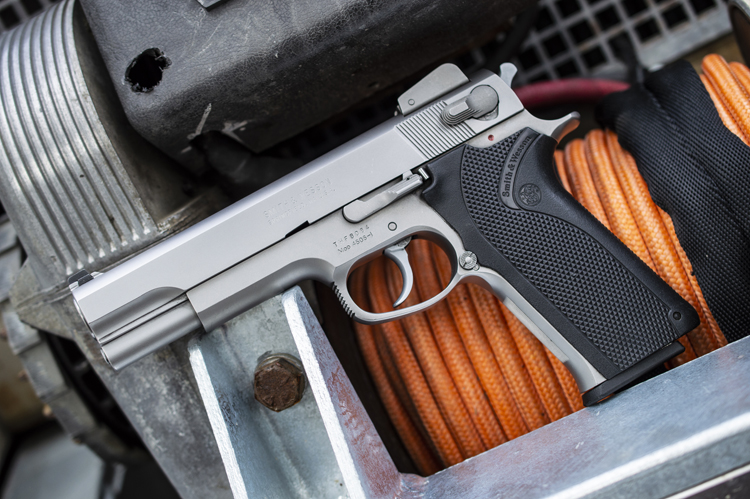 Okay, the last two digits from the previous generation become the first two digits of this generation. The third digit is now the action type, but it’s also the frame size. The last digit is the frame material, but it’s also the overall finish. Good? Now, there are also a couple random three-digit outliers, like the 908 and the 457, plus there’s the CS9 and the like, which are subcompact models with alloy frames and stainless slides. Outside of these, you can rely on the third digit to inform you of where the decocker is mounted—a two, a three, or a seven means the decocker is mounted on the frame instead of the slide, but the seven also denotes a midsized frame whereas two would be standard and three compact. On the other hand, if it’s a double-action-only pistol, respective frame size is represented by a four instead of a two, a five instead of a three, and an eight instead of a seven. If the fourth digit was a six, the finish would be stainless, unless the frame was alloy, in which case the fourth digit would be a three. A four indicates that the gun is black and alloy, because if it was steel the number would be a five. This simple numbering system was so complicated that S&W supplied dealers with a decoder wheel that had a series of numbered concentric rings, each representing a successive level of insanity to which everyone involved was being driven. 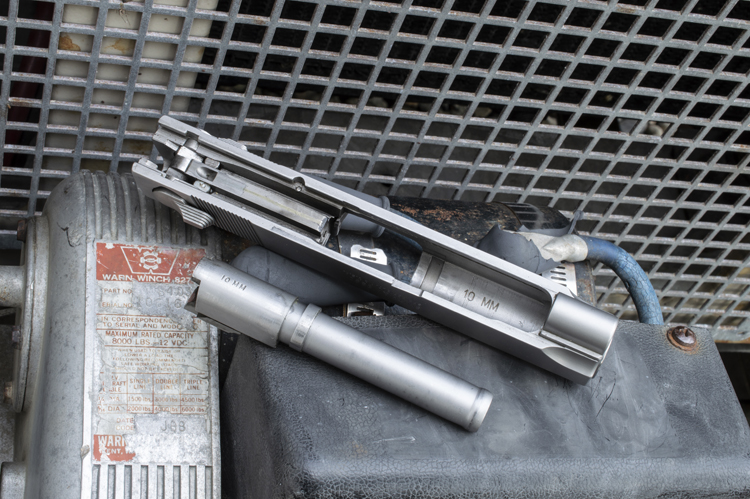 Despite the company’s bewildering number of available options for the pistol, S&W kept up with demand and made most combinations work well. The third generation of the pistols substantially improved upon the second, with most changes made because of recommendations from legendary pistolsmith Wayne Novak. Most obviously, S&W adopted slimmer, wraparound grips and beveled the frame’s leading edges (while removing the “stepped” look of the sides). It also removed the hook from the front of the trigger guard, because, by 1988, putting a hook on the front of a trigger guard was finally seen as a detriment to handling. The third generation also featured dovetails for fixed Novak sights, a huge improvement on the fixed sights of previous models. Some models, however, retained the optional and unusual shrouded adjustable rear sight of the 645. Other subtle improvements included a reworked beavertail, a new safety/decocker, and a matte, bead-blasted finish. The 1911-style bushing was also replaced by a pressed-in bushing and a laterally fluted barrel. This was the apogee of the S&W auto line—the guns were reliable, accurate, and robust. Also, at last, these pistols gained widespread respect and adoption by major law enforcement agencies, not least of which was the Royal Canadian Mounted Police, who began issuing the double-action-only S&W 5946 in the early 1990s. 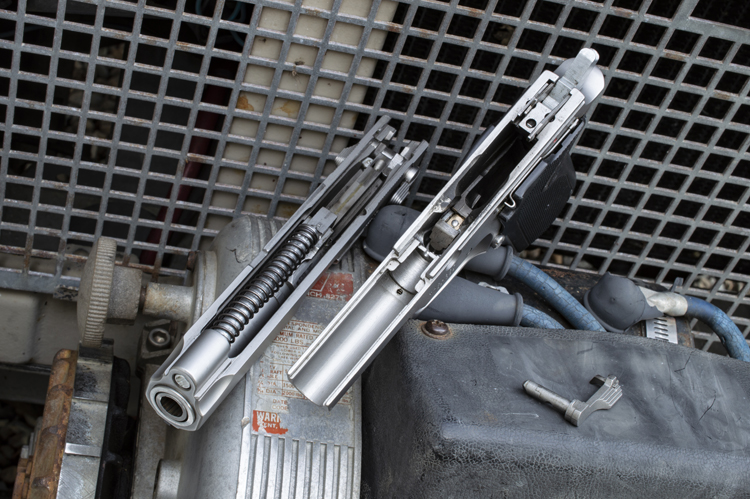 We’re proud to say that the two examples we hold here at the Calibre Magazine armoury are among the best of the breed: the massive classic S&W 4506 and the storming powerhouse S&W 1066.  Having read our simple description of third generation model numbers, we know it comes as no shock that these are a pair of stainless steel, traditional double-action pistols . These pistols are extremely similar. They have double-action trigger pulls in the eleven- or twelve-pound range (although, the S&W 1066 has a consistent weight while the 4506 primarily stacks in the last few millimetres of press). In single action, both guns have a short reset and a crisp break with little take-up and 1911-like overtravel and require only small amounts of pressure—four pounds to touch off the .45 and five to touch off the 10 mm. 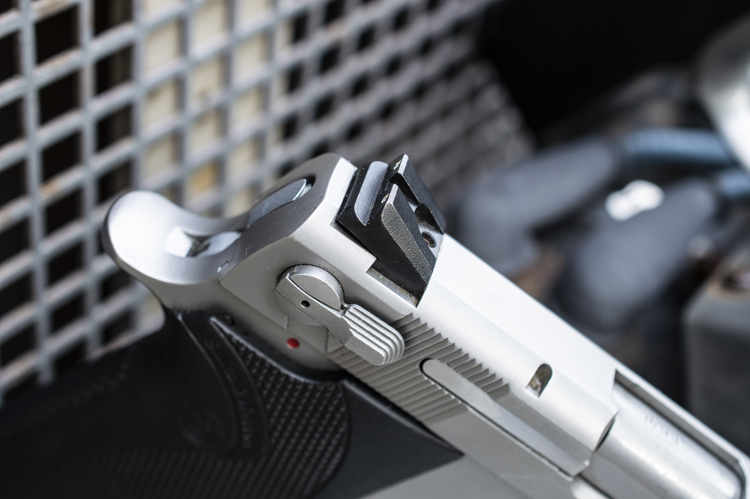 The S&W 1066 sports a bobbed hammer, common for that model, then, since, at that time, a mid-sized steel 10 mm was considered a practical carry pistol. The slide release is a little larger than a standard 1911 but otherwise similar to a high-end aftermarket part with clean, positive serrations and a massive feel. Similarly, the ambidextrous, slide-mounted safety lever is, if not the bar stock this gun deserved, a quality metal-injection-moulded (MIM) part with grippy serrations and positive engagement.

In fact, the safety/decocker arrangement is one of our favourite features of the series. The design traces back to its original inspiration, the Walther P38, which means that applying the safety automatically decocks the gun, so putting the pistol on safe drops the hammer and returns the pistol to its double action, heavier trigger weight and length. For this reason, the TDA models can be treated either like a SIG P226 or similar, decocking the pistol between strings of fire and otherwise relying on the long, heavy first trigger press to inhibit unintentional discharges, or, for an added layer of safety, the decocker can be left in the “safe” position, which renders the trigger inert. Furthermore, S&W designed the guns with a magazine safety, which, while not everyone’s cup of tea, adds a further level of control, as removing the magazine also disables the firing mechanism. S&W thought of everything. 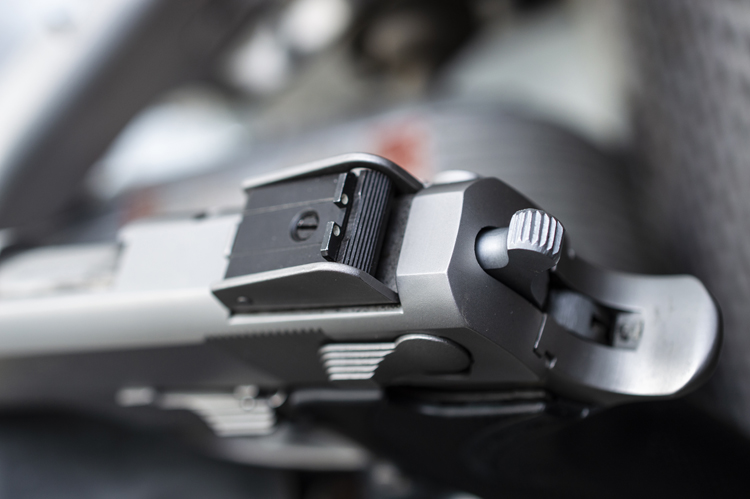 With the mags loaded and the lead flying, these little tanks really come into their own. The stainless frames soak up recoil from big-bore cartridges, which means the shooter can wring quite a bit of speed out of the quick, light trigger on follow-up shots. The gun handles like a 1911, although hardcore Browningophiles will be slightly disoriented, given that the safety is in the same spot as on those guns, but the direction of operation is reversed. The beveled magazine well (also a third-generation feature) is generous (and would be for anything but a pure competition gun), so reloads are easier than with a stock 1911. The magazines themselves are near-identical to the 1911’s. The wraparound grips’ rear and side straps are checkered, while the front strap of the frame is serrated, providing a grip Glock needed four generations to develop. 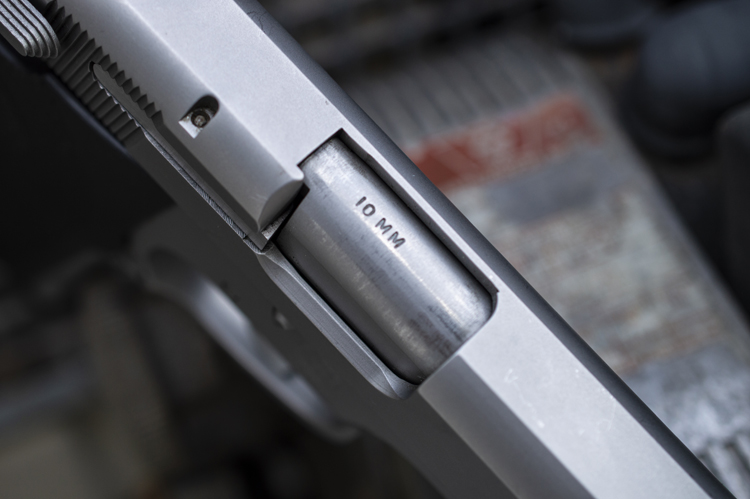 Granted, our two examples are some of the best renditions of the platform, chambered for cartridges known to be accurate and offering highly predictable recoil impulses, making them among the easiest to design for reliability. Even so, these are terrific shooters. The S&W 1066’s Novak fixed sights (with tritium dot on the front) are the same Novaks people replace factory sights with on more recent service pistols. The S&W S&W 4506’s shrouded adjustable sights, on the other hand, are some of the only service-worthy adjustable designs ever fielded. Both sights avail the user of the pistol’s full accuracy. We shot two-inch groups at 25 yards with both guns, but felt doing so was slightly easier with the .45. We also couldn’t find a pace at which it became anything but instinctive to put an entire magazine into an eight-inch circle at seven yards.  Comparing the S&W 1066 to a Glock 20SF, the S&W 1066 has unquestionably better accuracy. Back-to-back magazines through the respective firearms make the Smith’s trigger advantage difficult to ignore, and the heavy frame soaks up recoil at least as well as the lighter but more flexible Glock. The S&W 4506 stacks up well against a limited production 1911, although its trigger is naturally less jaw-dropping when compared to a high-dollar semi-custom. But even against a tuned and expensive 1911, the S&W gives up little, and, dollar-for-dollar, few makes could compare to these. These guns are heavy, accurate, easy to shoot well with, and comfortable to use.

Sadly, the S&W auto has one big downside: they are no longer supported by the manufacturer.  Parts aren’t being made, and customers with broken autos are directed to S&W’s M&P line.  This decision, which we call The Great Abandonment, took place in early 2014, and while we can understand that S&W didn’t want to spend eternity maintaining stock on guns they no longer sell, it’s a bit of a shame since these pistols are just so shootable. Those of us who thought we’d be saved by ongoing agreements with the RCMP and NYPD (S&W 5946), the LAPD (S&W 4566), and the California Highway Patrol (S&W 4006) are out of luck. The venerable guns were victims, in many ways, of their own quality and versatility: they were expensive to build and required too many individual parts. These factors drove up prices in an era when plastic people poppers were really taking off and 1911s survive on pure nostalgia. 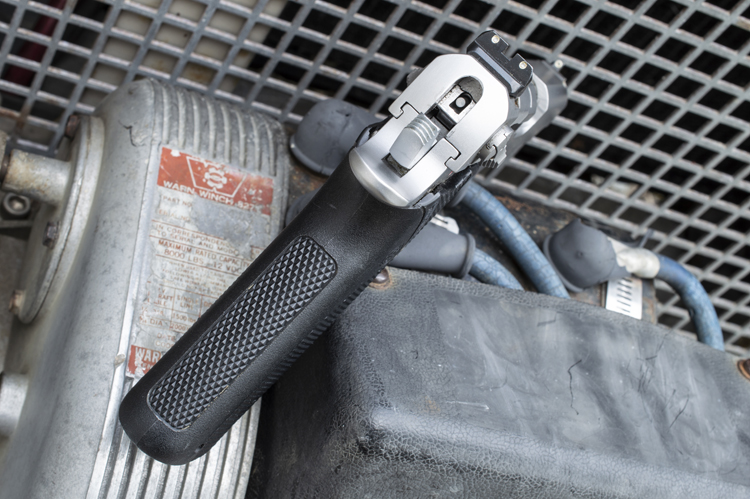 Despite being a modern design backed by a major manufacturer with deep pockets, a long history, and superior quality control, the well-built S&W is gone. Meanwhile the universally manufactured 1911, with its expired patent, lives on, despite the reliability factors of most manufacturers’ builds. As such, we can’t recommend these S&W third generation pistols as high-volume beaters. Despite that one of our more famous colleague’s recent 2000-round, no-cleaning, no-lubricant testing of a S&W 5906, we just can’t bring ourselves to pound on these out-of-production beauties.

Still, most users won’t ever subject their guns to the kind of abuse we think is normal. If you shoot four boxes of ammo through one of these once a month and clean it periodically, it will probably last the rest of your life. And for that entire time, you will have a smartly designed, beautifully machined, attention-grabbing, soft-shooting block of old school cool. These guns’ secondhand prices hover not too far north of $1000 but won’t stay like this forever, so if you’re thinking of adding a classic to your collection, we’d advise you not to wait.